XC60 is a pinnacle achievement for Sino-Swedish carmaker, Volvo

Admitting that he has tired of the myriad SUVs hitting our roads in recent years, Iain Robertson confesses that the Volvo XC60 is responsible for a complete turnaround in his perceptions and he would gladly drive an example for the rest of his motoring life.

In conversation with a good friend recently, who is around 20 years my junior, I was very conscious of how his musical tastes are not really even remotely similar to mine. Yet, as we drove, the Johnny Walker ‘Sounds of the Seventies’ show was playing on BBC Radio Two. Although I would have normally rowed-up the volume, with deference to him, I turned it down, but his reaction was both surprising and rewarding.

Despite his love of ‘acid house’ and even rap, he asked that I return the car stereo’s volume to a more audible level. He was more than aware of the music of that period and appreciated its iconic value, especially to modern musicians, stating further that, without such innovative sounds, he would not fully comprehend the music that fascinates him so much today.

It is interesting that we were driving in the latest Volvo XC60 in D4 AWD R-Design form. While the popular music of today is peppered with sounds and noises that can make me quite bilious, it is largely anodyne in its construct and lacks any stand-out production values, even though the technology is available at even higher standards than ever. Intriguingly, I have found the multitudinous choice of largely anodyne SUVs to be as confusingly ignorable as most recent music. The parallels are remarkable.

It is advancing years that turned me away from being a confirmed Radio One listener around twenty years ago to becoming a Radio Two aficionado, although it is interesting to note that the station (both of them, actually), which is 50 years old this year, has moved surprisingly well with its audience’s tastes. It is the nation’s ‘most listened to’ channel. 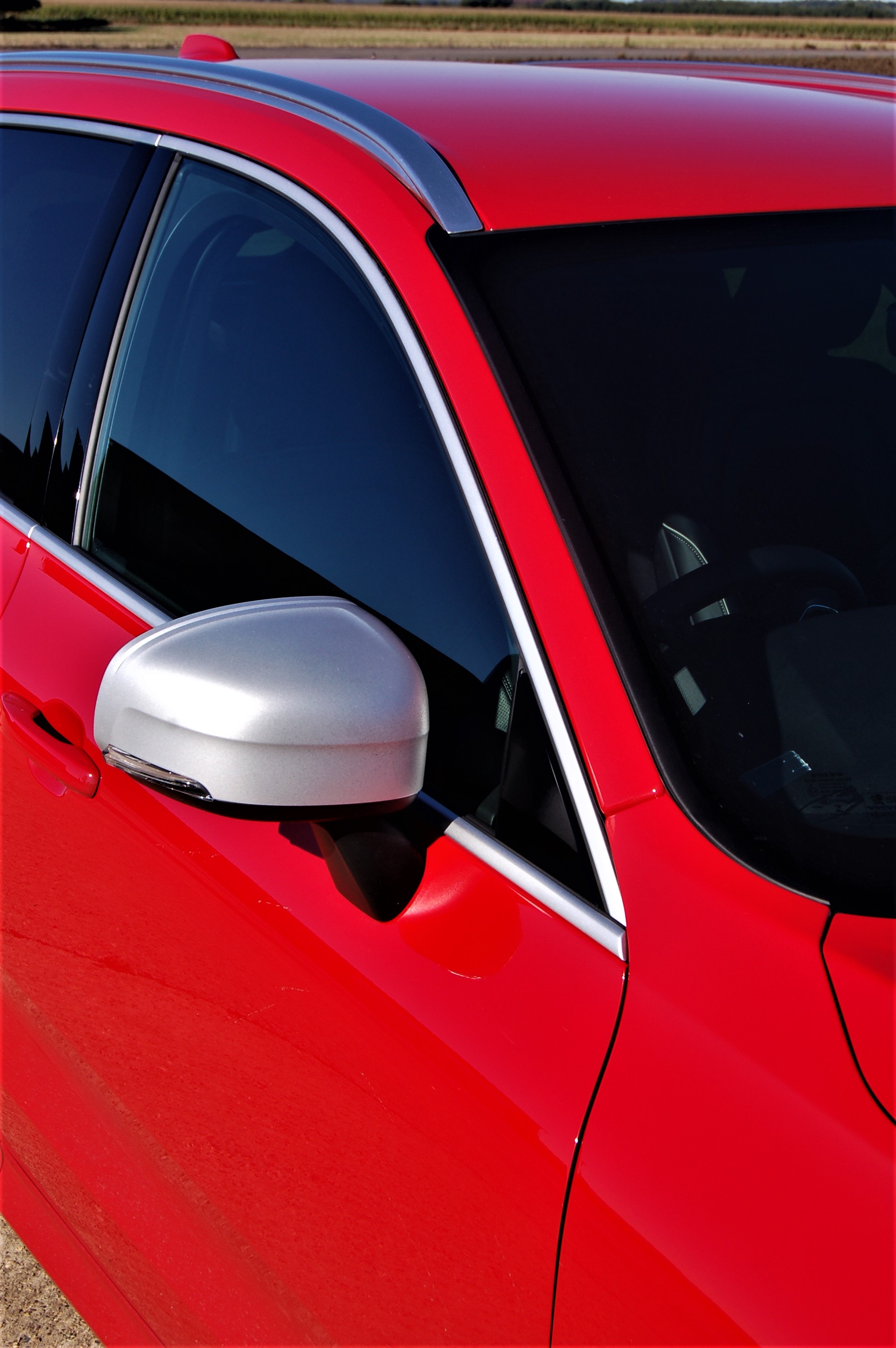 When the first SUVs began their shaky market introductions around thirty years ago, they were the antithesis of the punk rock, hot hatch era. Today, for a car manufacturer not to be producing an SUV of some description is considered to be the next step in its downwards denigration. It is why modest volume, luxurious Bentley produces the utterly awful Bentayga, self-destructive and largely forgettable Alfa Romeo the Stelvio and sporting but eminently ‘lost’ Maserati the Levante. SUV, whether in ultimate, land-bruiser, all-wheel-drive, or ‘soft-roader’ front-driven forms is as much ‘new normal’ as BBC Radio Two, offering as broad a range of choices, it is the family saloon car of the 21st Century.

So it was, just a few months ago, at its launch, that I drove the latest Volvo XC60 in various engine and trim guises and declared that I was smitten by its beguiling and inherent safety-laden qualities. So smitten, in fact, that, were I to have the available funds to acquire a new XC60, I would not think twice about my choice and would opt for a neatly personalised version to meet my everyday driving needs. It would seem as if SUV is my current market heading, which is not merely a sea-change but also suggests that the ‘new normal’ is engaging with my psyche. The nagging doubt remains, of course, that it might simply be force majeure that is having the maximum ‘drip-drip’ effect, a procedure now banned by ‘right thinking’ administrations in dealing with its terrorism-inclined, orange boiler-suit wearing prisoners!

While not orange, the Passion Red XC60 that I have been testing incorporates that photogenic quality so essential to making test reports more palatable. It takes snaps well. Fortunately, it is also quite well pitched in price terms, the XC60 line-up starting at a moderate £37,205, to which you must add £2,500 for the AWD D4 R-Design trim, which happens to be the most popular, ordered format. In typically Teutonic form, the personalising addenda factor in £1,500 for the Intellisafe Pack (driver assist, adaptive cruise, BLIS – blind spot, cross-traffic alert and rear collision mitigation). You will require another £525 for the Winter Pack (headlamp wash, heated front screen, heated steering wheel, heated front seats and heated ‘Aqua Blades’)…the latter of which I should like to stick with for a moment. 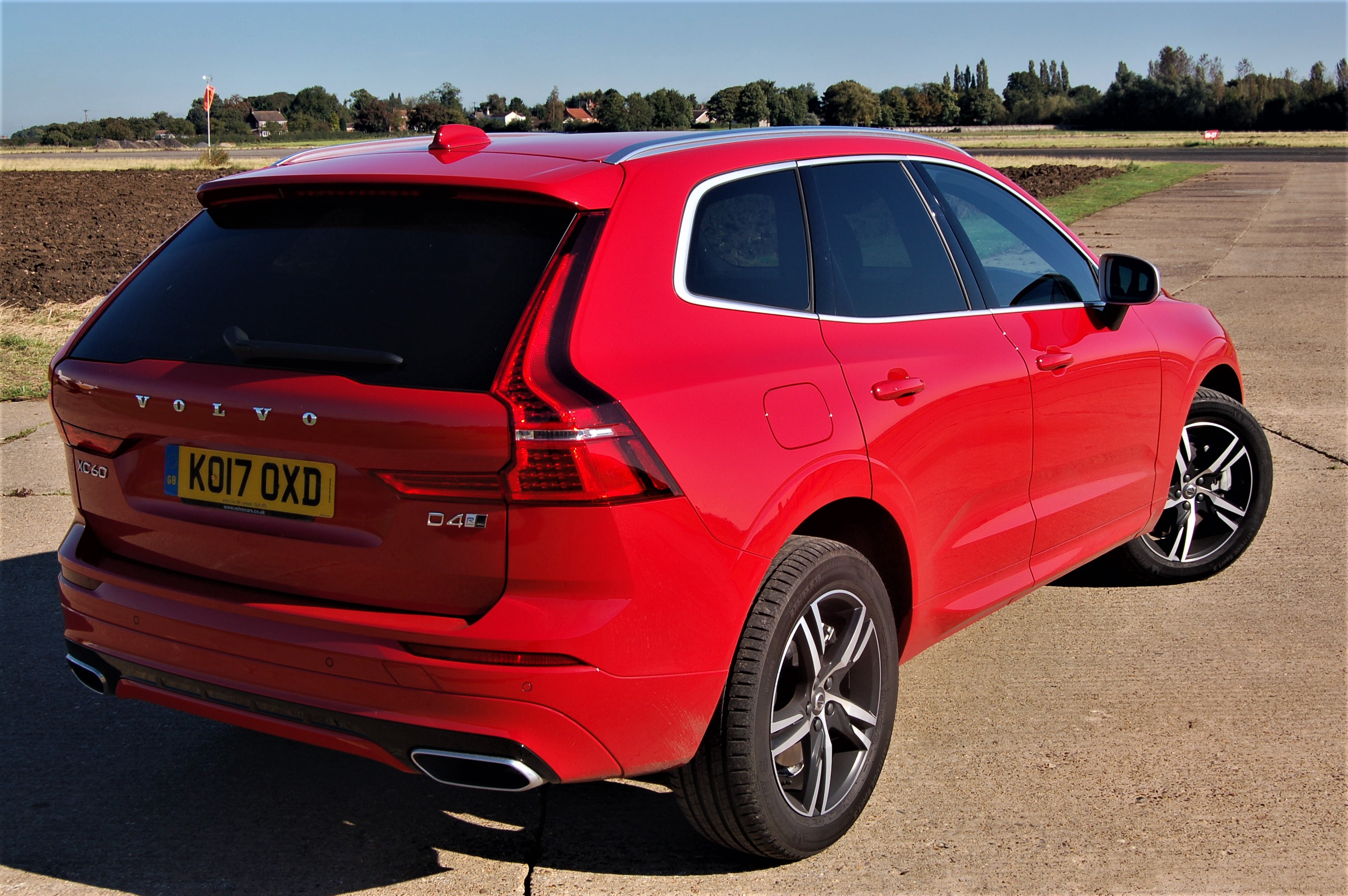 Volvo is not unknown for being a genuine automotive industry innovator. Renowned for its orthopaedic seating, daytime running lamps and three-point safety belts, its latest windscreen wiper development needs to be included in its long list of broader, safety-enhancing benefits. Known as AquaBlades, which are produced by French automotive specialist, Valeo, in conjunction with Volvo, they feature water jets running the full-length of the blade, spraying water directly onto the windscreen. They incorporate an electronic sensor and heating element to ensure that they remain usable in any season. While Volvo is the first customer, they will become available increasingly from other brands. The primary safety is fantastic.

To be fair, I do have some issues related to which brand of washer additive should be used and whether, or not, I need to have a bottle of ‘Mr Muscle’ on standby (as I do in my domestic shower), to clear the salts added to our water supply that will block the micro-jets. Due to its ‘instant wash’ process, it is not very good at clearing dehydrated bird-poo from the screen, which obviates the 50% claimed water saving, although XC60 (and all future) Volvo operators will not be cleaning the windscreens of the vehicles behind. I will have more for you on the subject of AquaBlades in the near future.

The test car was also equipped with smartphone integration (+£300), Volvo ‘On Call’ app (+£550), rearwards facing camera (+£375), front park assist (+£325), keyless start and hands-free tailgate operation (+£500) and a temporary spare wheel, which does rob some useful under-floor storage. As tested, the car tips the financial scales at £43,930, which is highly competitive with the XC60’s rivals; the Audi Q5 being a lot costlier, with the Merc GLE just behind it and the BMW X3 at a similar level. To equip a Jaguar F-Pace to the same standard as the Volvo will add another £10k to the bottom-line…a sobering thought. 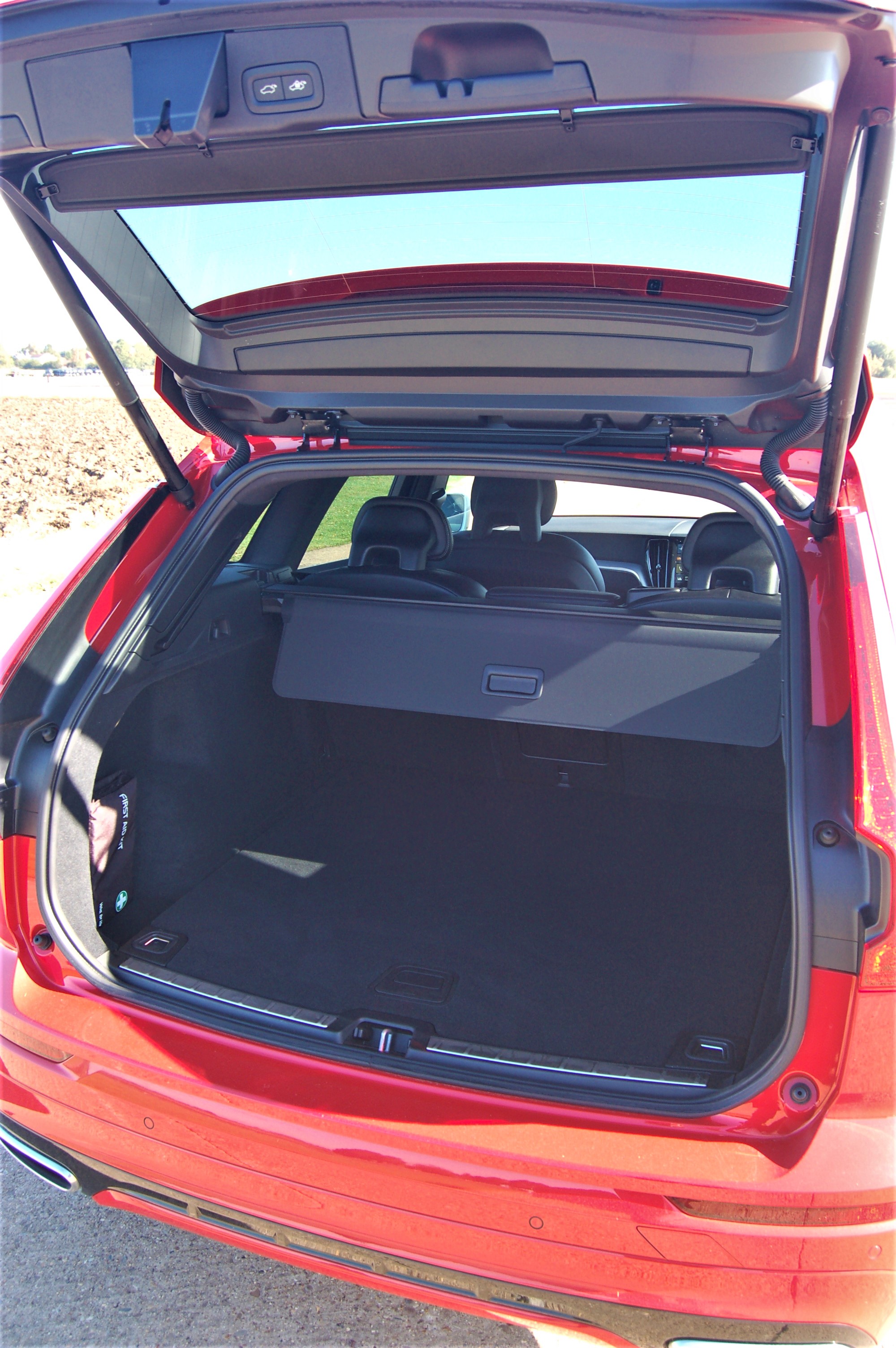 Beneath the Volvo’s shapely bonnet is the mid-range D4 turbo-diesel engine. Part of the brilliant 2.0-litre displacement family of self-built Volvo power units, it kicks out a practical 190bhp and 295lbs ft of torque, more than enough for an up to 2.4-tonnes braked trailer weight. Without a caravan on the back, the XC60 delivers a top speed of 127mph, despatching the 0-60mph sprint in around 7.9 seconds. It is aided by an 8-speed automatic transmission that slushes between ratios effortlessly. Its 136g/km CO2 rating means a first-year road tax fee of £200, with £140 annually thereafter. Although quoted at 54.3mpg (on 19-inch alloys) for its Official Combined fuel figure, the actual return is an average of 38.6mpg, as screwing a few extra miles out the tank demands real precision and throttle consciousness, which is not so bad, when offset against a kerbweight of 1.8-tonnes.

While you might recoil slightly at its fuel consumption, there will be no complaints from within the car. Its easy-access cabin is spacious enough for five adults, with bags of room up front for over six-footers. The manual front seats are absolutely wonderful, featuring sporty, electrically adjustable bolstering that hugs in the hips and supports the shoulders (the height adjustment is also electric), while manually-adjustable thigh supports extend comfortably for occupants with longer legs. The centre console contains two storage slots, within one of which are the drinks-holders and a plug-socket; a USB port is located beneath the centre armrest. 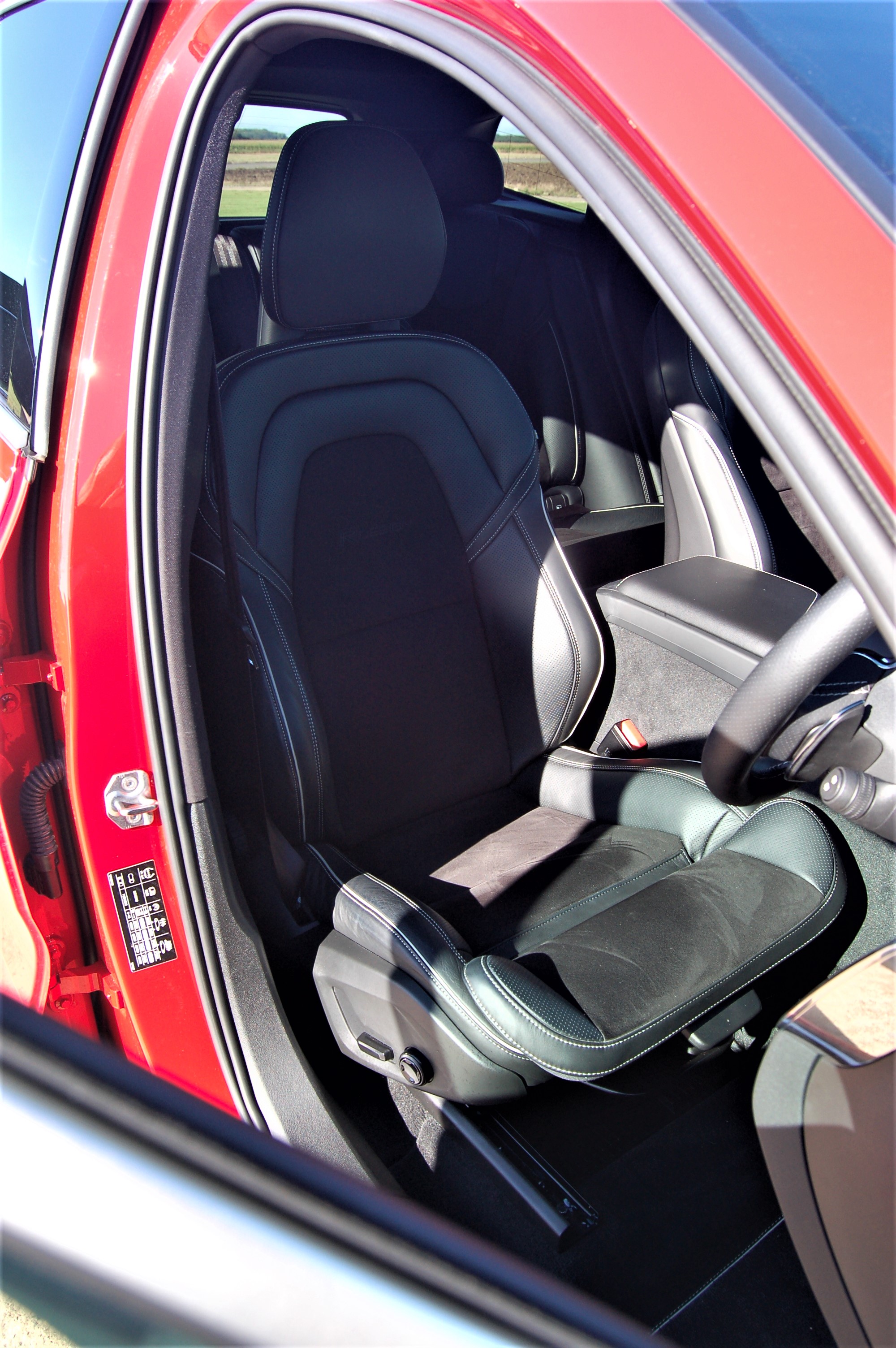 Volvo’s dashboard designs are paragons of clarity. The TFT instrument panel, which can be configured according to the information to be displayed, sits within a binnacle directly ahead of the driver, with a portrait-format touch-screen in the dash-centre. Now significantly more logical to operate, from its touch and slide movements, the sat-nav, hi-fi, climate and fuel status can be accessed with a tap of a finger, other controls can be delved into by sliding the screen-shot either left, or right (like a mobilephone). The surrounding dashboard moulding is soft-touch, with thin foil highlights adding depth, tactility and character. There is even a small Swedish flag ‘ingot’ set into the left-hand side of the metal trim, an aspect reflected in the yellow-and-blue flaglets stitched into the upper side-bolsters of the hide and Alcantara upholstered front seats. 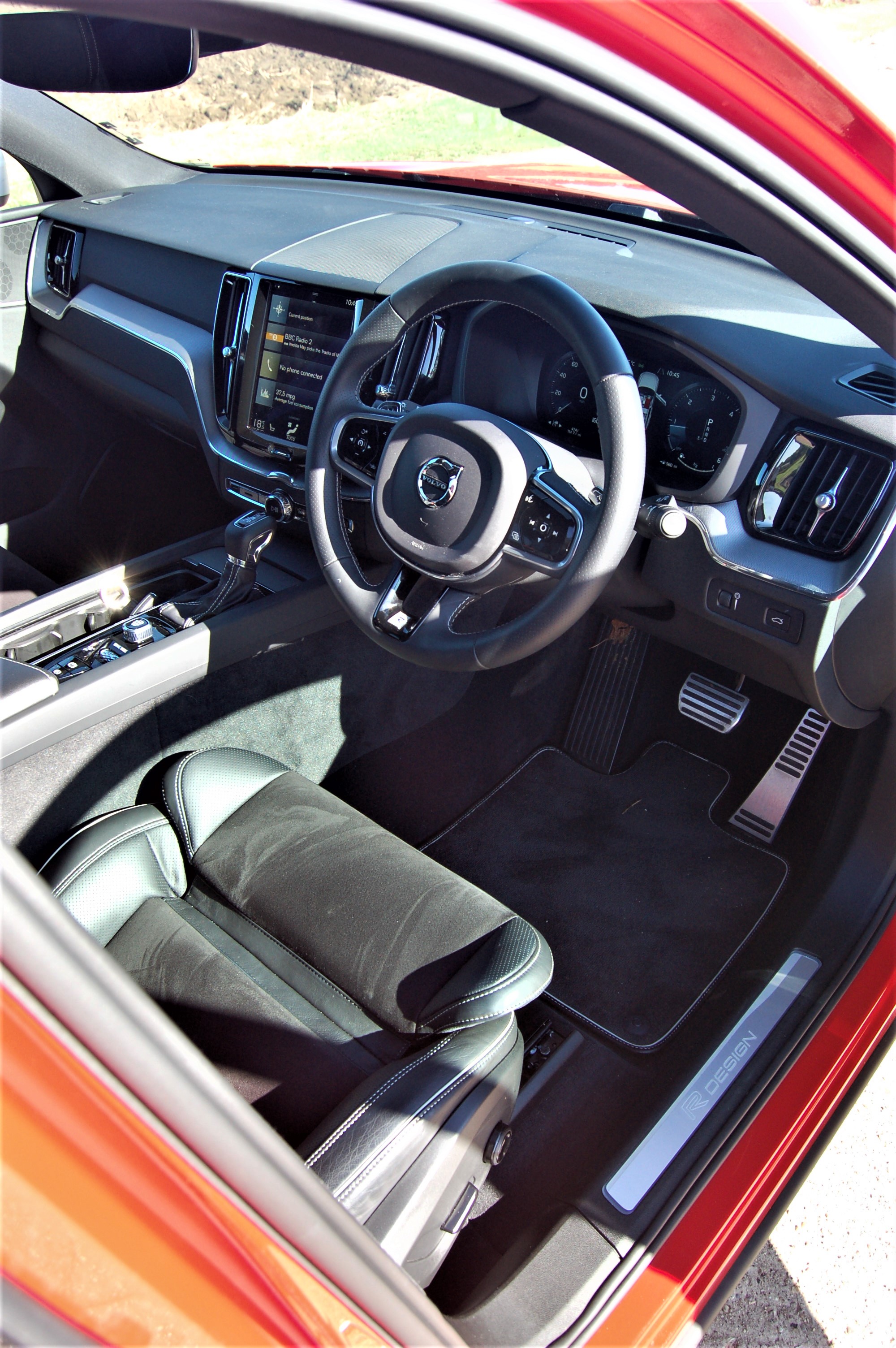 While I am not a fan of LED headlamps, those of the Volvo feature an active and effective high-beam setting, the LEDs separated by another example of the ‘Thor’s Hammer’ DRLs that create the front-end lighting signature. The ‘Horbury-shoulders’ (named after the company’s design boss) at the rear are illuminated in red LEDs. The spread of illumination is not bad at night-time, although the definition immediately ahead of the car is lacking slightly, whether on dipped or main beams.

Located just behind the beautifully knurled twist-to-start knob is a roller switch that activates the four-way damper settings: Eco, Normal (for everyday use), Dynamic and Off-road. Like all of the other Volvo controls, they act with fluency and a reassuringly positive and high-end click. There is a discernible difference between all of the settings (which makes a change) and the XC60’s ride and handling can be best described as excellent. Its steering is responsive, nicely weighted and features a delightfully tight turning circle, which makes the car very easy to park, although the on-road turn-in is crisp and sportscar-like. 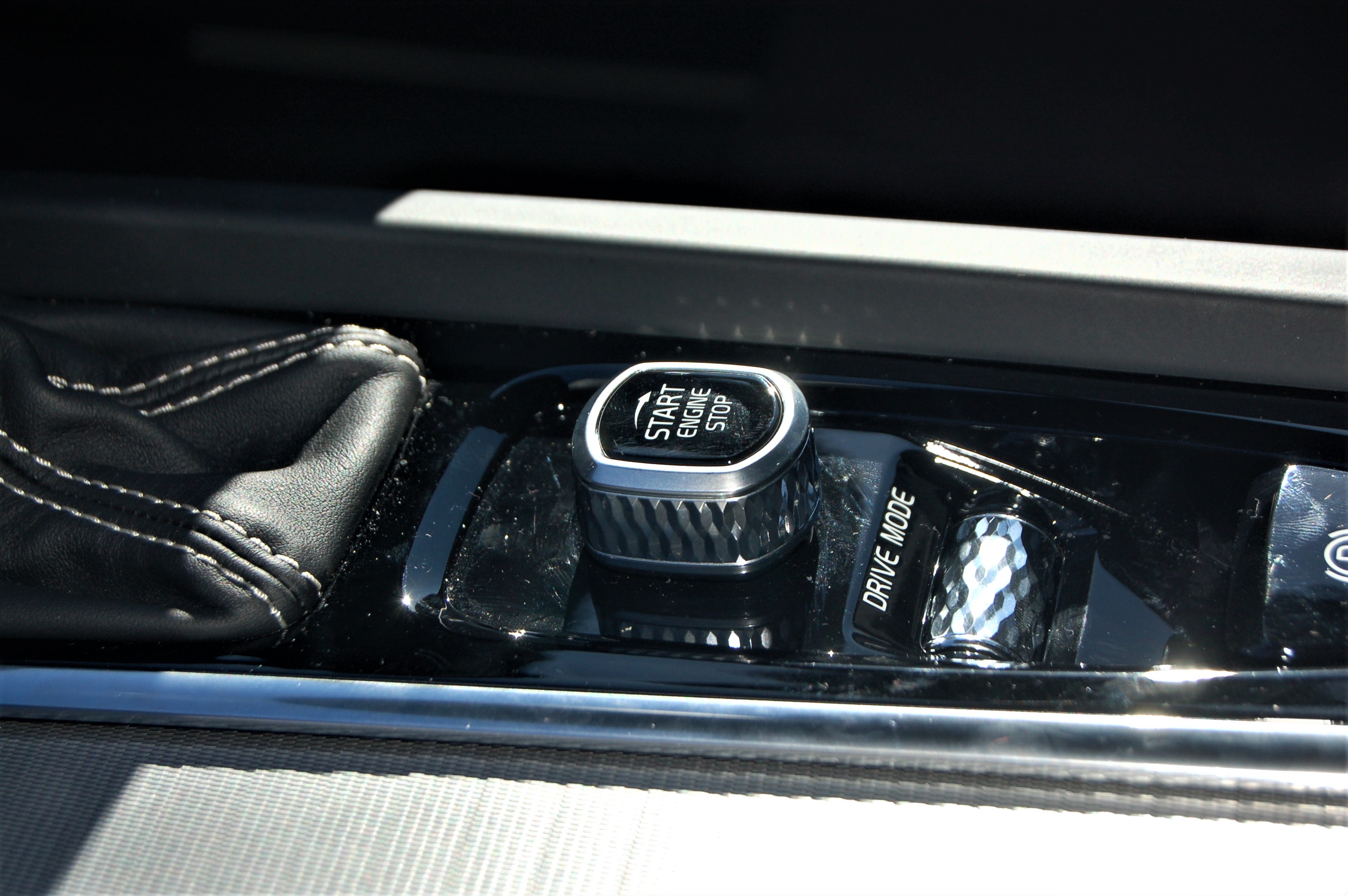 Volvo has created a truly superior mid-range SUV in the XC60. Exceedingly good looking, with tight shut-lines and impeccably balanced detailing, it is a car that presents tremendous appeal to potential customers. The previous model was a good seller for the brand but the new one is set to perform even better. There is a fine reason for it: Volvo has skipped at least one generation in producing this new car, which means that ALL of its rivals have a monstrous task ahead of them to beat Volvo at the SUV game. I need to start earning a bit more money to own an example but, by heavens, it is a car that I truly desire for my future motoring.