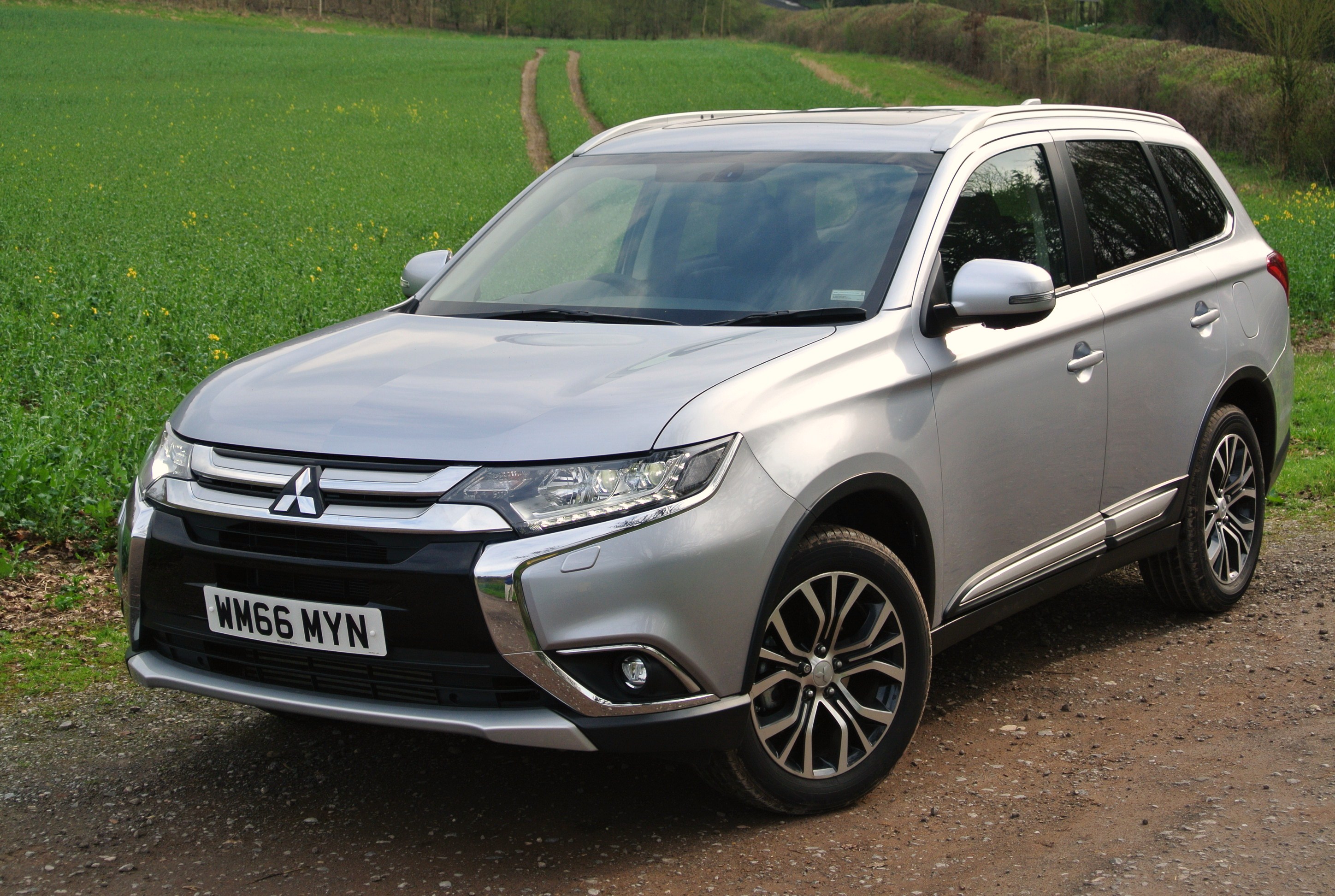 Inundated with the latest SUV models and their associated high-tech addenda, Iain Robertson admits to enjoying the ‘Old Skool’ appeal of the current Mitsubishi Outlander, although living with its high fuel consumption is something else altogether

Having gained my first taste of Mitsubishi-ness back in the mid-1970s, when its models first arrived on our shores from Japan, I harbour a genuine respect for what the company once stood for, even though its current stance has been watered down by a failed relationship with the equally failed DaimlerChrysler Corporation. In those early days, which were also early for the majority of oriental brands, the first Daihatsu, Datsun and Toyota models only gaining a teensy toehold in the previous decade, Mitsubishi was often thought of as a Japanese BMW, such was the first-class quality of its cars.

When its Shogun first appeared and commandeered the all-new SUV segment of the 4×4 scene, Mitsubishi, which was still being operated as a private concessionaire in the UK (The Colt Car Company; it is now a subsidiary of the Japanese owner), grew like Topsy and generated a raft of dedicated customers, all of whom loved the indomitable build quality and high engineering standards inherent to the brand. However, by the mid-1990s, its immense parent company realised that its miniscule car producer, by comparison, was something that it really did not comprehend and sold it to the entrancing and acquisitive Merc-Chrysler combine, which sadly screwed it up comprehensively.

Although the GS platform that underpinned the forebear to the current Outlander, which is now built on a lighter but largely identical GF platform, was designed during those troubled years and fostered a range of models that bore Chrysler, Dodge, Jeep, Peugeot, Citroen and Mitsubishi badges, it is almost too easy to ignore the fact that the rally-intended Lancer Evolution X was also born at the same time, on the same platform. It is this latter model to which we must nod for its blend of prodigious chassis dynamics that make the current Outlander an astonishingly excellent driver’s car. 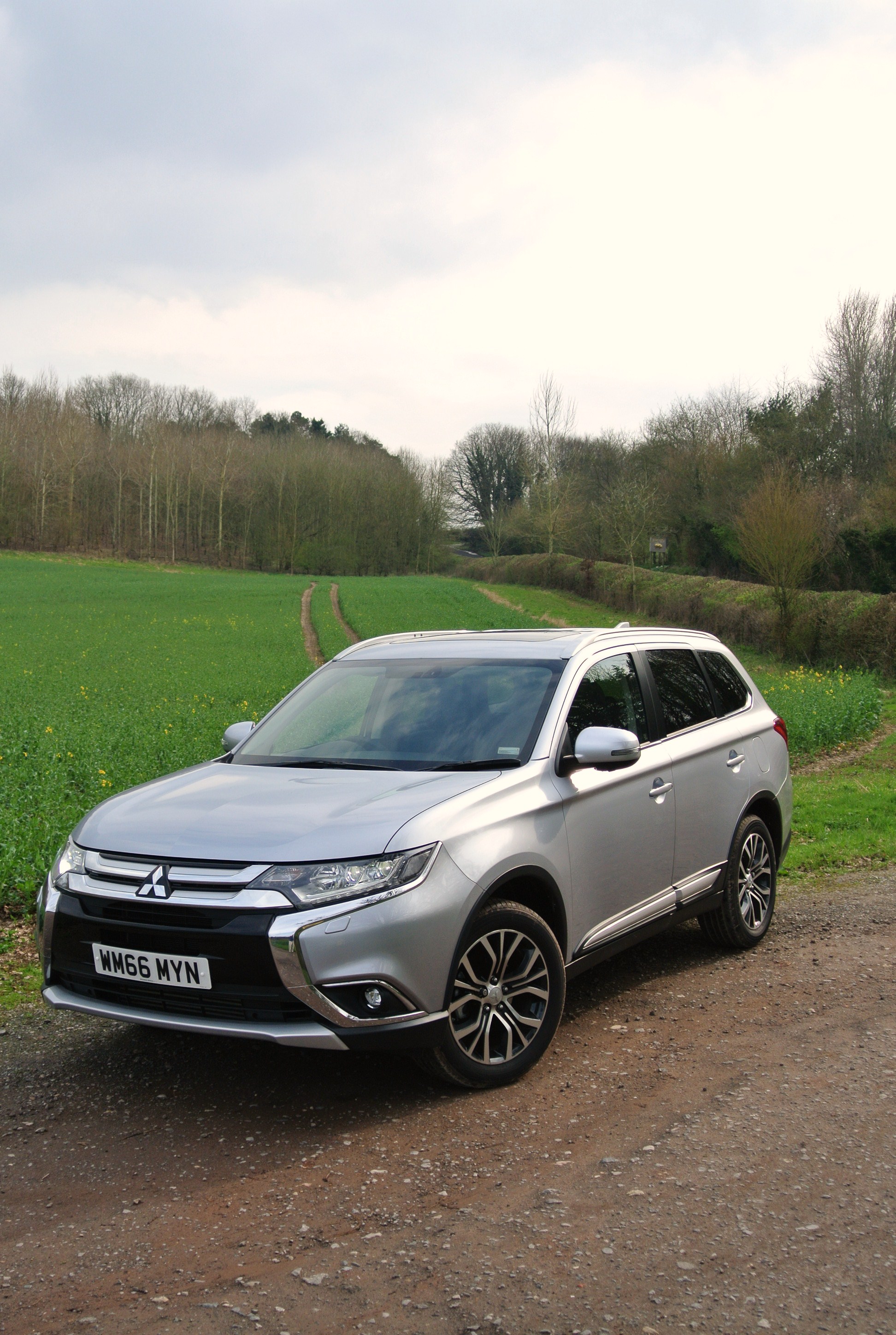 Even in the turbo-diesel guise of the test model, which is so outshone by its well-publicised and market-leading PHEV alternative (now available in ‘plug-in’ form too) and, therefore, becomes eminently forgettable alongside it, the Outlander remains not only competent but exceedingly engaging to live with. The problem is, potential buyers do not know about it! Mind you, with the present ‘outlawing’ of diesel fuel by both government and clean air bodies, apart from some professionals and the farming community, it could easily become a ‘lost’ model anyway, which I feel is a genuine pity.

Powered by the company’s own 2.2-litre, four cylinder turbo-diesel engine (not related to the PSA lump), it develops a modest 147bhp at 3,500rpm and a handsome 280lbs ft of torque between 1,750 and 2,500rpm. However, motivating over a tonne-and-a-half of mild barn-door aerodynamic hardware does command penalties at the pumps, as was proven by my regular and disappointing return of around 35.5mpg, which was soon reduced to 29.6mpg, as I really got into chucking the estate car around the back-doubles with great abandon. Mitsubishi’s main rivals can run rings around it in the eco-stakes, even though its exhaust emits a mere 154g/km (manual: 139g/km) of CO2.

Modest though its output is, grasp the Outlander by the scruff of its neck and it delivers a dose of superior ‘WOW-factor’ that will have most driving enthusiasts baying for more. Those Evo X underpinnings pay handling bonuses in abundance, even though they were devised almost a full generation ago. In fact, it is this feeling of ‘Old Skool’ that pervades the Outlander proposition. While the top-spec version (4) on test features a number of more recent safety innovations, such as LED headlamps, rear cross-traffic alert, blind spot warning and a 360-degree camera system, it is lacking in lane-change and anti-swerve technology, even though it does have an advanced stability control that includes yaw control.

To the type of person who fears the arrival of autonomous motoring elements, this translates into a bundle of enchanting fun. Outlander D, unlike its PHEV sister, can be barrelled into bends with some aplomb, full in the knowledge that, while it might get a bit crossed-up (notably, when the ESP is switched off), its reserves of handling competence take over and more than compensate the driver. The spring and damper rates are matched beautifully to ensure that pitch and dive are controlled, while body roll is minimised to allow the steering to retain a high degree of accuracy, at the same time imparting minimal misinformation to the driver’s fingertips. The amount of mechanical grip is outstanding, which provides immense confidence to the driver, especially when pressing on a bit. 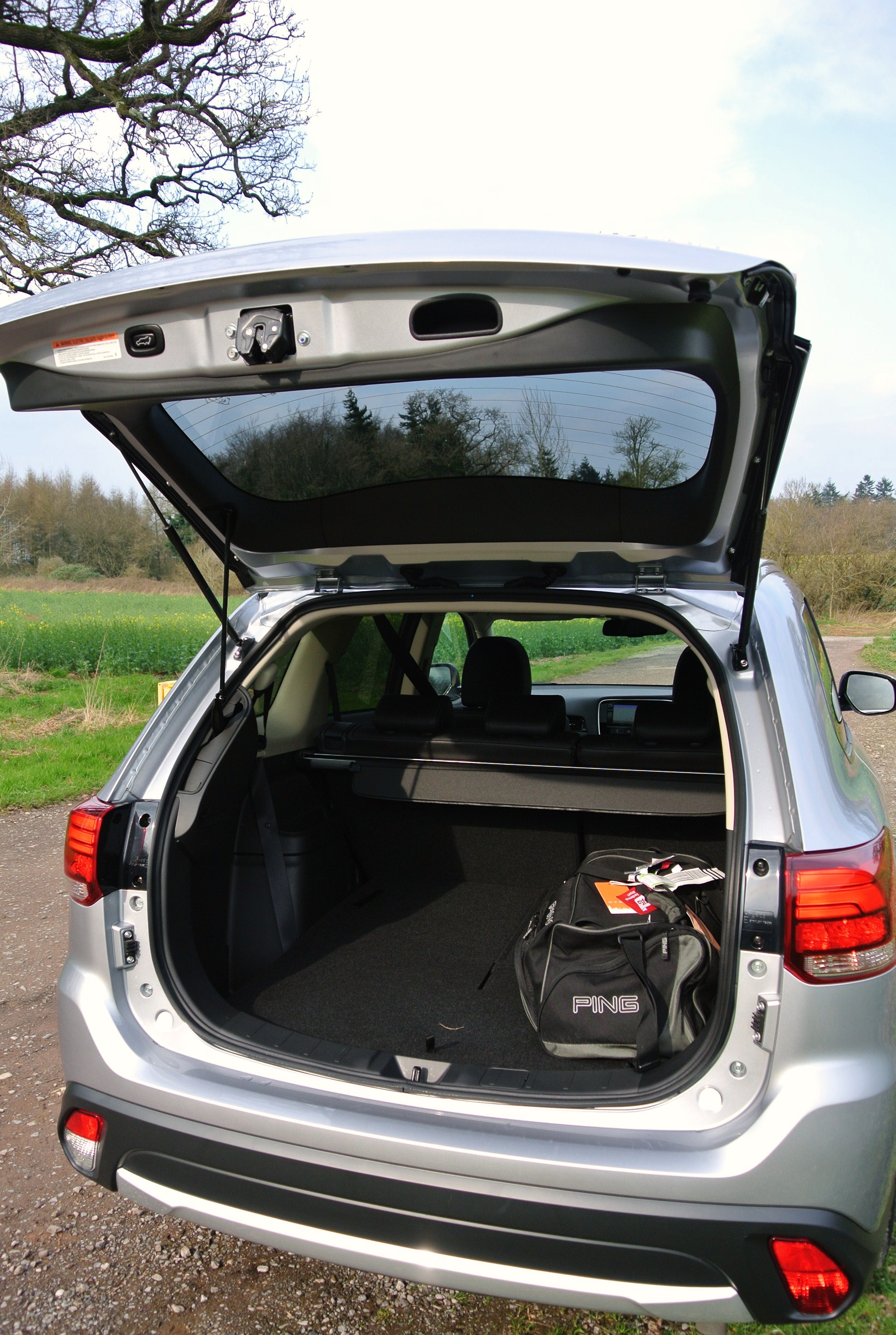 Its cabin is spacious and practical, with a decent boot, power accessed via a pushbutton on the lower right of the dashboard, or the car’s remote control fob. Within the boot is contained a pair of pop-up passenger seats that inevitably dispense with luggage room, when they are erected. Accessibility to them demands a fair amount of agility, even using the slide control of the middle row of seats, which makes them suitable only for a couple of children in reality, although they are properly sprung. The rest of the cabin is certainly accommodating for up to five adults, with plenty of leg and headroom.

The dashboard consists of a large, ‘soft-touch’ moulding, within which is set a driver focussed centre console, finished in what the brochure describes as ‘black ash’, hinting at wood, although piano black plastic is nearer the mark. While the main dials ahead of the driver are clear enough and the LCD touch screen caters for most functions, it is in the connectivity aspect that the Outlander shows its age. The problem is that the application of technology is moving forwards at a pace, at which Mitsu just cannot keep in touch. The sat-nav is a case in point, being both clunky to use and slow to react, feeling pretty down-market in a model that is clearly intended to be up a few notches from that. Of the minor controls, I quite like the single touch windscreen washer that squirts several jets of fluid in a pulse sequence that cleans the screen very efficiently.

However, the rest of the minor and major controls all fall to hand, or foot, as they should and, while an electronic parking brake might not be of appeal to a lot of people, at least this Outlander can boast both hill-start assist and an auto-brake facility that means you do not have to keep depressing a rocker switch. It is combined with ‘stop:start’ technology that works effortlessly with the six-speed automatic transmission. Talking of which, it features a pair of up/down alloy paddles behind the steering wheel, or manual gearshifts can be effected by slipping the gearlever across to the left side of the gate and flicking it fore and aft instead. Regardless, it is a very good auto-box that does not seem to blunt the eagerness of the diesel engine at all.

In design terms, the Outlander looks a bit disjoint. It is a profusion of organic curviness transected by a series of straight lines that look slightly uncomfortable and at odds with each other. The new corporate face, which is known as ‘Dynamic Shield’, is said to evoke the more aggressive stance of Shoguns past but I see it as little more than an excuse to add cost-effective ‘bling’ to an otherwise ageing style, while effecting a mid-life design refresher.

It cannot be said to be without purpose, as the high-riding nature of the car, while looking a tad tiptoey, means that it is unlikely to get hung-up on the scenery, when exercising its off-road credentials. Sadly, the ECO button in the centre of the dashboard does not help reduce fuel consumption of the full-time 4×4 system in normal road operation, despite putting what feels like taut elastic support hosiery on the running gear. 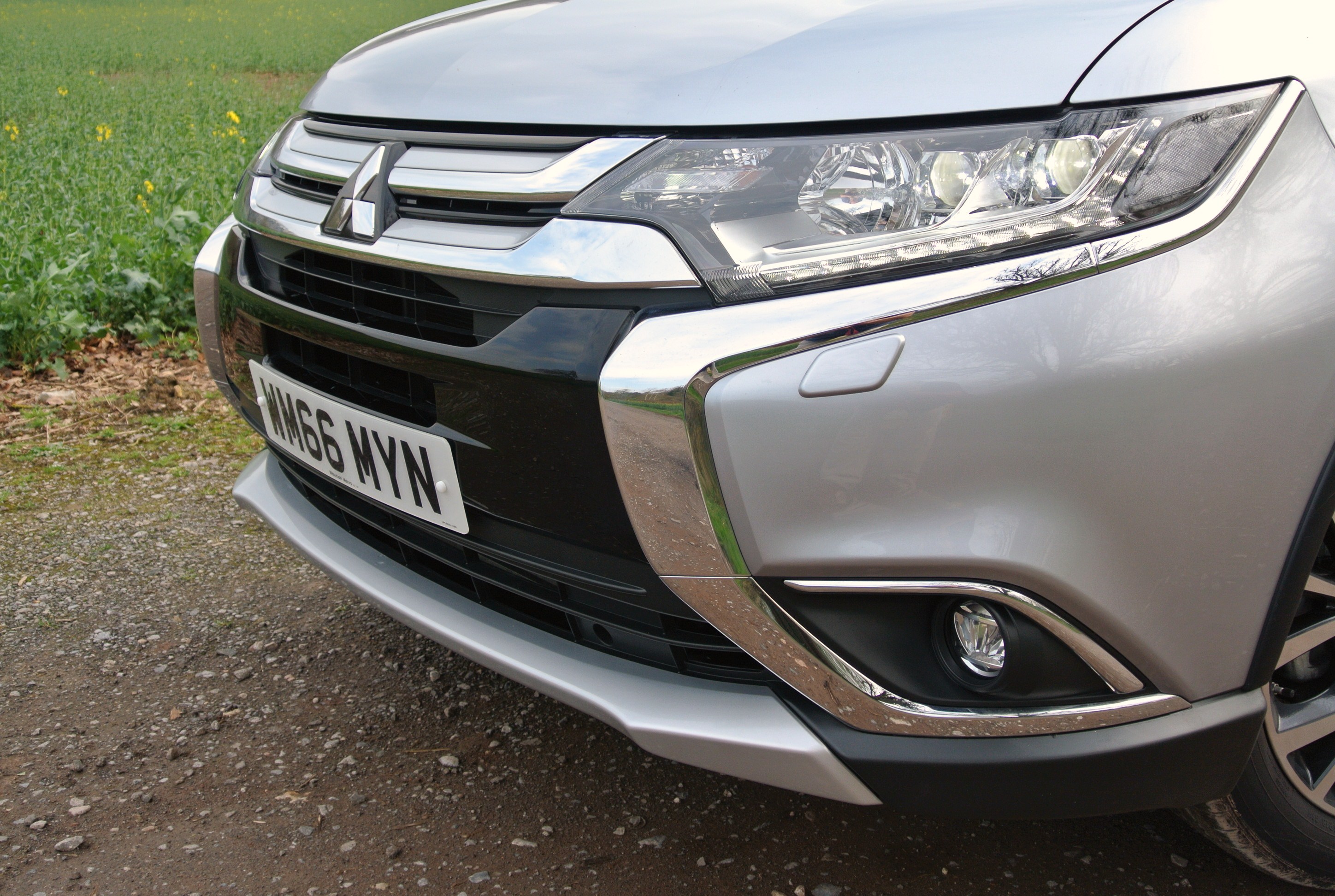 Overall, despite being an eleven years old project, the Outlander is fairly refined, as far as not allowing engine noise to intrude the cockpit is concerned, although the wind noise can be excessive, especially at the higher speeds that are such a delight to exploit otherwise. Its top speed is given as 118mph, while it can clock the 0-60mph benchmark in around 11.0 seconds, although it does feel faster, thanks to an abundance of mid-range punch. Outlander is priced between a reasonable £24,999, up to £43,499 for the top PHEV hybrid version, although this top-of-the-shop diesel weighs in at modest £33,499.

While possessing aspects that are not totally agreeable to me, I actually appreciate the old-hand approach that the Mitsubishi Outlander displays. In fact, it is what makes it a more engaging prospect than many of its more modern rivals. It is priced fairly, which is a novelty in itself, and it would meet both company vehicle and private transport needs for most people. However, dig a little deeper into the Outlander’s soul and it will reveal the heart of a sporting lion, an aspect that is eminently agreeable, to me, at least.