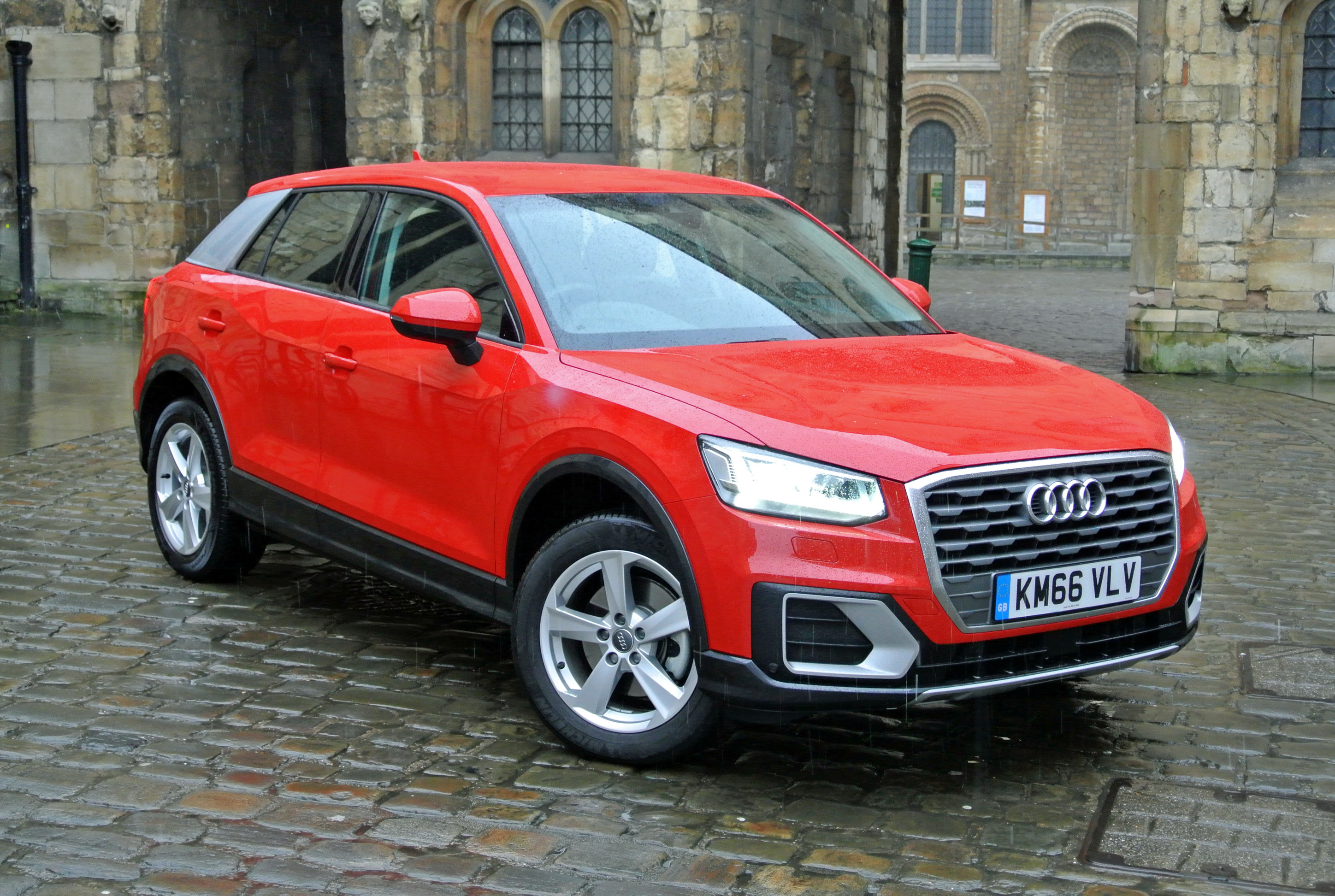 He swears that he cannot be alone in thinking that the latest Audi Q2 is a Quattro and Iain Robertson confirms that it is not, however it is the addition of a pair of oddball strakes that upsets his eye, even though the car is very good.

When I was a wee laddie, sitting at the table for dinner, I was always told by my parents, “Eat what is on your plate; do not waste it.”. To be fair, I have heard some terribly apocryphal tales from other people about a small orphan dying in Africa, the Good Lord not holding a place for them in heaven and, potentially the worst of all, that those children would not receive either Christmas, or birthday presents, all for turning up their noses at sprouts, or tomatoes, or sweet corn. I guess I was fortunate that my parents did not threaten me in similar ways.

As it happens, I grew up to be something of a gourmand. I love food of all types and my sense of adventure knows no bounds. While I would never apply force to my own children in similar circumstances, I have a tendency to view unfinished items with a combination of unuttered scorn and mild disharmony. The illustrious (if slightly mad), contemporary ‘artist’, Tracey Emin, also regarded as an enfant terrible of the British art scene of the late-1980s, shocked me with her installation piece, ‘My Bed’, renowned for its unmade and filthy appearance. All I wanted to do was make it up!

It is interesting that the now 53 years old speaker, panellist and permanent sneerer used to be supported with the supply of ‘free’ motorcars by Audi UK, a factor I never truly understood, as Audi is a brand about as far removed from punk rock influences and general untidiness as Lawrence Llewelyn-Bowen. Yet, a not dissimilar level of support was also provided to ‘The Cat with the Hat’, Jay Kay, singist and leader of Stevie Wonder rip-off band, Jamiroquai.

While I am unlikely to have any influence in such decisions, it is clear to me that an ‘Unmade Car’ has now made it to Audi’s otherwise crisply turned-out range. The Q2 features a three-quarter rear panel (or ‘blade’ in Audi-speak, which was, at sometime, regarded as the C-pillar) that, finished in Ice Silver, which designates it as a Sport variant, on an Tango Red example, looks unpainted and untidy. It upsets the eye and, while other versions have a choice of grey, or white (which would look a tad ‘Essex Girl’, I reckon), only by engaging with Audi’s extra-cost personalisation programme would you be able to request it in body colour. 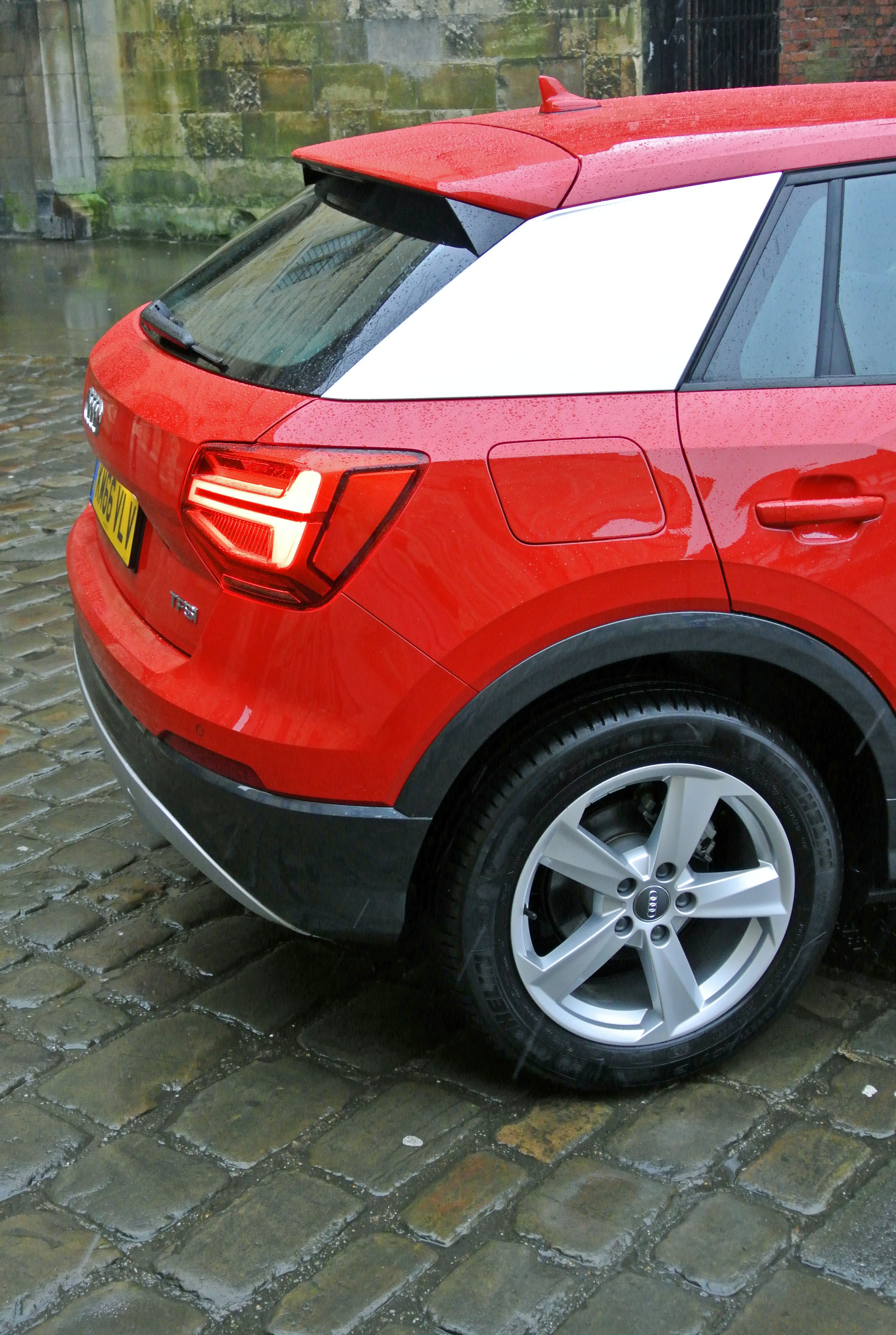 You might have thought that Audi would have dropped the ‘blade’ concept now. After all, its R8 supercar was available originally with an alloy blade that sort of connected lower to upper bodywork behind the cabin doors but, around the time of the mid-life refresher exercise had them all painted in body colour. It upset my eye at that time.

Fortunately, the rest of the Q2 is a wee stormer. Powered by the first-rate, 147bhp, 1.4-litre TFSi engine, complete with two-cylinder cut-off (a practical economy measure), which I have praised roundly in other VW Group models, it pulls like a steam train, when you want it to; cruises willingly and frugally the rest of the time; and sounds pretty sweet all of the time. Aided in the mid-range by a variable-blade turbocharger installation, it kicks out a useful 184lbs ft of torque across a broad rev-range, which means that even a press-on driver can be one ratio ‘up’ the ’box, without falling into a no-man’s-land of insufficient pull out of bends and away from roundabouts.

Naturally, stop-start technology saves a few drops at traffic signals but the two-cylinder cut-off helps the Q2 to an Official Combined fuel rate of 52.3mpg, if running on the stock 17-inch alloy wheels. It is impressive and a figure that is within the reach of most Q2 drivers, as I attained an outstanding 54.6mpg on a brim-to-brim check on my 50-mile test route. Even punting it hard, it was difficult to drop below 39mpg, which is still a satisfactory figure. Its CO2 emissions are pegged at between 124 to 130g/km (from end of March 2017 the road tax will be £160 in year one and £140 annually thereafter), again dependent on wheel diameter (18 and 19-inch alternatives are available).

Despite its eco-credentials, which some naysayers might disbelieve, the Q2 will still clock a maximum speed of a posted 131mph, despatching the 0-60mph sprint in a spirited 8.2 seconds. Yet, tipping the scales at a kerb weight of 1.26 tonnes, Audi’s insistence of lighter construction clearly pays dividends.

In typical Audi form, the interior is both welcoming and of exceptionally high quality. When I sampled the latest Kia Rio just the other week, its dashboard boasted a plank of what appeared to be anodised aluminium. It was not the case, as it was plastic. Convincing but plastic. The red crosshatched strip running transversely below the dashboard of the Q2 is aluminium alloy and it looks and feels splendid. Similarly, the circular air vents feature positive ‘click’ closures, while the column stalks operate fluidly and the instrument dials are a paragon of clarity. 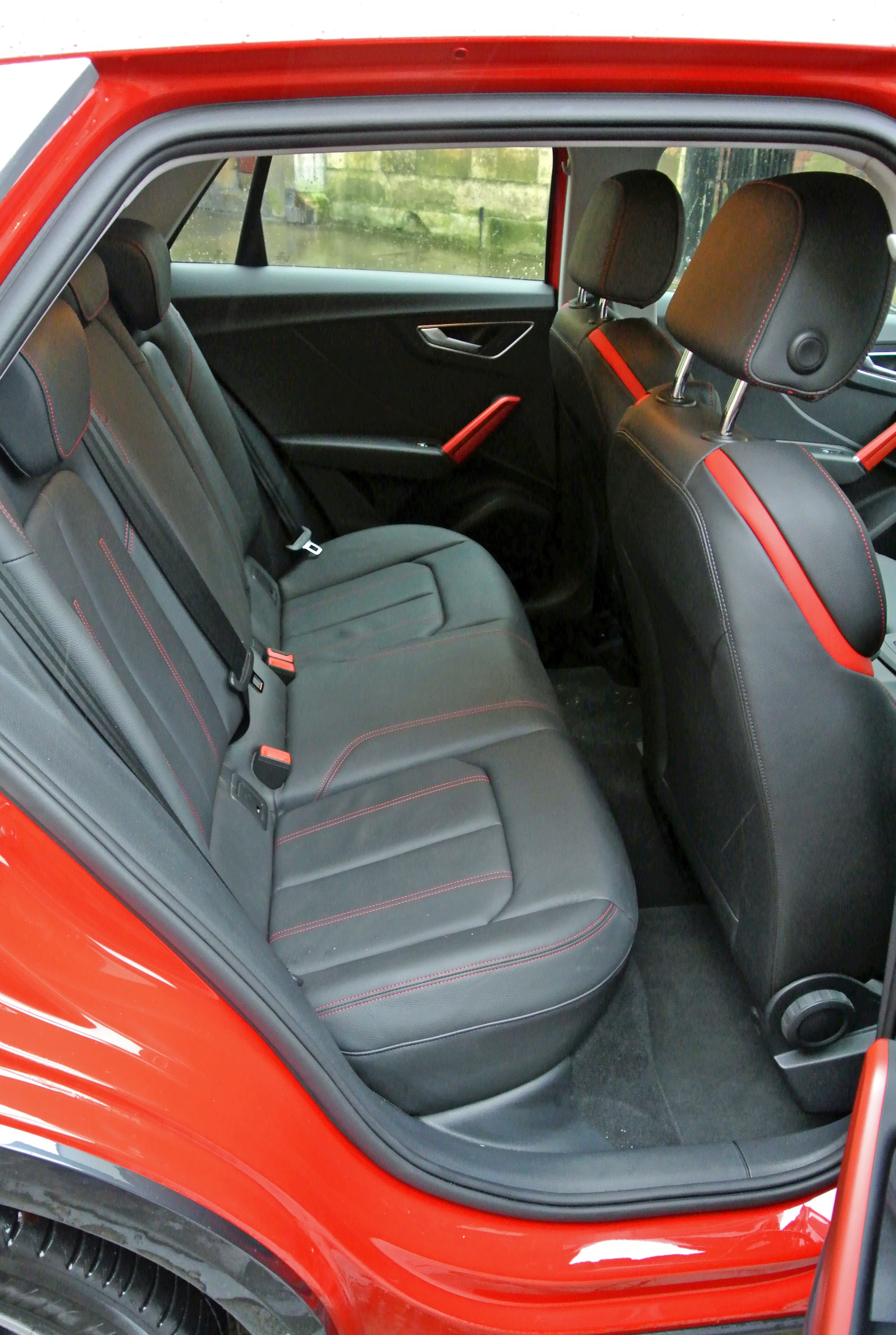 Although I can understand the point of making the screen in the top centre of the dashboard both look and feel like an iPad, it is accessed by a lovely engine-turned, metal dial placed in the correct place, within the centre console, for operation by the driver’s left hand, although the little menu access buttons require familiarity, to stop the driver from taking his eyes off the road ahead. The electric parking brake switch is located just ahead of the centre armrest.

Audi’s hide-covered seats, complete with contrasting red trim, are very comfortable and operate through a wide range of adjustment, in several planes. The red is carried onto the centre console trim strips and the lovely alloy door pulls. Space in the rear is a little compromised behind taller front seat occupants and the over-the-shoulder view can be slightly claustrophobic, although it only poses an issue to the driver glancing over his left shoulder. The boot is moderately spacious (405 litres). 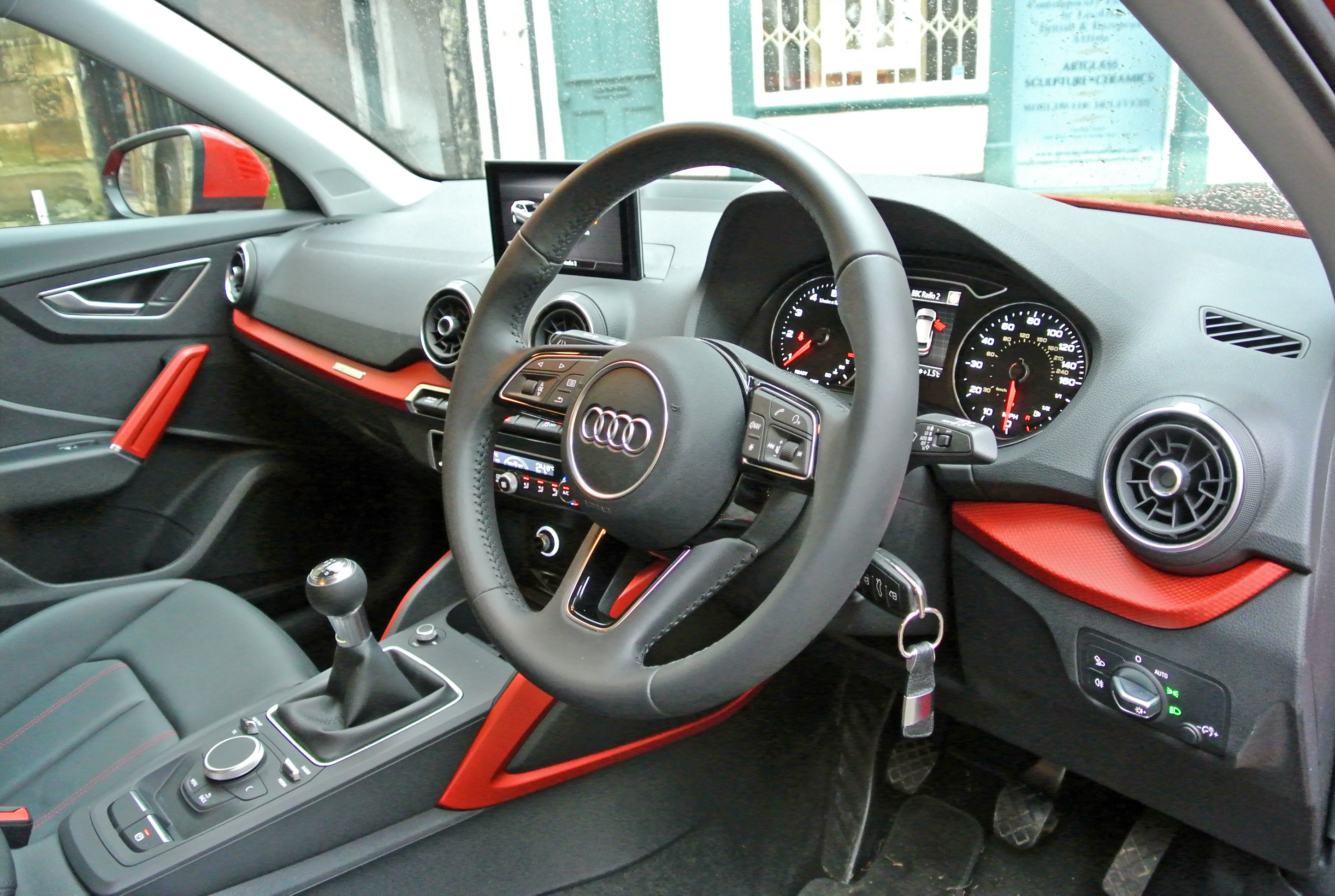 Having already highlighted the driving force behind this version of the Q2, it is worth stating how well it drives on-road. The mechanical steering responses are lovely and fluent, the car turning-in to bends crisply and precisely, effort being balanced by variable electrical assistance, although there is decent feedback and no confusion for an actively involved driver. The ride quality is firm and can be made even firmer by selecting the appropriate drive mode but the overall handling is surprisingly sporty on its ‘softest’ setting, with both body roll and pitch being exceptionally well-controlled.

Grip levels are excellent, the handling balance is neutral and the springing of the driver’s seat is clearly matched to perfection with the suspension movement, which is a rarity but one that is welcomed. The rest of the controls, a superbly mechanical six-speed manual gearbox, clutch, brake and throttle pedals, are also perfectly matched and weighted. Audi can deliver some spectacularly well-sorted cars and the Q2 slots into that classification with consummate ease. 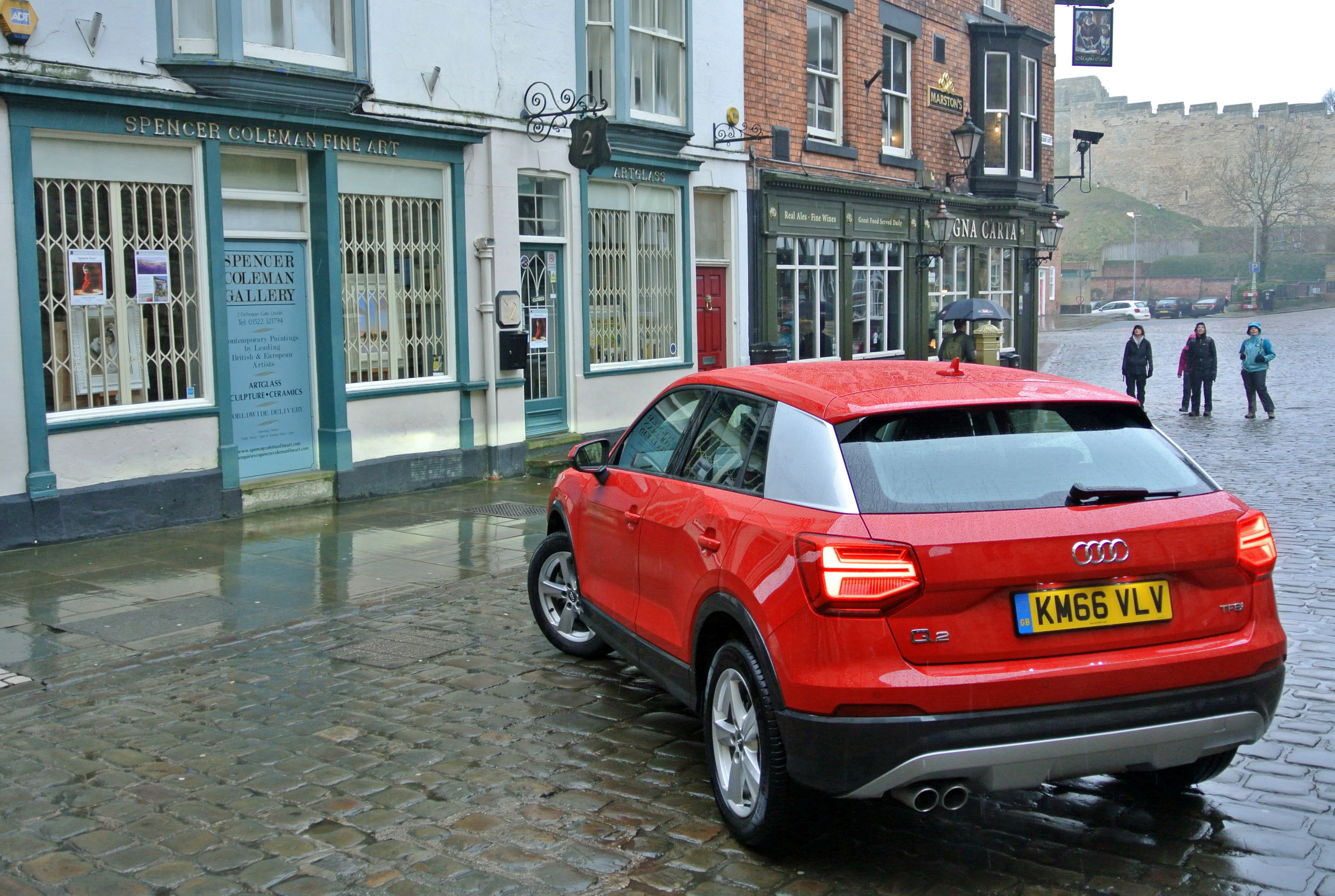 Apart from that annoying ‘strake’ at the rear of the car, I can actually find very little to criticise in the new Q2. It drives so satisfyingly well and performs so competently that you wonder what would be the point of even considering a significantly more costly Q3, whether you were in the market for a new SUV, or not. Priced at £23,715 in standard trim, which is competitive for the class, if you want it to be painted at all, you need to factor in £550, while those beguilingly supportive front seats add another £1,300 to the package.

Personally, I am not a fan of LED headlamps (+£975), preferring the Xenon-type, which provide a better quality of nocturnal illumination, although the option price does include active rear indicators and LED tail-lamps. The comfort and driver assistance packs add a further £1,625. With a couple of other items (auto-dimming rearview mirror and colour Driver Info System) the invoice bottom-line is £29,125. As ever, when ticking the options boxes on the Audi order form, you need to be careful.

Overall, the Audi Q2 1.4TFSi Sport is a very good motorcar. It carries the brand image strongly and would not look out of place in any environment, business, or private. However, it is front-wheel-driven and not a Quattro, despite the Q designation. Yet, as the market does appear to be headed in that direction and the Q2 is dynamically unflawed, it should meet demands.