Volvo monsters space, pace and grace in its gorgeous S90

While the gestation period has been fairly long, Volvo’s latest S90 and V90 variants are set for glory, reports Iain Robertson, who tackles the saloon (S) firstly…the estate (V) will follow.

Defining quality, as in a frequently tangible, warmly generous and plainly handsome manner, has become the remit of the cognoscenti. As an attribute, it has few peers. Of furniture manufacturers, the designs of Jean Bugatti, or Charles Rennie Mackintosh, remain seminal in their visual and comfort appeals. Gieves & Hawkes, from its 1 Savile Row, London address, makes business suits that are the envy of the world, while New York-based Stuart Weitzman produces shoes that grace the red carpets and catwalks of the style-conscious.

The problem with ‘premium’, whether upper, or lower-cased, is that it becomes a ‘given’, a handle that is presupposed with such superiority that observers dare not deny it. Perhaps the ultimate example of quality, within the automotive scene at least, lies with Volvo, even though the company has eschewed the premium label hefted upon it. The Swedish-based (Chinese-owned) corporation had been gifted the accolade during the mid-1990s but it was never entirely happy with the association.

As a result, Volvo’s high-ups stated categorically that it was a company that neither wished to be perceived as ‘premium’, nor to be incorporated within a market segment that was in dire straits of presuming a tad too much. I applauded Volvo at the time and continue to do so, because it is a determinedly, perhaps even staunchly, independent player that ploughs its own furrows and most assuredly does not need to lean on a descript that allows slackness and dissent to enter its ranks.

Thus, the longer, wider and lower S90, an all-new, grander than S80 and more credible contender in the large car category, enters the market on something of a roll. Just in street presence alone, it looks the part and enables Volvo to continue along its well-considered brand development pathway. Complete with a refined and very masculine new corporate logo emblazoned across its acutely concave front grille, the S90 embodies class, image and quality in spades, all without resorting to a sub-educational means of enhancement. 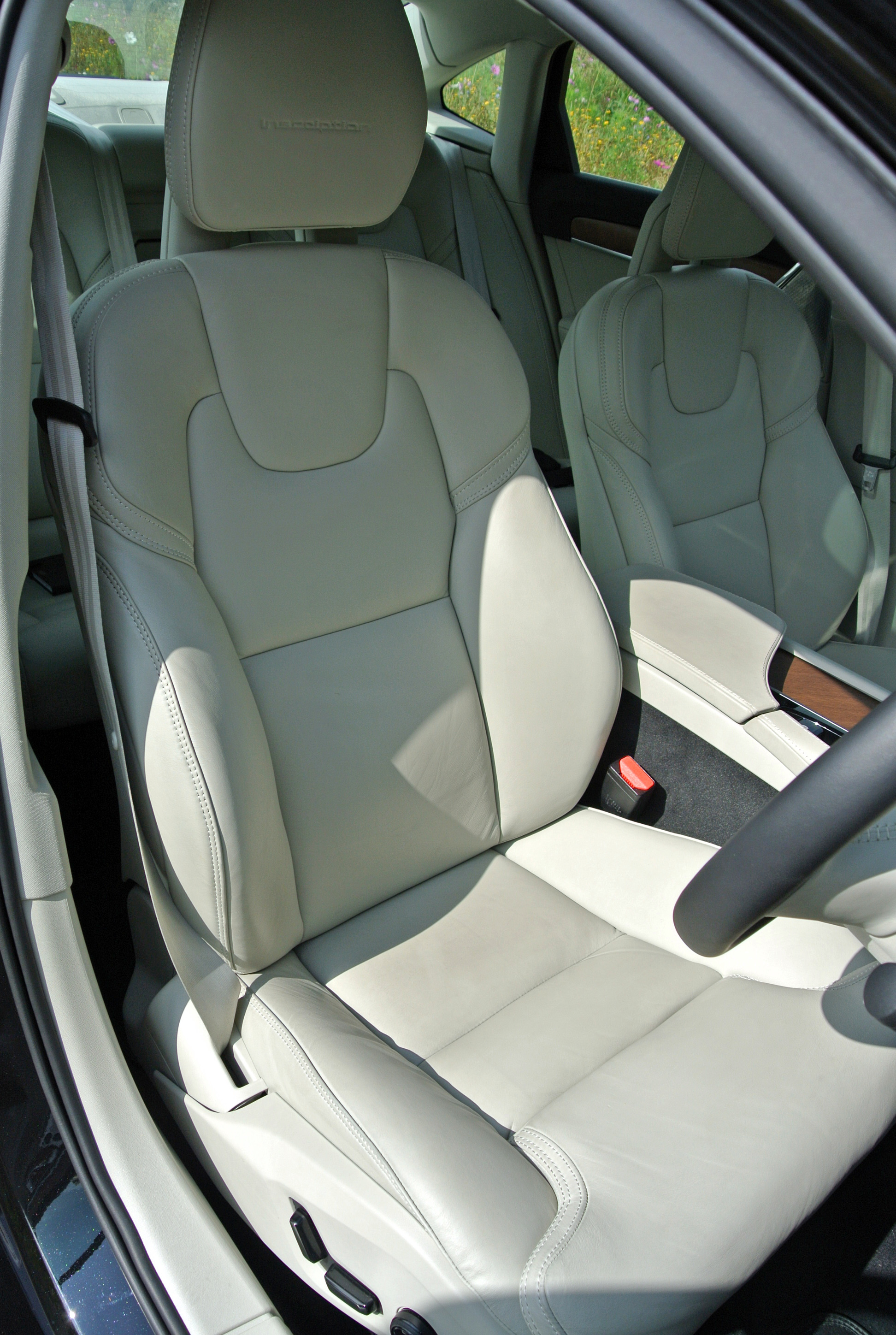 If Joanna Lumley can be said to personify the expression ‘thinking man’s totty’, Volvo is equally timeless and elegant and classy. While the world is a sadder place without Saab on-board, Volvo continues to fly a flag for Swedish enterprise, displaying ample examples of styling nuances, build integrity and engineering innovation. If anything, its resolve is stronger than ever, which is an aspect of quality that transcends the nominal ‘soft-touch’ appeal of its market-perceived rivals.

Entering the effortlessly graceful and supremely spacious cabin, the driver is greeted by a concerted flow of ingenuity. Natural equates to ‘green’. Green is worthy. From the warmth of the wood fillets, to the tactility of the leather surfaces, the S90 oozes quality by subliminal, yet still physical means. The dashboard graphics and portrait ‘touch-screen’ in the centre console utter a barely audible but sensually valid ‘coo’ that is matched by the occupants’ ‘cor’. Volvo does not need the clinical blandness of Audi, nor the technological clamminess of BMW, while the upmarket and arrogant cloying of Mercedes-Benz is best allocated to the hard shoulder of the German autobahn. Instead, the driver and guests are invited to touch and feel and become part of the uniquely warming nature of Volvo, whether indulging in Momentum, or the higher cost Inscription, trim levels. 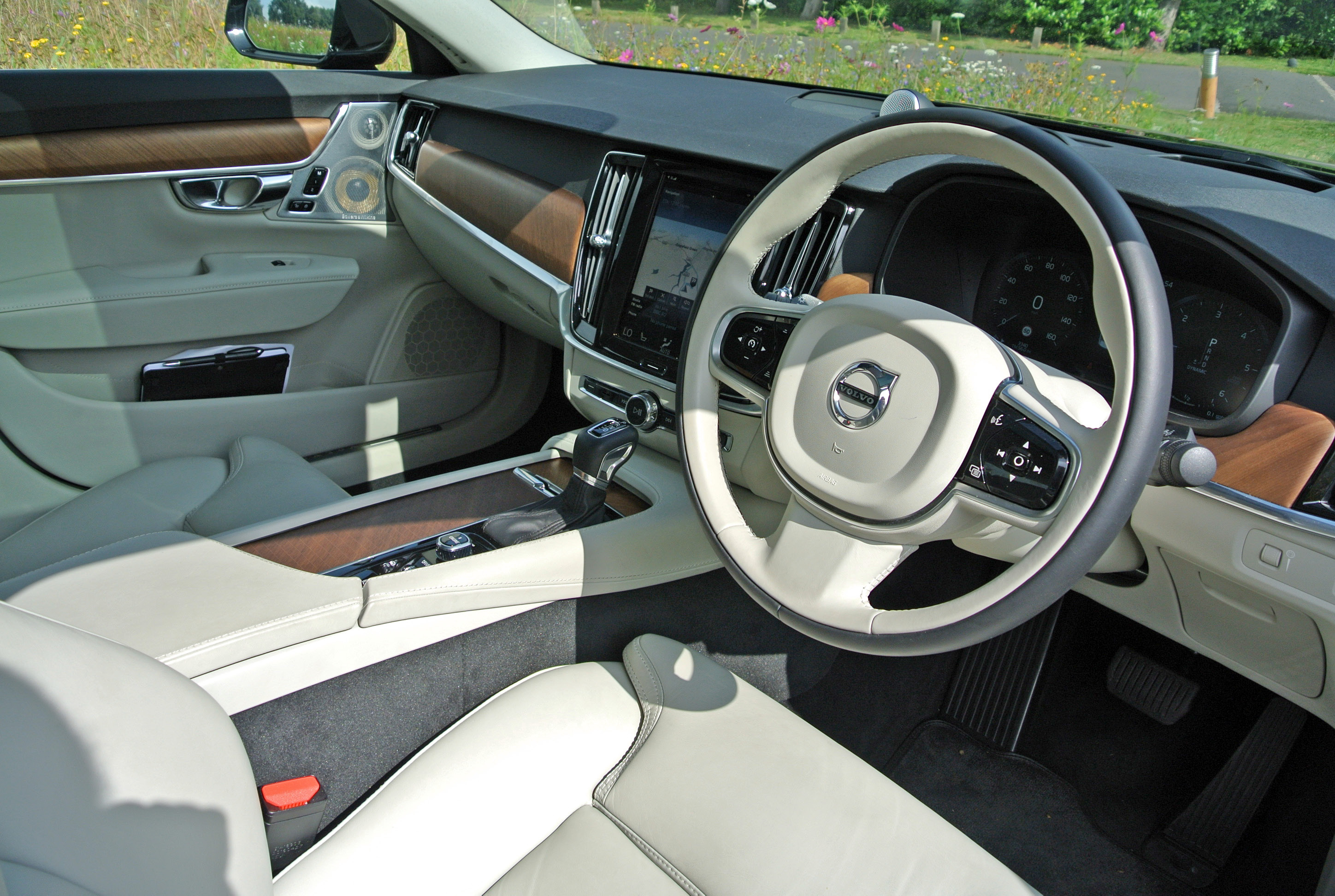 Beneath the Scandinavian behemoth’s bonnet is a choice of just two (for the moment) diesel engines. Both four cylinders displace two-litres capacity, although 187 and 232bhp are the respective power outputs, emitting 116 and 127g/km of CO2. While the ‘lesser’ D4, with front-wheel-drive starts at £32,500, the 4WD PowerPulse unit is £7,000 costlier and both drive through 8-speed Aisin-Warner auto-boxes. My personal choice lies with the less punchy engine, which is smoother, quieter and only fractionally slower. Although I am unable to report on it, a T8 petrol derivative should be with us next year, featuring both turbo and supercharging, as well as electric power, to total 404bhp and a remarkable 44g//km CO2 rating (allied to a 28 miles EV range).

As you might expect, personalisation is central to Volvo’s current ideology and, while the standard cars are well equipped, the options lists allow customers to enhance their Volvo experiences to fresh peaks. The S90 D5 Inscription pictured (priced from £42,000) weighs in with laminated side glass (+£750), a Bowers & Wilkins stereo upgrade (+£3,000), adaptive damping and air rear suspension (+£1,500) and 19-inch alloys (+£700), among a dazzling array of electronic refinements that hike the price tag to £53,380, a factor that does place Volvo into querulous territory…does it warrant it?

If quality can be termed an ethereal aspect, then ‘feel’ but not necessarily tactility must ensue. With the three-position drive modes, Eco and Comfort provide the least amount of feedback to the driver’s fingers and bottom. However, select Dynamic via the knurled roller located behind the gear selector and the impression of engineered quality is imparted with fluent ease, by means of weightier power steering assistance, sharper but never jarringly so throttle and gearbox responses and slightly firmed dampers. Yet, at no time does the car lose its composure, its innate sense of balance, or its overall driveability. 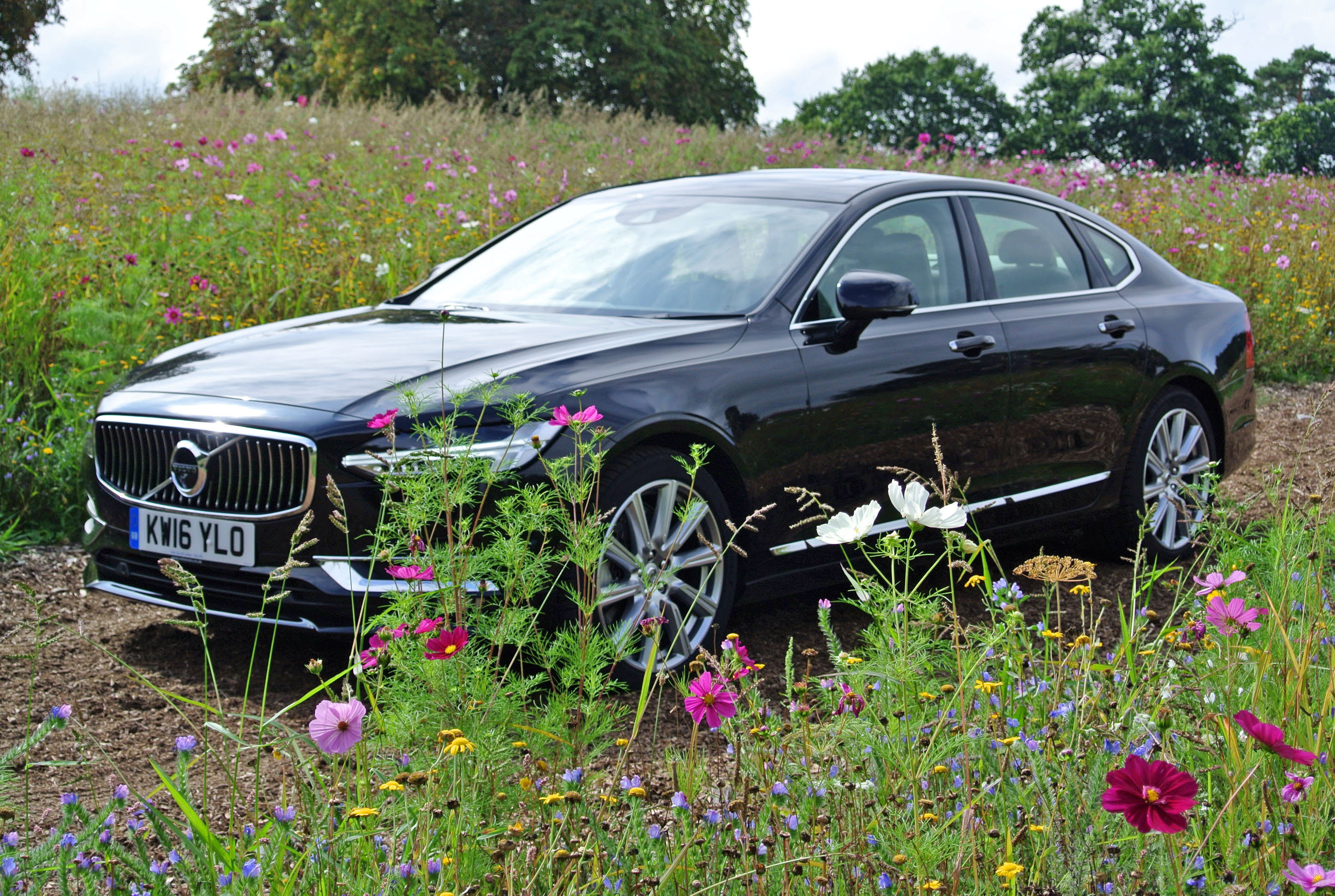 Double wishbone front suspension, working on Chapman monotube damper struts, allied to a rear axle located by four trailing arms and a transverse, composite leaf spring, not only ensure a fluent ride quality but also a directional stability that is virtually unsurpassed.

Given its head, this model will despatch effortlessly the 0-60mph benchmark in a cool 6.7 seconds, topping out at 145mph, with a potential 58.9mpg on the Official Combined fuel cycle. While I was unable to record better than 47.8mpg in a mix of test conditions, I can tell you that, for a 1.76-tonne motorcar, this is a hugely impressive return, supported by a VED-free first year and £110 road fund licence annually thereafter, aimed at keeping costs within tight bounds.

Without delving into the technology, the S90 is outstanding in virtually all respects. However, its PowerPulse engine, which utilises a small air compressor to spool-up the turbocharger and reduce ‘lag’, is not the most pleasant of solutions. The engine note is uninspiring and the inherent delay in throttle response, although reduced significantly, is still present. The V90 (estate car) version I also tested featured the D4 unit and you can read more about it in the relevant test feature.

As far as the rest of the generous standard equipment is concerned, as you might expect, autonomy, albeit of a semi-autonomous type, features strongly. Naturally, City Safety, which now incorporates large animal detection (a boon for the 42,000-plus deer incidents that occur annually on British roads), emergency braking, including stops at junctions, and collision mitigation functions figure highly. However, Pilot Assist now links with the adaptive cruise and lane control functions, by providing semi-autonomous steering control. Although I found that it was confused by some questionable road markings on the M3, the need to maintain manual (light) contact with the tiller might harbour some driver benefits that living with the car for longer than just a few hours will highlight more satisfactorily. 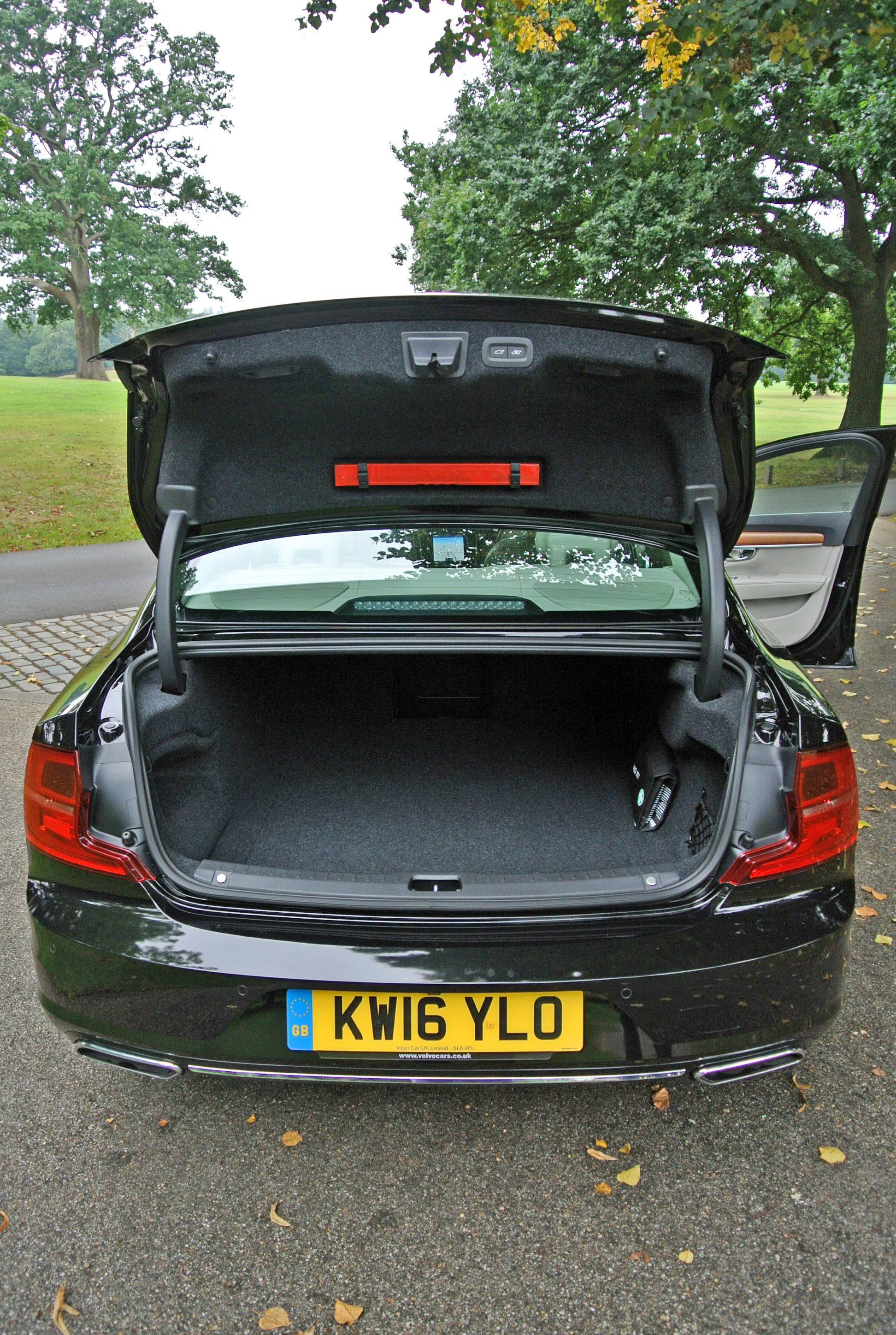 Combine the various other electronic enhancements (the car is a WiFi hotspot) with run-off road mitigation (a world first) and protection software, it is abundantly clear that a lot of Volvo’s class lies beneath the skin. At no time does the car cease being enjoyable, wieldy and rewarding to drive, which means that the company has managed to retain the central Volvo dynamic qualities that have always marked out its brand competence.

Impressive. Elegant. Comfortable and cosseting. Without having to shout its credentials at the consumer, Volvo proves that Scandinavian subtlety and strength of purpose remain its core attributes. Its boot access suffers from a slightly too narrow aperture, although there are no issues with the 500-litres capacity, or the fact that a two-metre load can be accommodated. It does take a discerning business customer at this end of the model pricing market to ascertain precisely what Volvo stands for but, if street presence is the primary marker, then Volvo’s S90 has it covered in abundance.