Type R gives with one hand, looks grim on the other

A long-time fan of Honda, Iain Robertson, understands the emotional appeal of the latest Type R model but he is immensely concerned about the ‘track day’ addenda that turn it into a dog’s dinner, in a case of form over function.

To commence, I need you to comprehend that I harbour a long-time appreciation, fascination and admiration for Honda. It is a totally independent player, just like Mazda, which, apart from their unique positions in a world market, makes Honda’s current motorcar stance look surprisingly shaky, when it should be on immutably solid ground. I beg your indulgence to explain…

Honda is actually in a far stronger position than Mazda. All Mazda produces is a range of cars. Honda has its immensely successful motorcycle division, marine, industrial, lawn and garden, all-terrain vehicles, power tools, aeroplane and mobility arms, the latter epitomised by the remarkable ASIMO, a humanoid robot. Yet, Mazda produces cars that are stylish, sexy, dependable, practical and eminently desirable.

In truth, the last time that I can state I felt thoroughly enamoured by a Honda, was while driving the final UK iteration of the Honda Legend, the company’s highly competent large saloon, which ceased to be sold here in early-2009. That is a long time ago. It was a technological tour-de-force. Honda has not reproduced that market-leading attitude in its various models since that time and, when I reflect on some of the fantastic cars it has made and sold here, including the delightful CRX, the first generation Civic Type-R, the four-wheel-steer Prelude and the brilliant first-generation Jazz, I am disappointed that the company is simply following the herd these days.

Honda deserves a better throw of the dice. While I was looking forwards excitedly to sampling the latest Type R version of the Civic, my initial impressions could not have been much worse. Of course, it does not help that I possess an arse the size of Clackmannanshire (which I should point out is the smallest county in Scotland), which needs to be squeezed rather painfully between the deep side bolsters of the red Alcantara-clad driver’s seat (the front passenger seat is the same, while the rear is regular dark grey fabric). Once ensconced, tolerating the bruising, even hunkering as low as I can possibly make my two metres of height, the seat base is set so high (on its lowest adjustment) that my view outwards is more beetle-browed than clear. 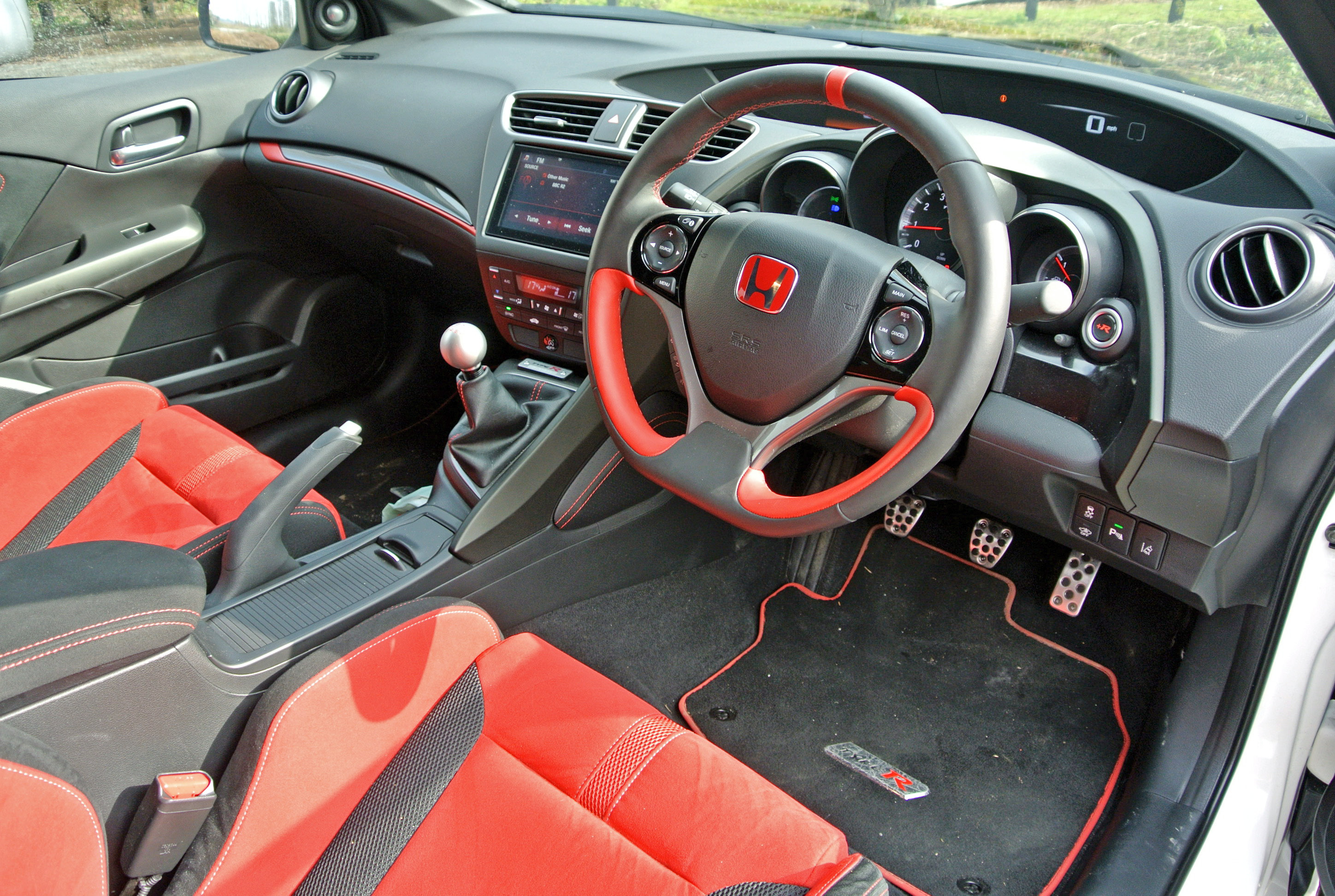 Just because Honda is a Japanese car, does not warrant it producing cars for dwarves…or slightly-built motorsport drivers, with the physiques of racing snakes. For heaven’s sake, Honda is also a British carmaker. It is supposed to understand its market and the sizes of tall Europeans that are currently barred from contemplating ownership, because they are just too tall!

However, it is not so much the Type R’s interior that sticks in my craw but, rather, the incomprehensible ‘Halfords-weekender’ appeal of the exterior. With plastic fillets fore and aft, tacked-on (aluminium) wheel-arch lips and that monstrosity of a boot spoiler, allied to air vents in the top of the front wings and a purportedly aerodynamic rear under-tray that is just hatefully ugly, every little, backwards baseball cap-wearing naïf from Brighton to Wick will be looking to pilfer the keys and do their ‘turn’ around McDonalds car park. 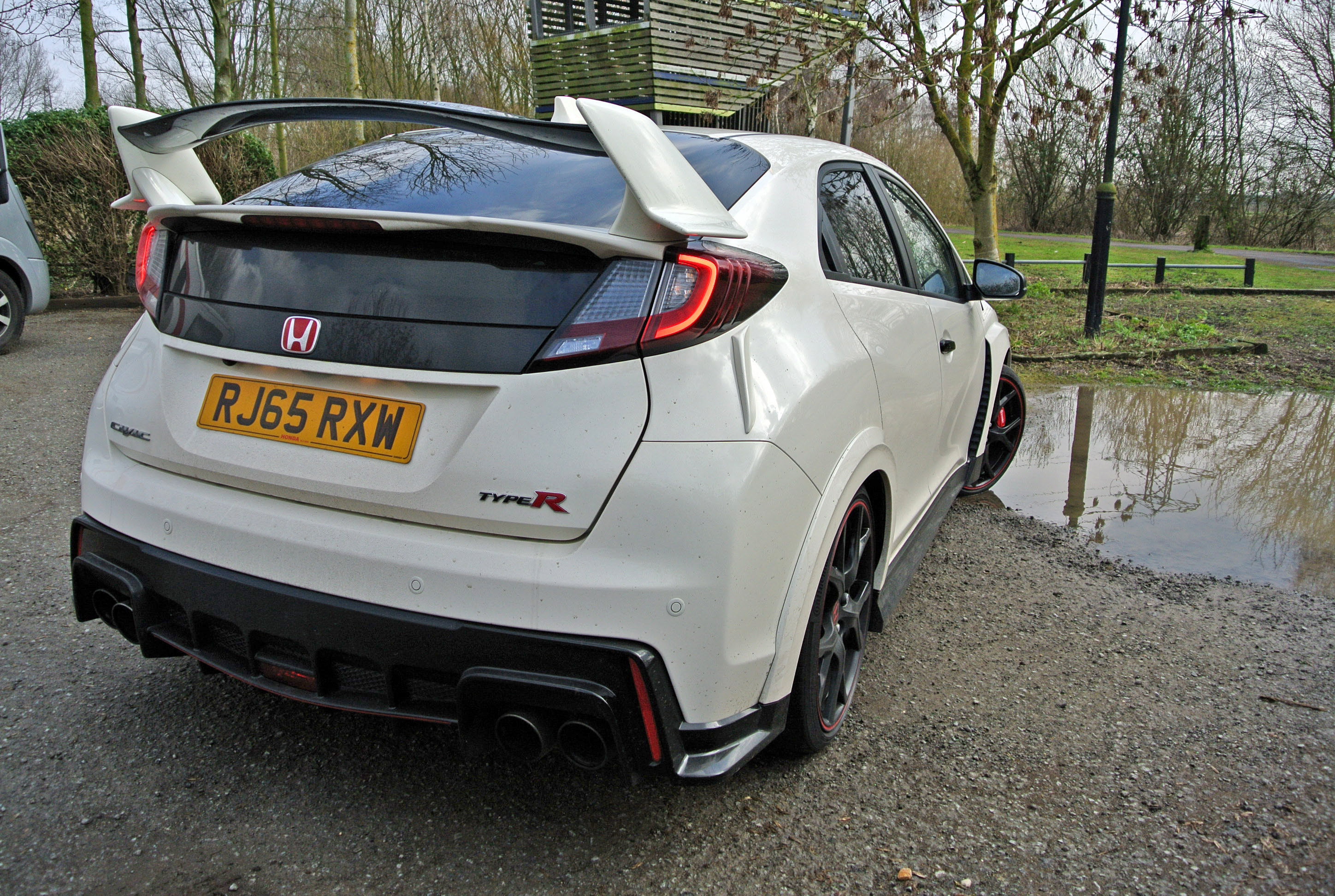 However, the biggest problem lies with the base Civic, which is hardly going to be a future classic. While I know that a newer, sleeker and better example is on the way (unveiled at the recent Geneva Motor Show), the core headache remains for the next 18 months or so. Just to remind you, I am a Honda fan.

For what it is worth, the new 2.0-litre turbocharged power unit is a 306bhp gem. Punchy in delivery, accompanied by a healthy 295lbs ft of torque, delivered in typical, modern turbo form, as a fairly broad 2,000 to 4,500rpm band, it makes its naturally-aspirated forerunner look lethargic. However, this new unit is very non-turbo-like in its rangy revviness, pulling to the 7,000rpm redline and even slightly beyond it. To a certain extent, I miss the earlier VTEC’s all-or-nothing approach (the technology is still there but the turbo masks it), which kicked in above 4,000rpm but was quite relentless thereafter. The turbocharger renders that genuine raciness impractical and the important mid-range verve, thanks to the significantly larger numbers, is now this unit’s strength. However, allow the revs to drop below 2,000rpm, while being in the wrong gear, and your laziness will be rewarded with a veritable lack of grunt.

Although Honda boasts of a mere 40mm lever movement between successive ratios of the 6-speed manual transmission, while the shift quality is all crisply ‘snickety-snick’ at regular speeds, stretch the envelope a touch and faster shifts can be baulked occasionally…which can be embarrassing, if there is an audience. Yet, the overall ‘connected’ feel is omni-present.

The suspension is firm, which is to be expected of a racy little hatchback like the Type R. However, the electric power steering is perhaps a little too light, in terms of heft effort, with a mildly disarming shortage of feedback to the driver’s fingertips. To be fair, the Type R is directionally stable and it can corner like a polecat, it is just the feel is a tad remote. The ride quality is actually quite acceptable and, perhaps, the trade-off resides in the apparent lack of bite at the helm. It digs into bends very well, although you can sense the build-up of understeer.

Depress the red ‘R’ button on the right-hand side of the wraparound dashboard moulding and, apart from the red glow emerging cliché-like from the analogue dials, allied to a tauter series of dynamic responses (from throttle, brakes, dampers and steering), you will start to learn the meaning of true understeer. The front-end of the car will plough-on into bends, the torque fighting against the available grip of the tyres, while the driver clings on for all he is worth!

Personally, I think that there is enough cacophony from the fluttering turbo wastegate and the waffling exhaust that I could not live with the resultant, remorseless spinal hammering. My advice would be NOT to touch that button. Interestingly, Honda has seen fit to equip the Type R with a limited-slip front differential (the car is 2WD) and the McPherson strut front suspension features a ‘double-knuckle’ design, not dissimilar to that employed by Ford on its Focus RS and Peugeot on its 308GTi. Sadly, the rear axle is just a cost-cutting, dead torsion beam. Had it been a little more, multi-link sophisticated, I believe that Honda would have been able to dial-out the aforementioned understeer. The spider-like 19-inch alloy wheels are clad in 235/35-section Continental tyres (I believe that Michelins would be the better option). 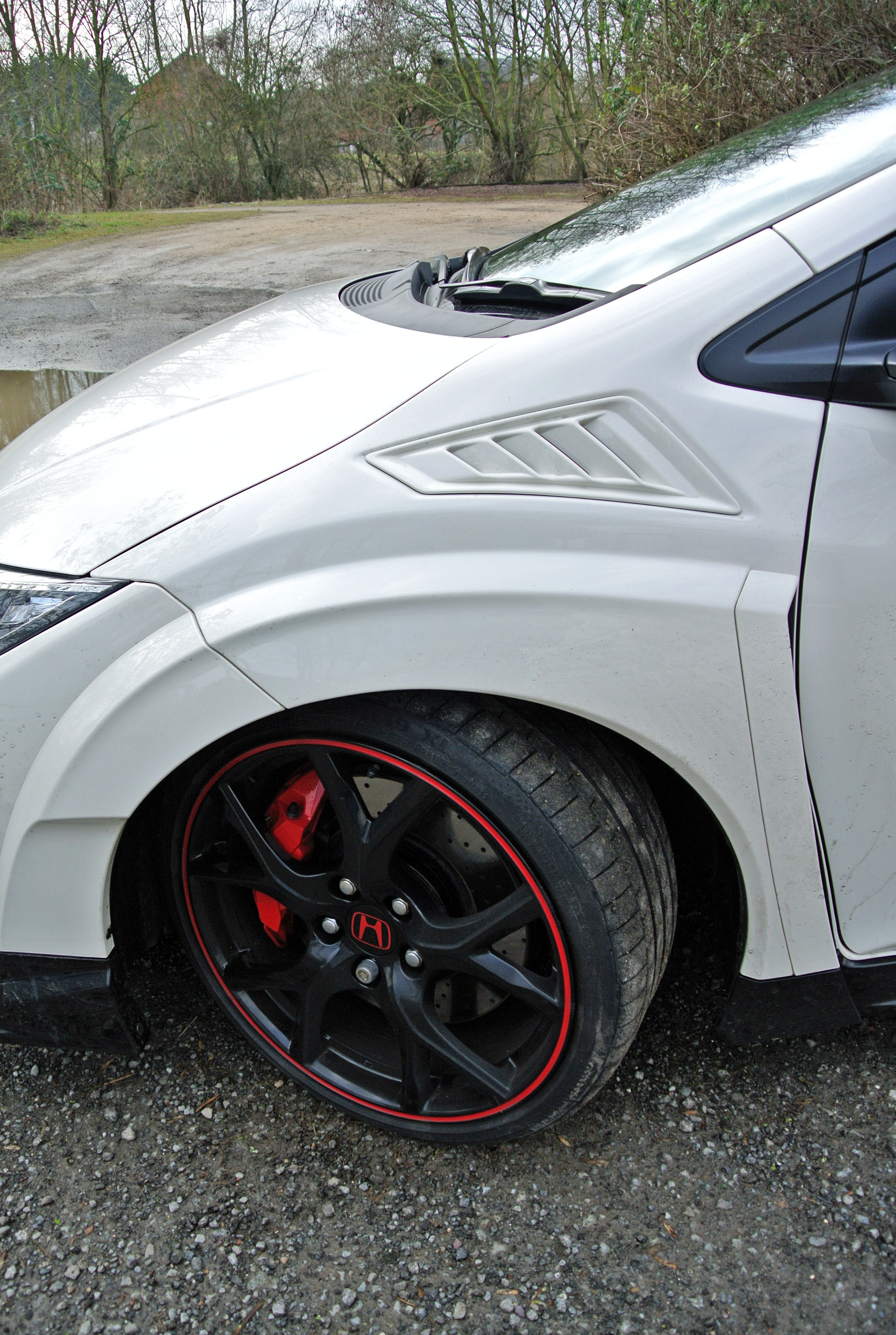 With a heavy sense of irony, the ‘stop-start’ technology can be cancelled by depressing a button in the lower centre console. Although I can understand the double layering of the dashboard layout, in a high performance car (more of which in a moment), placing the rev-counter in the lower section means diverting one’s attention from the road ahead. The digital speedometer in the upper section is okay, just not as important as matching engine to gear ratio and road speed. The R button introduces a raft of fresh digital instrumentation to the left-hand bank of the panel.

Honda is up against a small but potent range of rivals, which include the latest Ford Focus RS (4WD), the Audi RS3 (Quattro), the Renaultsport Megane (front-wheel-drive) and the Seat Leon Cupra R (front). However, its main rival both on price and potential is the VW Golf R (4WD). Yet, where the Golf is all style with substance, the Civic is all form over function.

A posted top speed of 168mph is what creates a banner headline, although its 0-60mph benchmark time of around 5.6 seconds is a by-product of front-wheel-drive not being as capable as 4WD for getting the power to tarmac, as both Golf and Focus can clock the same increment in below 4.8 seconds. However, the manner by which the Civic laces together the bends on country roads is prodigious.

The Official Combined fuel return of 38.7mpg is a touch optimistic, although a surprising 34.7mpg was the result of a couple of days trawling through town and exploring the car’s handling on the country roads of Lincolnshire. Not bad at all. However, the CO2 exhaust emissions figure of 170g/km equates to £205 first year VED and £200 annually thereafter. Considering the performance potential, these are not severe numbers.

Despite wanting to fall in love with the Honda Civic Type R, I found that it fell short of my expectations. Maybe it was the lengthy gestation period that is to blame? I am unsure. Its interior plastics are a bit give-and-take but it is the accoutrements externally that do not seem at all right. The price tag, which ranges from £29,995, to which you need to add £2,300 for the GT version, is certainly pitched into market territory. Could I live with a Type R? I do not believe so, even dipping into its occasionally intoxicating performance…the ultimate irony being that I adored the Type R of 15 years ago.