HomeMonster MotorsTwin-power boosts both class and potency for Volvo XC90

Twin-power boosts both class and potency for Volvo XC90 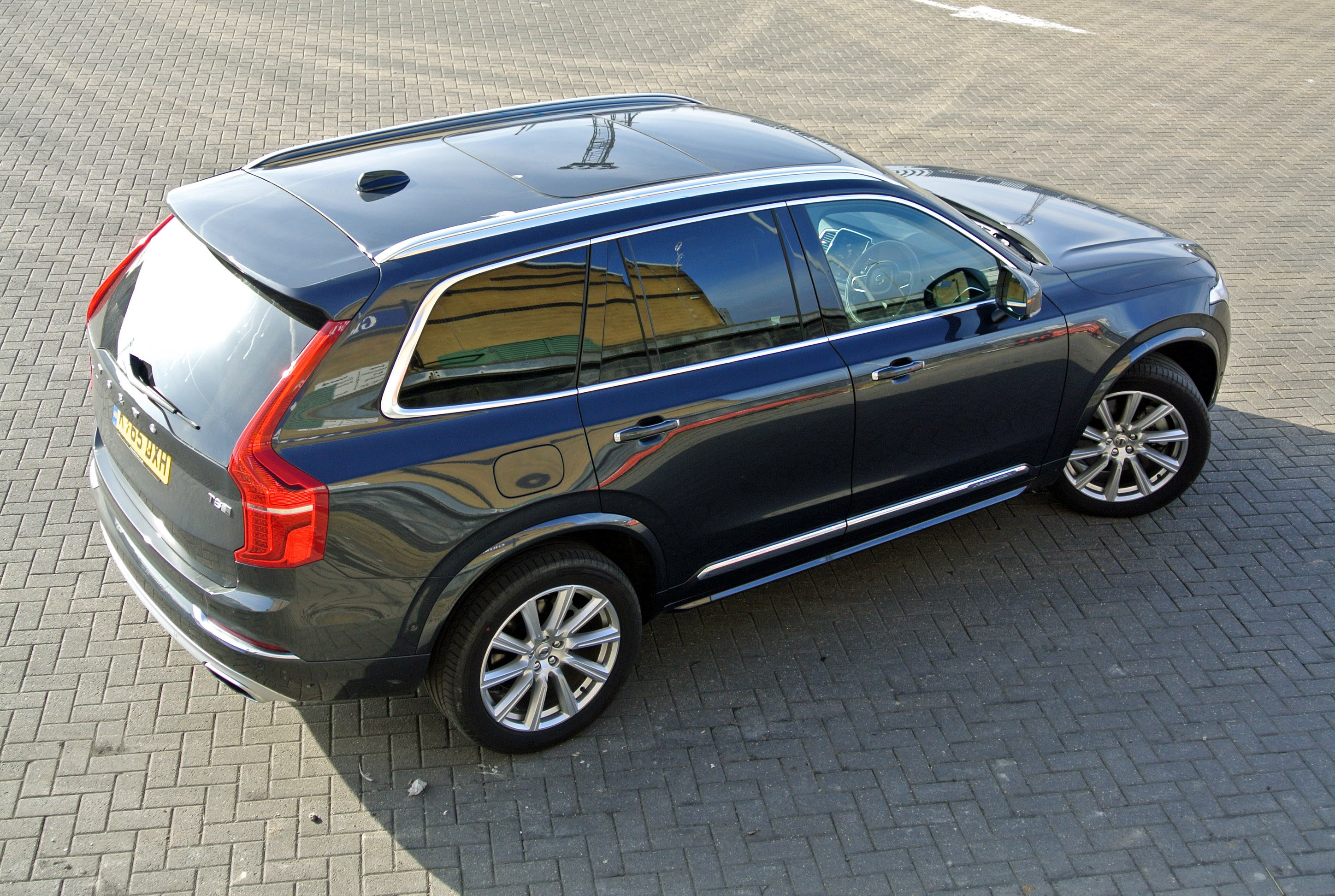 Volvo’s lovely XC90 now includes an even punchier model in its line-up that is not just easy to fall for but also makes a justified case as a thoughtful eco-miser, writes Iain Robertson, which is not what you might expect.

If, like me, you buy into Volvo’s attitude, as one of the safest, most considerate and engineering conscious of all carmakers, then you will comprehend the Swedish company’s compelling stance taken with the XC90 model. While it has never considered itself to be a ‘premium’ category player, a sobriquet gifted to it by motoring scribes/critics around the world, there is no denying that, while it is ‘just’ Volvo, it does warrant a pedestal, notional, or not.

Of course, it is residing on a lofty perch that Volvo is most concerned about. After all, it makes the brand an obvious target, most especially among the naysayers, from which to be turfed off. Personally, I have always approved of Volvo’s stand-alone premise. Even when its now-deceased rival, Saab, was located just down the road, it seldom sought to compete with it and the internecine struggles that exist between BMW, Merc and Audi, where rivalry has led to probably the most confused and confusing multiplicity of models since BLMC‘s most disturbed era, never troubled it.

Instead, even under Chinese ownership, it projects a confident aura that is also warm and engaging. It is little wonder that the Sino-Swedish alliance is so Scandinavianally-biased! The masters simply leave their charge to its own devices, pumping in investments, as it needs them, without doubt borrowing both design and technological advancements for its own domestic purposes. The benefits of the relationship are blatantly obvious.

Last year, following several seasons of ‘will they, won’t they’ emerging from the halls of Gothenburg, the original generation XC90 SUV was finally put out to pasture. It was succeeded by one of the most well-received and in-demand 4×4 estate cars to hit the market. There was such a wealth of goodwill, not just from potential buyers but also from Volvo’s commercial rivals, because they appreciate the benefits of a strongly competitive SUV sector. Everybody knew that the price would take an upwards hike with the new model range but, as it is prestige that drives this lofty segment of the 4×4 scene, Volvo’s place was assured, regardless.

Of course, Volvo remains a fairly small operator overall, which is why it has to be creative on the engineering front. While it still relies on a supply of smaller capacity engines, from the PSA Group, in models further down the range, the firm’s 2.0-litre petrol and diesel derivatives are uniquely Volvo’s property. Based on a modular engineering structure, they range in potency from around 150bhp up to the latest 403bhp Twin-Power T8 version that is installed in the car tested here. 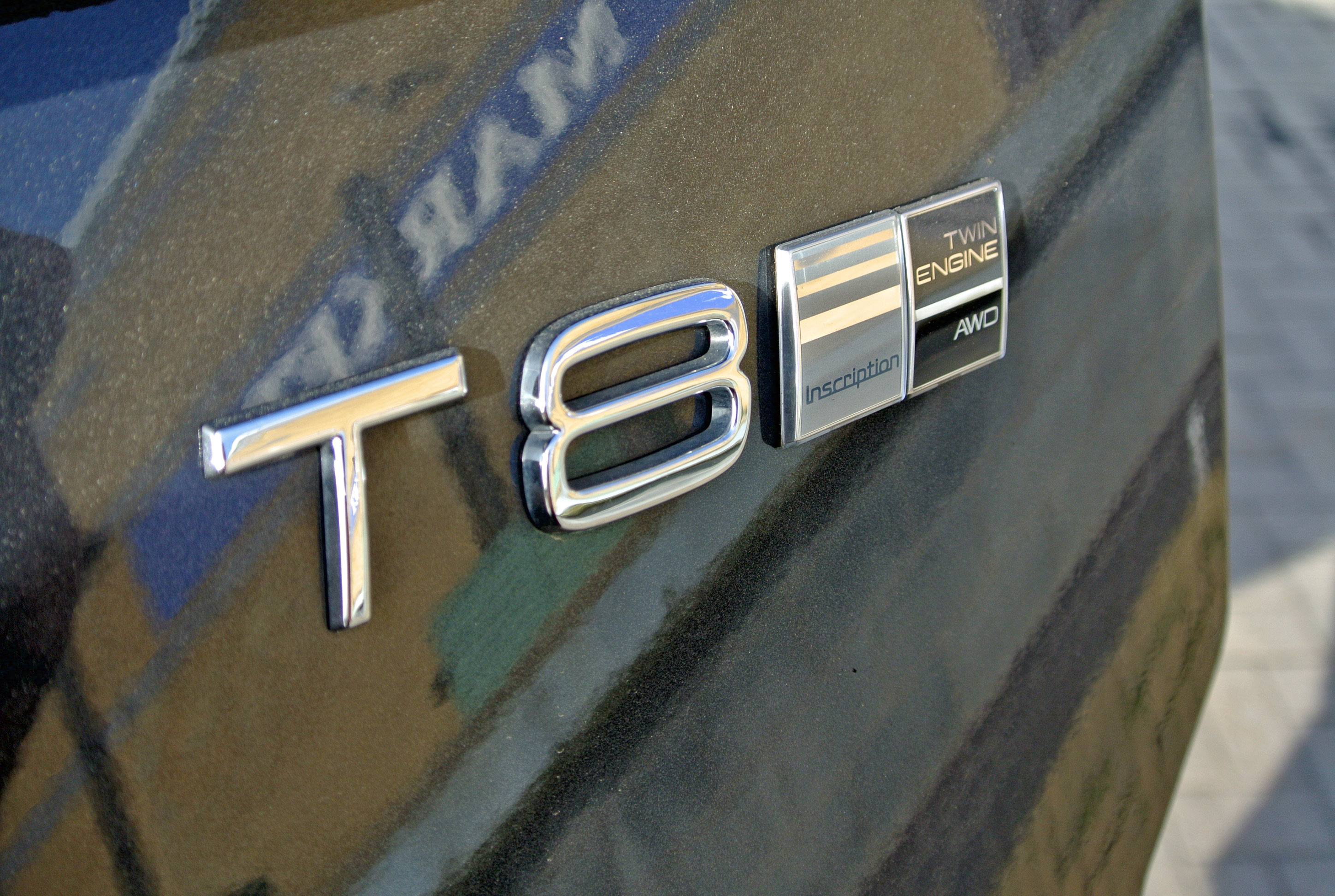 The power comes from a variety of means that include turbo-charging and the reason for calling the T8 ‘Twin-Power’ is that a supercharger is also installed to provide even more significant bottom-end punch. However, there is a little something extra special in this model, as it also features a hybrid electric motor and a storage battery that can be augmented by plugging into the mains to increase its EV-mode to a range of around 30 miles. It is little wonder that the power output is in excess of 400bhp (84bhp alone comes from the electric unit), which ensures that Volvo can tilt most fruitfully at its prestige competitors, all of which boast supercar-rivalling power outputs.

While you might fairly expect rocket-car performance, the T8 is weighed down by its technology and a kerb weight of 2,343kgs makes sure that the delivery is not in the least ‘scary’. Having said that, any car that can despatch the 0-60mph sprint in a mere 5.3 seconds can scarcely be described as sluggish either. Its top speed is pegged at 140mph, which means that the Porsche Cayenne, the SVR version of the Range Rover and even the BMW X5M can knock nine bells of hell out of it at the drag-strip…but that is not what Volvo is about and 140mph is more than adequate for any of us, in Volvo’s book, all stated without an ounce of arrogance.

Naturally, you pay for the privileges granted. In Inscription trim, which is the level at which most XC90s are sold, the T8 starts from a hefty £64,205 (the entry-level XC90 starts at £46,250). By the time you have factored in £3,000’s worth of Bowers & Wilkins stereo system, £1,500 for the adaptive cruise/queue assist/lane-keeping/blind-spot and cross-traffic alerts and rear collision mitigation, £1,000 for the 360-degree parking camera and automated park assist, plus the winter pack at £575, the price is starting to escalate. The test example also featured power seats, dark tinted glass and £700 of metallic paint finish to hike the invoice to a whopping £71,950. It ain’t cheap but then the best seldom is. 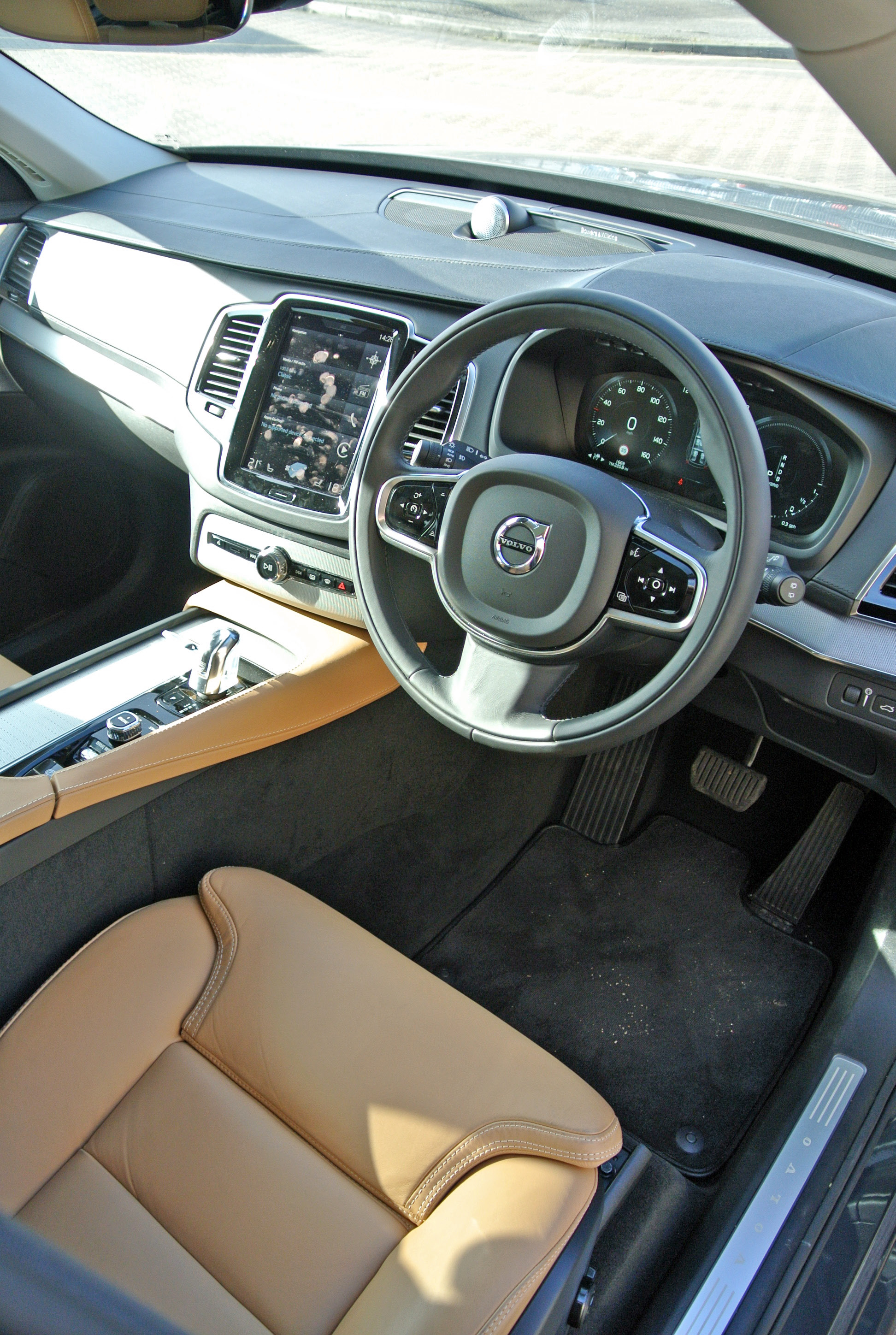 In case you need to be reminded, the aforementioned Porker, Bimmer and Rangie all cost well into £80,000 to £110,000 for equivalent specifications and, for my money, the Volvo is by far the most attractive of the lot. I should point out that I do NOT possess the funds to buy one, even though I might aspire to it, but I do know a lot of people who can and the XC90 is definitely on their shortlists.

Another aspect of the love affairs that we all generate for our specific choices of cars lies in the detail finish of the XC90. It is utterly beautiful inside. Finest Nappa hide covers almost all surfaces, which provide a cosseting and lounge comfortable environment for all occupants. There is bags of space within the cabin and a pair of extra jump-seats at the rear means that this XC90 can comply with go-anywhere MPV demands too. However, the first thing that strikes you, when you slip behind the steering wheel, is the phenomenal beauty of the Orrefors cut-crystal gear-knob, atop the selector for the 8-speed automatic transmission. While I am sure that you might be able to specify a not dissimilar device for your Range Rover, Volvo fits this iconic Swedish glass detail as standard in the T8. 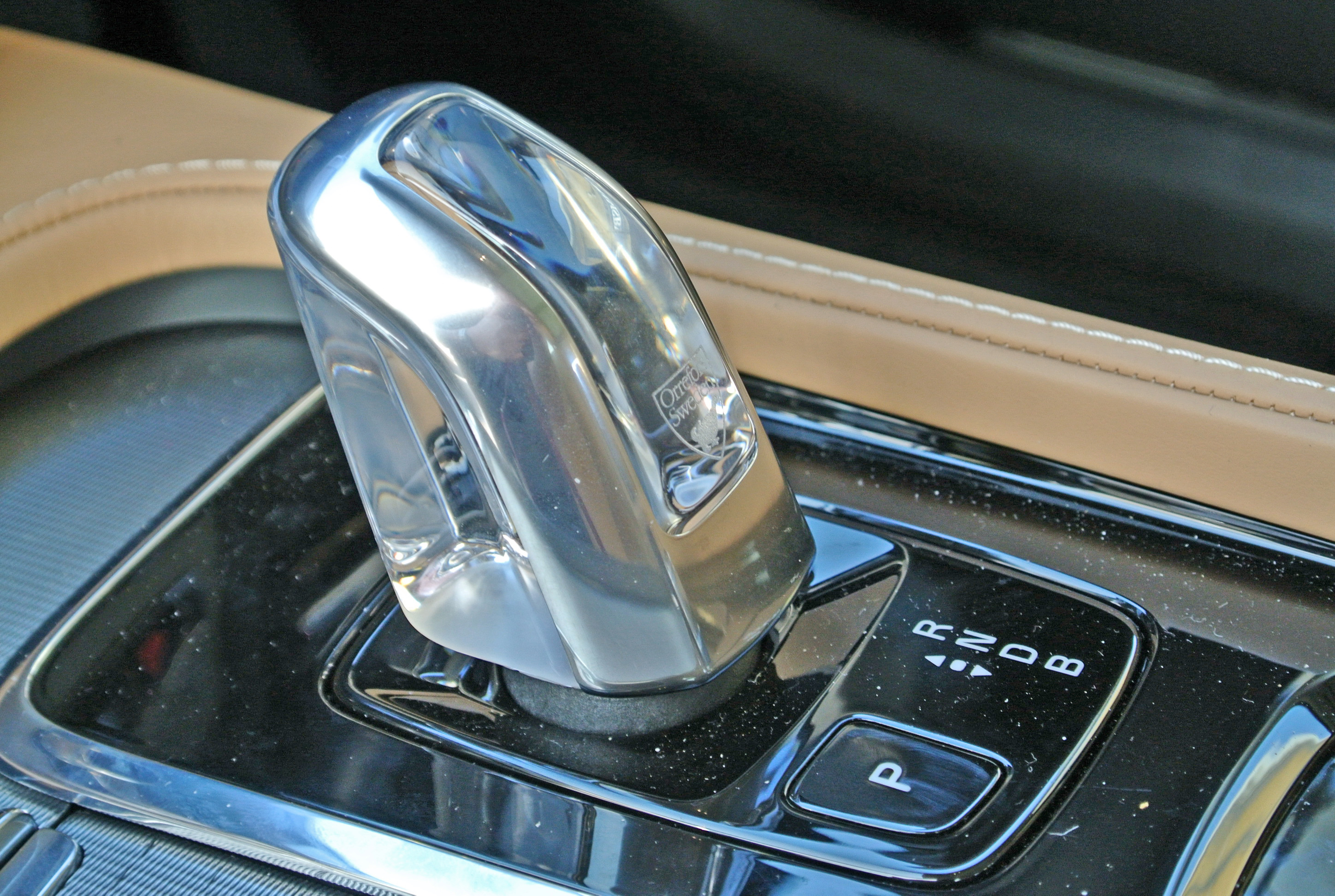 As to the rest of the interior, it exudes a naturalistic air of high quality about it, from the portrait-view touch-screen in the dash-centre, to the knurled metal cube that starts the engine and the engine-turned switchgear that presents a sense of occasion every time the car is driven. It is stunning. Yet, it manages to look classy and timeless in its appeal, while retaining an atmosphere of practical durability. While the Defender might still serve as the ‘farmer’s friend’, his Lordship will travel to the monthly meetings and annual agricultural society dinner at the controls of the XC90.

Its lofty ride height, while not presenting any access issues to the cabin, does affect the ride and handling compromise. Although air-damped, the long-travel coil springs are fairly soft and compliant, which promotes some initial lean on corners, although the overall balance of the car (even driving it like a lunatic on some of Lincolnshire’s back-doubles) remains eminently safe, with excellent grip from the tyres and a fairly neutral stance. The four wheel drive can be felt in extreme situations, where slight plough-on understeer can be detected through the steering wheel rim. It is not bad but it does warn you that the edge (not normally a Volvo trait) might be around the next bend! 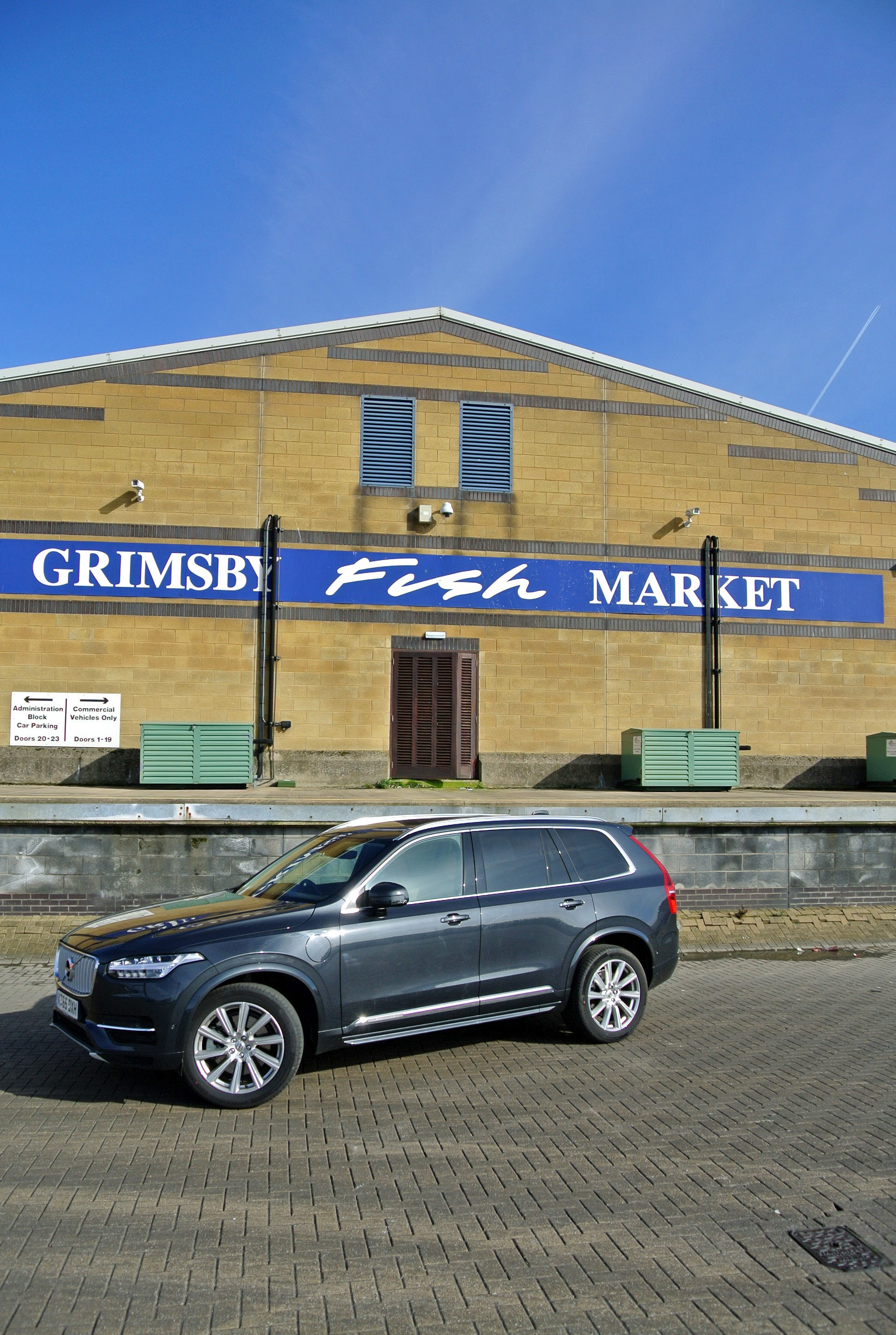 As already stated, the performance envelope is impressive but there is another side to this car. It is most noticeable in fuel economy, which is given as 134.5mpg Official Combined, a figure that might be within reach, were the plug-in battery fully-charged and you were relying on it alone for your city commute. More impressive is the CO2 rating of just 49g/km, which means that your XC90 T8 becomes a tax-free haven in the main. How many actual owners will resort to EV-mode alone is in question, as far too many of them will want to dip into the supercar-baiting performance afforded by the petrol engine. Yet, I managed a perfectly respectable 45mpg in a mix of driving conditions that were mostly of the press-on variety. The bottom-line is Tax Band A and zero cost for VED, which makes this car a must have for the city-based, status-aware executive in our topsy-turvy world.

From its nose, with its bold longboat grille, flanked by the Thor Hammers in the headlamps that provide its DRL signature, to the upright practicality of its tail, the Volvo XC90 T8 is awash with first-class appeal. It delivers performance in spades but sips fuel, in the right places, to make it remarkably cost-effective to live with. Tremendously comfortable and spacious, the cabin creates a state-room attraction unequalled by any other SUV, topped off with a crystal gear-knob. This Volvo is the ultimate Chief Executive’s car for all conditions, for all seasons.