It seems as though Iain Robertson has left the best car of 2016 to the very end of the year and, without any doubt, he has determined that it is not its SUV stance but its long list of additional benefits that warrant the choice.

For too many years, despite Toyota’s onwards and upwards progress, despite it becoming the world’s largest car manufacturing brand, despite it retaining its independence in a truly mad motoring market, this is the Japanese company, with a world responsibility, that has defined blandness, as a character-free zone. In fact, the carmaker had become a master of its trade.

From producing plain Jane family models (that sold in their millions), to the awkward designs of others, notably through the ‘premium’ Lexus range but also in its various hybrids, which, for some reason, possess an unerring compulsion to look like a cow’s arse on a frosty morning, in order to garner some consumer attention, Toyota should be the least desirable car company in the world. Weird does not cover it. Complex panel shut-lines that seem to shoot off in different directions but never possess a sense of visual balance, matched to patently ugly interiors produced from compressed grey plastics that infer neither warmth, nor understanding, are hardly sound reasons for commercial viability…but Toyota survives.

On the other side of the coin, Toyota has endured innumerable slings and arrows, with international recalls and major warranty issues, neither of which are conducive to its much-vaunted stance of being the world’s most dependable motorcars. However, 2016 panned out as one of the firm’s better years. There has not been one single Toyota that I have sampled that I could not have lived with, a factor that was hammered home to me, when I tested the Hilux pickup truck in late-summer. I praised its overall competence.

The same applied more recently to the Auris model, powered by the 1.2-litre, light-pressure turbocharged engine, by which I make no apology for becoming totally beguiled, even taking to ‘facebook’ to declare my affections to colleagues and Toyota owners…well, it helps me get through some sleepless nights. However, the C-HR arrived. 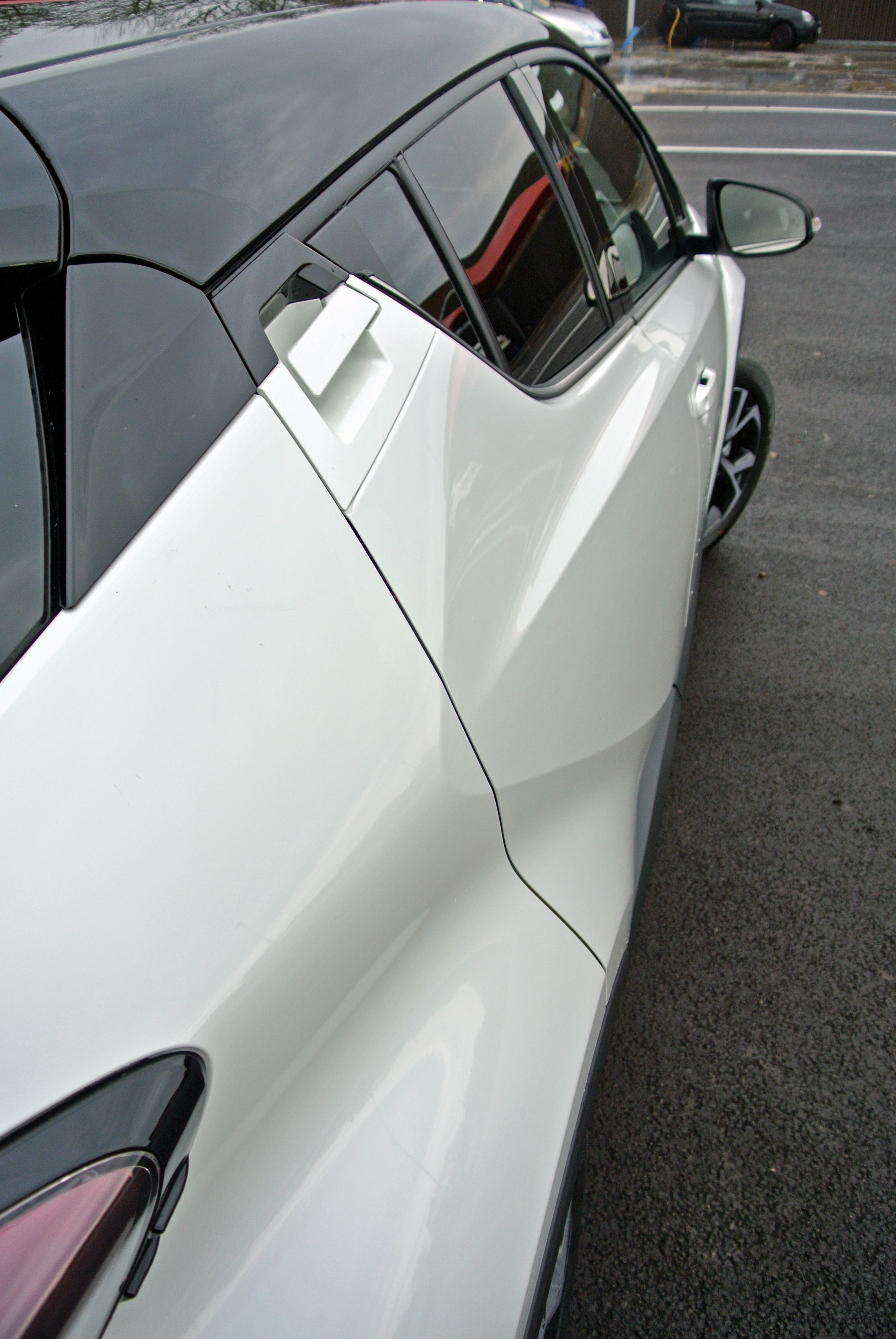 By all accounts, this car should not work. I hate SUVs. Okay. I love hybrids. Yet, that appearance of stilted ride height truly gets my goat, normally, but it did not do so with the C-HR, which carries off the optical illusion of crossover-ness, with its pinched midriff; the darker sections of lower bodywork granting a lissom and lithe profile to the car. It works with the flow-lines on the vehicle’s flanks, the bolstered and sporty wheel arches heralding a purposeful rally-car style and being wrapped around stylish alloy wheels. The result appears stretched and sinewy, perhaps even verging on muscular but not in that mildly disturbing Floridian beach style. 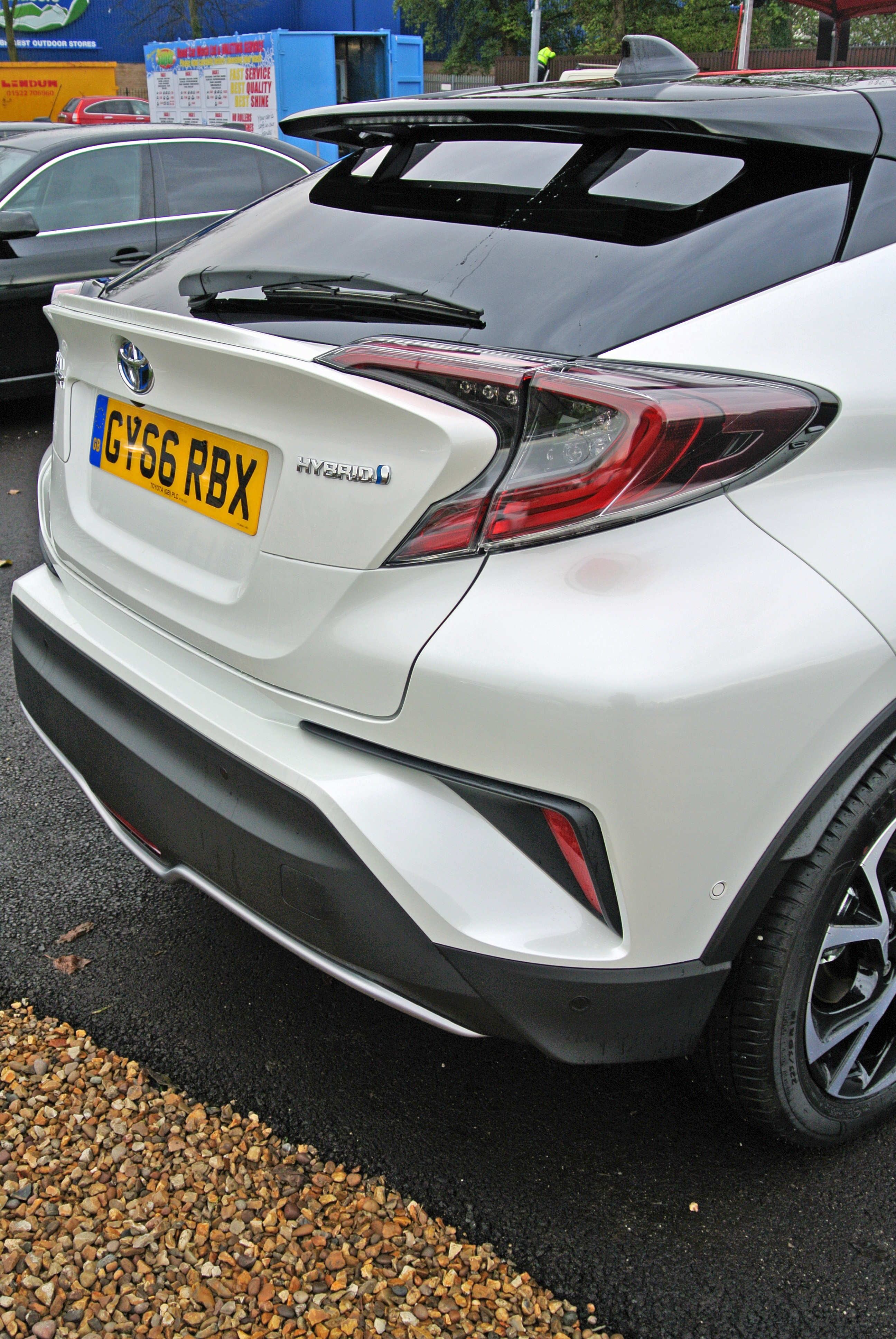 Intriguingly, even the LED head and tail lamp units that protrude into the atmosphere but do not foster the bejewelled appearance of an Italian exotic, manage to assimilate a designed-in purpose, as if they are meant to be there and not some token add-on (for an example of how not to achieve this aim, just take a gander at the Nissan Juke…now that’s plug-ugly and should have been drowned at birth). Even the visual hints at aerodynamic ‘ground effects’, the front and rear under-bumper addenda, even the high-level tail spoiler, do not look out of place. To a certain extent, Nissan will have done a great, if unwitting favour to Toyota, as I can see a point at which the C-HR might overtake the Juke in the UK sales charts, which is something that I would welcome. Judging by the admiring glances that the C-HR received, while I trawled around town, not least from the over-abundant Juke sisterhood (it’s not a man’s car!), it could happen. 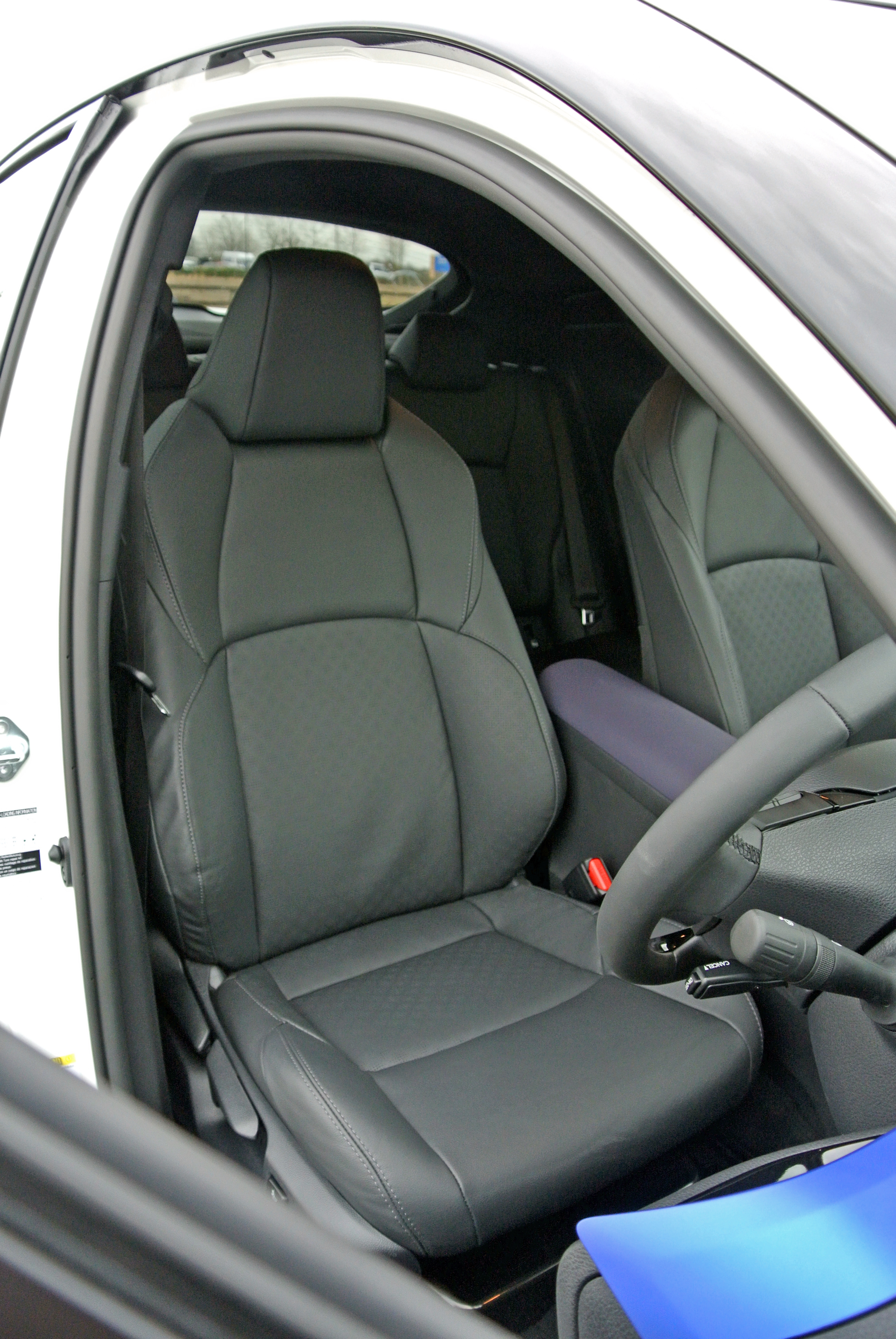 However, the deepest joy is granted upon cracking open the driver’s door. Apart from the incredibly smart swathe of mauve-coloured, saddle-type ‘hide’ layered sensually across the dashboard top, stacked above a mid-blue ‘metallic’ flange that connects both front doors to the architecture and below which juts, rather than slinks, a soft-touch lower dashboard trim, within which is the push-to-open bin ahead of the front passenger’s knees, both the padded roof panel (with its leaf-moulded impression) and the diamond texture door cards (also in mauve) add fascinating levels of interest. Like an iPad but carrying readily visible graphics, the centre of the dash is predominated by a touch-screen that accesses the majority of the car functions. 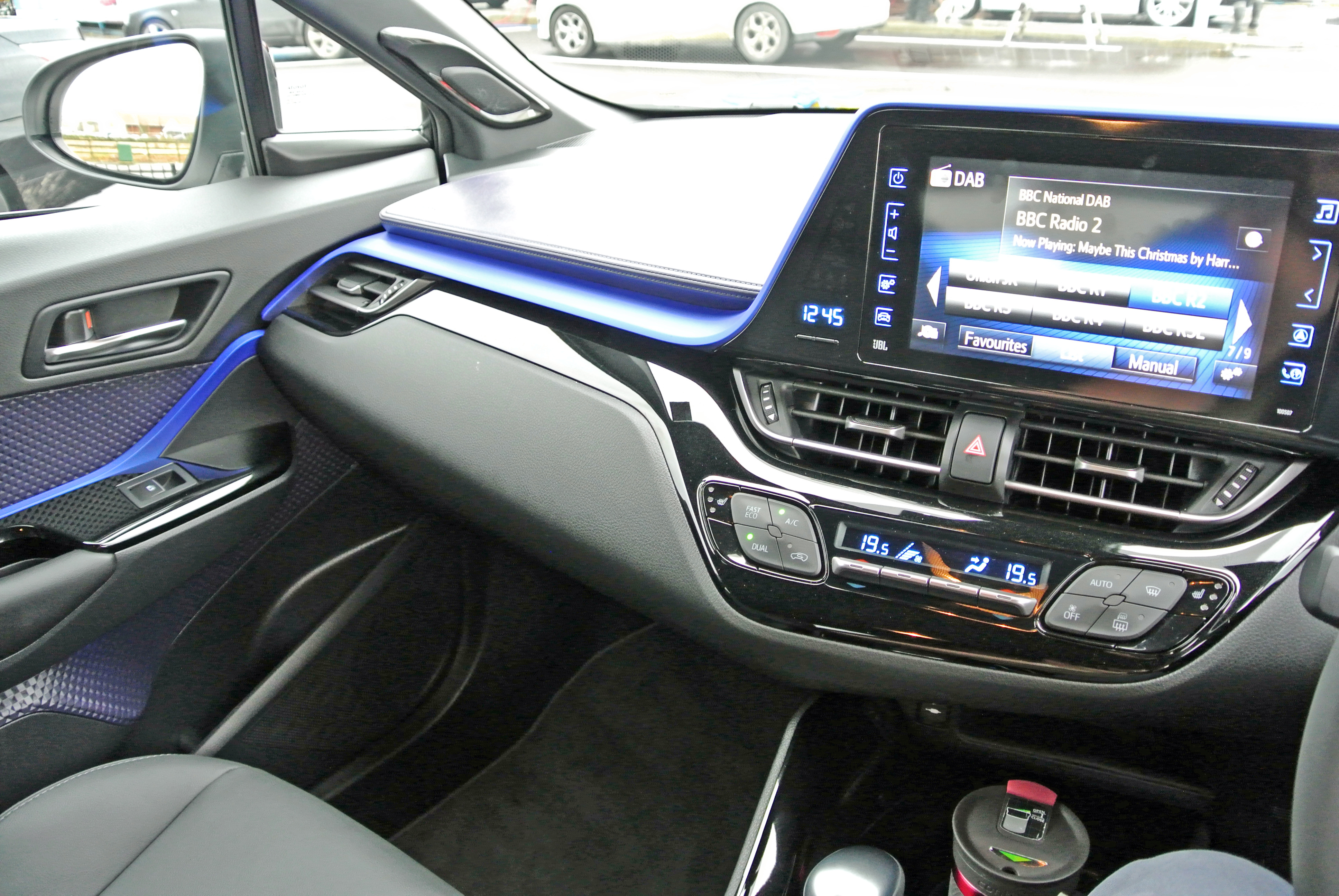 Ahead of the driver is the Toyota customary hybrid dashboard, with a speedometer on the right side and an efficiency meter matching it on the left. There is no rev-counter, which is the only real minor annoyance to me, even though I would tire of the familiar needle-near-the-redline enforced by the CVT transmission, so it is probably a more practical omission. Between the dials is the read-out for the on-board computer, accessed via micro-switches and rockers on the steering wheel cross-spokes. The lower centre console is finished in piano-black, with a pair of large diameter and thoughtfully LED illuminated cupholders (one ahead of, the other behind the automatic transmission selector). Possessing high levels of tactility, which generates a tremendous amount of driver engagement, the cockpit of the C-HR is the best place in which to reside of any car that I have tested in the past five years, even than the McLaren supercar. 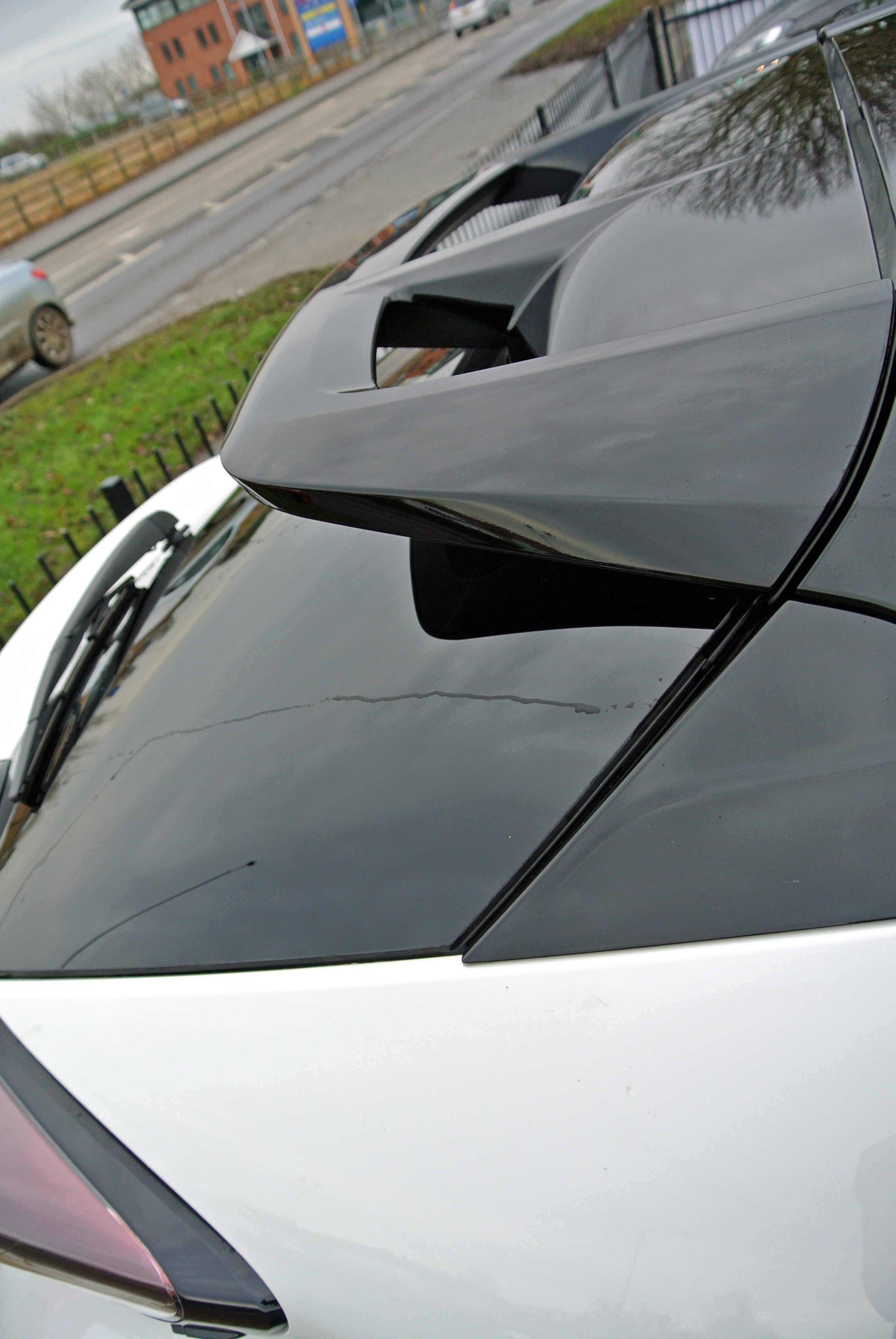 Although there is space in the rear, it feels significantly more cramped than in the light and airy front. The small windows do not alleviate the impression caused by the upwards lilt of the rear door frame and, with the dark grey roof-lining, over-the-shoulder checks by the driver are obscured slightly by the depth and width of the rear pillars, more so to the nearside than offside. On the other hand, the boot is large and easy to access, the rear seats folding to more than double the available space. A puncture repair kit sits in the space below the boot floor.

Beneath the bonnet is fairly typical Toyota hybrid fayre: a high-compression (13:1), four cylinder, twin cam, 16-valve petrol injected engine sits alongside an electric motor. The optimised but largely conventional internal combustion unit develops an unremarkable 97bhp for a 1.8-litre capacity, allied to 104lbs ft of torque. The Nickel-metal Hydride (NiMH) battery is located below the cabin floor and develops a maximum of 600v. It also produces an equivalent amount of power to the petrol engine, although, combined, the output is 117bhp, with the electric capacity almost doubling the available amount of torque, which allows instant karma, with early throttle depression. 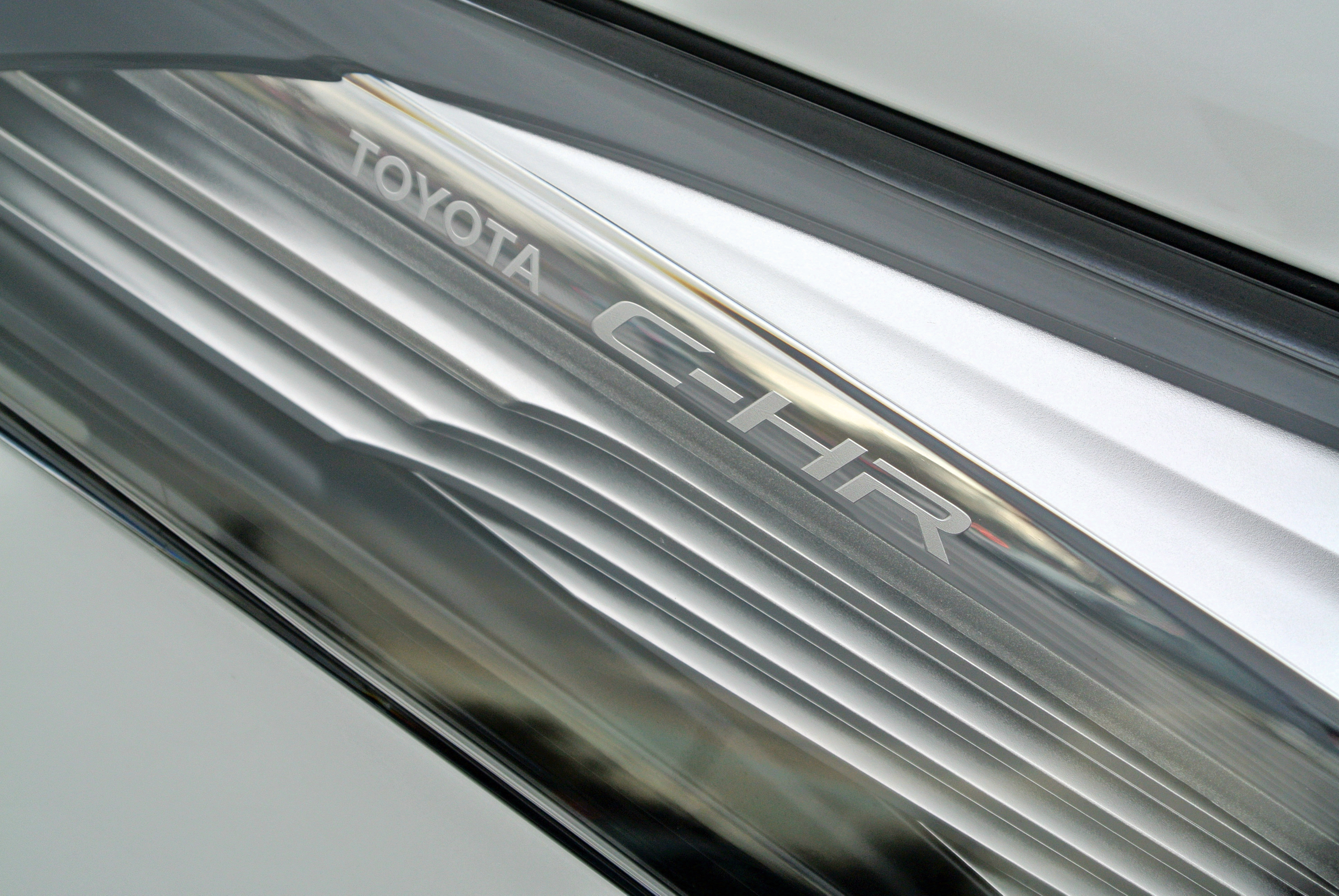 Remember that there are no gears to contend with, which means that testing the 0-60mph figure of 10.7 seconds is a seamless exercise, as long as you can tolerate the distant and frantic whining of the engine revving at its peak power figure of around 5,200rpm. Of course, it is not like that all of the time, as the driver soon becomes accustomed to modulating the accelerator pedal, when keeping up with the rest of the traffic and the C-HR settles into a high-speed cruise in a most relaxed manner. Its top speed is given as 105mph.

However, customers are attracted to Toyota’s familiar hybrid technology for the broader benefits it bestows, not least of which is decent fuel economy. Its Official Combined return is given as 72.4mpg, when riding on the 18-inch alloys of the test car (74.3mpg on 17s). While most hybrid owners enjoy donning the haloes they can assume, these figures are fantasyland, unless you exercise a degree of restraint. Driven hard, the C-HR will give around 47.6mpg, although more judicious motoring, with as much use of the limited EV mode (which does work well in town-centre traffic for a mile, or so) as is possible, should see a consistent 65mpg. The exhaust emissions figure is given as 87g/km, which will not be exempt from Road Fund Licence on registrations made after 31st March 2017 (a factor worth bearing in mind). It is worth highlighting that the outstanding 1.2-litre light-pressure turbo-petrol engine is also available in the C-HR, with both automatic and 4×4 transmission options. 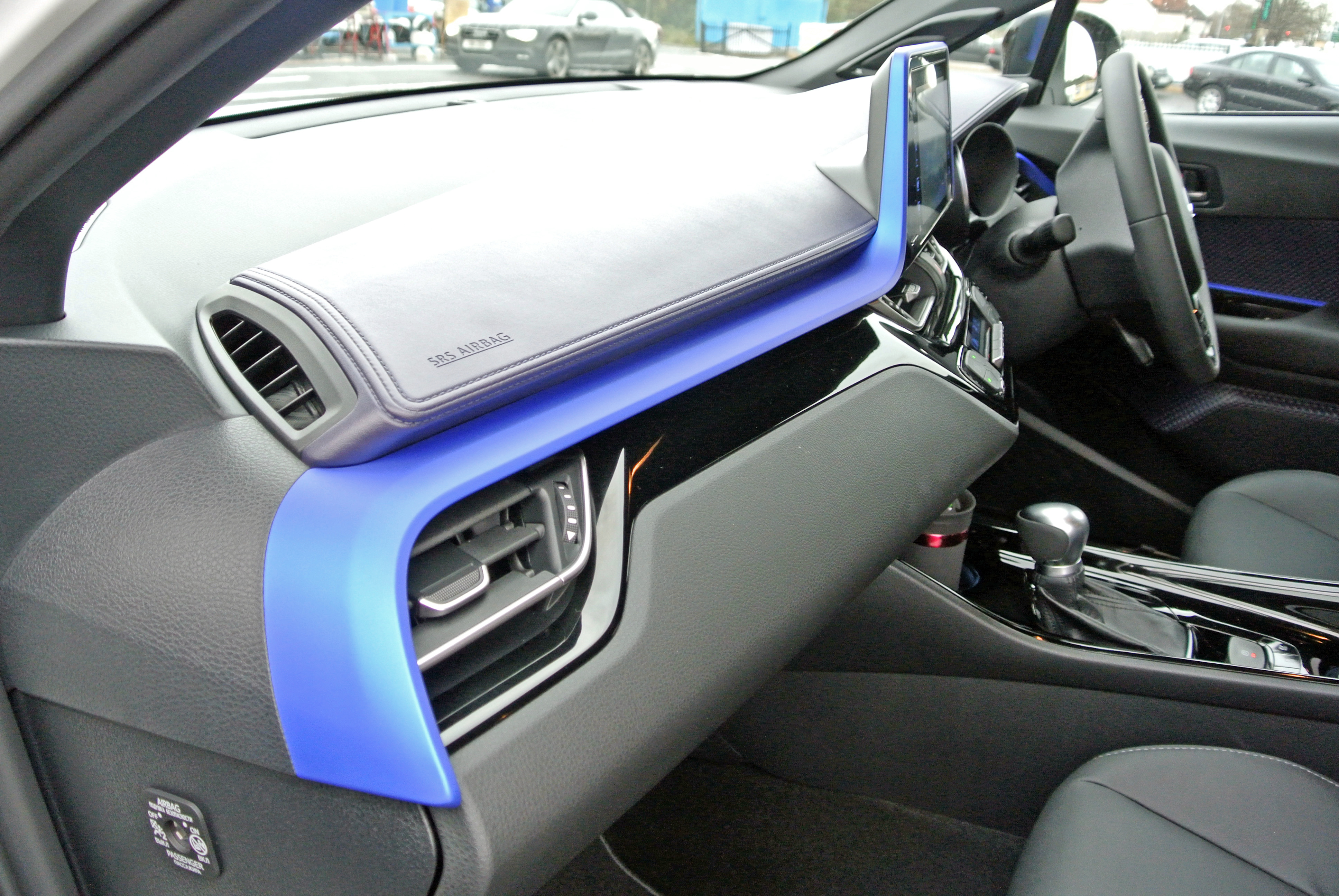 Away from the business end of the C-HR, its driveability is first-rate. Firm, roll-free but forgivingly compliant suspension is matched to deliciously accurate and well-weighted steering. Chuckability on the limit is excellent, the car responding faithfully to throttle input, despite the damping effects of its weighty drive-train. The simple truth is that the C-HR is fun, which is an adjective that I have not applied to a Toyota for almost 25 years.

Quite unashamedly, from a range that starts at £20,995, rising to £27,995 (the Excel trim Hybrid tested is £26,495), had I not acquired a new Suzuki Baleno just two months ago, C-HR is where I would have invested my money. I love its practicality, comfort and build quality. Its cabin is artful in its colour and textural strength and the car drives beautifully. The C-HR engages with the customer in a way that Toyota has not for many years. It is for those reasons, whether for business, or private use, that I make it my Car of 2016.