The Suzuki Vitara S is the ultimate monster crossover 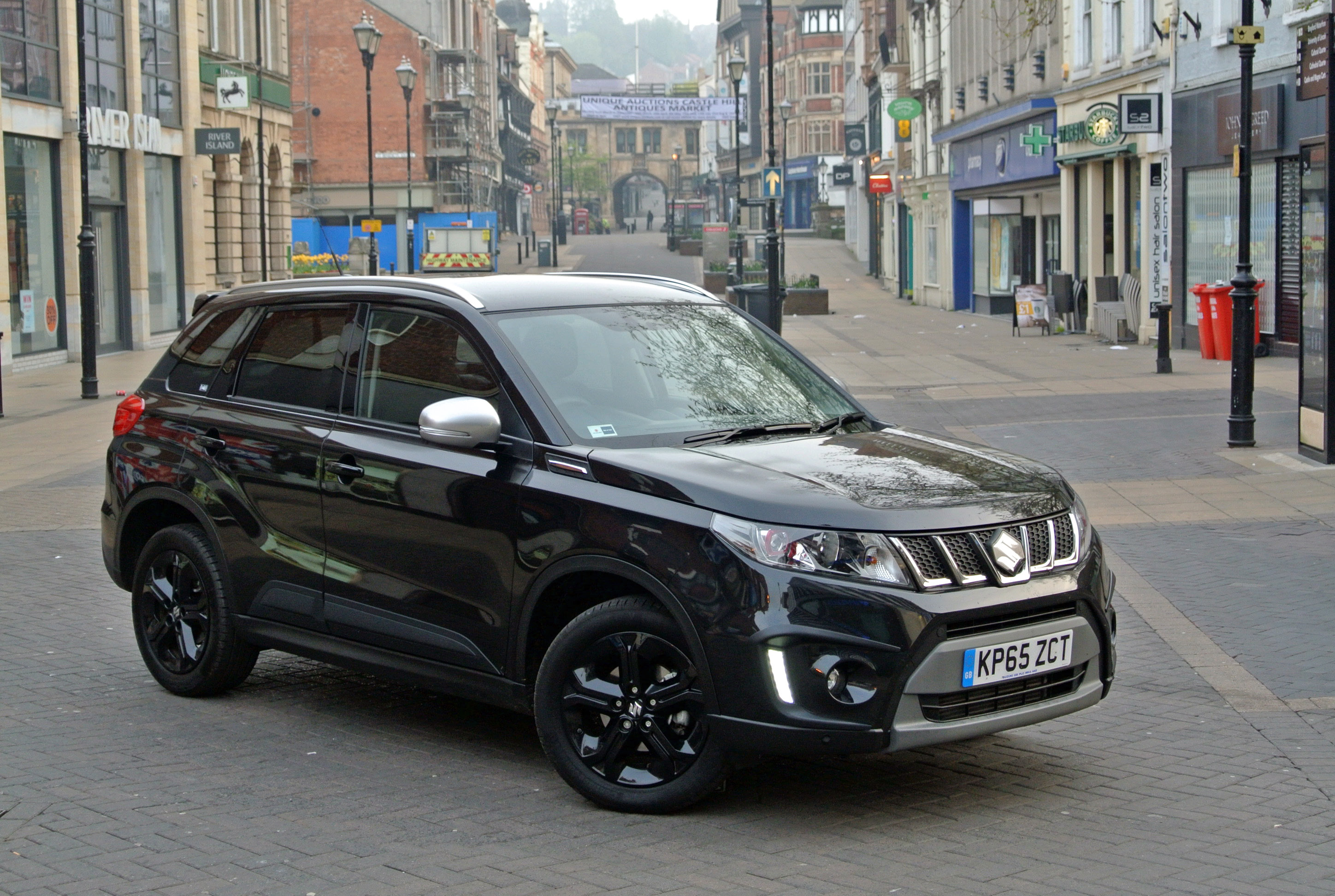 Having sampled the Vitara model on a race circuit and on wintry public roads, Iain Robertson elected to drive one to and from Northern Ireland, to ascertain its all-round competence.

If the entire concept of crossover is taken to its logical conclusion, there is only one model available in the UK to satisfy all of its parameters. As soon as the latest Suzuki Vitara arrived with me, I could not resist snapping it in the wide range of typical terrains that its owners should encounter during their tenures.

I liken the description ‘crossover’ to that of MPV. In some respects they are polar opposites and, while SUV might have application alongside either, it is also inappropriate. Crossover is actually quite clever. It is packed with adventury and even a soupcon of derring-do. While the SUV should be expected turn its hands to plough-sharing, the crossover is significantly more biased towards on-road stability, whether in 2WD, or 4WD forms.

Suzuki’s smart crossover is an on-demand 4×4 but I reckon that those drivers ‘in the know’ will twist the little dial between the front seats to access the ‘Sport’ setting, to make it their own default. In typical modern style, this switch tightens up the dynamic package, so that the throttle response becomes a little sharper and the electrically-assisted power steering increases its surgical accuracy by a couple of notches.

There is no issue with the suspension, because KYB, the Japanese damping expert, already supplies Suzuki with the best darned dampers in the world. Their bounce and rebound settings provide a high degree of linear responsiveness, which ensures that even mid-corner bumps do not upset the first-rate composure. Driving across to mid-Wales to tackle the exquisite A5, past Llangollen and Betws-y-Coed, en-route to the Holyhead Ferry Terminal, on Anglesey, the benefits of sound suspension engineering are felt in all of their fine feedback excellence.

Mated to ideally rated coil springs fore and aft, the ride quality is moderately firm, possessing a usefully sporting edge, while body-roll is maintained at a comfortable level. It is worth highlighting that suspension dive under braking is also well controlled, with power-on squat appropriately balanced to it. The benefits of the delivered, first-rate stability are felt at all speeds and help the driver to feel both engaged with the car, notably on tortuous Welsh back-doubles, but also less upset and weary than might be the case in piloting a lesser crossover in the same way. 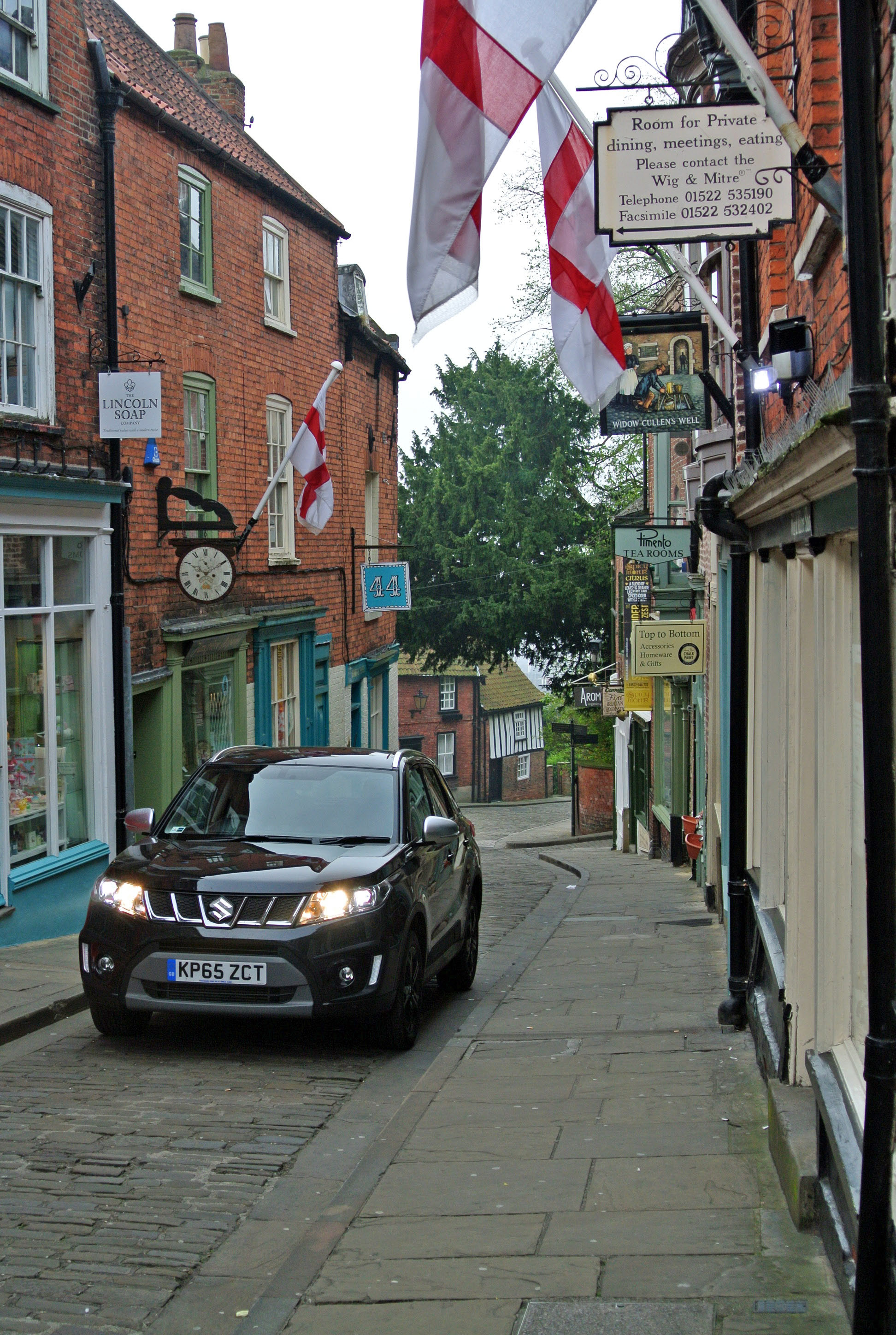 Another aspect that assists the driver immensely is the seat position. At two metres tall, my default setting is always to the lowest of the height adjustable positions, with a hint of recline and the seat base as far back on the runners as it can locate securely. The seats are clad in a grippy Alcantara-like material and are thin but moderately well-padded. As it happens, the driver’s seat is comfortable for me, allowing plenty of space beneath the rake and reach adjustable steering wheel for my legs and feet to work the foot pedals. There is space for a resting clutch foot, while rear seat occupants still have plenty of room for their feet and legs.

The cabin offers decent height and width, despite the fairly compact exterior dimensions of the Vitara, which also promote easy entry and egress to the cabin. While on that subject, in typically thoughtful Suzuki style, the boot floor can be height adjusted, with space below a false floor for personal possessions, while the higher level is almost flush with the rear bumper height, making the loading and unloading of items much easier on the spine. A pair of removable panels allow either extra space for smaller items, or a wider boot floor, depending on how you use them. 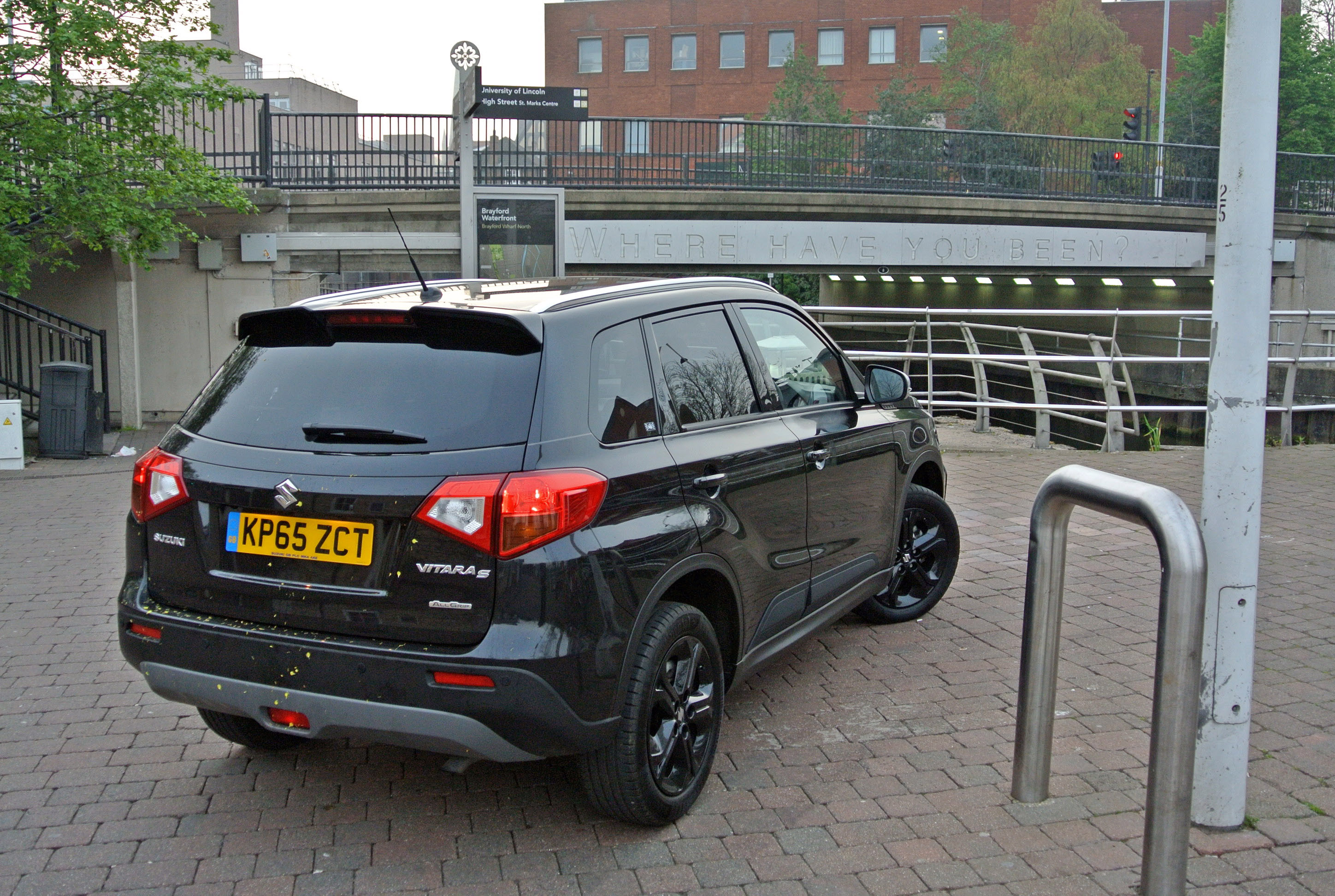 Naturally, the driving pleasure is helped by a healthy, 137bhp power output from the 1.4-litre (1,373cc) turbocharged petrol engine. Another benefit of the crossover scene is smaller capacity motors that do not breathe as heavily as the bigger alternatives, yet, in boosted form, they can deliver diesel-like fuel economy figures, allied to on-tap zestiness. Although the Official Combined figure is given as 52.3mpg, which I know from past experience is actually within reach of the frugal motorist, my return of 42.3mpg overall is more than just satisfactory, considering that I did extend the performance envelope on as many occasions as I could make possible.

Armed with 162lbs ft of torque, the near-100bhp/litre displacement engine works exceptionally strongly at low revs. In fact, the torque curve is virtually flat from just below 1500rpm, all the way to 4200rpm, which underscores its potential as a tow-car. While I was not towing to Ireland, I was able to appreciate its hill-climbing capabilities driving through North Wales, which scarcely necessitated dropping the sweet-shifting six-speed gearbox into lower ratios to maintain momentum and the mid-range pull is strong.

Its posted CO2 rating of 127g/km suggests an affordable £110 annual VED rate (Band D; at present the first year is free of charge). However, the light-pressure turbocharger, the conventional off-boost effects of which cannot be felt, enables a maximum speed in the order of 128mph, after having despatched the 0-60mph sprint in around 8.8 seconds. Both figures are marginally better than the factory stated ones. However, that they are also eminently accessible and repeatable highlights another positive crossover aspect that bears out my up-front statement about the Vitara. 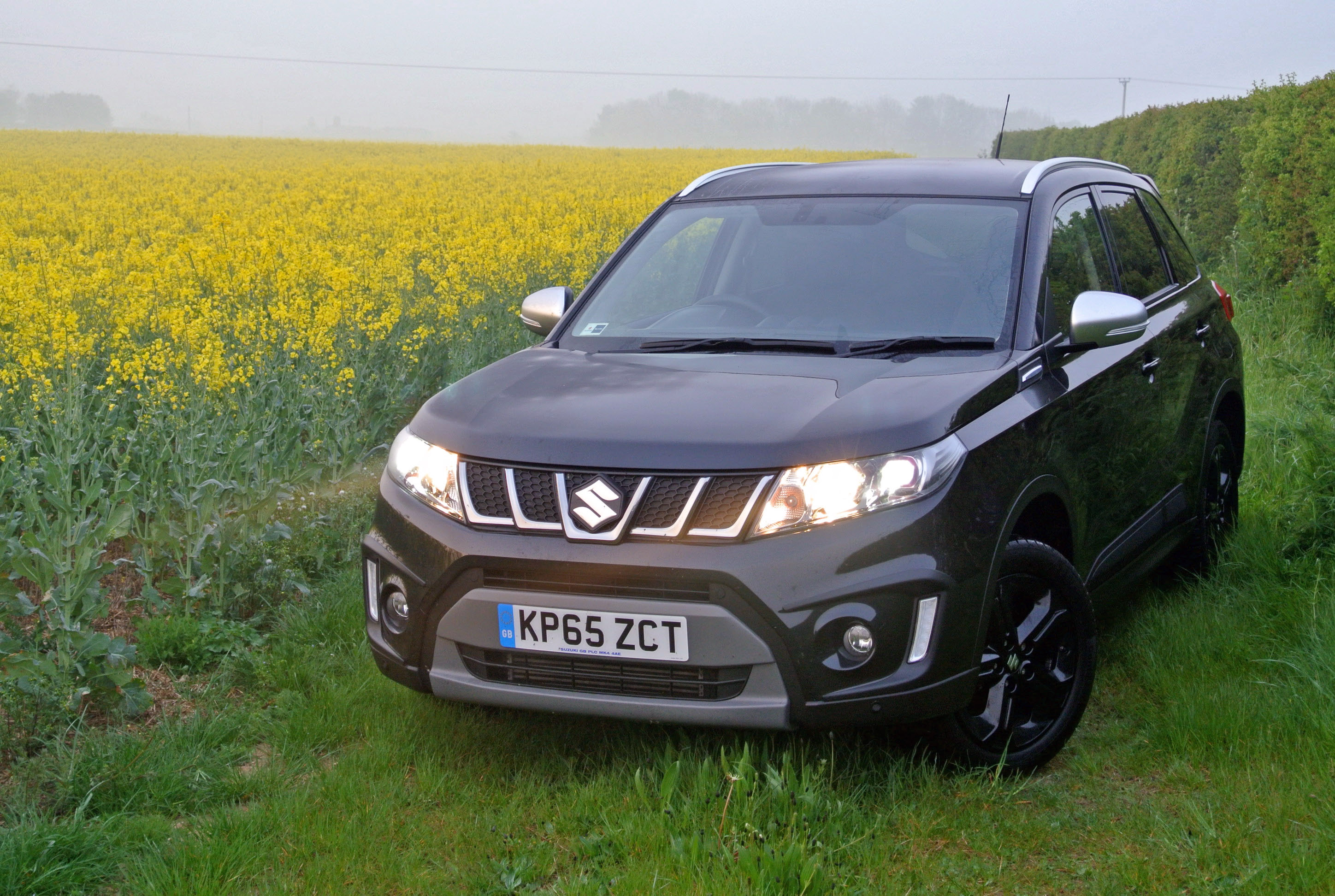 You see, an SUV, because of its more compromised nature, cannot deliver the sporting quality of a warmed-over family hatchback. Just reverting for a moment, I did mention MPV earlier, because I also ought to underscore the value of cars like the VW Golf+, which is not a full seven-seater class of car, although it does feature a higher roofline and more significant luggage space over the lesser Golf. That particular model is also a crossover, although not in a ‘go off-road’ manner, which is where the Vitara scores bonus points.

Once on the new M3, heading north from Dublin to Belfast, my destination, the Vitara proved its cruising capabilities to perfection. Equipped with distance cruise control that can be adjusted, complete with autonomous braking, thanks to fairly light traffic loads in the Republic, it was possible to relax at a smidgen over 70mph indicated, the engine turning over at well below 3000rpm, while requiring only attention to the steering wheel, to pass slower vehicles and negotiate the long, open bends on the motorway. Everything else was in ’automated’ mode. Again, the pliant ride quality provided a relaxing rate of progress. 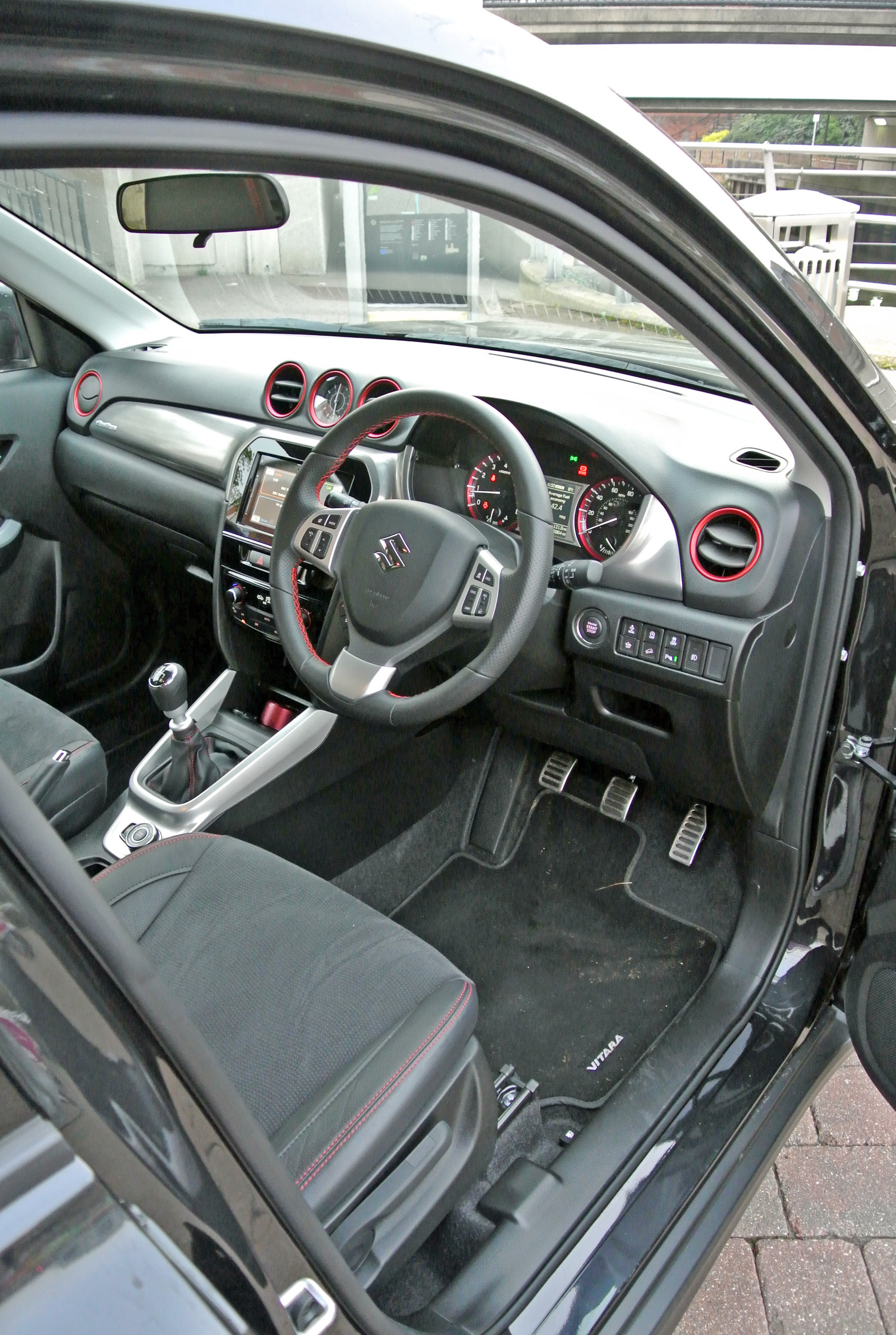 On the busier roads of the North, I elected to resort to full manual control and, in Belfast, used the car’s neat proportions and wondrous pointiness to handle  city centre traffic to perfection. The Vitara’s dimensions (4.2m long, 1.8m wide) make it very easy to judge and a delight to park, especially with the parking sensors and rearward reversing camera, although all-around visibility is excellent. In fact, when you contemplate the car’s specification, complete with Bluetooth compatibility (even though I wish that it had a separate CD player), climate control and even the £430 extra charge for the pearl-effect black paint, its on-road price tag of £21,329 represents excellent value for money in an over-crowded market sector, where most of the car’s rivals cost a lot more.

Making a near-700 miles of driving so pleasurable, the latest Suzuki Vitara 1.4 Boosterjet S is in the upper echelon of the affordable, multi-surface, all-environments class of transport. It is a handy car. It is good looking, without being forceful, which fits well with a company car ethos. It is exceptionally comfortable and spacious enough for either the family or whatever you feel like transporting in its sizeable boot. However, its sporty balance and cost-effectiveness make it a genuine fun car and beg the question, why can other family/business cars not be light-hearted and pleasant? I rated the Vitara highly before my Irish ‘jig’…I now believe it to be the best of the best for all the right reasons.