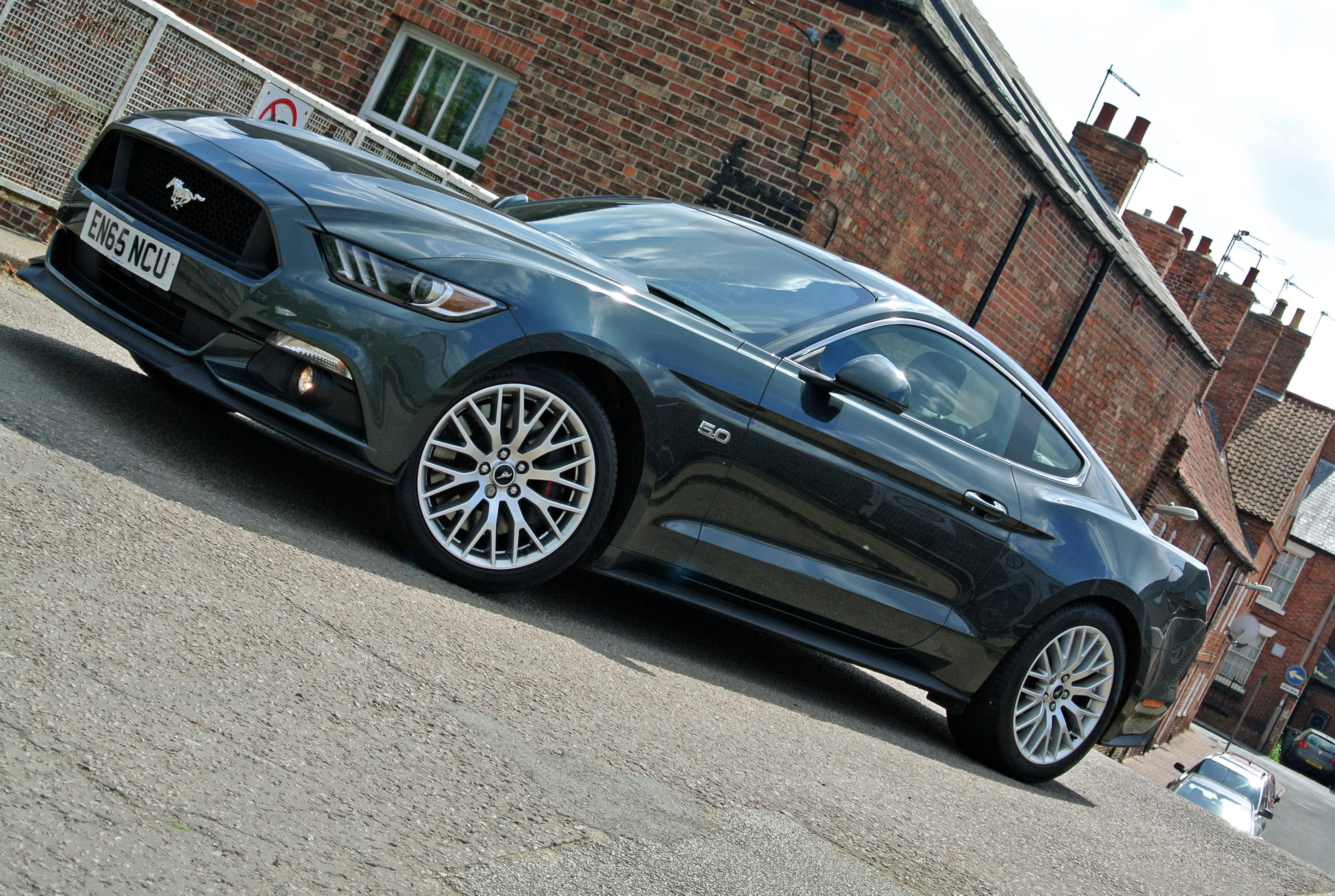 Cross-border product sharing is a reality at Ford Motor Company, which means that the Americans get Transit and we (finally) receive the Mustang, which, states Iain Robertson, is now in right-hand-drive form.

Vinyl is back. In case you were unaware, the real growth in the music industry of the past 12 months has come from vigorous sales of long-playing records that rotate on a conventional deck at around 33.3rpm. While my aged auntie might believe that the CD-drawer on her domestic computer is the perfect size and location for carrying a mug of tea (she did call me once to ask about a USB socket, only to inform me that it was just below the tray for her morning cuppa), many teenagers will have no idea what an LP is and thirty-three-and-a-third is simply too pedestrian for most CDs. The downloaders are in a category of their own.

Sale-rooms the length and breadth of our country are bristling with buyers keen to acquire the latest ‘retro-chic’ offerings, from radiograms to revolving chairs and radiators to toasters, most of which items were discarded by our parents, because they wanted to modernise. While the prices are keen, they are also on the ‘up’ escalator as purveyors and auctioneers have recognised both diminishing quantities and increased demands, notably from the ‘fashionistas’.

Both the latest high-end and popular style magazines are packed with 1950s’ and 1960s’ ephemera and most photographic set designs are simply incomplete ‘dahling’, unless they feature a faintly Dan-Dare-referenced ‘space-age-esque’ item from prior to the time when men (and women) did actually venture into the stratosphere. Of course, retrospective references are very much an element of the current style directory, which also explains much of the move from cold and clammy digital back to the characterful warmth of analogue, not just for reasons of quirkiness.

Of course, the motorcar scene, while not exactly rammed with retro-chic, does boast its active participants. One of the most obvious is the BMW Mini, even though it is now looking too scarily comic-book to even warrant serious consideration. The Fiat 500 is probably a better example. Of equal import is the Volkswagen Beetle, where even the hardware is thoroughly swapped, in order that it fits with the archetypal mainstream Golf layout. The latest Alfa Romeo also leans heavily on its past for superficial design aspects. 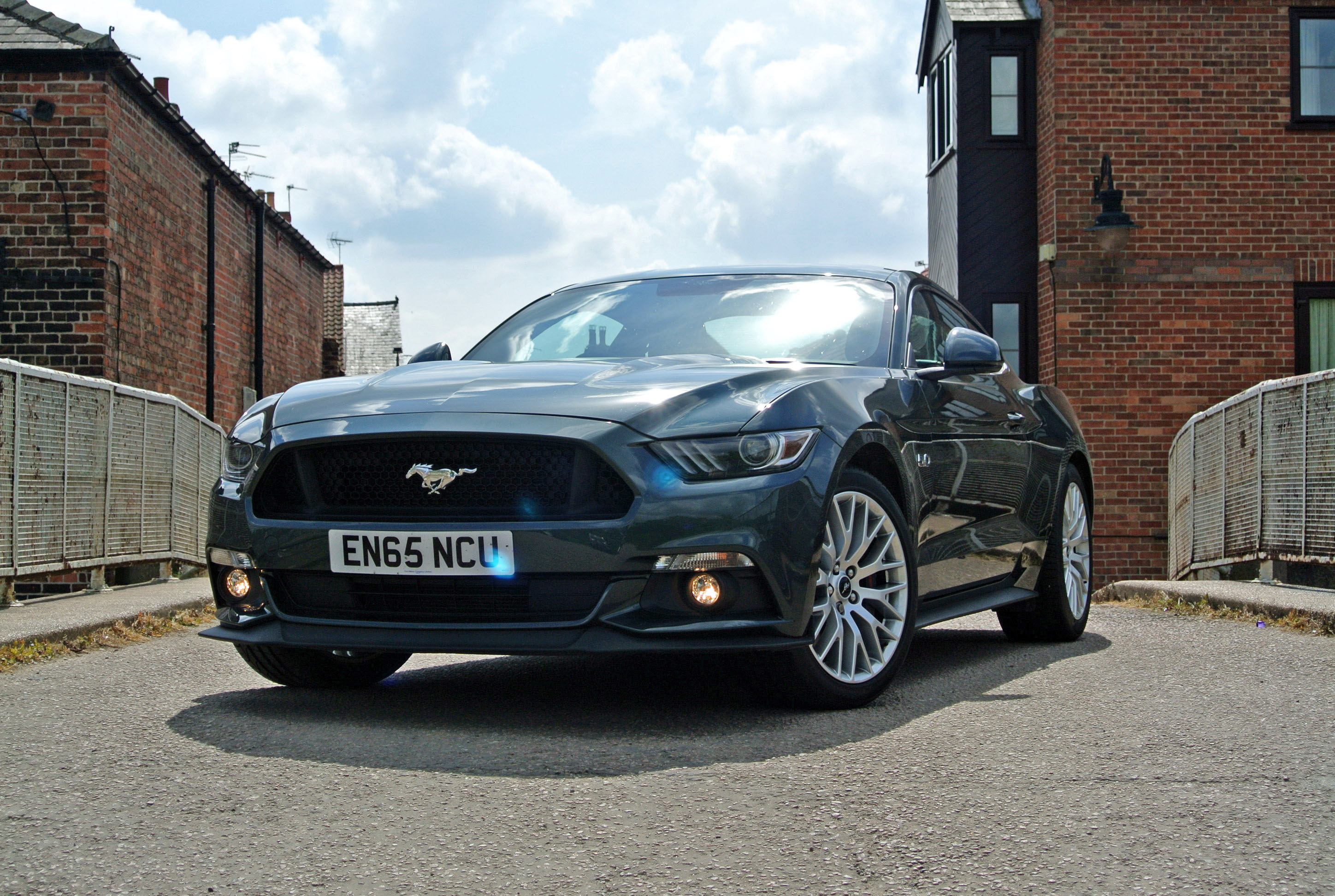 The common thread is retro and the motor industry is still dallying with it, which suggests that it continues to possess mobility. This is never more so than in North America, where a theme epitomised by the ‘Pony Car’, in essence the Ford Mustang of 1964, would be copied by General Motors and Chrysler Corporation, all of which continue to latch onto retrospection, with as much alacrity, as a hungry babe to its mother’s swollen breast.

Naturally, retro also equates to profits and premium pricing. The numbers will never be at biscuit levels but a very healthy margin does help to offset losses incurred in the volume end of the market, where share reigns all-supreme and fleet sales keep a brand afloat. Ford’s decision is not one of bravery but, rather, of ‘market push’. The far from enigmatic Mustang model is an ideal vehicle to provide an umbrella status precisely where it is needed most. Thus, the UK and European markets are appropriate targets.

When you consider that ’Stang prices weigh-in at comfortably less than $25k in their home market (£17,139, at current rate of exchange), it might be considered fairly an affront, perhaps even gross profiteering by Ford of Britain, to ask for no less than £38,885 for the lovely smoky-green Mustang, in right-hand drive, that you see before you now. To be fair, it is powered by a V8 and not a turbo four-pot engine, or the even less dramatic V6, although the ‘Bullitt’ paint job (unique in the UK, by the way) at £595 and the £1,795 charged for the Shaker-Pro stereo, sat-nav, chilled seats, reverse parking sensors, 19-inch diameter alloys and the window bright work are also included.

Interestingly, when I asked how much some observers believed it to cost, the rates varied between £42,000 and £55,000. While I am not proposing that FoMoCo ought to realign its prices (as the company does via ‘market pricing’ almost all of the rest of its model range), it does suggest that perceptions of Mustang value are markedly higher than the reality. It is a fortunate position within which Ford finds itself, because I have never reached that level of affordability with any £18k Fiesta, or £26k Focus! Sadly, for Ford, I believe that £38.8k is far too expensive, because there does not exist much more than £20k’s worth of nostalgia in that car, complete with the spirit of enigmatic actor, Steve McQueen, attached to it.

Yet, that is not to say that I did not revel in every mile run beneath its Pirelli P-Zero tyres, which are an optimum (for which you can read ‘costly’) cover for a seriously grippy chassis and a bit of a bone-rattling ride quality. I promised myself that I would drive the car soberly but every accidental throttle blip releases that endorphin, which might isolate you from the cost-per-mile incurred by a 22.9mpg average fuel return but which fails to resist helpless, out-aloud laughter, as the V8 cacophony builds. 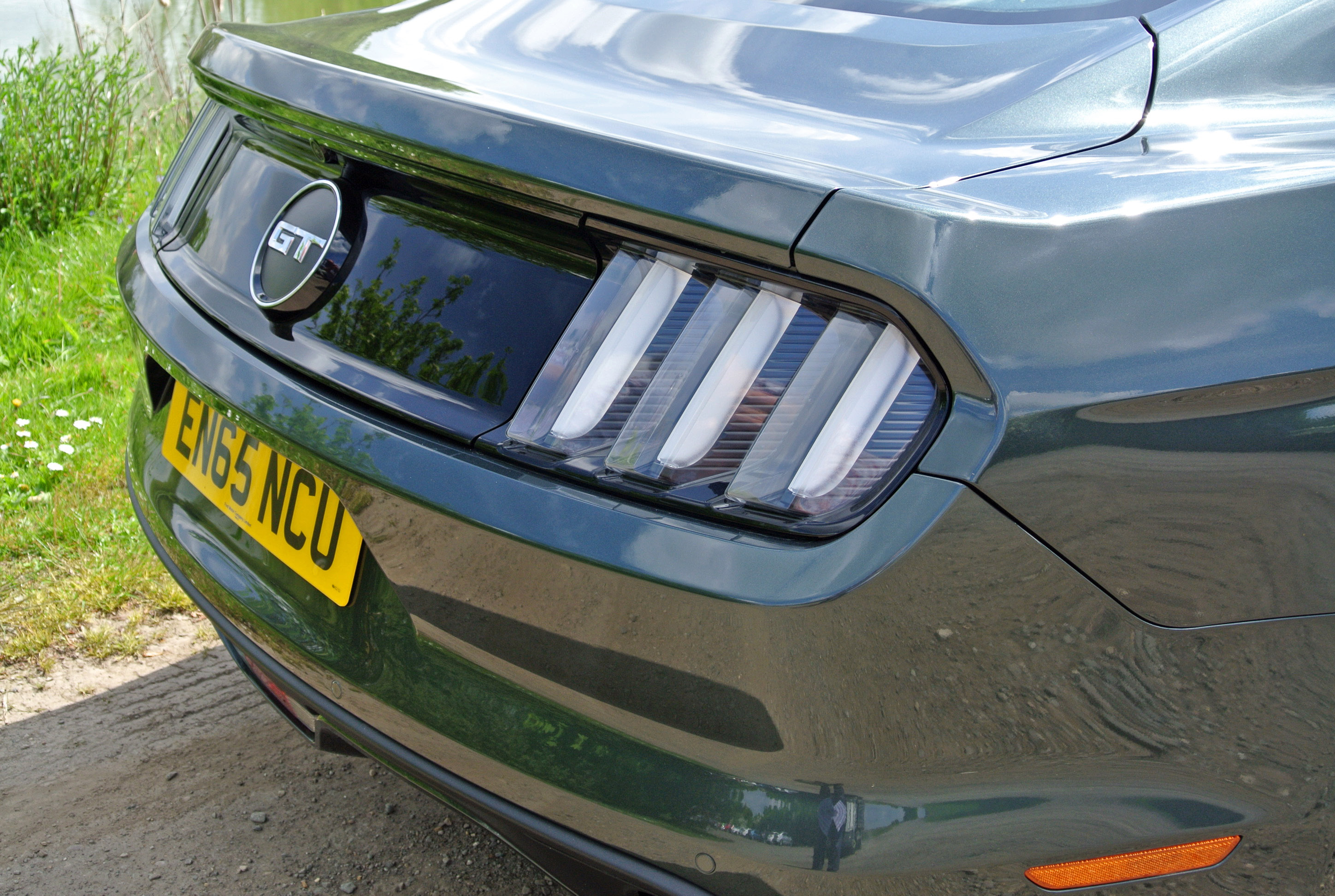 The fact remains that, pony car clichés apart, every full-throttle application results in a Bo and Luke Duke ‘Yee-harr!’, as the 305ci (5.0-litres) capacity, 32-valve, four-cam, V8 engine breathes in and exhales deeply, to exhibit its 417bhp and 391lbs ft of pulling potency. Mind you, it needs it to motivate a 1.6 tonnes kerb weight. However, you will not hear me complaining about any lack of grunt, especially as the 2016 Mustang can despatch the 0-60mph acceleration benchmark in around 4.7 seconds, before topping out at around 160mph (on a two-miles long disused runway, I did manage an indicated 175mph).

Winding all of that prodigious punch through a six-speed, heavy-duty automatic transmission (with steering wheel mounted paddles) is unproblematic, as the rear tyres squirm and shimmy very-so-slightly, while the grip and stability control are overcome by torque and swoon gently to that basso-profundo beat…some of which is transferred into the cabin (via a Ford patented ‘Sound Tube’) for added visceral thrill. There is nothing subtle about it, in the manner of a chunky, slightly balding Teutonic R8, or even a leggy Italianate, red-headed 360. Instead, it is farting beans around the campfire and duelling banjos from both exhaust tailpipes…or, more likely, storm drainpipes. 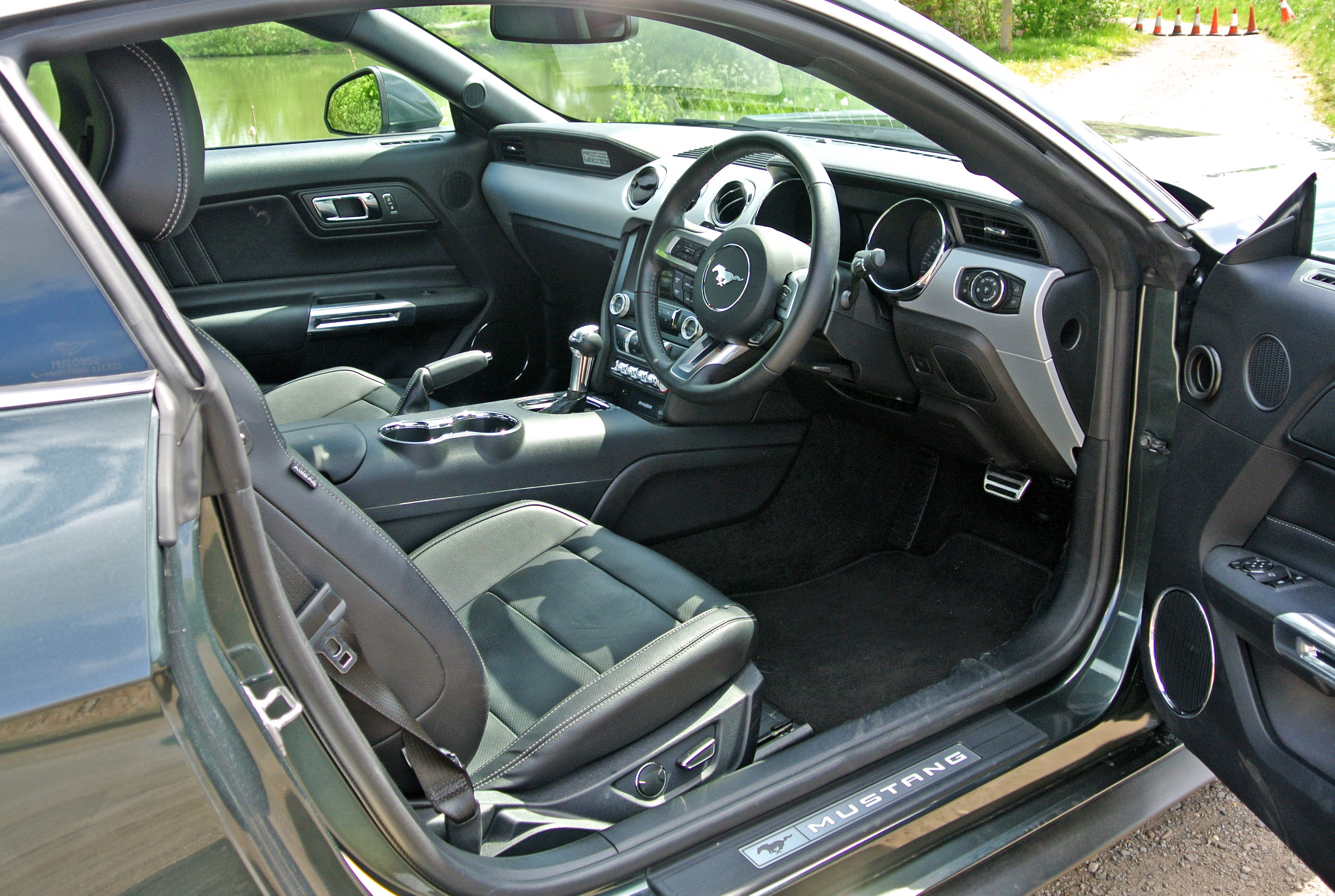 Although much fuss was made about the very original Mustang of 52 years ago, its handling was limited by its rear cart springs and very simple architecture, steered by recirculating-ball and degrees of under-steering ‘slop’ that no English country lane would be able to tolerate. The latest right-hooker is a jim-dandy of a machine, being sophisticated and electronically managed to the hilt…even though you can still feel the slight uncouthness of its innate breeding.

It is exceptionally well-equipped, as long as you can tolerate acres of grey moulded plastic, pseudo-hide and silvered polyethylene trim. The fit and finish is not brilliant and certainly not to a near-£40k price demand but, then, it is a Mustang, the very name of which seems to liberate it from all manner of normalcy and expectancy. While my right foot is more than capable of putting it into one, especially in ‘Race’ setting, it is a car that puts me into a tailspin, with every angle of approach. 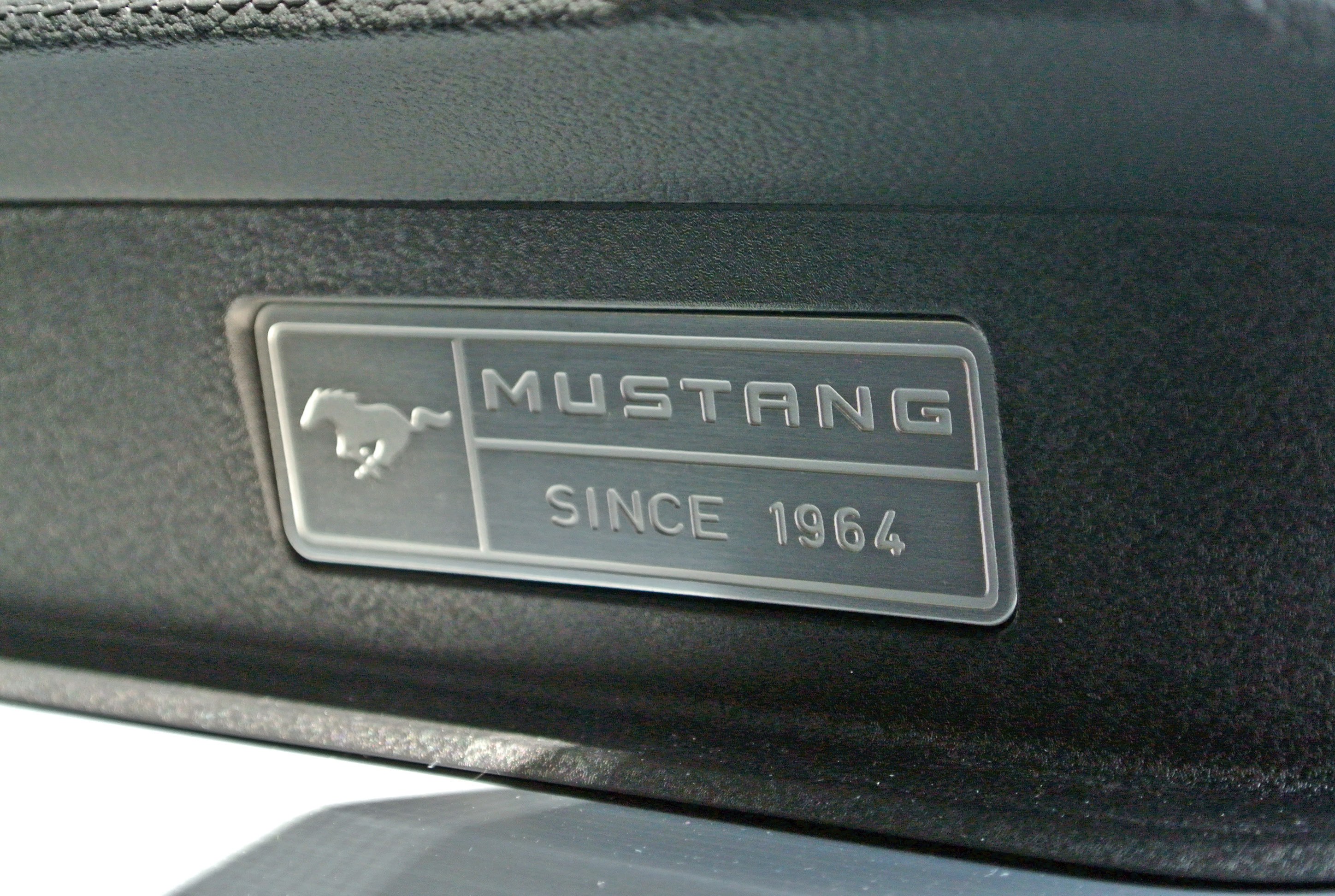 It is attractive, of that there is no doubt. It possesses history, which can be a useful addendum. It is flaming greedy to live with and I struggled with its thirst, yet, I would drive a microcar for six days a week, if it meant that I could have an anti-frustration burn-out every Sunday afternoon for an hour or two. Above all, it is Ford Mustang and logic needs to be flung out with the bathwater.

Not exactly a technological tour-de-force, if you want that, head into Europe, or Japan, the Ford Mustang is one of those down-home, honest-to-goodness, automotive icons that defies comparison with anything but its own type. Of course, it has been hyped to kingdom come but that is also part of its appeal. As the man from that varnish company states, ‘It does what it says on the tin’ and, to be frank, you cannot ask for much more than that. The smile factor is immense and, while it does not exactly represent gilt-edged value to me, it has a sterling silver heart and burnished metal workings. If you were to spoil yourself business car-wise, there would be fewer more satisfying means.

I omitted to mention that the door mirror housings also cast a Mustang image onto the roadway at night time…lovely!