The world motor industry is trying very hard to place a finger on the pulse of personal mobility, suggests Iain Robertson, and the important ‘business/executive car’ scene is where Ford is investing heavily.

Amid all of the hubbub surrounding the downward fluctuations in fossil fuel pump prices, it is abundantly clear that one aspect alone is capable of grabbing banner headlines. We should all analyse the developments. Our government is not alone in being forced to address its ‘Clean Air’ policy but, regardless of the pressure under which it is placed, a lip service response is simply not the answer.

Electric Vehicles (or EVs) form an apparently vital element of our future mobility. Yet, using grid-supplied electricity, their benefits remain in question, as long as our nation continues to shy away from nuclear power as a fuel source. Within a confusion of ‘eco-friendly’ transport, of which Hydrogen Fuel Cell that emits just water (H20) as a by-product of its combustion process is but one clear winner, a sense of reality needs to be introduced. While the number of hydrogen stations continues to increase at a snail’s pace, even accelerating the build programme to one-a-week, rather than the current one-every-three-months, will neither satisfy potential demand, nor resolve the impact of pump-to-wheel grubbiness.

You see, most of today’s hydrogen is produced as a by-product of cracking fossil fuels, so what is the point? Just plugging into a convenient domestic DC outlet might look like a positive step, yet it misses the target by a long chalk. While battery developments are increasing in type slowly but surely, whether operated by Nickel-Metal Hydride, Lithium-Ion, or Lead-Acid media, recharging still relies on a fossil-fuelled national grid.

However, other issues are being brought to bear, such as fears that our grid might prove incapable of providing enough electricity to satisfy consumer demand…and that is before we even contemplate a transport future fuelled by Sr. Volta’s, or Mr Faraday’s harnessing of one of nature’s greatest gifts. While Messrs Edison and Swan may have developed the electric light-bulb by trans-Atlantic, osmotic means in the late-1800s, the simple truth is that the game has hardly moved on ecstatically since.

Yet, the motor industry has one development that can serve purpose and it has been doing so quite fruitfully since the late-1990s. We call it ‘hybrid’. Just as the soya bean proved a point in extending the value of natural proteins in the food industry, although I do question the viability of meat-eaters changing their habits so entirely that they adopt a vegetable as a means of life support, the hybrid motorcar actually possesses propulsive potency that will not grey your hair and promote pallid complexions as the soya bean does for the air-punching vegetarian minority. What’s more, it does not suffer from a paucity of flavour and substance.

The principles of hybrid engine technology are well proven. Alongside a largely familiar, although majorly efficiency-enhanced, fossil-fuel internal combustion drive unit sits an electric engine. In its most recent ‘ultimate’ form, although I believe that ‘ultimate’ is a sorely limiting descript, a ‘plug-in’ development allied to a bolder battery pack responds to ‘fuel and range anxiety’ issues. In many ways, this is an arse-backwards route to survival, when survival relates to fast-diminishing natural resources.

The core problem that we have all been contributing to lies in the fact that it took millions of years to create fossil fuels from crushed dead trees and sea-shells, while, in less than a century, we have managed to rape the world’s resultant resource pool to virtual extinction. We are pretty good at that, it seems, and no matter by how much pretty yellow rapeseed, or luscious blue linseed fields colour the palette of our countryside, feeding both humans and their modes of transport has reached a critical point.

The simple truth is that even the value of attainable technology, such as hybrid engineering, is only a palliative, or a placebo, a convenient half-way house towards reducing a reliance on fossil fuels. As ground-breaking, for Ford Motor Company at least, as the Mondeo Hybrid is, its parameters are someway off target. Please do not misunderstand my critique. This Mondeo is a great machine but it remains a half-hearted sop, rather than a means to a positive end. 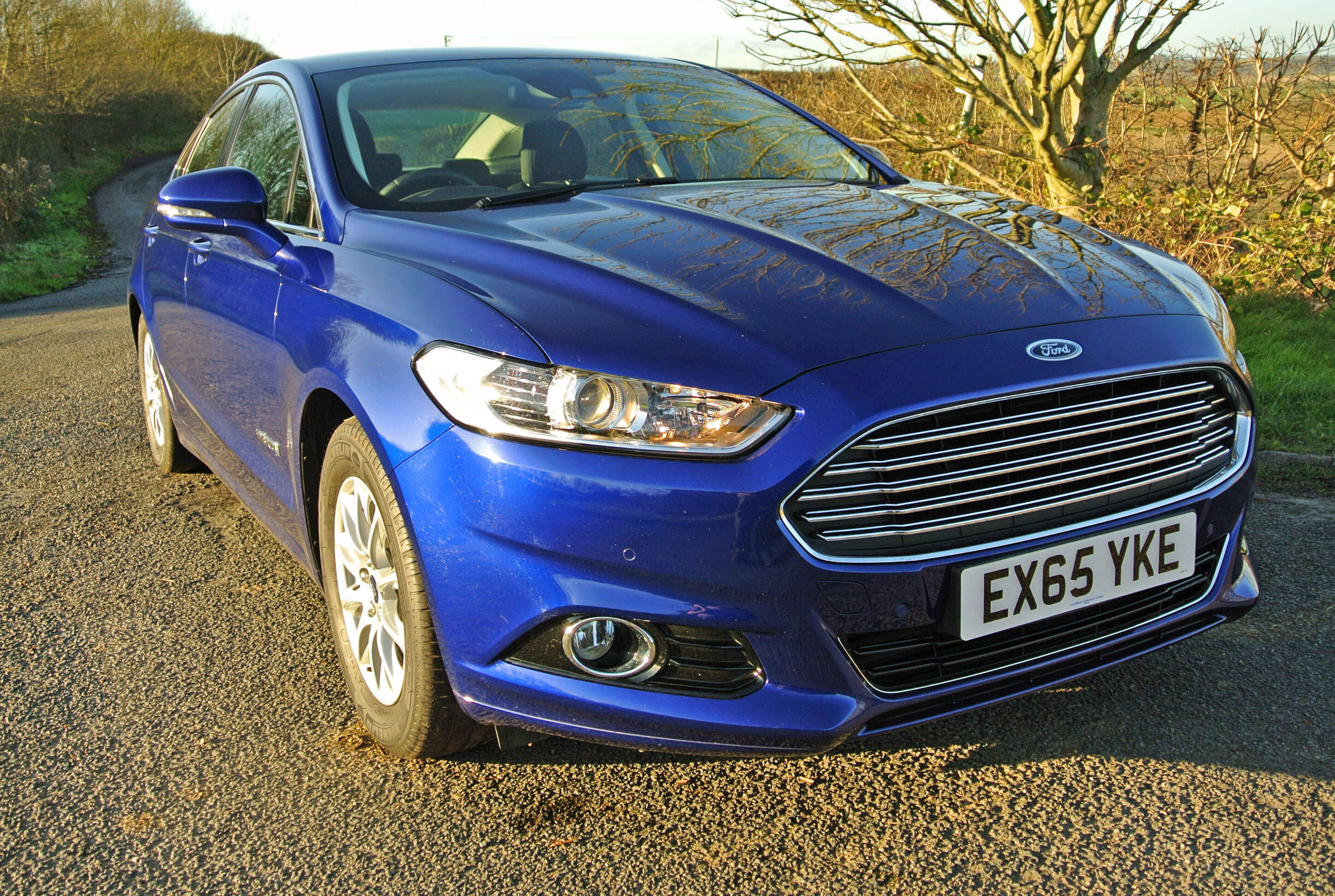 Personally, I believe that hybrid motorcars have a more realistic future than normal diesel, or petrol-fuelled versions. In the case of the Mondeo, aided by a price parity with its conventional siblings (£26,290, as tested), which is a step in the right direction, as it affects the back pocket, the driveability of petrol is undiminished, while diesel particulate fears are also alleviated. Yet, in terms of frugality, while an average return of around 50mpg (despite a stated Official Combined figure approaching 100mpg) is a significant improvement over a conventional 2.0-litre petrol model, a similarly driven diesel variant should attain the same and probably better figures in an identical mix of town and country driving conditions.

The beauty of the Mondeo Hybrid lies in its virtually limitless amount of driving potential in EV mode…as long as the battery pack remains in a more than 20% charge level. The encouragement to monitor and drive in EV mode as much as feasible comes via a growing vine tree graphic in the right-hand dashboard read-out, which can be turned at the depression of a convenient thumb-switch into a bar graph, or alternative performance monitors…for as long as the battery can hold its charge. Apart from the ‘optimised’ 2.0-litre petrol unit, recharging comes from both regenerative braking and ‘throttle-off’ activities. Seeking downhill gradients and braking opportunities become vital. 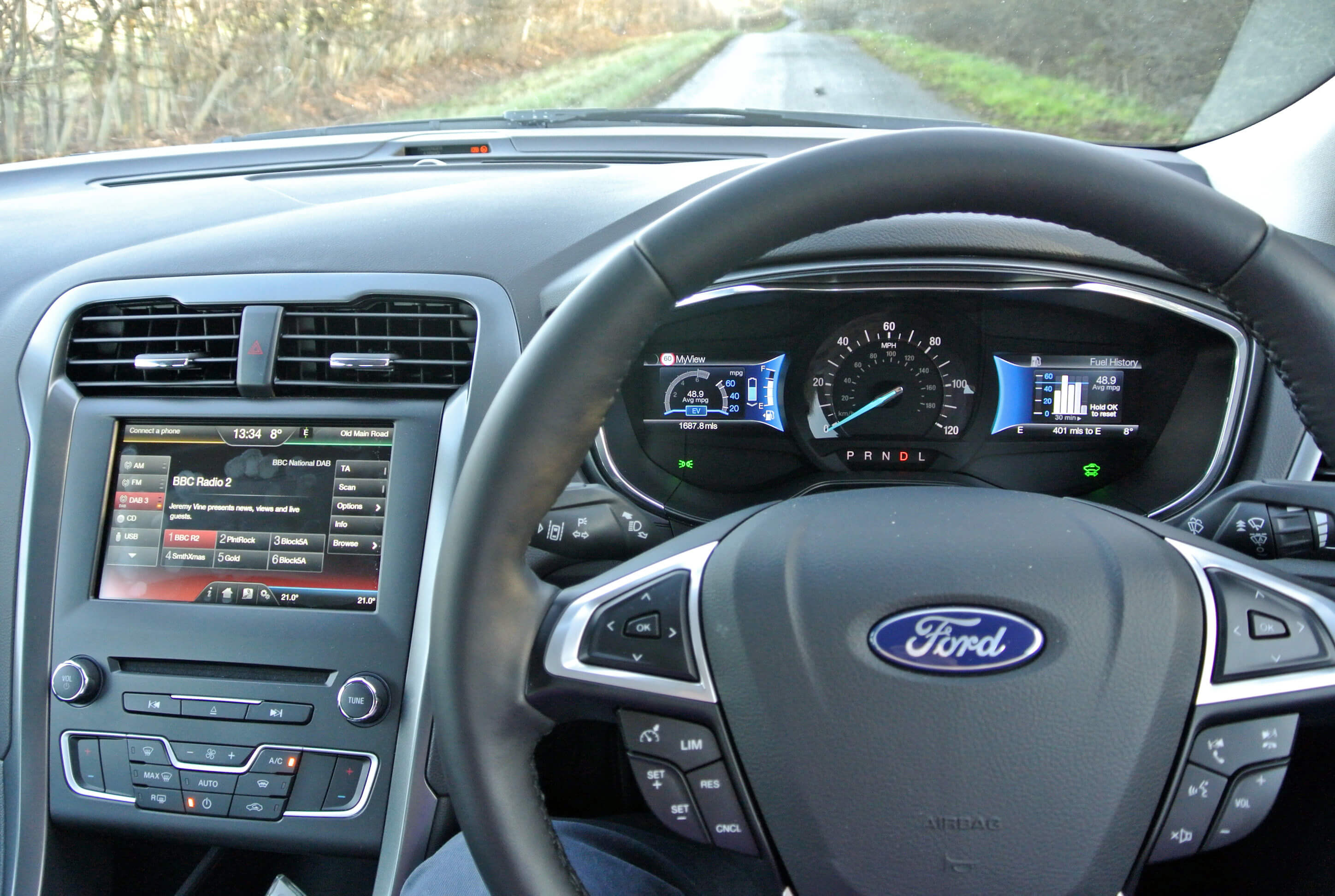 Where the Mondeo scores some useful points is that a 70mph cruise can be carried out in either light throttle fuel-sipping, or EV modes. The transition between them is almost imperceptible but the sense of satisfaction when the engine rev-counter hits ‘zero’ can strike at the bounds of ecstasy. Okay. We all appreciate that this is ‘kidology’ and it certainly appeals to the child within but it is nice to note that the CO2 exhaust emissions reading of 99g/km is markedly lower than for either of the purely fossil-fuelled alternatives. Yet, I cannot help but think that Ford is missing a trick.

After all, within its own esteemed engine ranks is a much-vaunted 1.0-litre ‘triple’, a small capacity petrol-turbo unit that has a more natural home in a Fiesta, perhaps in a Focus but also in the Mondeo…although Ford is yet to respond to my much-requested pleas to sample the 1.0-litre model. If anything, for the halo-polishing ‘greenie’, keen to retain personal mobility but desperate to save the planet, surely a Mondeo 1.0-litre Hybrid would be the optimum choice?

For whatever reason (mostly US-related, which is where this saloon-only version of the Mondeo is actually directed and the old argument about there being ‘no substitute for cubic capacity of the infernal combustion engine’ holds significant water), this near-perfect hybrid model does not exist and is unlikely ever to do so. At the turn of the Millennium, I was allowed by Honda UK to run an Insight model for a year. This fascinating, compact, two-seat coupe was powered by a hybrid combination of normally-aspirated, petrol 1.0-litre ‘triple’ and electric engines.

While I shall not delve too deeply into details, despite registering 125mph on the speedometer on several occasions, cruising regularly at speeds in excess of 80mph and digging intensely into the car’s outstanding resources, I returned in excess of 88mpg on one particularly engaging marathon. Having said that, I was a member of the team entered in the annals of the Guinness Book of Records for achieving 92.6mpg from a bog-standard Honda Accord diesel, on a two-days economy drive, after it had been circulated at the north German test facility, at Papenburg, for 24 hours, breaking 19 time and distance Production Car World Records in the process. Frugality is one of the extending keys, just as is hybrid, to partially resolving future fuel crises.

As far as the Mondeo is concerned, it is a landmark product…for Ford. Wearing my imaginary ‘green beret’, I should love it, were Ford’s UK development facility, at Dunton, to remove the 2.0-litre engine and replace it with a 125bhp version of the blown 1.0-litre. It believe that it would work exceptionally well, even though the car’s overall performance might be blunted slightly. Go on, Ford! Give it a go!

Regardless of what politicians and over-anxious scientists, let alone the casual points-seekers, might desire from personal transportation, in light of all of the pressing issues, Ford has put its money where its mouth is. It might not be making much of a fuss about it, more’s the pity, but Ford is now partially aligned with market needs, if not exactly its desires. The Ford Mondeo 2.0-litre Hybrid is an ideal company car for the immediate future, needed today and probably for the next 20 years, until technological advancements move the transport game on a bit. 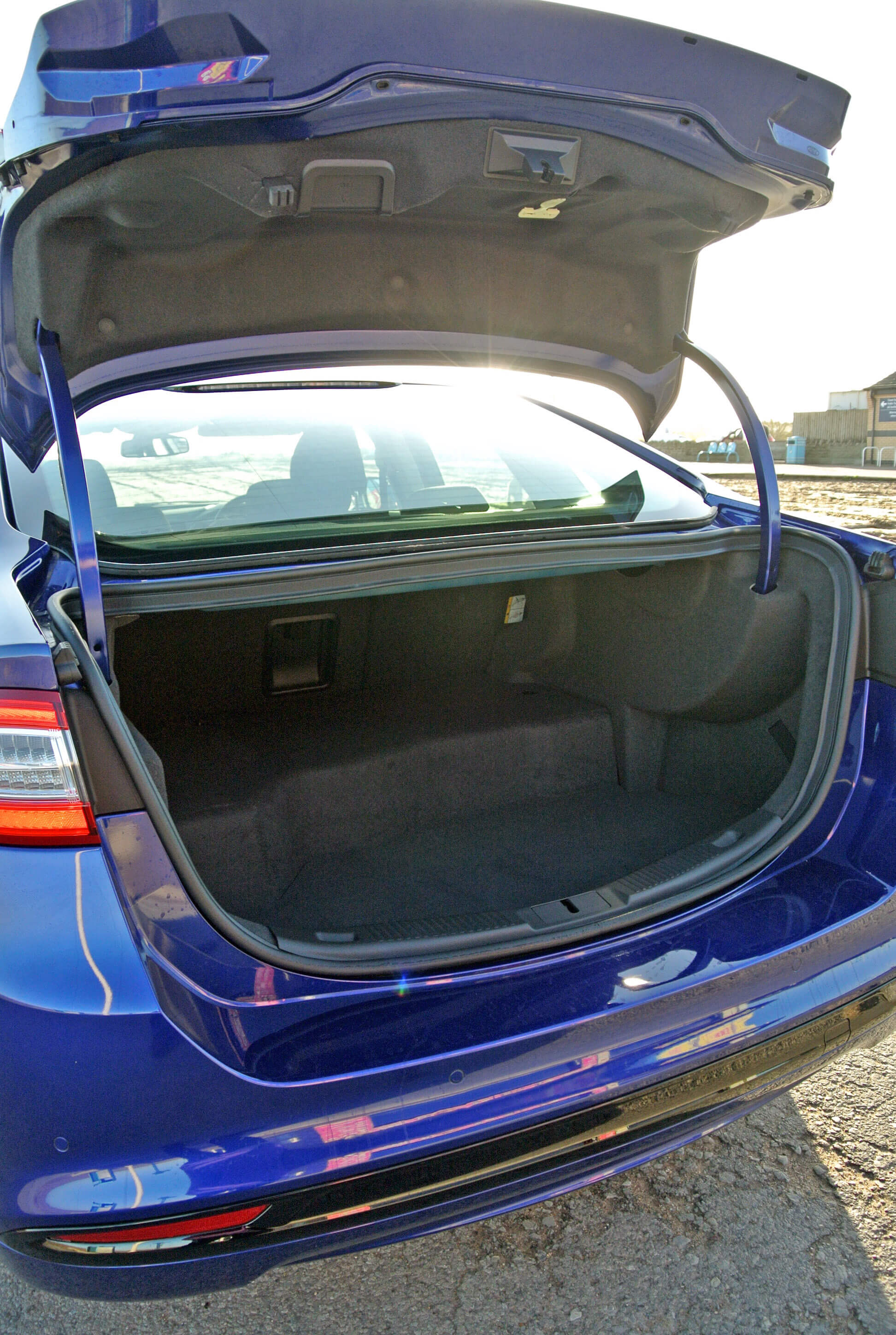 The Ford Mondeo Hybrid is a zero publicity machine for the nation’s most favoured business car-seller, which is a sad state of affairs really. I believe that Ford should make more noise about its almost noiseless Hybrid model. It is refined (unless you push it hard). Its boot is cramped (thanks to the battery pack). However, it has a large (and weighty) heart. Being both pleasant and entertaining to drive are useful by-products of a well-priced family car that possesses an eye to the future. Perhaps Ford should promote that fact?