While harbouring a modicum of antipathy towards the archetypal 4×4 vehicle, Iain Robertson admits that his ire might be aimed more at the typical 4×4 driver instead, as he gains a deeper appreciation of the latest Discovery Sport.

In our topsy-turvy world of terrorist assaults, mindless wars in inhospitable foreign climes, North America’s senseless gun laws and feckless politicians, all arguing with each other and producing no acceptable end solutions, it is my belief that we could do with a respite. In a week that took Lemmy, Bowie and Rickman from us, as if to prove that ‘three-score-and-ten’ remains the biblical life span and that humanity is truly such a tenuous and short-lived expectancy, perhaps a time for reflection is on the cards?

Although I had placed my order to test the latest Land Rover Discovery Sport, my preconceptions were numerous. I wondered how a stoical and almost iconic British brand could devalue itself, even under Indian ownership, by pursuing a Teutonic promotional dream of filling almost every imaginable niche known to automotive marketing. Oh, sure, the ‘Disco’, as much as it was adored, as much of an impact as it made, was one of the least dependable motorcars sold in the UK. It almost embodied all that was tragic about the British motor industry, which did lead to its demise, until foreign firms intervened, and defied all logic, when it came to sales success.

There was no denying its competence. As an on-road machine, equipped with semi-active damping, it could corner like a polecat, defying the laws of physics in the process. In an off-road environment, it was all but unbeatable, giving new definition to traction control and, again, flipping science on its head. Yet, it could cost an arm and a leg to live with, even diesel-fuelled and the warranty claims were horrendous. However, the British car buyer is a strange individual. I have heard of former Land Rover owners, living in total denial, after they swore blind that their ‘Disco would be the last!’, only turning up somewhere not long after, at the controls of the latest version. We do it to ourselves, you know. Just ask any former TVR, Rover, Jaguar, Triumph, Austin, MG, Wolseley, Riley et alia owner. Bilious one moment; blustering the next.

The new Disco Sport was in for a rough ride.

Yet, after a few punts around town, a smattering of cross-country jaunts and spending a bit more time giving it more than the visual once-over, I have reached a conclusion. Were the world’s antagonists presented with a new Discovery Sport (it would help, naturally, if they felt similarly to me), they might soften. They might reach a fresh level of awareness. They might even take my route to Damascus and become enlightened and significantly less-antipathetic. While I cannot endow ‘World Peace’ status on a Disco Sport, by the Good Lord, it might be the ultimate progressive palliative! Stick that in your Middle Eastern pipe and smoke it.

One of my early misconceptions was that this lower-roofed Discovery was little more than a chunkier Evoque…a poncey device much-criticised by me in the past. It is not. There are familial design elements but they are an inevitability of modern car design and it is right to possess a ‘family-look’, for the sake of brand strength, if nothing else. It is a lot larger and more impressive and, unsurprisingly, it feels more substantial at the helm, than the Evoque. While I am sure that yummy-mummies will find it every bit as appealing as any other SUV, at least the latest Disco has not deserted its predominantly male buying base. It is a manly machine.

Naturally, a replacement for the even larger but more traditional Disco in non-Sport guise will be with us imminently but I can see the competitive intent of the D-S in filling a niche that the prissy Evoque has not a hope of fulfilling, no matter how Land Rover’s design team might stretch its bounds of credibility. Awarded recently the Large SUV of the Year trophy by What Car? Magazine, its rivals are clear and they include the BMW X3 and Hyundai Santa Fe, albeit, with a cheerier, workaday pleasantness to it, which is the point with which I have become most impressed. 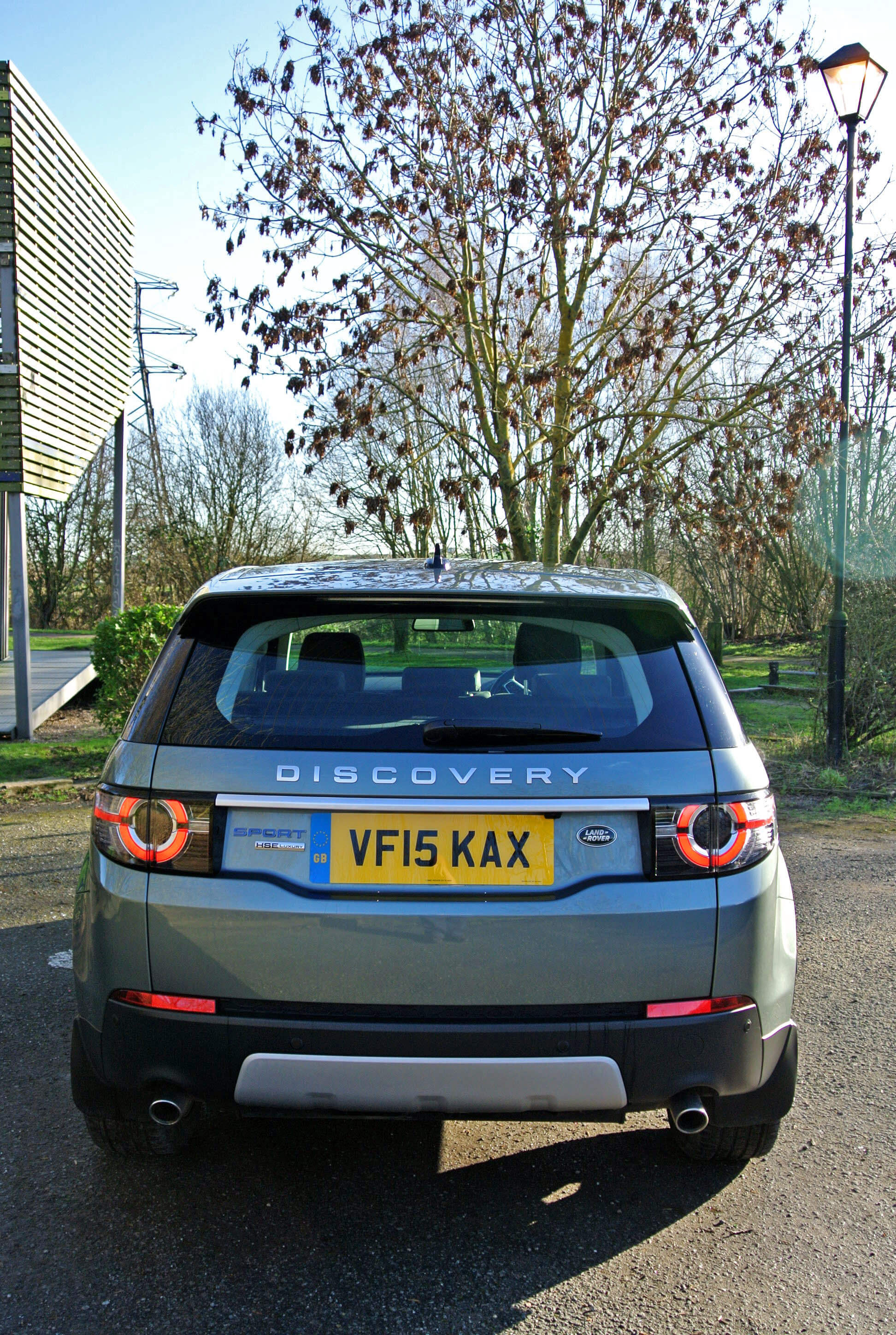 Most SUV/4x4s have become little more than high-riding, estate-car sisters to what used to be termed ‘mainstream family cars’ not so long ago. Plied with copious sound-deadening materials, finest hide trim, electric power steering and auto-trannies, their appeal to the nancy-boy, hairdressing set has not been lost on me. Yet, over the course of a few days, the more purposeful nature of the Disco Sport has penetrated my psyche. While it no longer has a centre console sprouting with high-low differential and axle locking levers – which were clearly confusing, even to the most wilful of off-roading exponents – that duty now being consigned to electronic actuation (via a rocker switch and an in-dash read-out that determines quite skilfully the drive setting that you WILL require) – a chunky but precise 6-speed manual gearshift (on my test car) is about as conventionally predictable as it gets. 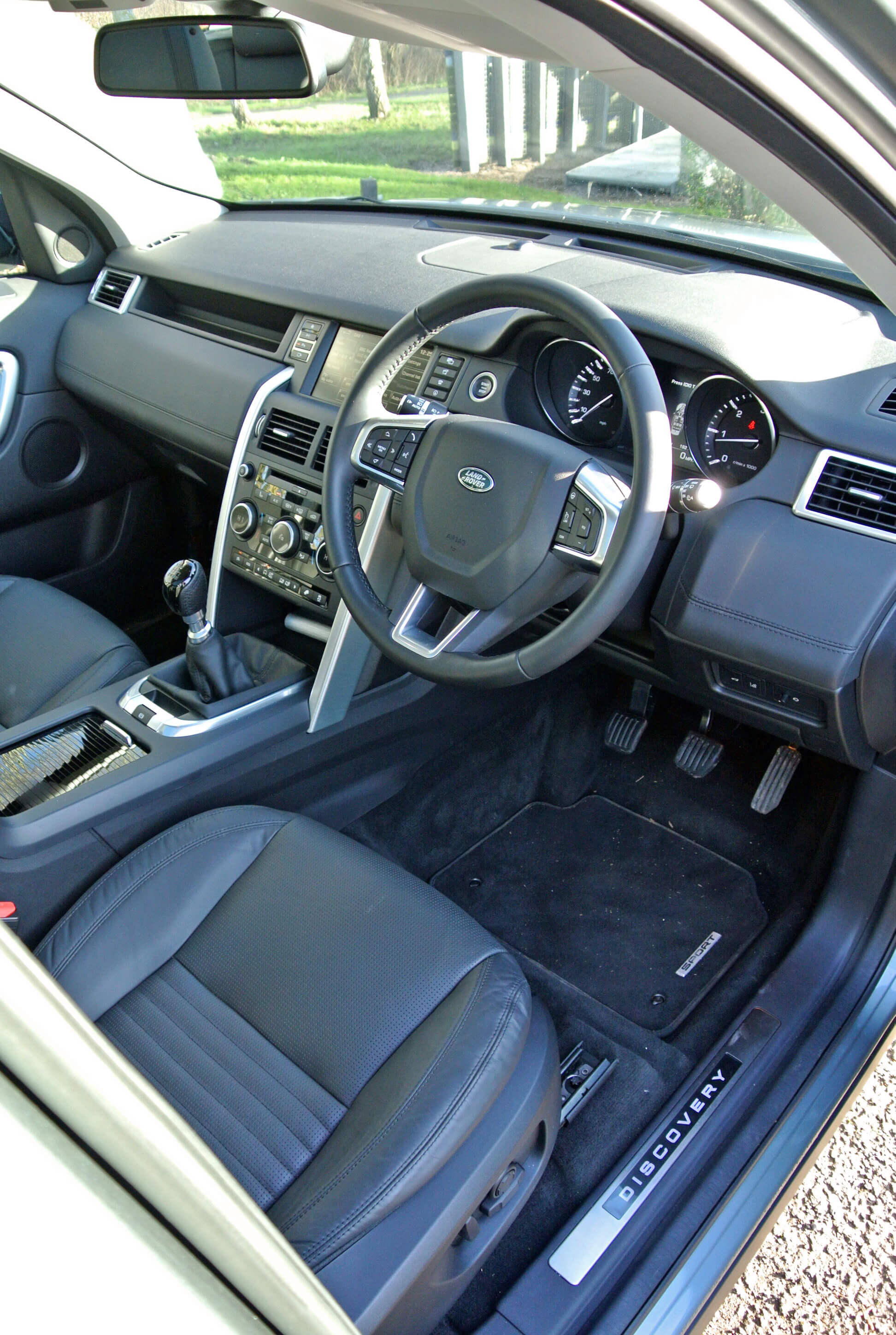 Being specific, the test car also features an electronic parking brake…that works…the good quality carpets, leather surfaces and high-end plastic mouldings of a top-specification family car. I suppose that it has to, to meet the consumer demand, of which we have been informed so comprehensively by various car companies over the past 10-15 years of the SUV‘s development cycle. While, the interior and exterior, for that matter, looks pleasantly middle-class suburban, it is the magic beneath the fancy rugs and paint finish that still delivers, in customary Land Rover style. A 25-degrees approach, 31-degrees departure and 21-degrees ramp break-over angles give away some of the car’s more serious aspects and, rest assured, there are very few rivals to Land Rover’s prowess in the ‘boondocks’.

However, to complete the interior accoutrements, which include a good size boot, are a heated steering wheel (and front seats), convenient ‘auto-on’ lamps and wipers, drinks-holders, electric seats and a powered, full-length sun-blind for the full-length glazed roof (which does not open) and even a TV setting on the in-dash touch-screen (which costs a whopping £2,500 extra by the way). It needs to be remembered that this Discovery Sport is in HSE trim. Of course, it also features road-sign recognition, semi-autonomous emergency braking, colour-adjustable ambient cabin lighting, illuminated tread-strips and even a perpendicular self-parking system, for drivers hard of hearing and possessing questionable sight too. Factor in the various goodies and the list price takes a singularly unhealthy upwards hike from £35,395 to £45,035. Mind you, the blessed consumer, which seems to have a governing factor over personalisation matters, appears to like the thrill of ‘speccing-up’ at ordering time. 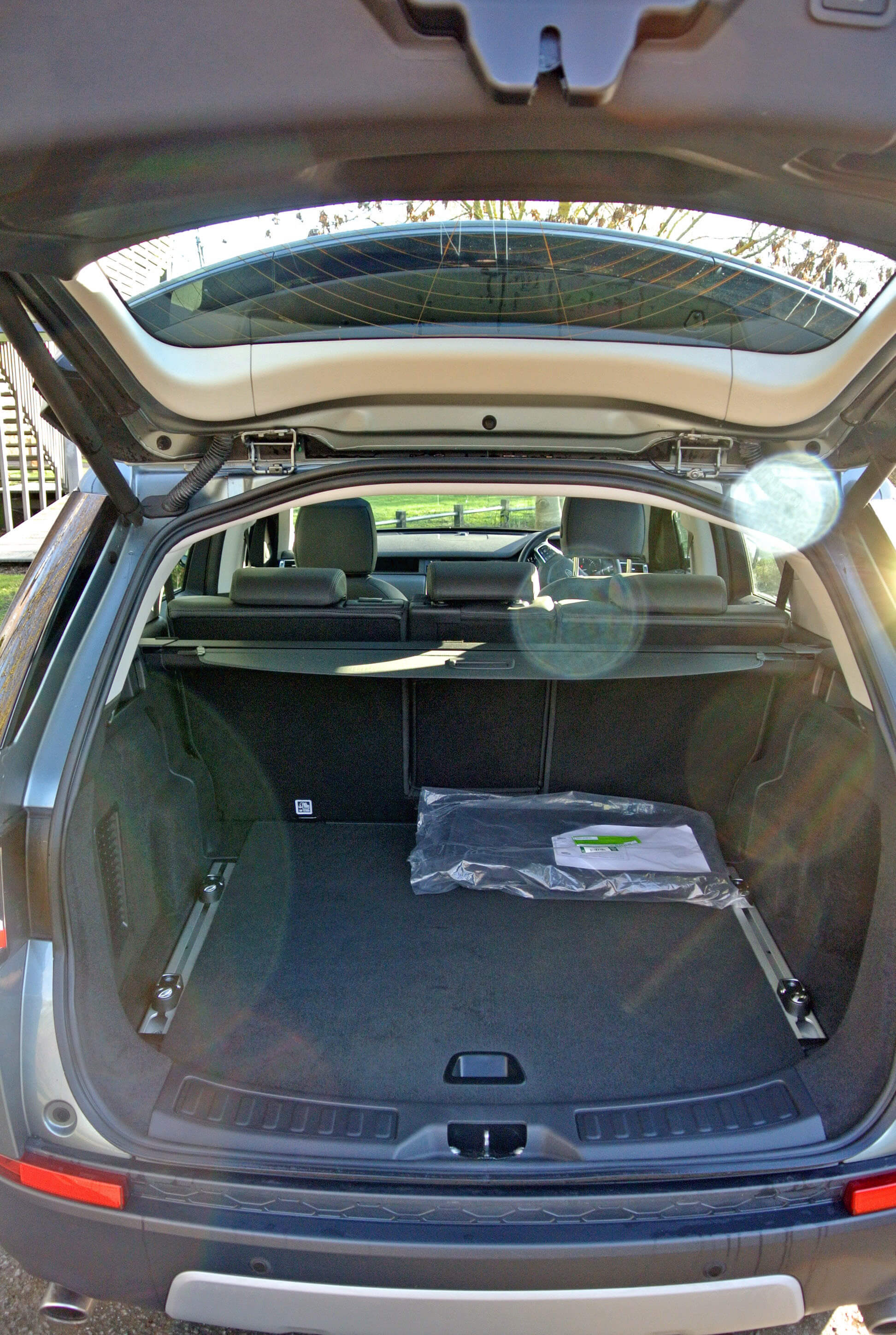 It is the 20-inch alloys that afford the Disco the ‘style-centric’ exterior appearance of its little brother, although the subtle mossy-grey paintwork (actually known as ‘Scotia Grey’ could become as popular a finish as bottle green ever did for the original Landy. Of course, the headlights and tail lamp units display their LED DRL signatures in (now) time-honoured fashion but, while I might baulk at barrelling a £150k Range Rover Autobiography along my favourite green lane, there is an outward sense of practicality that emerges from the Disco Sport and, as I discovered appropriately, the car will dispense with tricky surfaces as readily as it can pristine tarmac.

Its driveability is superb. It exhibits a satisfying directional stability that scoffs at several of its rivals, with precise corner turn-in allied to strong grip and a nonchalant resistance to body-roll. Although the ride quality can be upset slightly on rippled and pockmarked surfaces, more aurally than by the seat of one’s pants, the Discovery Sport is not shoved off the chosen line and the car’s suspension system absorbs the worst of bumps manfully. I have to admit that I like the overall feel and the quality of the feedback.

Jaguar-Land-Rover’s latest, 2.0-litre Ingenium turbo-diesel engine, in 147bhp form, powers the test car. It is smooth and emits a not unpleasant grumble, notably under load. Yet, while the torque output is a moderate 280lbs ft produced at a lowly 1,750rpm and tackling fairly steep hills in high gears is well within its capabilities, its 1.775-tonnes ensures that its pace is leisurely rather than ‘sporty’. Were it mine, I would opt for the punchier engine and dispense with some of the costly accessories. The stated performance figures hint at a 0-60mph time of 11.0 seconds, which feels closer to 14.0 seconds, and its top speed is an acceptable 112mph. It is not bad on the frugality front, although I returned a realistic 38.5mpg, against a posted 57.7mpg on the EU Combined test cycle, which will be disappointing to some owners. Its emissions figure of 129g/km (Band D) equates to a zero-cost VED in the first year and £110 annually thereafter.

The latest Land Rover Discovery Sport is a game-changer on several levels. It is characterful in appearance and smart enough to serve purpose at the golf club, while being unconcerned about charging across ploughed fields (after you have gained permission, naturally). It drives really well, even though its performance is blunted in base engine, if tax-friendly form. However, it displays an overall honesty that I did not anticipate and, while I am not a fan of advertising-led automotive awards, I can understand why many critics hold the Discovery Sport in high esteem.