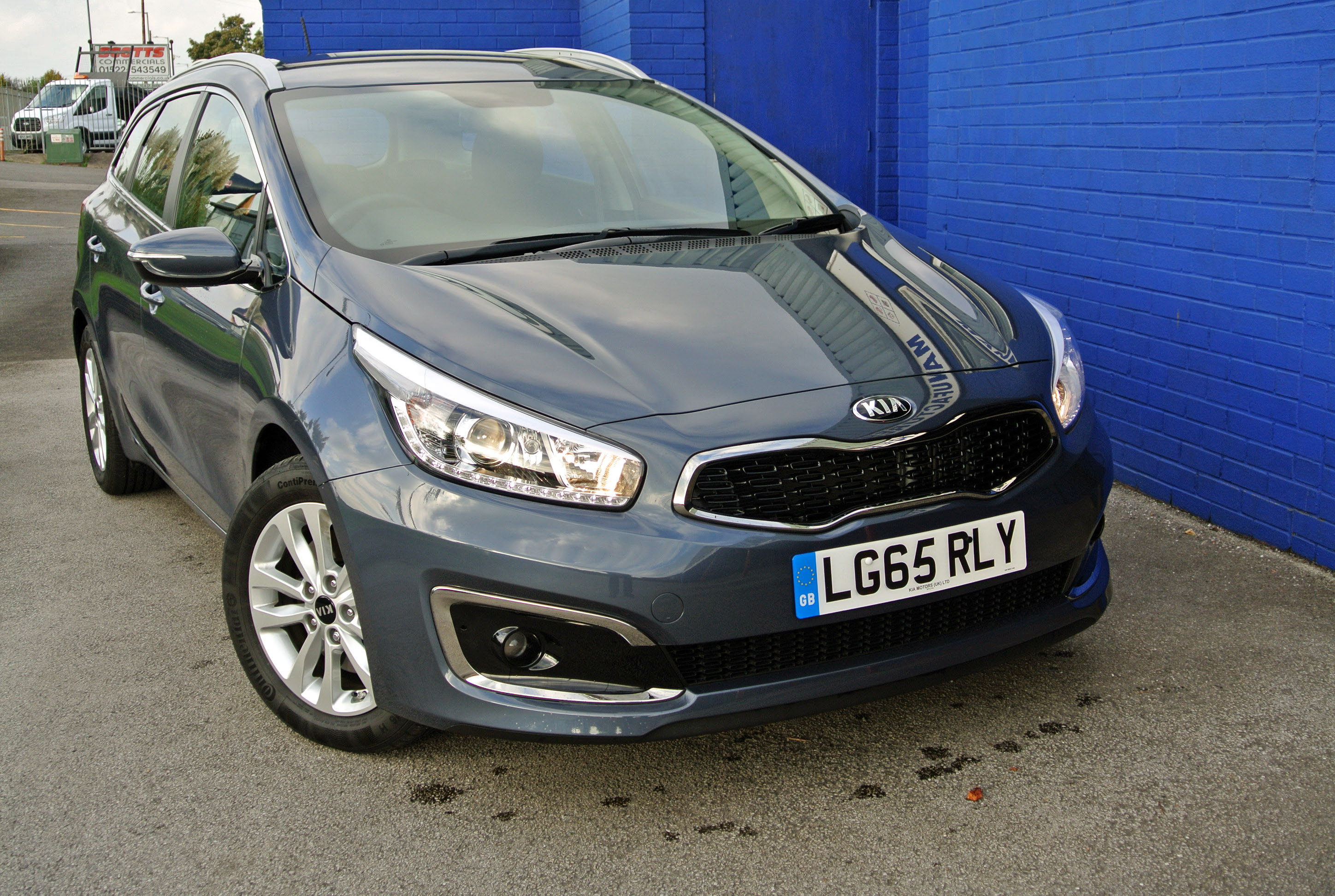 In attempting to discover the marketing magic of South Korean carmaker, Kia, Iain Robertson avoids the bells and whistles approach of some of its models, to concentrate on a more mainstream estate car that turns up a fascinating insight.

We all seek comfort zones. It is a natural course of action. They can be demonstrated by numerous means and have innumerable positive results. A child has a tumble off a bicycle and turns to its mother for a comforting hug and reassurance that life does go on, after grazes heal. At work, you seek little moments of joy, sometimes to alleviate potential boredom, often to make the day speed past, but invariably as a means to bond with colleagues.

The very act of making people feel comfortable and at ease with their situations is not just a kindly gesture but is also a method of engagement. Whether buying a new couch, an overcoat, a pair of shoes, or a new car, the psychology of comfort provision is an essential component, even though a commercial reality may be the primary intention. 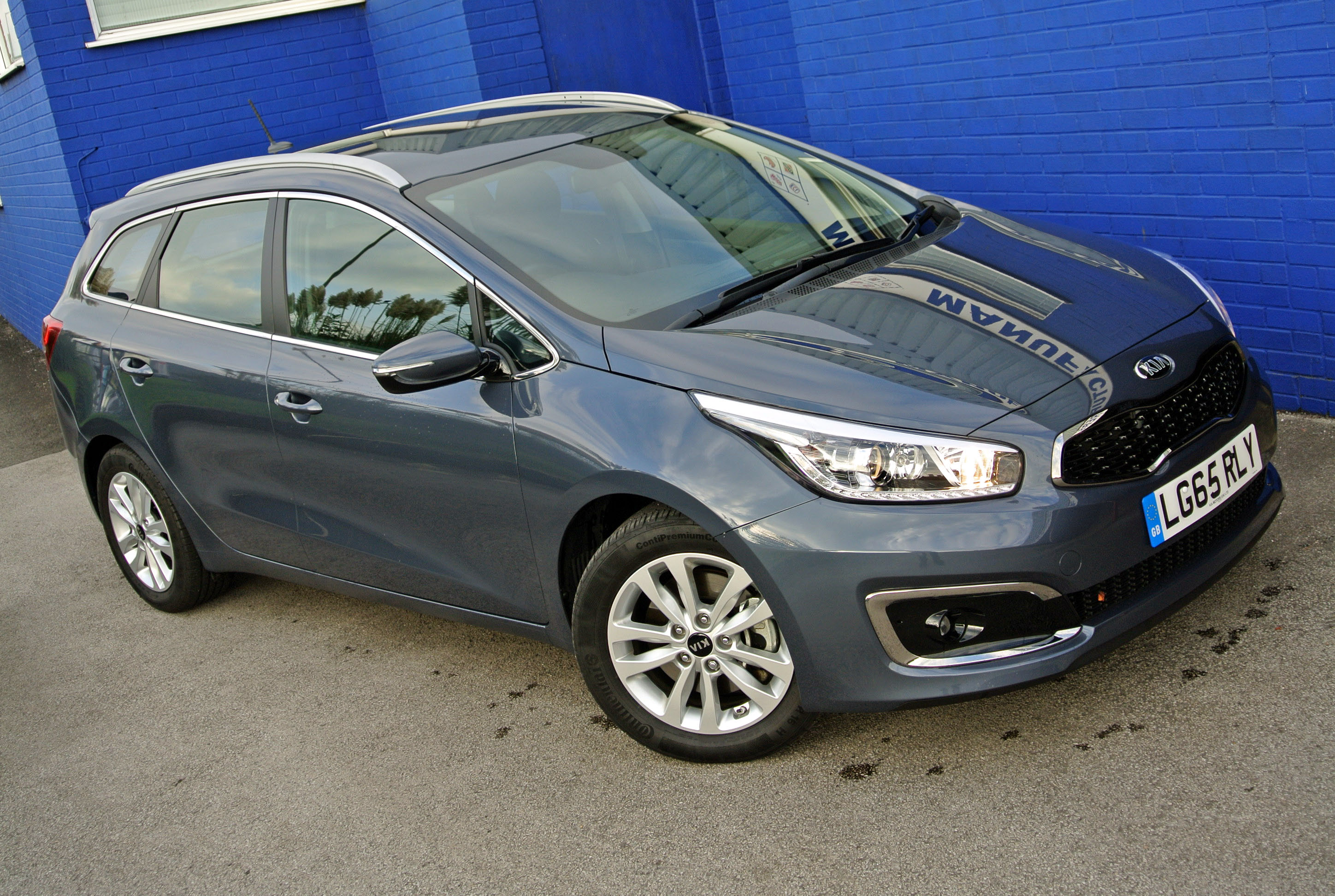 Kia Cars has made a most satisfying meal of its comfort proposition. In a popular model, like the cee’d, to be able to achieve mass-market appeal is no less than a master-stroke. Credit for this lies squarely at the door of the firm’s intuitive design team, led by seminal design boss, Peter Schreyer. While it is assuredly a team effort, it is his clear signature that is posited above the door, like Mick and Linda Carter, at The Queen Victoria pub, in fictional Walford E20!

However, there is no Eastender’s fiction in western designed Kia, despite both being able to reach deeply into popular consciousness. South Korean Kia knew what it was doing when it engaged the German stylist’s services. It wanted a semi-Teutonic prepossession, based on the world demand for Germanic products. It has received it in spades.

On first acquaintance with a cee’d, in this case, a practical estate car variant, the observer is struck by the eye-pleasing proportions. The car hugs the road and possesses a surprisingly sporting attraction for a product that is actually quite rudimentary. Although there are flashes of chromium plate (albeit on a plastic, rather than metal base), the styling is determinedly subtle and avoids being over-wrought.

The grey paint of the test car is a primary example of how even a potentially ‘dull’ finish can be lifted somewhat above the ordinary by design nuances that breed warmth and friendliness. Even the radiator grille presents a slightly pinched smile, with the headlamp units aiding the impression of accommodating width, while supporting that welcoming grin and ensuring that the car presents no threat whatsoever. 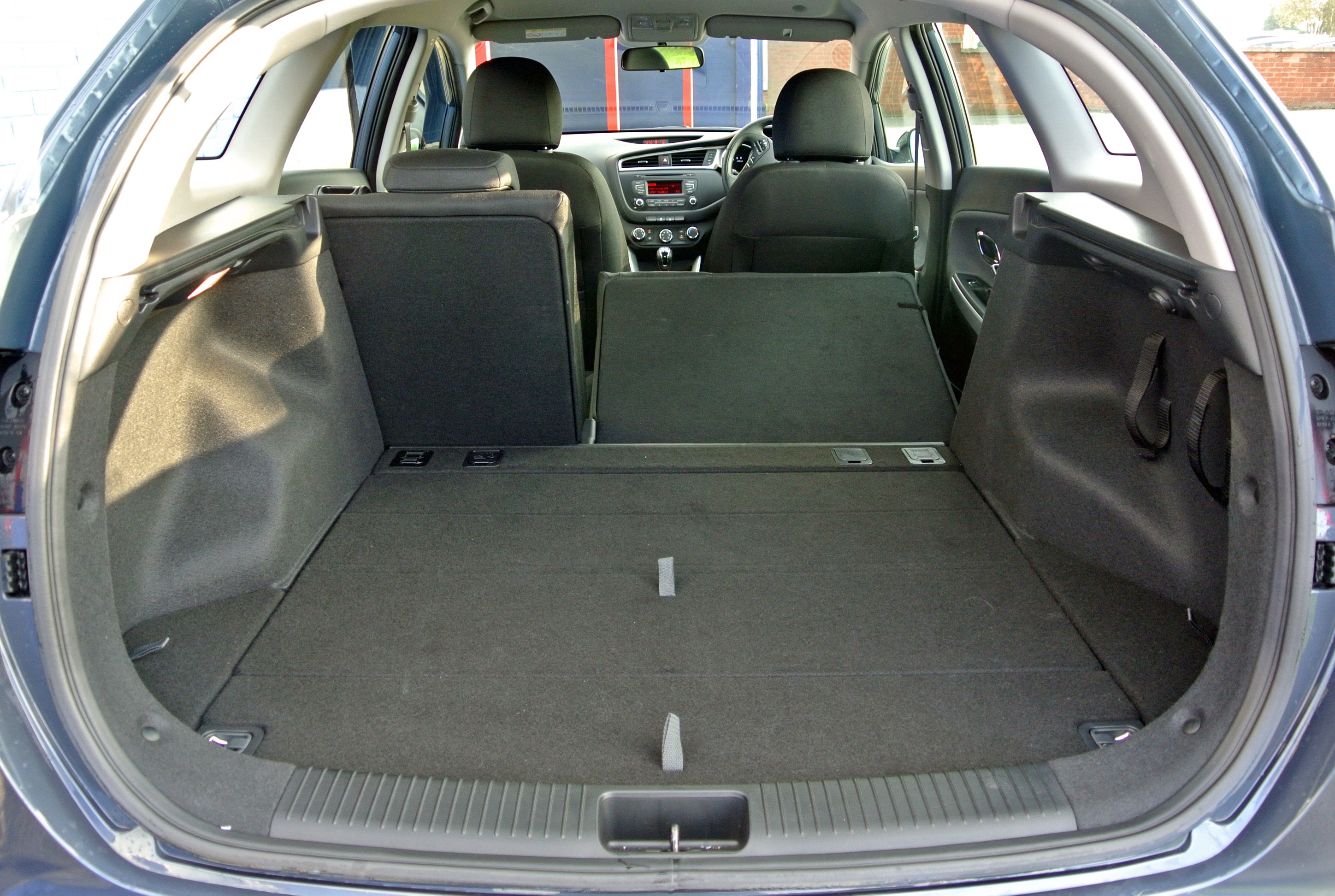 Naturally, crack open the hatchback rear door, which reveals a spacious load platform and more warmth emerges, once the false floor flaps are lifted. While many carmakers reserve that space for a spare wheel (when fitted) and little else more, Kia offers a series of ‘secret’ storage spaces, into which personal items can be stowed and shut off from unwelcome prying eyes. Each of them feels like a trinket box perched upon a dressing table, into which one might deposit an expensive watch, a set of cufflinks, or a tiepin, again breeding that sense of agreeable domesticity, a link to something comforting in one’s life. 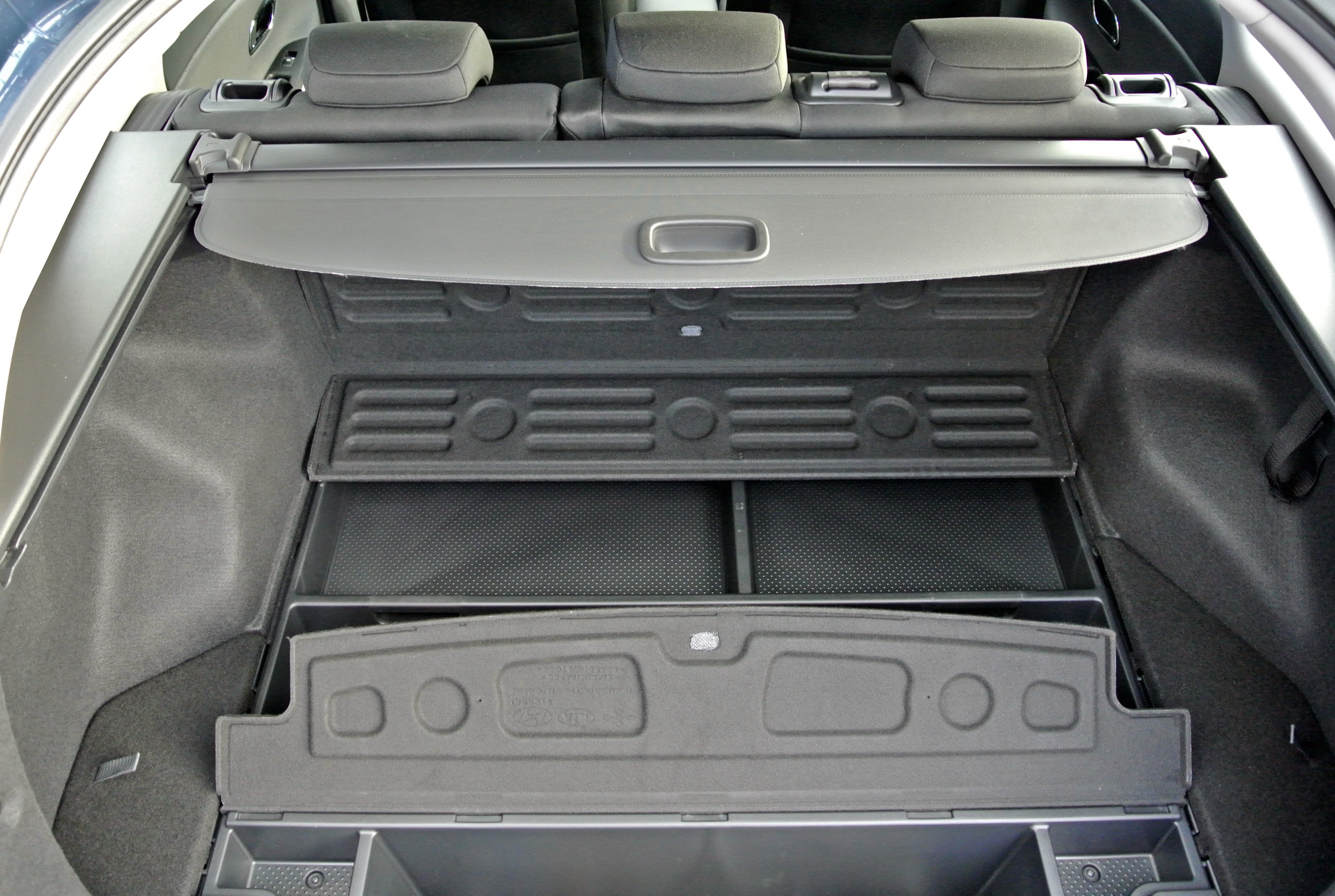 Yet, there is an air of convenience and a sense of ease contained within that aperture. For a start, there are no unfortunate lumps to overcome, when loading up the 528-litres boot, as the floor is flush with the rear bumper and a good quality carpet material allows items to be pushed into the cavity but held lightly and quietly in place. A retractable load cover slips back imperceptibly and can be removed for bulkier items. There are even load bay hooks within the boot, from which securing nets (an optional extra) can retain oddly shaped items. There is also a back seat useful 12v power socket. 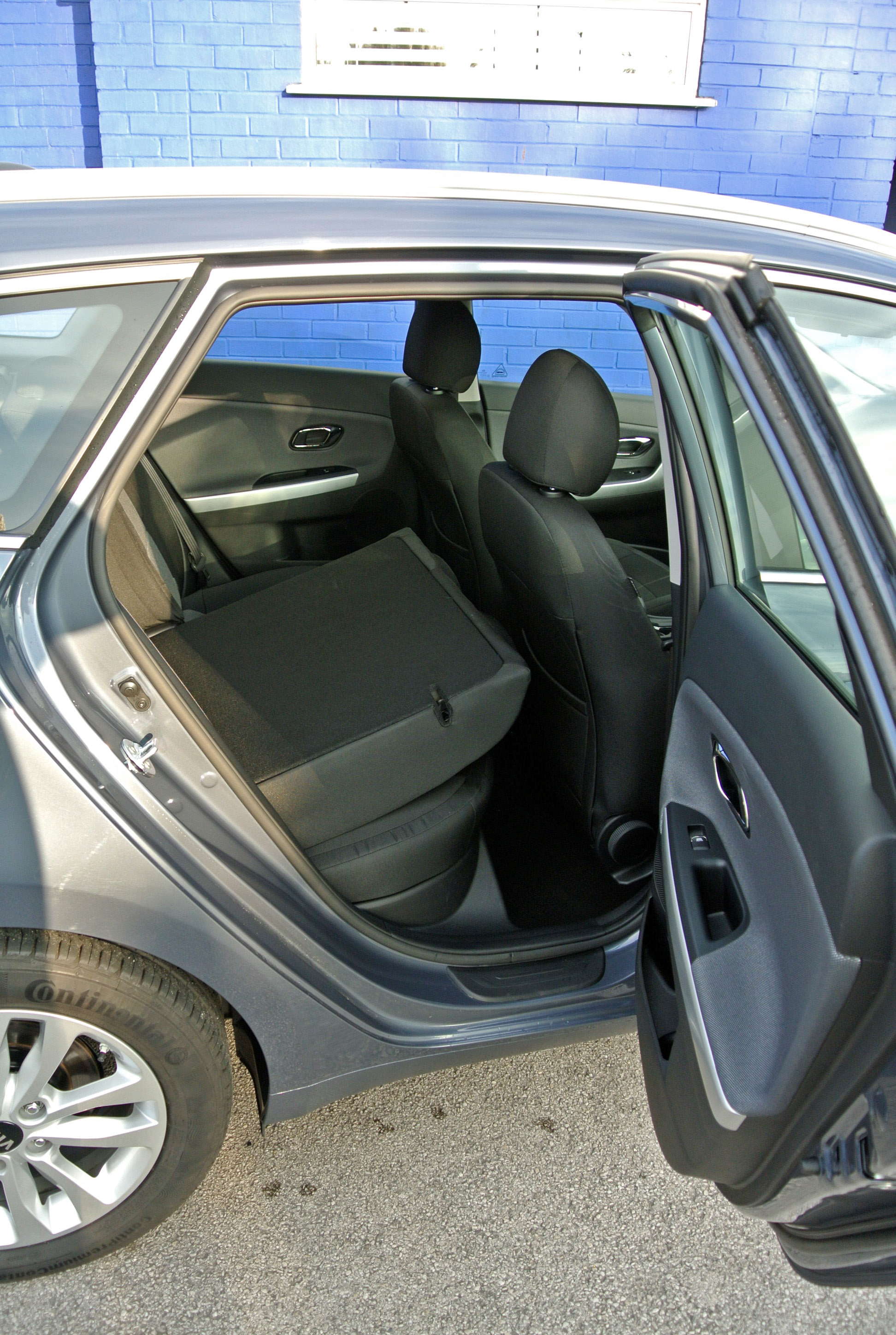 The 60:40 split of the back seats allows longer items to be accommodated (a maximum of 1,660-litres, with both rear seats folded), while still providing seating space for two people. In addition, load area illumination ensures that owners are not forced to fumble in the dark, when emptying the boot. All of these aspects are governed by the laws of haptics, which is the science of how things move and the feelings they impart to users. They also relate to ergonomics, which deals with the placement of controls and the ease with which the end-user relates with them, which leads us neatly into the car’s cabin.

Confronted with banks of switchgear, some of which is on the steering wheel, then on the usual stalks and more in the centre console, it is surprising how quickly the driver, even on first acquaintance, can feel comfortable with his surroundings. Of course, the driver’s seat moves in every which direction, the recline function being carried out by an accessible handwheel-type of adjuster that is conveniently located and does not break fingernails, or gouge skin. The steering column also features rake, as well as reach adjustment and the total range of movement is sizeable, which creates a flexible and spacious comfort zone for virtually any stature of front seat occupant. 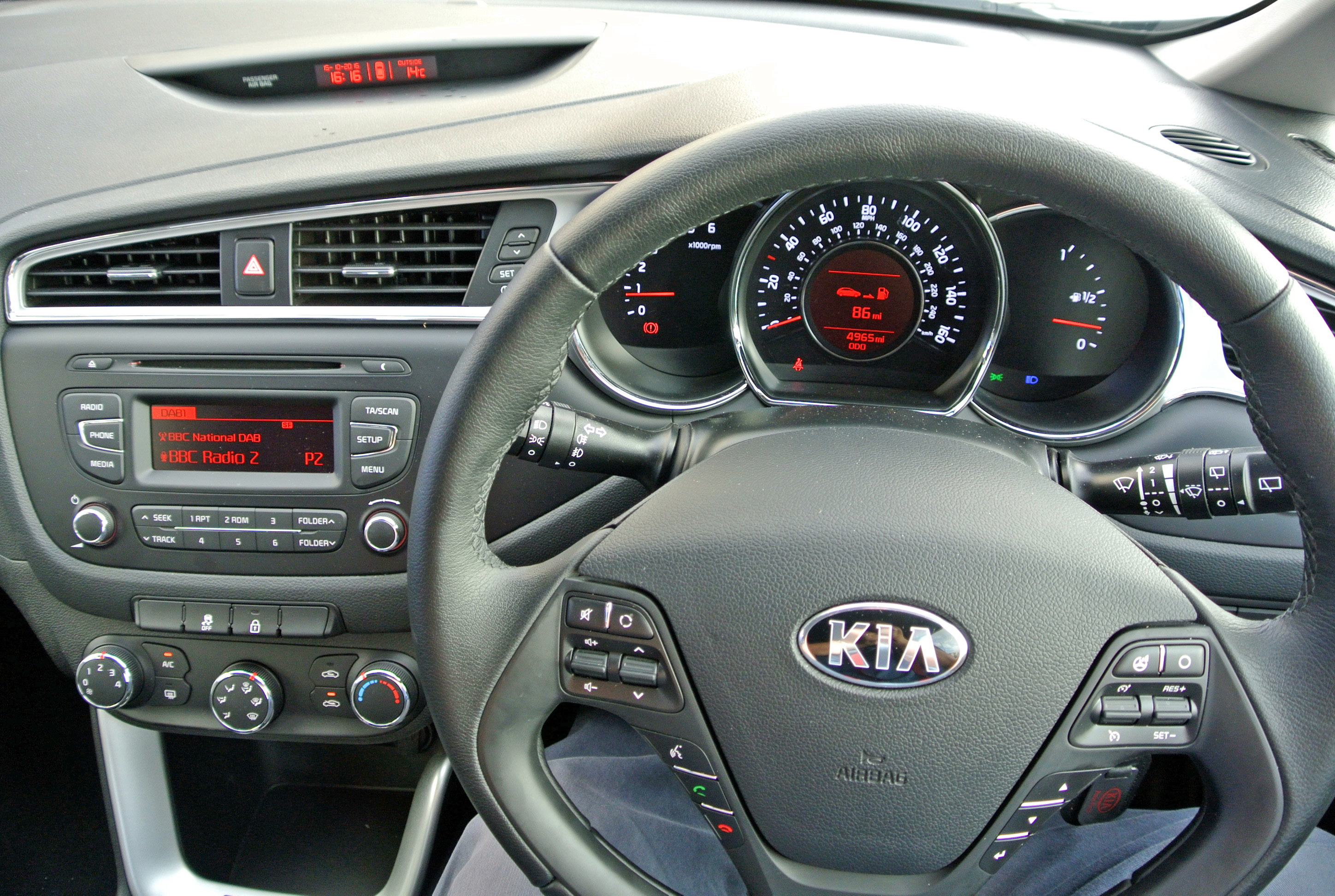 The stalk controls possess a high quality solidity, allied to fluidity of operation. This is a very important area, because cheap and nasty stalk controls impart a low-end feel to the cockpit. Naturally, they contain the lighting and wash-wiper functions within their twisting barrels. There is a CD slot, which is a blessing, as not all end users have access to downloaded music, although the specification of this model does not have sat-nav as standard. Yet, the radio controls that sit above the heating and ventilation in the centre stack, are all uncomplicated and easy to use, without diverting the driver’s attention from the task of conducting the car along the Queen’s highways. Even the steering wheel-located mini-switches are easy and logical to follow.

As I have already suggested the seating position is excellent and the upholstery (fabric in this ‘2’ trimmed model) is not just comfortable but provides good support down the spine, with enough lateral support in the frame to resist sideways body movement during cornering. I was keen to sample a lesser version of the cee’d, because it is easy to become enamoured with the all the flash of the more up-market models. Yet, despite a market competitive price tag of £20,030, the one-up-from-base Kia cee’d Sportswagon really lacks nothing other than a few convenience fripperies that most potential users have access to in any case.

The 1.6-litre turbo-diesel engine is a delight to operate, being both flexible in performance terms (134bhp, 99g/km CO2; 0-60mph in 10.1 seconds; top speed of 121mph) and remaining satisfyingly frugal (72.4mpg Official Combined; around 56mpg actual). However, there is enough meat in the pie (206lbs ft) to give this model a towing maximum of 1,500kgs. 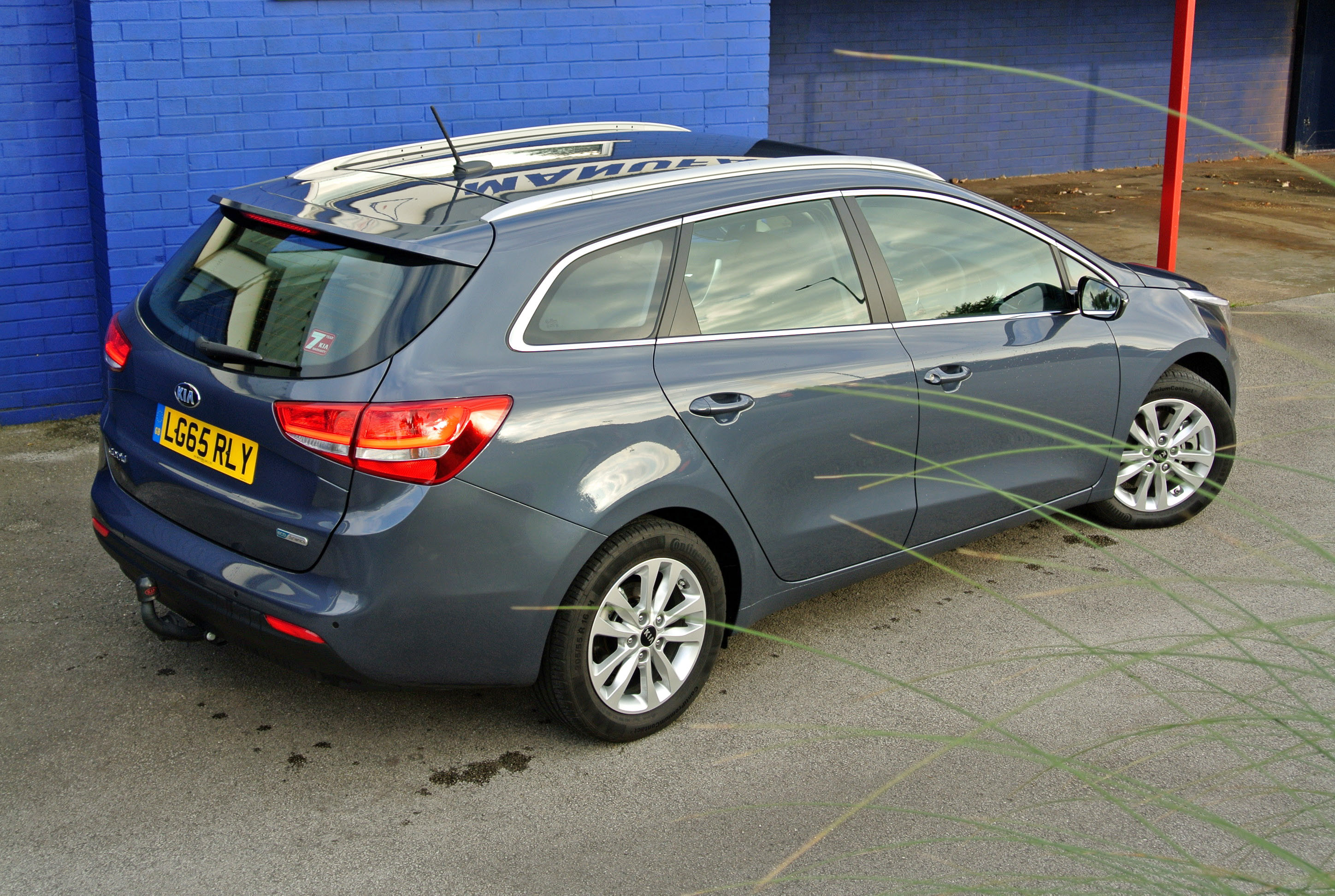 However, the comfort angle extends to the on-road experience too. Featuring a slightly longer than class average wheelbase (the distance between front and rear axle lines) of 2,650mm endows the cee’d with a ride quality that is sublime, while the 205/55 section tyres on 16-inch alloy wheels afford it a level of stability and grip that is excellent. As a result, the car soaks up bumps seamlessly on main roads, while remaining eminently chuckable on the back doubles. The electric power steering is nicely weighted to impart a high quality feel, while a decent steering lock ensures that parking remains a doddle.

Kia is ingenious enough to recognise that it is still a relative youngster in a mature and highly competitive market. The look good, feel good factors are high on either count and the overall impression is of readily serviceable joy, supported by a seven years’ warranty programme that underscores the manufacturer’s confidence in its products. Appropriate for either business, or social needs, no Kia owner is ever going to feel short-changed by his/her choice of motorcar.