To have observed the ‘Ugly Duckling’ transformation undertaken by South Korean car manufacturer, Kia, is to have been part of a phenomenon that Iain Robertson suggests is unlikely to occur again in his lifetime.

While it might sound like a grandiose statement, I believe so vehemently in what you are about to read that I am prepared to lay a wager that no other carmaker can, or will, perform similarly in the near future. For almost 30 years, I have watched closely the development of Kia, from being a Ford/Mazda dependent, through its troubled ‘Bowl of Rice’ economic collapse, to its more recent alliance with Hyundai.

Needless to say, I have also witnessed its financial offering from budget conscious, through highly competitive, to the current, sometimes awkward to justify status of ‘market priced’. My range of complaints has diminished from vociferous, to struggling to find any sores to pick at. The last car firm to even dare to escalate the demanding peaks of European automotive expectancy was Skoda, the Czech firm saved by VW Group, allowed to formulate its own character but now subsumed so totally in the parent’s ethos that scarcely a whiff of Bohemia remains.

With the latest Sportage model, Kia’s on-the-money, market-led (marketing-supported), sporty SUV is not merely an organic development of the previous generation model, even though the design cues are abundant, but it is that final step into the ‘Big Boys’ Club’. Kia has made it. No longer just the running-mate to Hyundai, no longer a budding rival to the better end of the pan-European class offerings, no longer playing ‘catch-up’, the latest Kia Sportage IS, without any doubt in my mind, the finest medium sector sporting crossover/estate car on sale today.

It joins a very small raft of the most dramatically improved motorcars that includes the first-rate new Vauxhall Astra. As a result, you will not read any further plaintive platitudes from me (not that I veer towards them, even infrequently). It is highly unlikely that you will read the expression ‘coming car company’ from me, unless something truly tragic alters the consistent upwards trajectory of the Kia brand. Instead, karma presents itself. Kia, finally, is here and I raise a hearty ‘Hear, hear!’ for its escalation to the senior ranks of future world car excellence.

Designed by Peter Schreyer, the company’s German styling chief, at its Frankfurt studios, but built at the company’s Gwangju Plant in South Korea, the new Sportage is the SUV for everyman. The range is price-tagged from an affordable base of £17,995 (£200 less than the previous generation, entry-level example), to a costly £31,645 (£2,135 more than the former top-spec, KX-4 version), although that higher level is for what is known as the seriously high-specification ‘First Edition’, to which nothing can, or needs to be, factored-in as an enhancement.

However, I am not going to dwell on list prices, in this instance, mainly because so few customers will ever actually part with their own money in exchange for a new Sportage. The vast majority will find homes in the corporate car park but I will not denigrate Kia for that, as the corporate offering is so brilliant that Kia will have no difficulties in clearing its UK allocations. Let me put that into perspective: the new Sportage is several times the car that the Range Rover Evoque thinks itself to be.

Naturally, Kia now needs to exercise caution. After all, positing a product in the busiest sector of the crossover market segment, especially by mounting it inadvertently atop a very tall pinnacle, does make it a fantastic target at which the rivals can tilt. For the meantime, I reckon that Kia is fairly safe but you can guarantee that they are all going to have a go.

While the car’s exterior is an evolution of the previous model, carrying over its cute windscreen cut-out, albeit at a somewhat steeper angle, with its more pugnacious snout and less rakish-on-stilts appearance, it remains smart, if hardly ground-breaking. Fortunately, as every other carmaker seems to be hell-bent on producing a Qashqai/Kuga lookalike, the Kia is not just conservatively styled but gives off a whiff of classless and uniquely appealing advancement, which is very much in its favour. 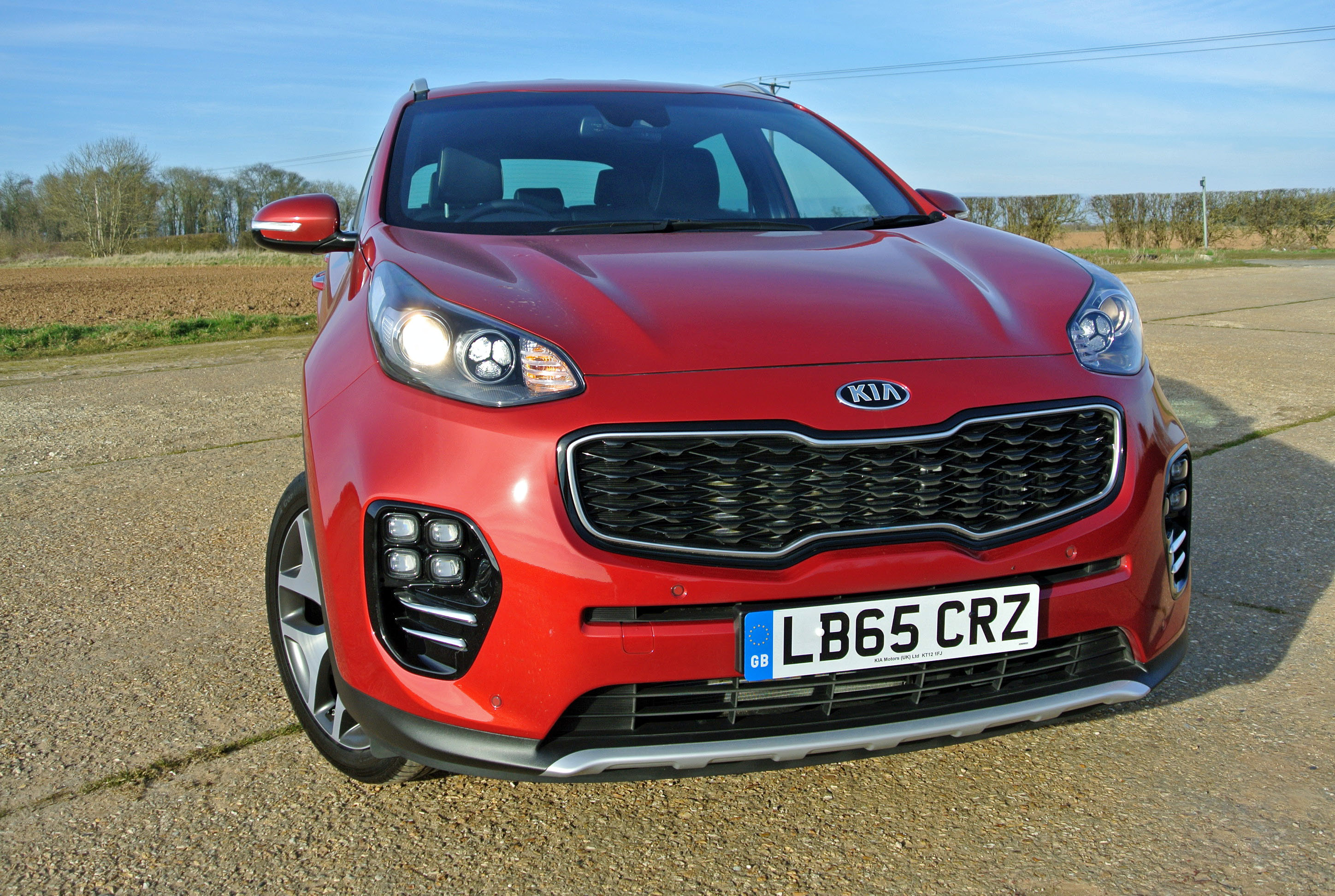 You might notice that this is the ‘GT-Line’ variant, from its pair of quadded ice-cube lamps in the lower front bumper, which it shares with the hatchback Cee’d model. However, do not be misled. This is not a ‘GTi’. In fact, I would venture to propose that Kia has just struck a Grand Touring seam of gold, like no other brand. My reasoning is simple.

The archetypal Grand Tourer was the sort of vehicle that an Edwardian gentleman might use to transport him from the slopes at Chamonix, to the Czar’s former residence in St Petersburg. It was and is the kind of car that is capable of despatching immense mileages in effortless comfort, with more than an adequate supply of toys to while away the trek, regardless of the road surfaces, the weather adversity, or other external influences. The new Kia Sportage epitomises the Grand Touring specification of old and it is none the worse for reflecting on past glories.

Whether that is Kia’s intention matters not a jot to me. It is how I perceive the car and its understated excellence that makes it the genuine class winner it is. The view outwards is mildly imperious but the inner detailing is no less than marvellous. Every element of the Sportage’s design oozes quality of the first order. From the faux-stitched (but realistic looking) soft-touch dashboard, to the thoughtfully rubber-matted trinket spaces, and the stylish gauges and myriad easy-to-read and highly tactile switches. The driver will want for nothing in this example of the car. 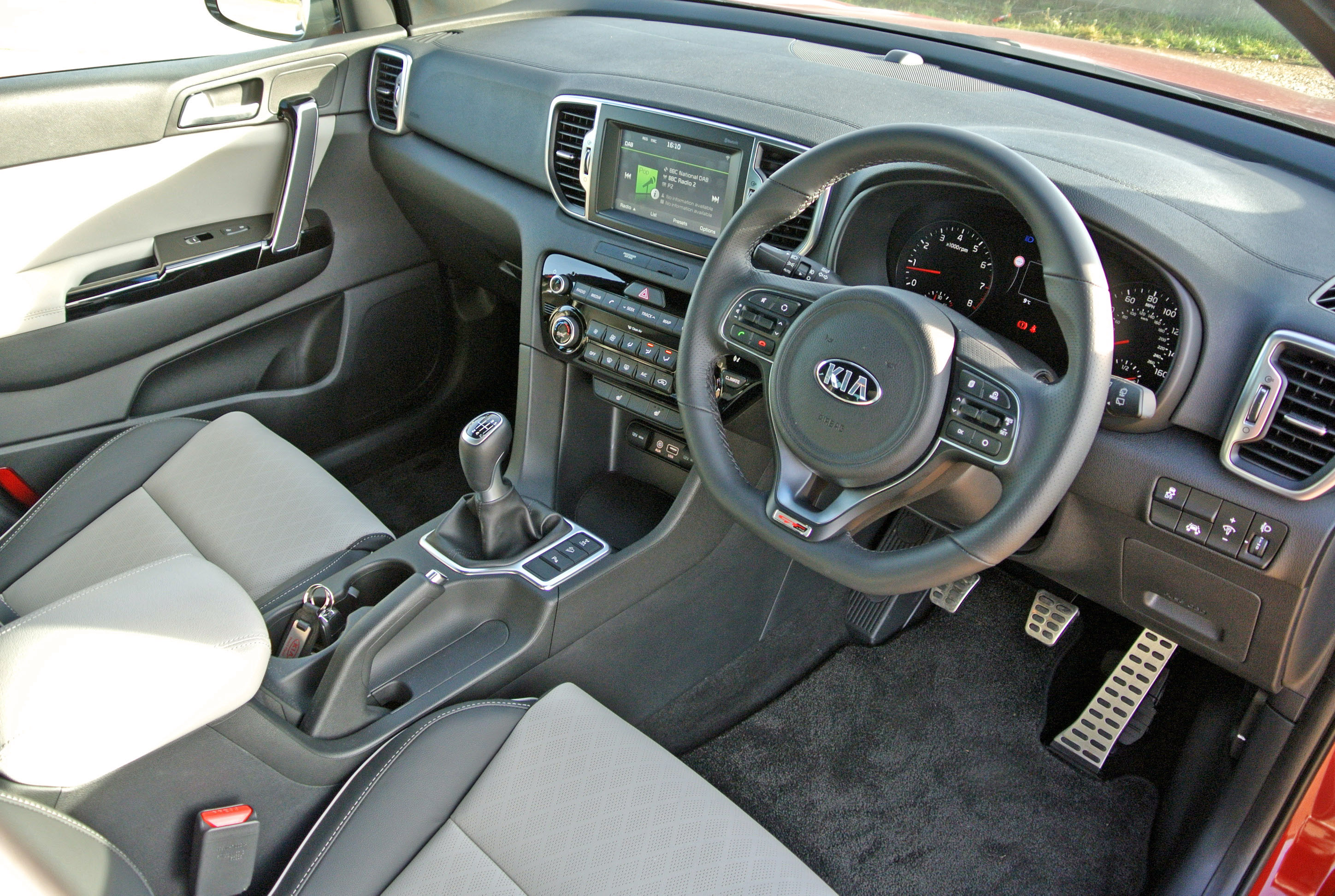 The amount of space within the thoughtfully designed cabin is, well, substantial. That the driver’s seat accommodates all two-metres of me, yet still allows another six-footer to sit behind me, is outstanding. In this model, the two-tone grey and black hide is attractive and relieves some of the all-pervading blackness of the rest of the trim. The driver’s chair adjusts every-which-way and is usefully heated too, as is the front passenger perch. From front to rear, the carpet is of high quality and also trims a moderately spacious boot, beneath which is a full-size but space-robbing spare wheel. The back seats split-fold, single-handedly, to provide estate car stowage (1,480-litres), should you need it. If you need more, the roof rails will take optional fitted bars. 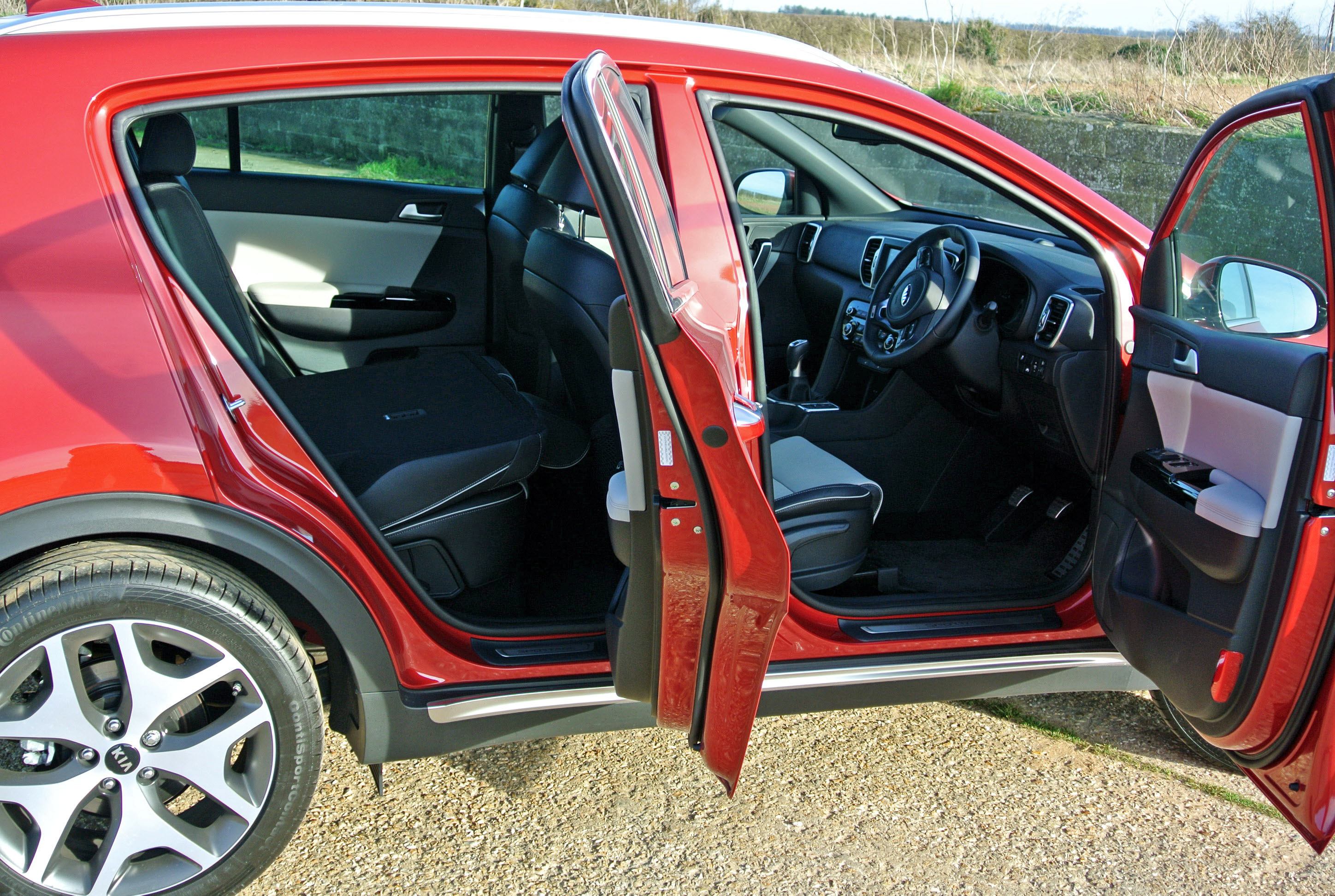 Cabin refinement is excellent but, then, it would be, with a 1.6-litre petrol engine providing the verve. It is turbocharged but behaves like no turbo-petrol unit that I have piloted lately, as one can short-shift up the delicious six-speed manual ’box, the engine pulling without complaint from as low as 800rpm, albeit with significance from 1,100rpm, all the way to the 6,500rpm red-line. Sadly, being forced to pull almost 1.6-tonnes (kerb weight) strikes hard at the back pocket.

Its Official Combined fuel return is given as a modest 37.2mpg (opt for the 7-speed twin-clutch automated transmission and you will only fare better by 0.5mpg), which is mildly disappointing. Try as I might, over the course of a week’s worth of stop-start (no; ‘stop-start’ technology is not fitted to this model) motoring, I could only return a best of 32.8mpg, a figure that I do not consider to be acceptable, which suggests that Kia’s Achilles Heel still lies in its petrol engineering. This also suggests that all is not well in this otherwise perfect machine.

However, the unit is of smaller-than-expected capacity and, despite its 1.6-litres, it develops a strident 174bhp, which means a 0-60mph benchmark acceleration time of just 9.2 seconds and a top speed of 126mph. Sadly, the 177g/km CO2 rating means a hefty chunk of VED taxation (£335 in year one; £220 annually thereafter). Incidentally, it is rated for towing at 1,900kgs but, to be honest, I would not be able to live with the subsequent fuel costs.

This a great pity, because in all other respects, the engine is eminently driveable anywhere. The car is exceedingly wieldy, possessing the most wonderful steering feel and a complete lack of nasty feedback. The ride quality is sublime and its sportily-biased handling envelope is wonderful, with compliant damping and spring rates that make the Sportage a delight to drive on any road.

Perhaps it is because I am an old romantic that I have fallen head-over-heels for the latest Kia Sportage. There is a model in the range to suit most budgets and travel demands. I would dearly love to live with an example but my choice would reside with the diesel version. Mind you, at £24,350 all-in, the 1.6T-GDi in GT-Line trim does make a rather compelling proposition.