Continuing our examination into the state of freelancing in the UK, we’ve crunched the numbers for January 2016 and the results are somewhat muddled.  The data suggests that the figures for UK freelancing have – in the main – returned to the levels seen in November of last year.  A more likely prognosis however, is the likelihood that last month’s data was inaccurate.

According to Linked In, the number of UK workers using the term ‘freelance’ in their title has almost halved from last month.  This either represents a mass panic as the pre-Christmas optimism of a New Year’s career change has rapidly thawed – or that the returned data from December 2015 was not valid.  Only time will tell (as this series continues) – but at this time, the latter option is the more likely.

With the exception of the drastic (and continued) declines in the numbers of freelance Management Consultants and Computer Software specialists, all freelance professions seem to be holding steady in terms of UK numbers.

In our examination of the geographical displacement of UK freelancers last month we set out to examine whether the rise of Uber drivers would tilt the balance of freelancers (observing a near trebling of London-based freelancers – in spite of the question mark over the accuracy of data); but searching for ‘Uber’ or ‘freelance driver’ returned no results on Linked In whatsoever.

Anecdotally, a large number of Uber drivers are undertaking this work to supplement an existing income stream; so either they don’t want to advertise the fact – or they are simply not users of Linked In. We’ll take another look next month, and maintain a watching brief. 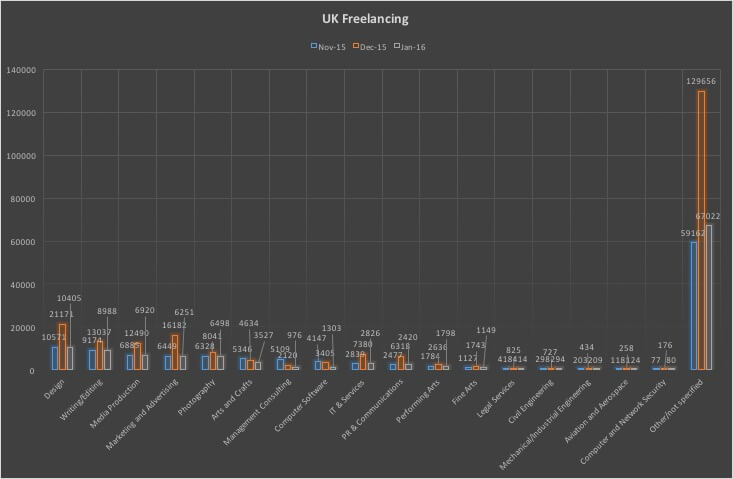 In terms of geographical displacement, a strong growth in numbers was observed in freelance workers in all the major UK cities – with the number in the capital showing the healthiest increase (around 11,000 on November’s figures).  We have hitherto been unable to assess whether this overall growth is the rise of the freelance driver; and with overall numbers remaining steady, the major cities’ growth in the freelance population would seem to be at the detriment of the smaller towns and cities in the UK. 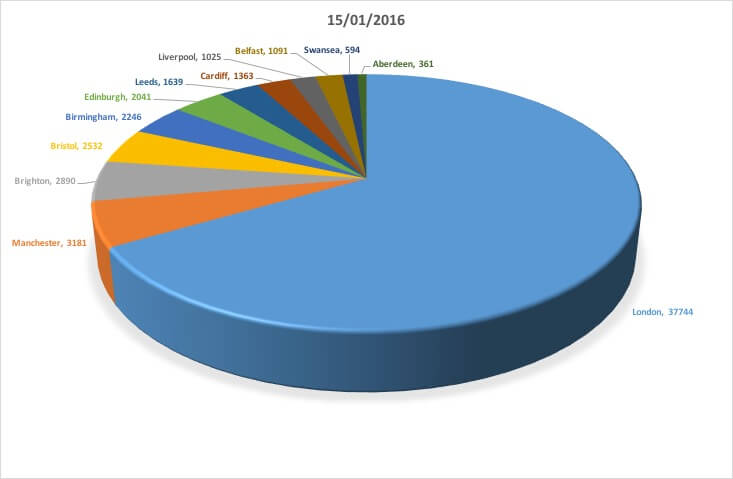