Gravel not grovel, as Subaru Levorg takes to the higher ground

The latest Subaru Levorg model demonstrates its enthusiastic suitability for fans of the multi-surface, all-weather mode of travel, writes Iain Robertson, who believes that Subaru‘s return to form is not just long overdue but essential.

‘Feel’ is such an amorphous non-entity to describe. What feels good to me, might not even register in the cranial masses of other observers, or even those fortunate enough to experience it in the first place. Of course, ‘feel’ can be immensely tactile. It can be tangible. It can help to differentiate between one texture and another. However, the feel I am talking about is that difficult to define atmosphere, or impression, that is imparted by something that operates through several parameters but creates an impact possessing further reaching ramifications.

From a purely personal standpoint, I love the feel of many things. I love my hide armchair in the living-room, because of its feeling of unerring comfort; it is my escape from the revolving chair in the office, or the driver’s seat of my car. It gives me a comfort zone. One where I can sleep, should I wish, or relax, or from where I can relate with visitors and friends, while retaining control. The ‘feel’ is all encompassing. 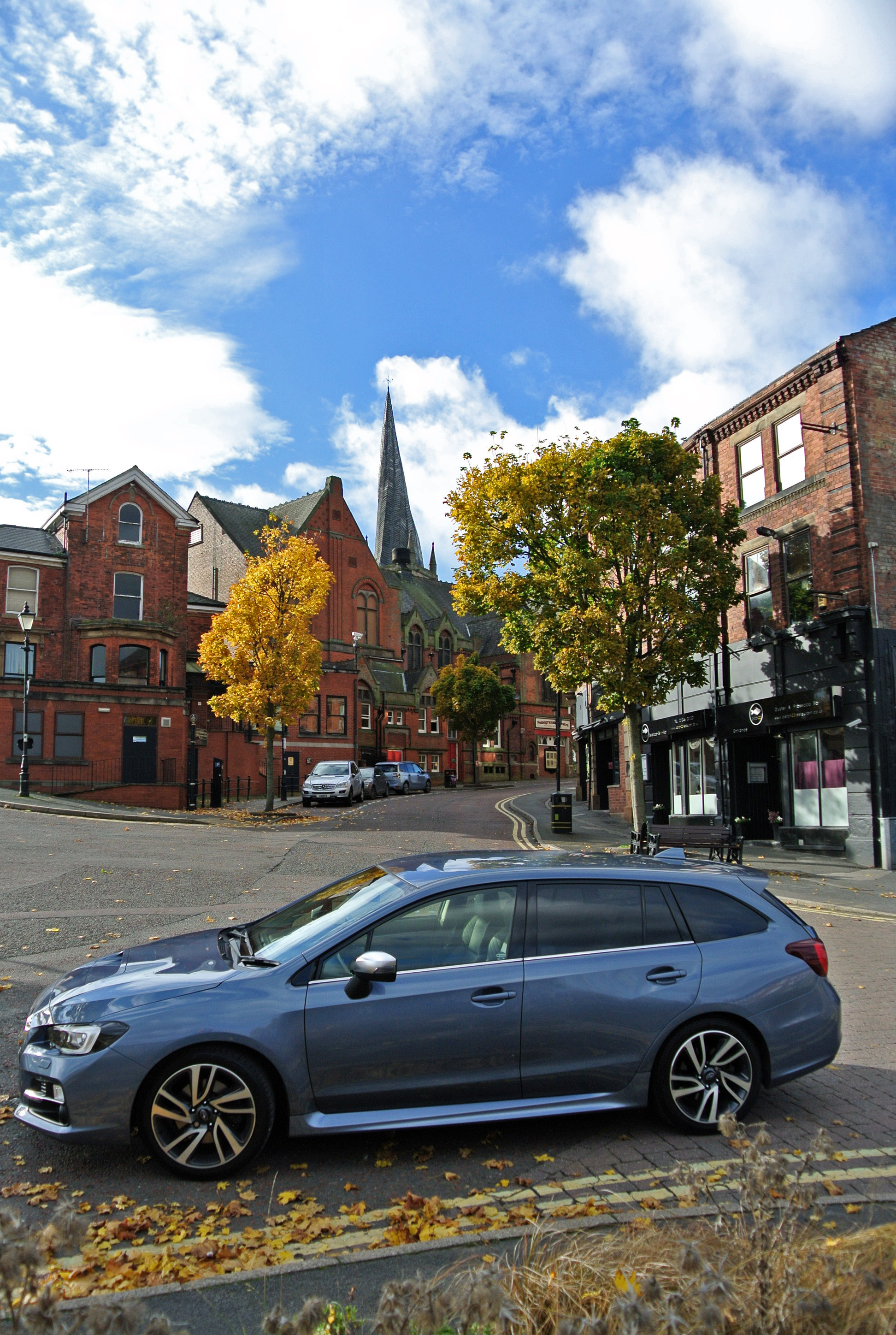 One of the most vital aspects that feel can transmit, especially in automotive terms, is responsiveness. These days, we are transported in largely soulless devices that are engineered to do their level best to remove us from the actual medium of feel. One of the most disappointing for me lies in the manner by which steering geometry works. In my view, steering is THE most important element of vehicle engineering. Get it wrong and an imbalance ensues, which is translated into a combination of nervousness and varying degrees of unsettlement, none of which endears the individual to his, or her, car, or vice-versa.

Around a decade ago, I used to believe that the only brand of motorcar that could get close to an ideal in steering terms was BMW. Unsullied by the complexities of front-wheel-drive, its front wheels could be directed to respond perfectly to the three-dimensional forces playing on it and the brand was able to live up to its promotional soubriquet of ‘the ultimate driver’s car’. Not any more. In fact, BMW has conned its customers into believing that it can still live up to that claim but it cannot and does not. BMW steering is among the worst across a wide industry.

Before you think that I am being unnecessarily scathing, my drive in the Subaru Levorg has been so revealing that I now have a fresh champion, in a field that I was starting to believe was being ignored by all carmakers. The steering of the Levorg is the best that I have experienced in the best part of the past ten years. Despite possessing four-wheel-drive that has been engineered symmetrically in the time-honoured Subaru manner, the company’s well-weighted, self-centring and speedy (2.8 turns lock-to-lock) steering is no less than delicious to wield. It should defy all logic, as it is the latest electronically-managed type of linkage, but it imparts a sincerity and integrity of responsiveness that makes the enthusiastic driver feel like a king at the wheel.

Combined with suspension that is set in a firm but well-controlled manner, with its inverted (motorbike-style) front McPherson struts and pseudo-wishbones to which each wheel is attached, the cornering is flat, roll-free and occasionally unnerving with its unerring stability and surgical accuracy. I suggest ‘unnerving’ because of the speed and agility imparted to the driver, at a level that is, at best, unusual in a family car, let alone a sporting machine. The ride quality is sublime. Okay, not in a Citroen-esque style of fluidity but more in its ability to absorb mid-corner road surface bumps, as if they did not exist. Yes. You can hear them but you are never troubled by them.

Having mentioned the transmission, it is worth highlighting that it has been ingeniously re-engineered to avoid the typical revs-soaring annoyance of most CVTs, instead ensuring that throttle depression runs more in line with the torque delivery. In other words, full-throttle will not result in the ultimate performance, whereas light throttle depression results in a surprising turn of speed. The all-round disc brakes provide assured stopping power, which links with the 4WD system in expected and a most efficacious manner.

Perhaps the most entrancing aspect of the Levorg lies beneath the bonnet. Displacing only 1.6-litres, the light-pressure turbocharged engine produces just shy of 168bhp and around 170lbs ft of torque. These figures are not massively exciting but the manner in which the power is managed, driving through the firm’s Lineartronic constantly variable (non-geared) transmission, is outstanding. Perfectly suited to trans-continental grand touring, it allows the Levorg to live up to its GT designation. In fact, the way in which it despatches 0-60mph in around 8.6 seconds, before coursing on to a top speed of approximately 130mph is better than the class average and feels positively Germanic in its constancy of delivery. In other words, it is not so much the blast off the line but the longer-legged cruising capability that is its great strength.

Yet, there are two elements of sadness that effect the engine. Firstly, despite being of ‘boxer’ layout, that is four cylinders set out in two horizontally-opposed banks, also known as ‘flat-four’ format, the engine note is now so muted that all elements of the ‘boxer’s’ character have been erased. Secondly, its CO2 rating of 164g/km is no less than expected of a flat-four engine and equates to £185 annual road tax, which is steep for the class and remains an unfortunate downside of the engine technology. However, I balance those aspects with the exceptional drive train integrity that the Levorg presents. The crankshaft of the engine is perfectly in-line with the 4WD transmission, which is the determining factor behind the car’s signature and hugely impressive chassis dynamics. If that is the trade-off, then I can verge into a semi-happy zone. 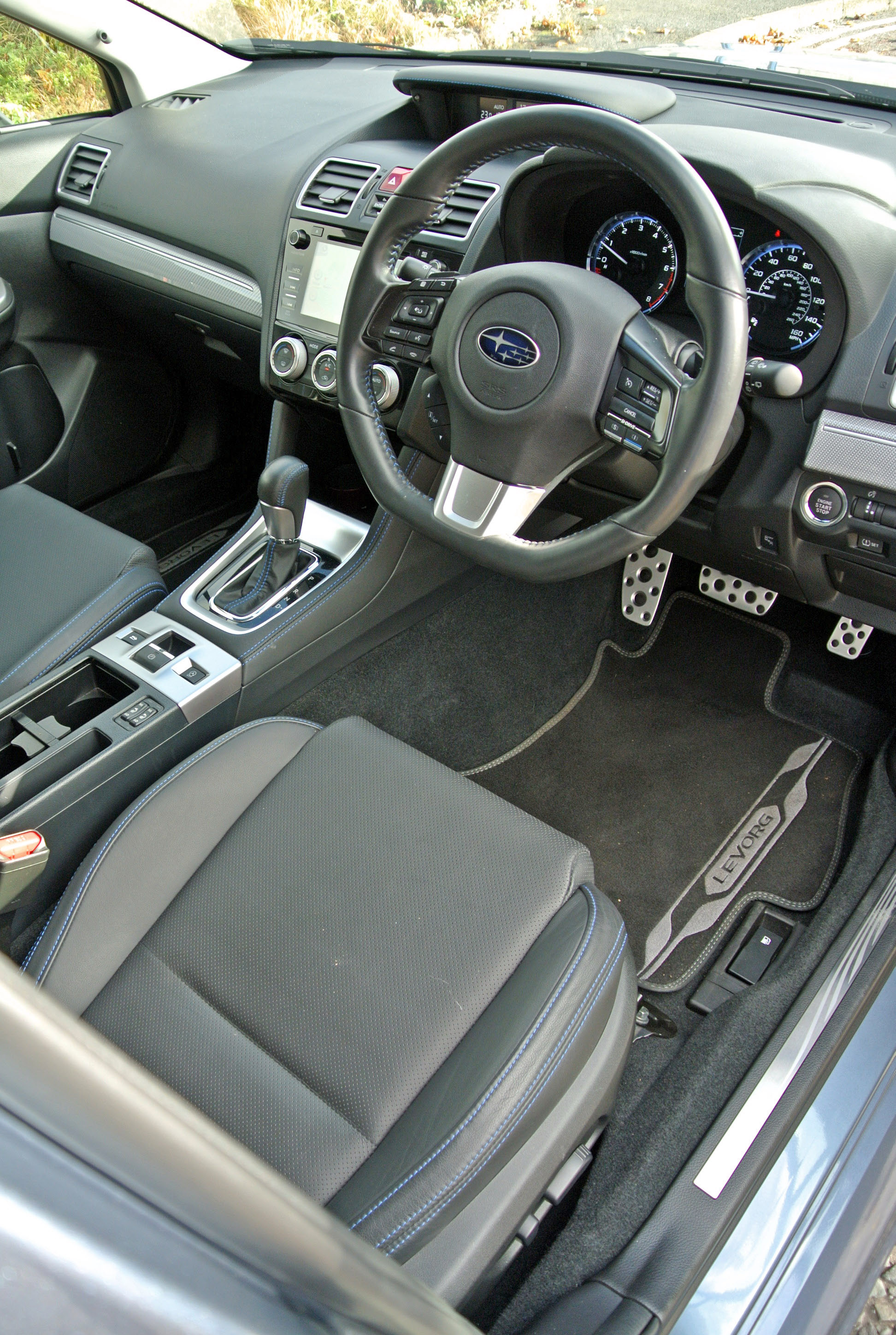 While I do miss the frameless doors (Subaru doors always possessed a framework, although the side glazing did not), which I understand had to change to a more conventional type to meet side impact legislation, accessing the flexible and spacious interior of the Levorg is closely akin to entering the ‘Tardis’. At just 4,690mm in length, the cabin is exceptionally well-proportioned, offering plenty of space fore and aft, with superb ‘one-touch’ and completely flat-folding of the rear seats to create almost 1,500-litres of load space. It seems that Subaru has got practicality managed to perfection too. The solid but high-quality, carpeted boot floor sections lift to reveal a deep storage bin and a less accommodating space to add to the proposition. 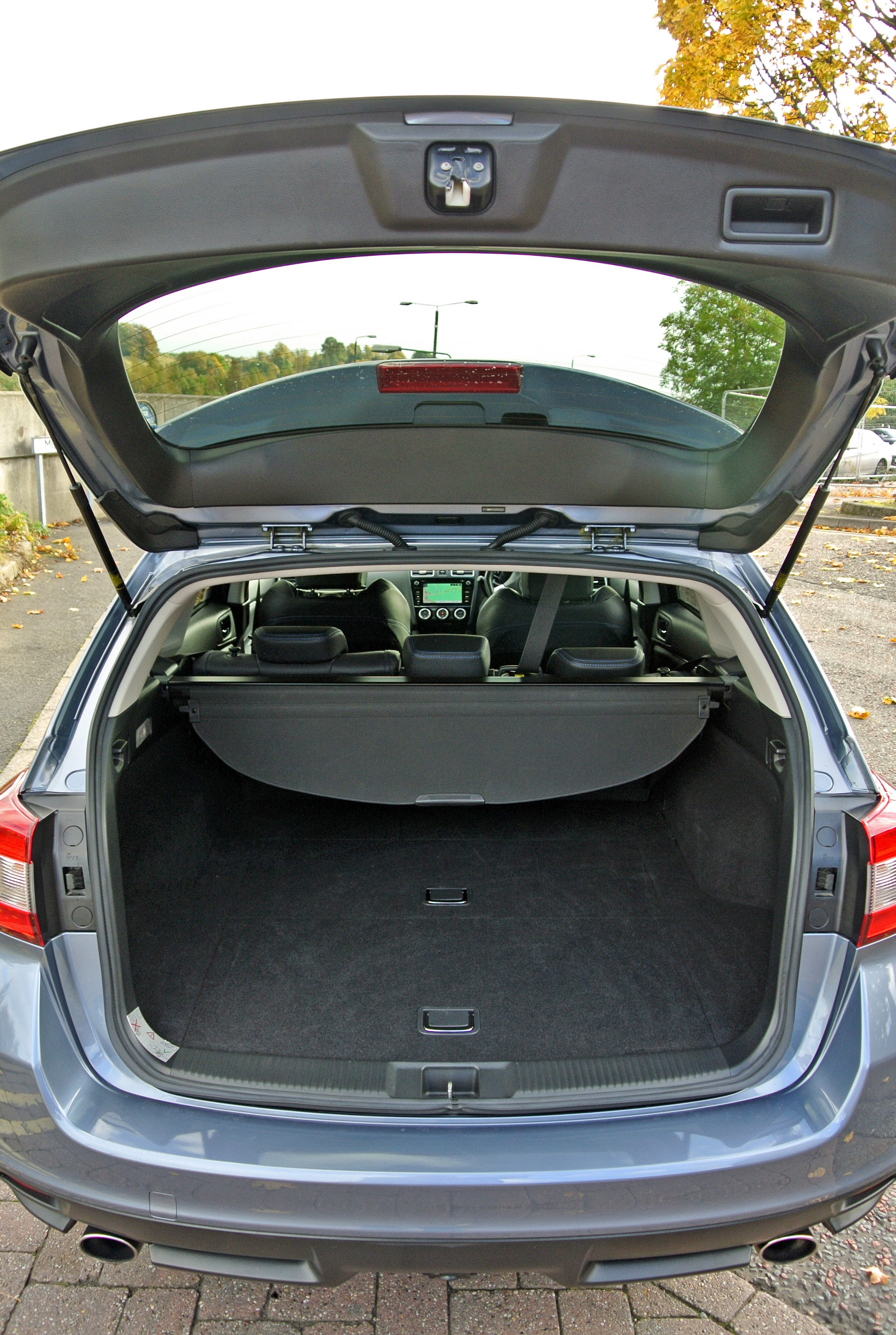 The driving position is multi-adjustable, with the electric motors controlling a wide range of seat movement, supported by a rake and reach adjustable steering column. The hide covered seats are comfortable and supportive, regardless of journey length. More importantly, the acres of unimpressive grey and hard plastic mouldings that have made up most Subaru dashboards of the past 10-15 years have given way to a softly padded alternative that hikes the interior quality of the Levorg onto a loftier plane. The door cards are still less than subtly cheap but the mix of surfaces, whether of silver painted, or mottled, finish, do not look out of place.

Even the centre stack is vastly improved, with more pleasant graphics and a clear sense of purpose. The steering wheel, in the modern idiom, is packed with minor switches that control most main functions on the touch-screen. Located on its reverse side are the up and down paddles for the simulated gearshift mechanism, which does work most effectively. However, the improvements made to Levorg extend into the instrument markings and even the quality feel of the column stalks. The cockpit of the car is a warm and welcoming place to be. 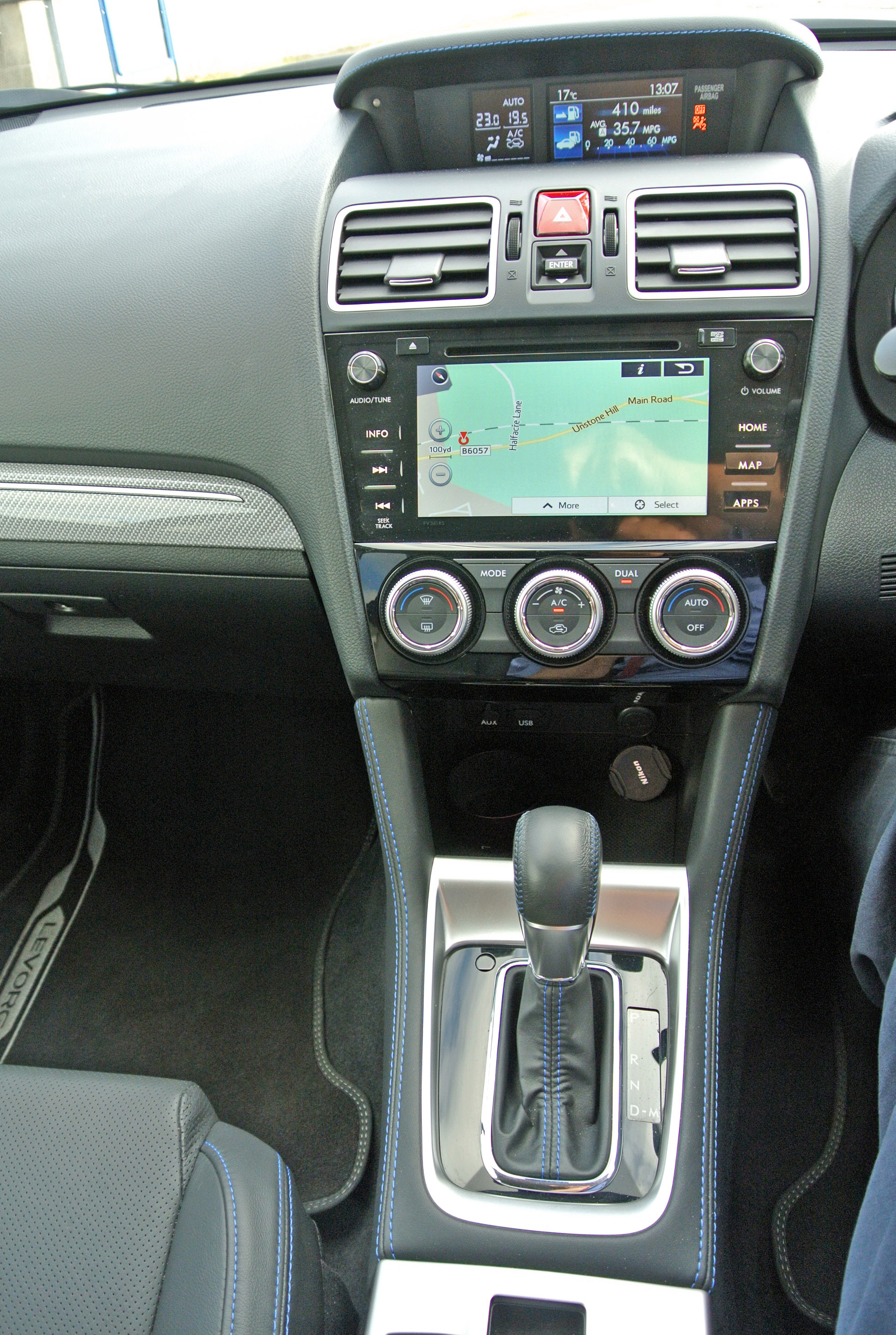 To state that I have truly fallen in love with this Subaru would be almost an understatement. It is certainly the best Subaru that I have driven in more than decade, although it retains all of the best qualities for which Subaru models have been renowned and ploughed their own unique furrows for many years. In some ways, its svelte sleekness owes much to the Legacy model of at least two generations ago, while its sporty estate car styling is not dissimilar to the Sportback versions of the original Impreza. I am delighted that Subaru has not turned its back on its origins, which would have been very easy to do, especially bearing Toyota’s investment in mind. It is an excellent, practical, safe and enthusiastic family car that even one of my next door neighbour’s hens fell for, as it made the rear window wiper its perch for four nights!  Mind you, it needs to be, carrying a price tag of £27,495, which makes comparisons with rivals quite difficult. Yet, thought of as a typically unique Subaru proposition, I reckon that its niche is well served.