Welcome back Whizzkid in the latest Suzuki Ignis

Suzuki insists on describing its new Ignis as an ‘SUV’, which Iain Robertson states is partly true, but it is a trawl through the marque’s past that reveals its actual inspiration and the resultant new model will monster the city-car scene.

Evolution is an essential element of existence, otherwise we would never have emerged from the primordial slime, about which the illustrious Sir David Attenborough never tires of telling us, in successive series of the natural history programmes that his mellifluous tones elucidate. I can recall from studying medicine a few decades ago that, much like our external tails, the once troublesome appendix, in the human digestive system, would disappear and some babies born recently show signs that it has.

Moving away from that ‘bombshell’, while many of us seek change, not just because it is as good as a rest but because it demonstrates that we are moving things onwards and upwards, there are just as many that resist it. Yet, advancement is a necessary aspect of development, however much we might suggest that we enjoy living in the past. Therefore, we do tend to cling onto comfort zones and change, when it comes, is often little more than a gentle massage of that, with which we feel comfortable.

Were you to look at the Mars Bar, invented by Forrest Mars, the estranged son of American candy maker, Frank Mars, who set-up his British sweet empire in Slough, of the early 1930s, the actual changes to it have been little more than evolutionary. I can recall during the early-1960s watching my father unwrap the paper outer of his favourite chocolate-coated nougat and caramel treat, which he used to slice, using his pocket-knife, into carefully judged slivers, savouring every one of them but always leaving some for later. 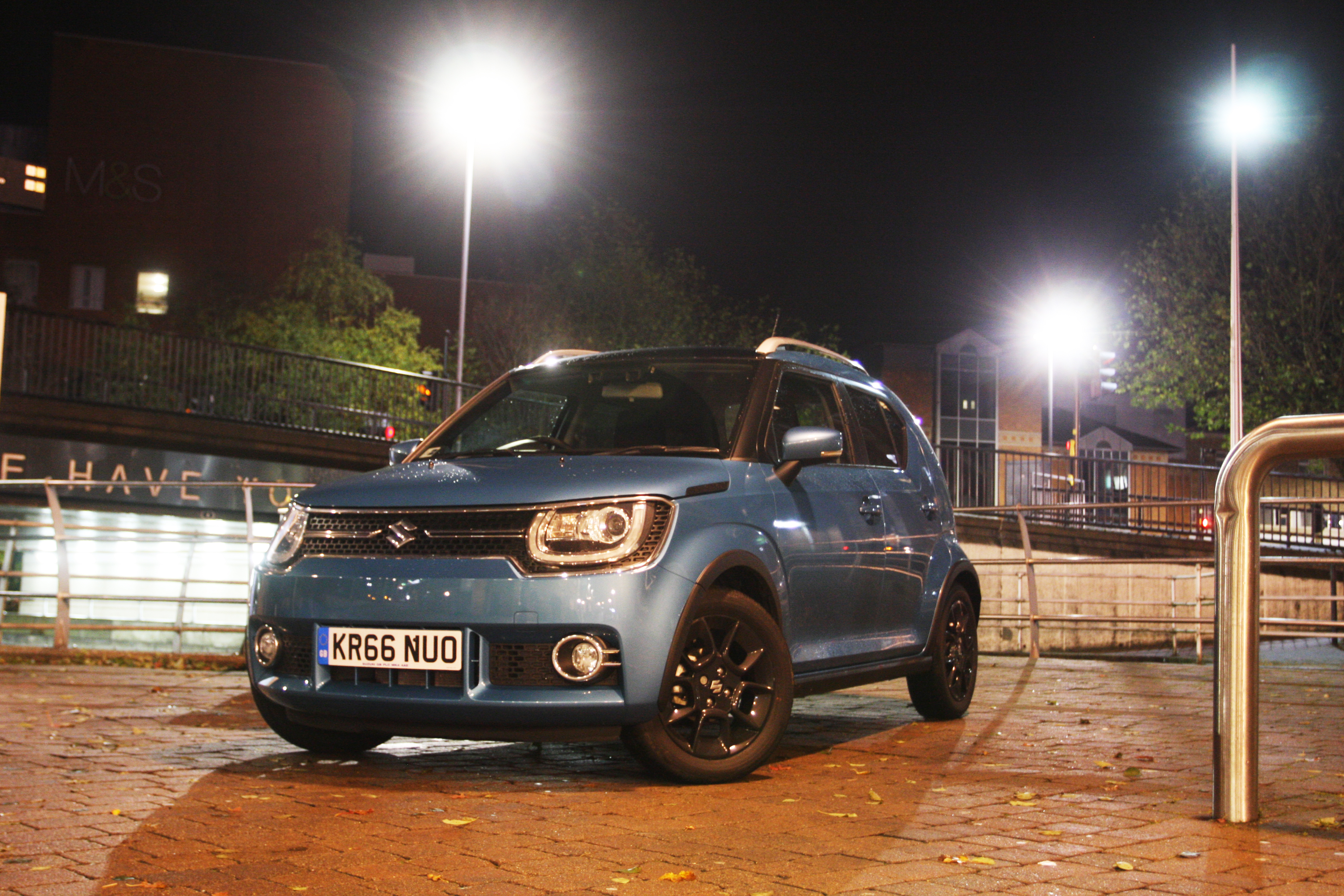 Sadly, it is a count-line that has reduced considerably in size since its invention and its once rich contents have been reformulated several times since 1932, mostly as a means to retain unit profitability. Suzuki Cars is, in some ways, a bit like a Japanese alternative to Italian Fiat, a carmaker renowned for producing immense quantities of diminutive motorcars. This is not to state that larger cars have not been included in its model line-up, as evinced by the Kizashi model, which went on sale in the UK in 2012, although it had been sold in North America since 2009. Despite its technological appeal (it was a good looking car, packed with practical technology, such as 4WD), it was not Suzuki’s heartland and it ceased UK sales just two years later. Market forces sent Suzuki scurrying back to the smaller cars that are its signature.

Between 1979 and 1982, when production ceased, Suzuki manufactured a cheeky and cheerful rear-engined coupe, which was marketed as Cervo in some markets but was sold in the UK as the SC100, with due deference to its 1.0-litre engine, under the nickname of ‘Whizzkid’. Although based on a Japanese ‘kei-class’ (city car) model, it soon caught the imagination of 4,696 British buyers and, while 4,600 of their cars have all but dissolved into roadside memory, there are still 96 examples registered with the DVLA. It is becoming a modern day classic.

To produce its latest Ignis, Suzuki leant lightly on the styling cues evident in the Whizzkid, notably the hinted ‘gills’ in the rear pillars but also in its coupe-like profile. Interestingly, Vitara-like black slats are carried in the front wings, just below the line of the clamshell bonnet edges. Despite being struck by its truly tiny proportions, cracking open any of its five doors reveals a ‘Tardis-like’ interior, with plenty of space even for a two-metres tall bloke like me to get remarkably comfortable. Okay, it is never going to win total nuclear family approval, as the 0.4 of the much-vaunted 2.4 children will not have much space available. However, the rear seats slide fore and aft, which means that either there is copious space for a shopping expedition, or acres of legroom for two adults. Interestingly, mums with babes in carrycots will love the ability to strap-in the cot securely and then slide the seat as far forwards as possible, to make reaching back to tend to a complaining child significantly less of a chore. 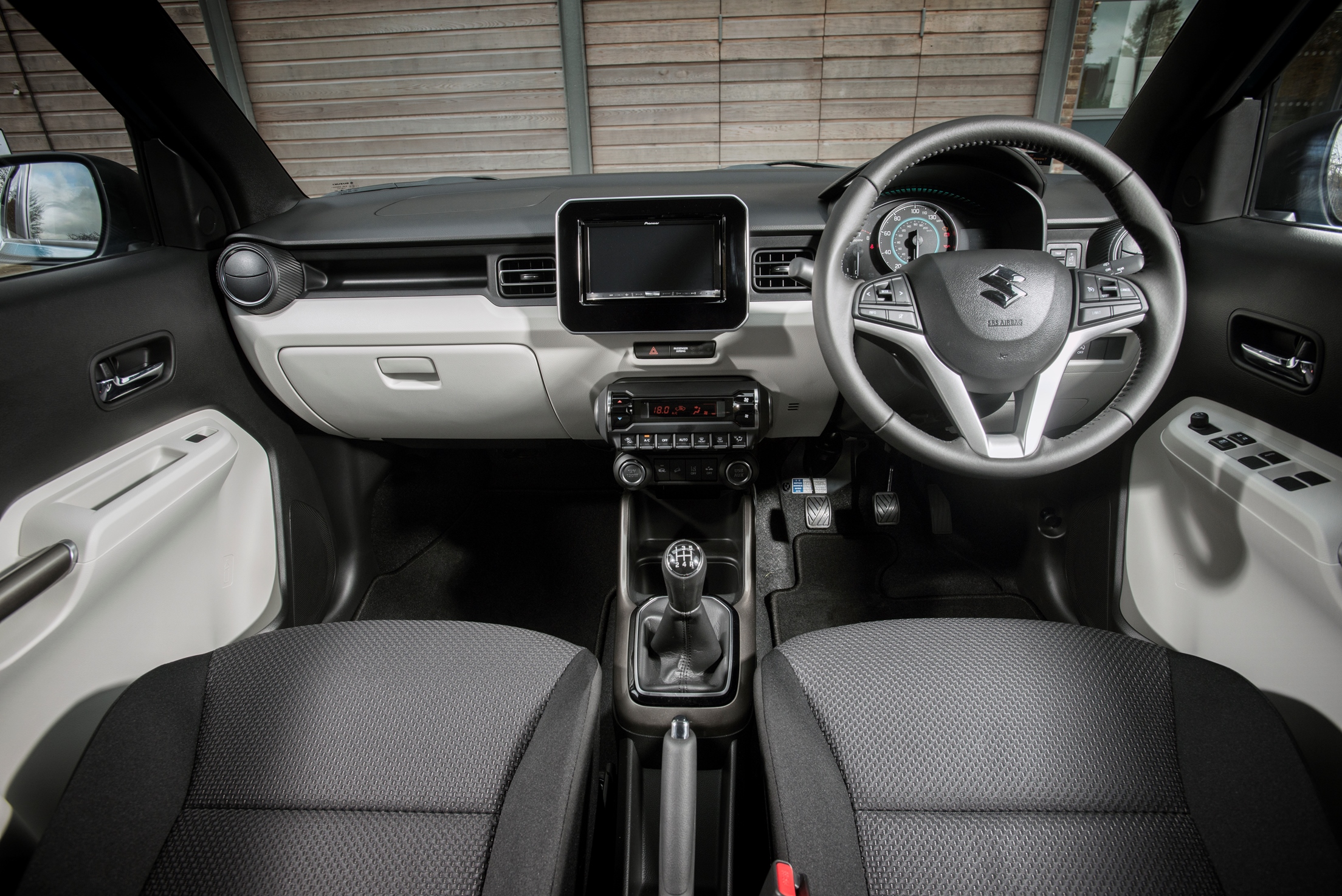 With its expanse of lower interior trim finished in ‘white’, the upper sections in dark grey as usual, while lacking a more compliant dashboard finish (come on, Suzuki, give us ‘soft-touch’!), it is certainly far less funereal in the Ignis’s cabin than the majority of its city car rivals. The driver is fronted by an instrument pod that contains analogue speedometer and rev-counter dials. The centre console is predominated by an iPad-type screen that contains master controls for the optional sat-nav, stereo system and mobile phone, below which is a neat heating and ventilation control strip, with a row of Mini-like rocker switches beneath it. There are plenty of slots and pockets for in-car storage purposes.

Beneath the bonnet of Ignis is the only engine option, a 1.2-litre, four cylinder Suzuki DualJet unit developing 88bhp, mated to either a slick 5-speed manual, or the amazingly good, automated, single-clutch, AGS alternative, which drives the front wheels. However, you can have the benefit of a mild-hybrid version and even a 4×4 transmission on the top SZ5 trim level. In all cases, the engine has already served purpose in the larger Baleno model and with a similar kerb weight (855-920kgs), the performance expectations are broadly similar. 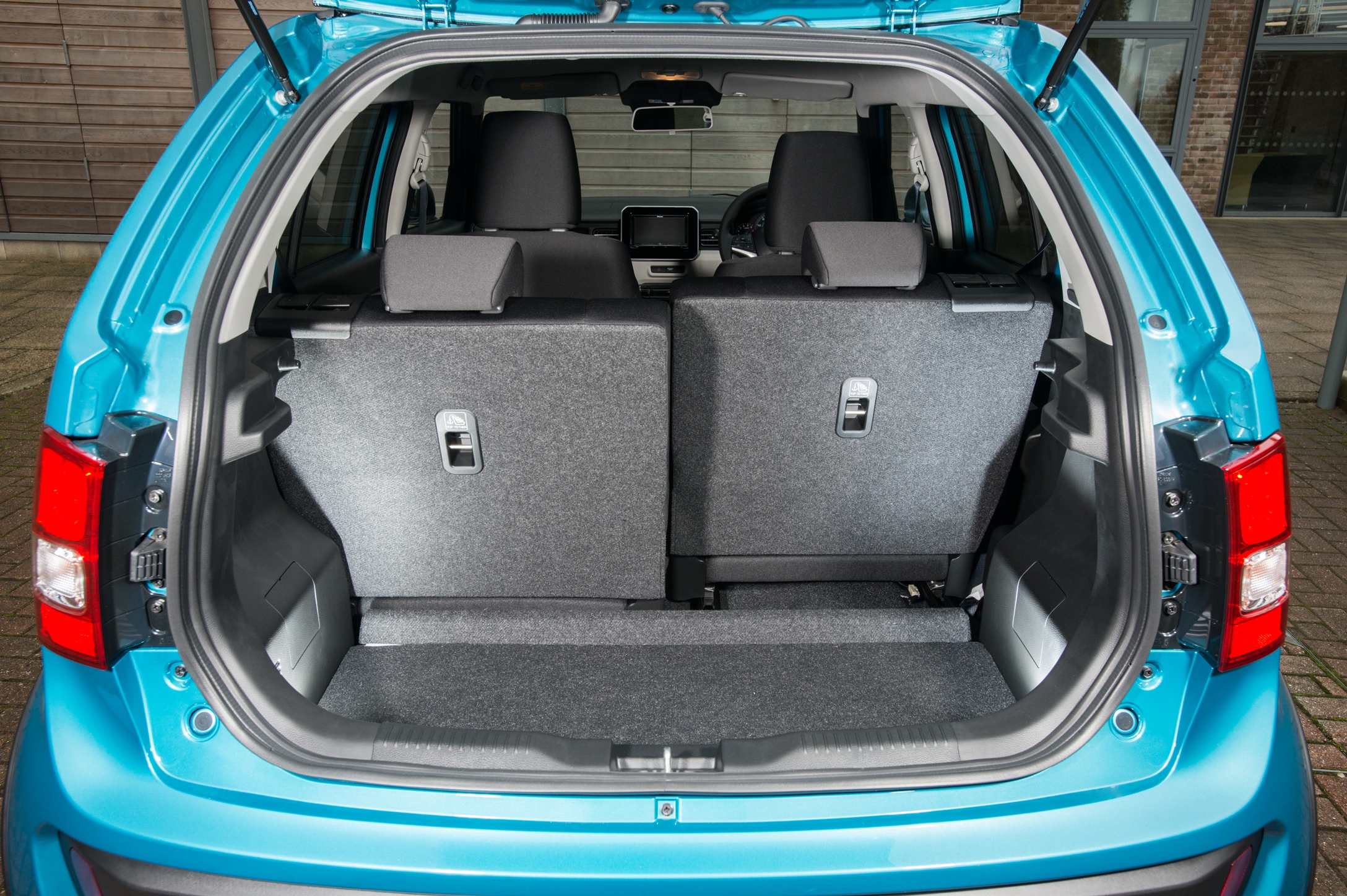 The quickest of the Ignis family is the SZ5 4×4, which can scurry from 0-60mph in around 10.8 seconds, before reaching a top speed of about 106mph, which I do not need to inform you is more than gamey enough not merely for punting around town but also for indulging in a little bit of cross-country enjoyment. It is fairly easy on the juice, with an Official Combined fuel range of 60.1-65.7mpg, the mild hybrid (SHVS, with ‘stop:start’ and brake energy regeneration technology) being the most frugal of the line-up, which also delivers 97g/km on the CO2 emissions front (the others range from 104-106g/km). Knowing Suzuki, as I do, these figures will be attainable to most drivers. It is worth highlighting that Suzuki has so much confidence in the fuel range of its Ignis that the tank capacity has been slashed to little more than six gallons, as part of the firm’s overall weight-shedding game.

Although I have not, as yet, driven the other models in the range and I am looking forward particularly to the AGS version, which I shall be testing in early 2017, my exclusive drive in the top-spec SZ5 4×4 was eminently satisfying. The new Ignis offers plenty of verve from low engine speeds and a decent spread of torque, which ensures that constant stirring of the gearlever proves unnecessary and aids fuel economy. Its suspension is firm, yet compliant enough to avoid becoming unsettling on our 3rd-World road surfaces. The steering is direct and beautifully weighted, while the brakes provide assured stopping power.

The 4×4 system is a development of the drive-train fitted to the Swift model. Because it uses a viscous coupling to engage the rear wheels, there is no requirement for a weightier third differential in the transmission. Therefore, when ‘slip’ is detected it kicks in automatically and retains high levels of grip and stability for the driver. It is so effective that Suzuki has even taken to referring to the Ignis as an ‘SUV’ and I am informed that it is as capable in an off-road situation, as a Vitara model (ground clearance notwithstanding). I am keen to sample its broader range of capabilities in due course. 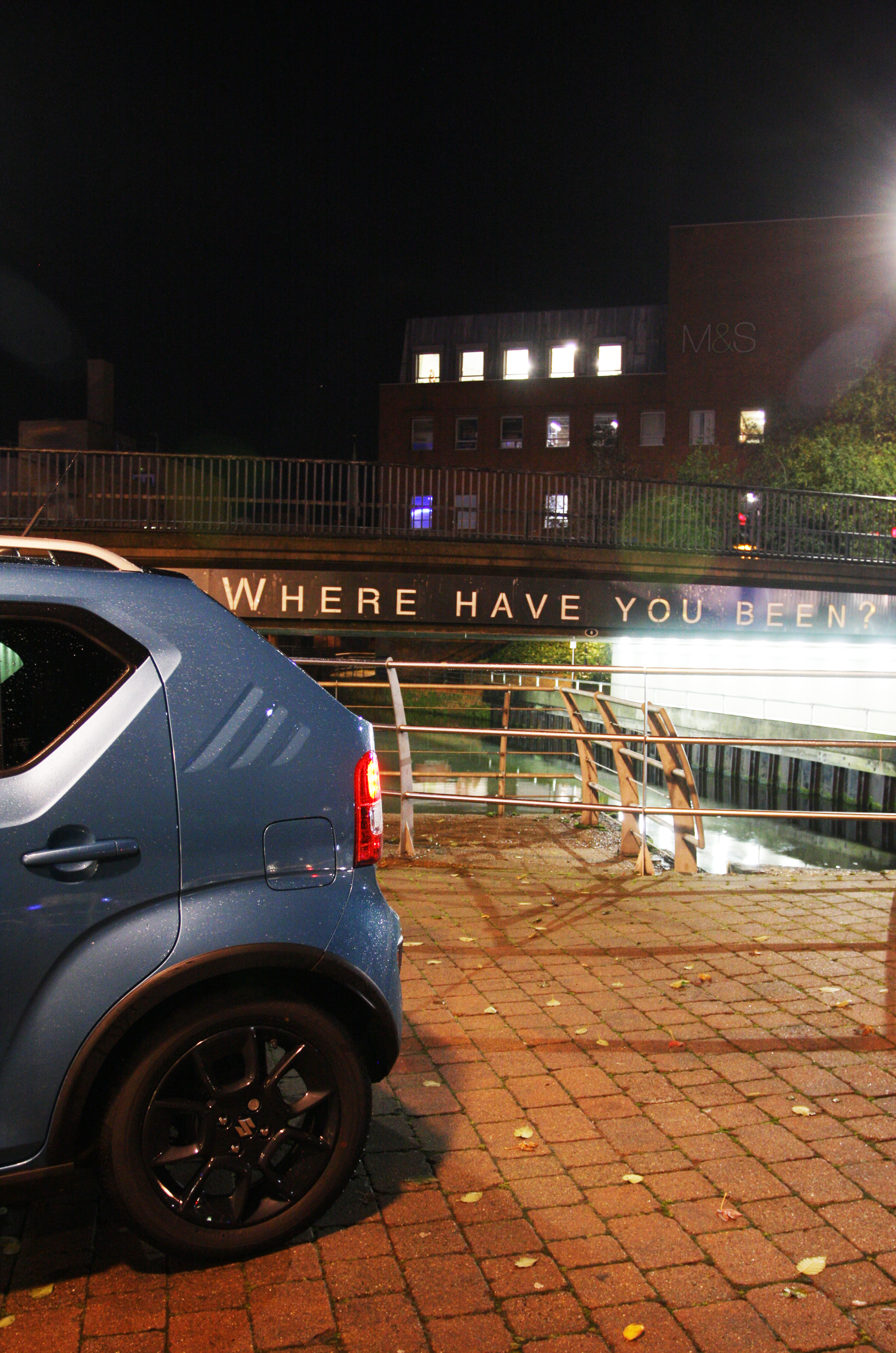 The Ignis’ cause is helped by fitting 16-inch diameter alloys to all but the entry-level model (15s). However, the system is augmented by incorporating both Hill Descent Control and Grip Control (at speeds of up to 18mph). The only penalty is a 30% reduction in boot capacity, due to the space required for the 4×4 system below. Other safety addenda include the first fitting of a dual-camera collision mitigation system (on SZ5 versions), as well as the customary mix of airbags, stability control and even a lane departure warning system.

A cheerful, extended range of 11 colours and various customising options, across SZ3, SZ-T and SZ5 trim levels, standard DAB radio and Bluetooth highlight that Suzuki is addressing customer demands most comprehensively. Prices are expected to start at around £11,000, with the top version retailing for an expected £13,500, although these figures will be confirmed, when the Ignis goes on sale in mid-January 2017. For what could be the ultimate commuting vehicle, business users will gain immense benefits from contemplating an Ignis.