Style, presence and unerring practicality are sometimes awkward bed-mates but, highlights Iain Robertson, Vauxhall proves beyond doubt that its Grand Sport model can take a Tourer post-script to an ideal and spacious conclusion.

You do not have to be Captain James T Kirk to appreciate that ‘space is the final frontier’, however stellarly grandiose that statement was intended to be and how apposite it is for the modern car user. When a common discussion thread surrounds invariably the knack of ‘downsizing’ in domestic terms and ‘rightsizing’ in an automotive sense, we are all placed under pressure to de-clutter and eject that which might otherwise drag us down in societal terms; after all, we cannot be seen not to comply.

The simple fact is, I have been enduring aspects of those remits personally in recent times, both with the car I choose to drive and with making a house move. Lord above! There are boxes that I placed in the garage six years ago, when I moved into my ‘most recent’ abode, which I have never delved into, or even had the desire to retrieve (notably since hearing a gnawing sound from within the building, not dissimilar to a beaver working a Canadian spruce…). It is, therefore, abundantly clear that I have not needed any of them, or their contents.

Amusingly, while clearing out the place, there were several cardboard packing cases that needed to be repacked, as their bottoms had fallen out. This was when I discovered items that I never want to dispose of. Yet, what are they? Keepsakes. Mementoes. Okay, some were of moderate value, such as my old camera collection and somewhere in the region of eight pairs of high quality, compact binoculars that I have received over the years as ‘bribes’ from various car companies. My model car collection, well, that is something else altogether…it seems that I still crave space. 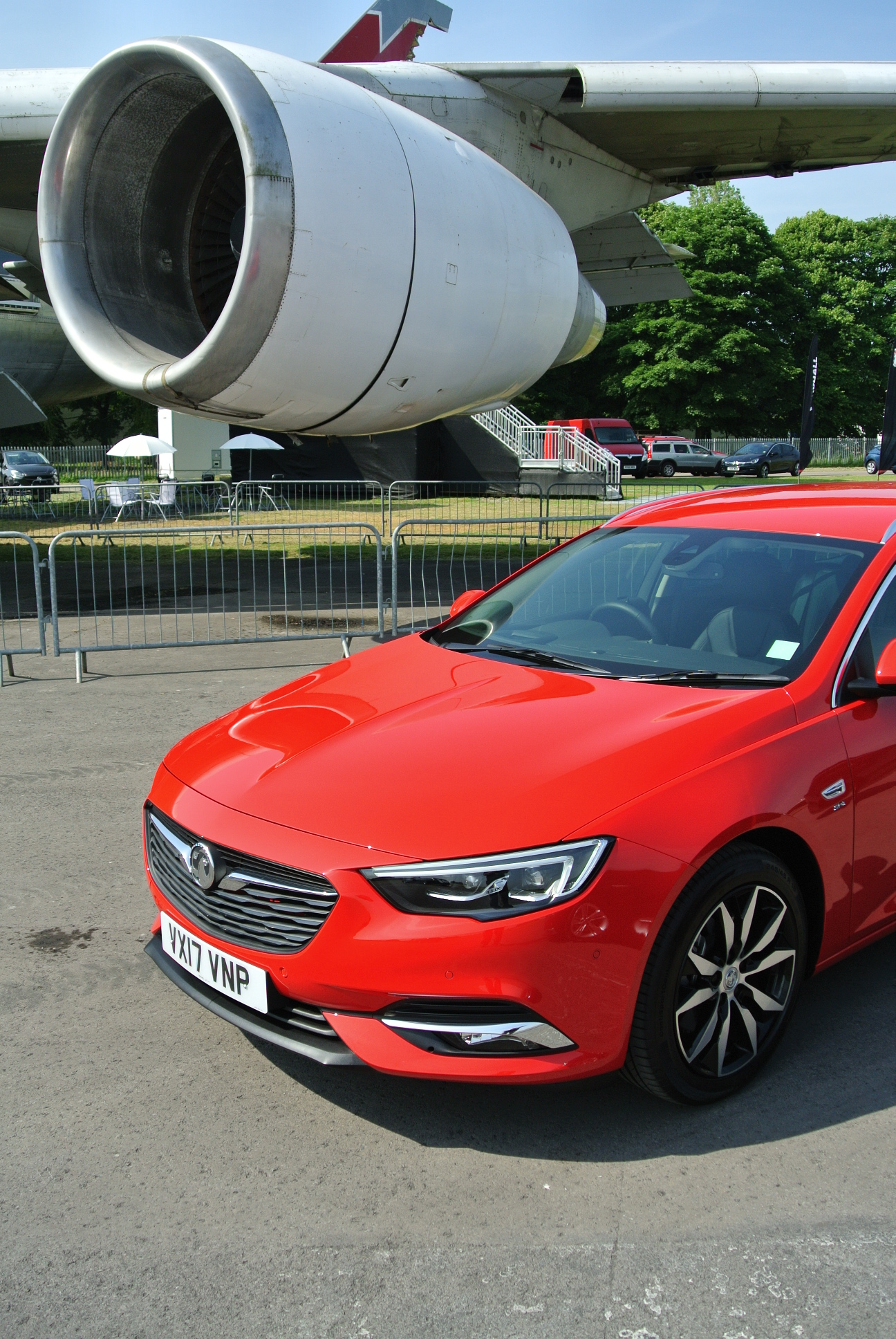 The property I have moved into is a downsizing exercise. I simply do not require extra bedrooms and bathroom facilities, however marvellous they might be, and just keeping them, complete with fresh sheets and clean soaps and towels, should itinerant friends and relatives suddenly shore up at my front door, is wasteful in extremis. Therefore, while an even grander Tourer version of the Insignia Grand Sport is definitely not needed in my household, I do know several potential owners for whom space and greater practicality are well-defined requisites.

A very good personal friend is but one of them. Of course, it is unlikely that he would invest in a brand new GS Tourer, as his distant Scottish roots would not allow such financial squandering to take place, even though the new Vauxhall is actually keenly priced (from £18,615; £1,500 more than the hatchback, although several list prices show that this model can be around £1,500 less than its forebear’s price tag). He is typical of the large estate car buyer and bemoans constantly the demise of the ‘big’ Citroen, or Volvo, station wagon. In fact, he owns an ageing C5. In many ways, he is like most SUV owners, in that they rarely use the 4×4 capabilities of their high running-costs cars, although possessing one is the key…because they might.

While that aspect covers the second-hand car market and there are loads of people seeking big wagons, the new car scene is predominated by the company car sector and, with 1,628-litres of useable loadspace, rear seats folded (560-litres, with them erected), which is around 110-litres greater than the previous generation Insignia and, now, for the first time in ages, a bit larger than the load deck of the very accommodating Astra estate, the GS Tourer will curry favour with corporate executives across several business classifications.

Opt for a higher-specification model and, apart from Flex-Ride (the company’s adjustable damper system), an 8-speed auto-box, the amazing and complex Intellilux LED lamp system, wireless mobile phone charging, with 4G mobile WiFi, keyless entry and ‘stop:start’ technology, your bank will be relieved of around £20-22,000. Put into perspective, a Skoda Octavia, a smaller and less accommodating rival, is around 10% costlier. I do not want to harp on about price all the time but the motor industry has been taking us all on a merry dance lately, so it is refreshing to see Vauxhall taking a more holistic view of both the market and its potential customers. The Insignia GS Tourer stands genuinely for value.

Yet, style, however superficial such a requirement might be, remains an important aspect, not least in the corporate car park. Just look at the Lava Red Tourer pictured above, parked alongside another space champion, the Boeing 747 ‘Jumbo’ jet. It is a very handsome machine that possesses a timeless appeal in a manner that makes the current Ford Mondeo look positively antique. The chrome trim strip that extends from the top of the A-pillar to become an element of the tail-lamp cluster has worked already for a certain Korean carmaker and takes the observer’s eye towards the Tourer’s obvious conclusion. 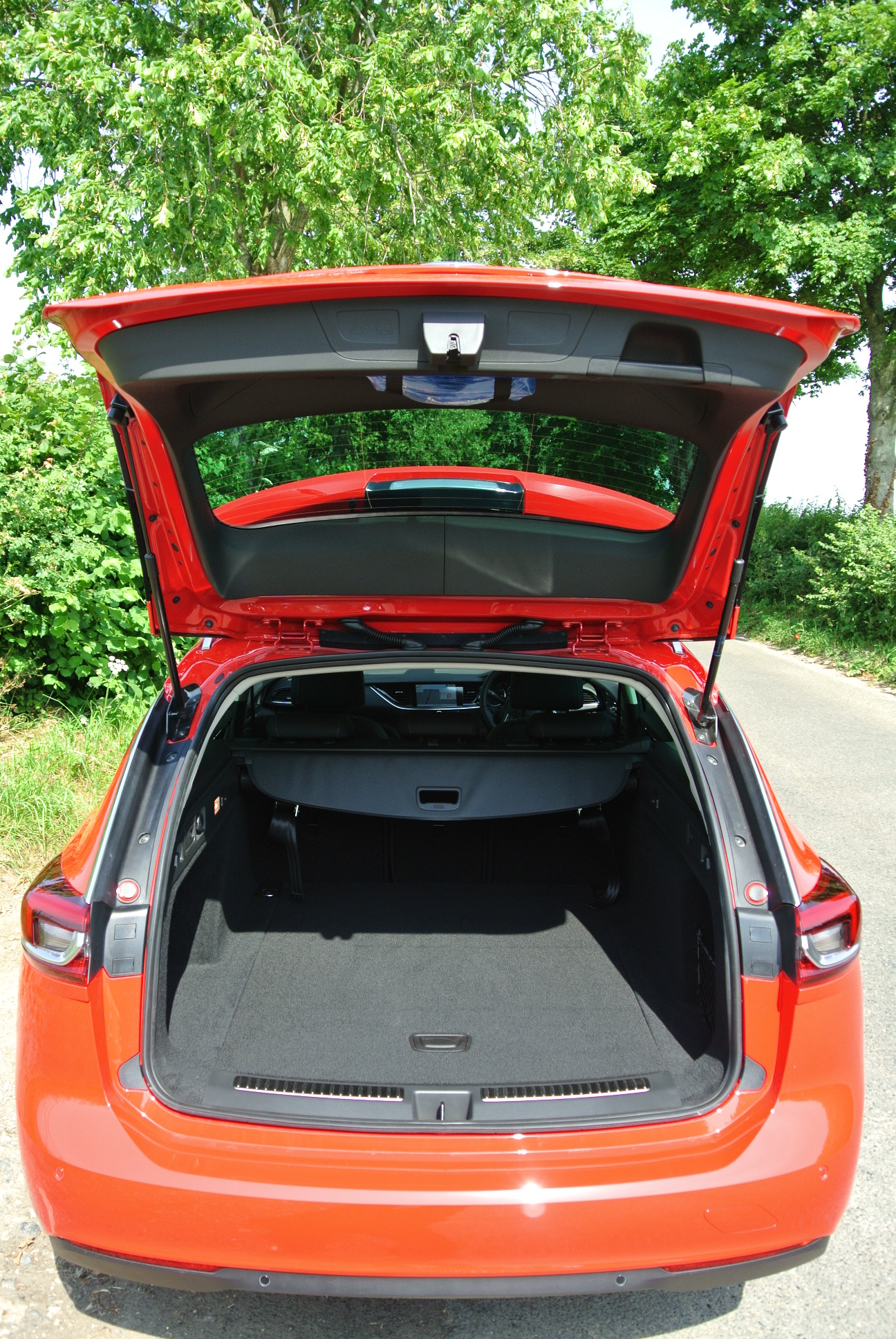 However, there is an optical illusion at play on the GS, in that the same trim strip appears to lower the coupe-like roofline. Crack open the tailgate and the load box suffers from very few of the space restrictions placed normally upon ‘lifestyle’ station wagons. Appearances can be deceptive and that space is cavernous, while remaining flexible in a thoughtful Vauxhall way.

The red car, in SRi specification, is powered by GM’s new 1.5-litre, 162bhp petrol engine. If you can recall from the launch piece written a couple of months back on the hatchback version of this car, Vauxhall has carved out a lot of excess baggage and reduced the model’s kerbweight considerably. As a result, for what looks like and is a large car, it manages to feel nimble and surprisingly capable on-road, turning in brisk acceleration (0-60mph in 8.4 seconds) and the knowledge that the car can top-out at around 138mph on a Teutonic autobahn. Its 62-litre fuel tank also affords it a decent range between fill-ups and, with a 47.1mpg Official Combined fuel return, that could mean upwards of 640 miles. Its 136g/km CO2 figure denotes a first year road tax rate of £200; £140 annually thereafter.

As you would expect of a test car, there are some extra cost items included in its specification, such as the Intellilux headlamps (£1,010), fore and aft parking distance sensors (£460) and the hide-covered orthopaedic front seats that are exceptionally comfortable and supportive (£1,155). The ‘head-up’ instrument display (£290), 8.0-inch colour instrument panel (£415), 18-inch bi-colour alloys (£405), driver assist pack (£595) and the ‘brilliant’ paint finish (£285) complete the package and hike its list price from £21,510 to £26,525. As ever, caveat emptor and do not get too carried away when ticking the options boxes, unless you really want all the toys. 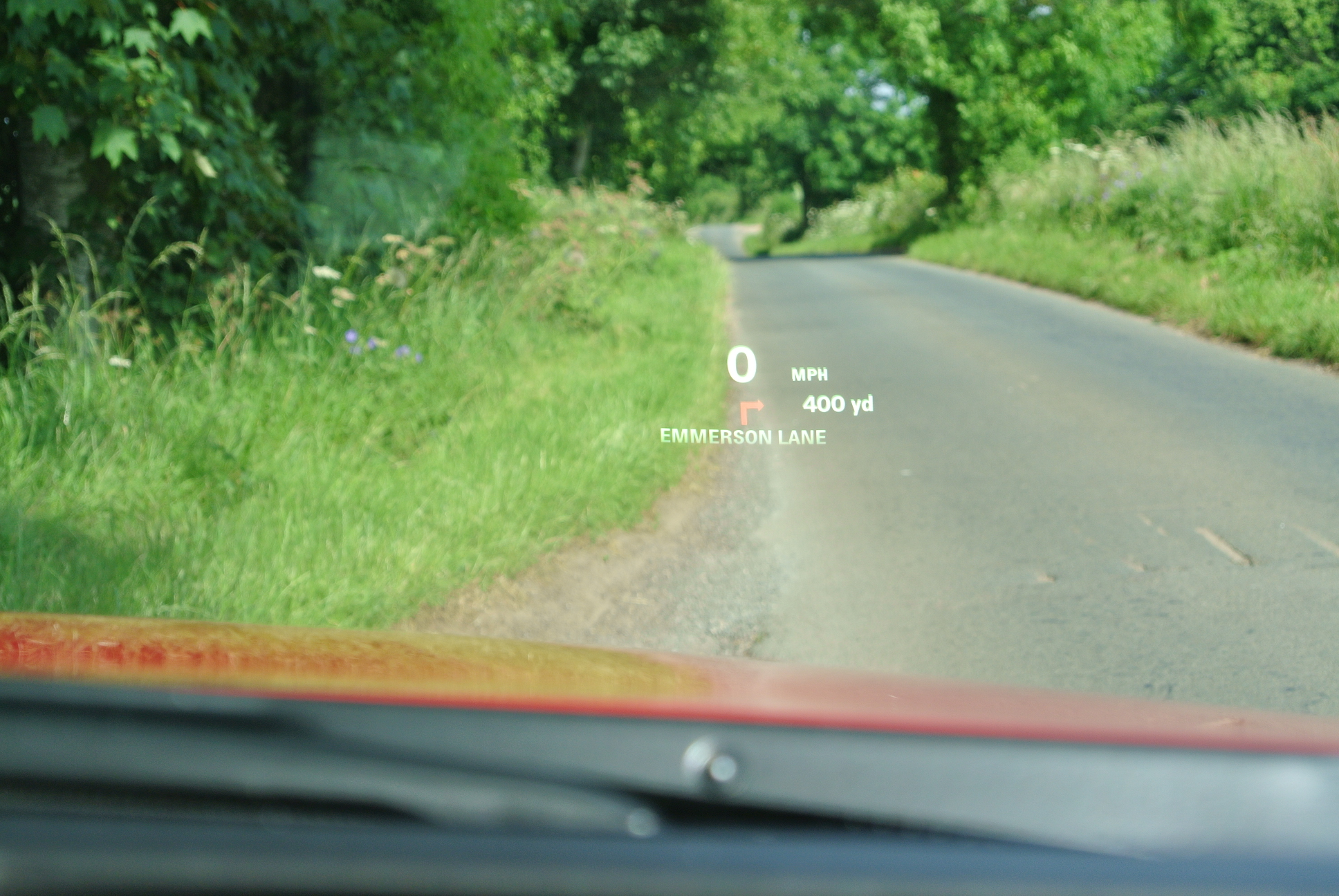 As an alternative, the 1.6-litre diesel that powers the aged-bronze example (the paint finish is named ‘Coconut’) lowers the initial overheads thanks to its CO2 figure of 112g/km and an Official Combined fuel return of 65.7mpg, which results in a potential range in excess of 1,000 miles. Despite producing only 107bhp, in typical turbo-diesel form, a decent 221lbs ft of torque delivers solid punch for effortless progress and the GS Tourer CDTi will crack the 0-60mph benchmark in 10.6 seconds, with a 127mph top speed potential. However, the first year tax is £160, with £140 fees in subsequent years. Listed at £20,940, in Design specification, it represents excellent value for money (as tested: £23,525). 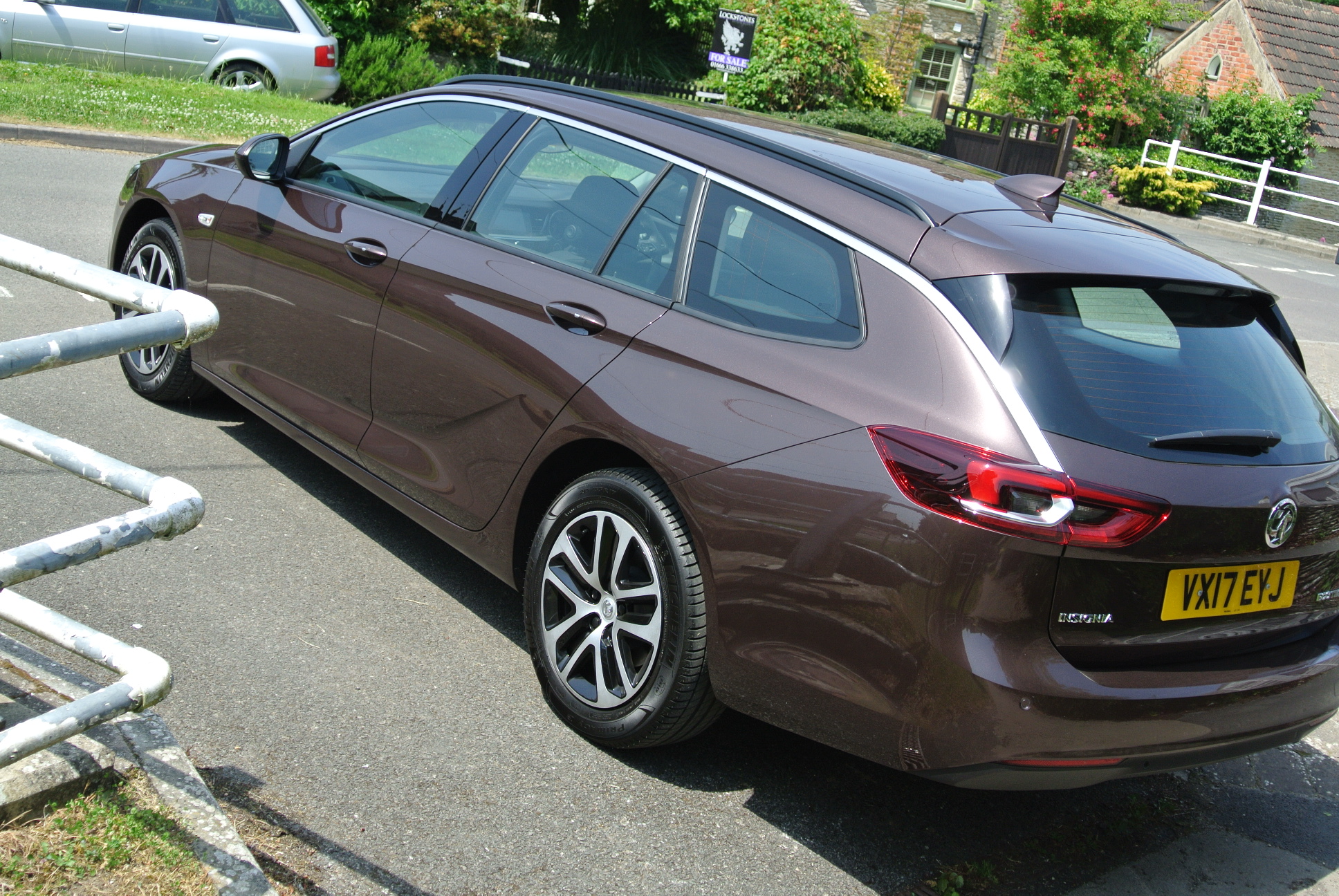 In either case, petrol, or diesel, the new Grand Sport Insignia Tourer provides a first-class driving experience, with lovely long-legged gearing, exceptional refinement and large car comfort levels. The detail finish is first-class and practicality levels are high. Whether acquired for use as a business car, which will account for upwards of 90% of all registrations of the GS-T, or for the private load-lugger, this is a car that will satisfy in every respect. Well, I could find no fault with it.

Vauxhall has served up a fine, business-like concoction with its Grand Sport Tourer version of the Insignia. Effortlessly good-looking, largely understated, yet eminently practical, it is a model range that sets a new benchmark for large family wagons. In typical Vauxhall form, there is a wide range of engine, gearbox, trim and optional extras to tailor the car to precise customer requirements.