HomeMonster MotorsIf Seat stands for ‘value’, the new Toledo should, too, but does not!

If Seat stands for ‘value’, the new Toledo should, too, but does not! 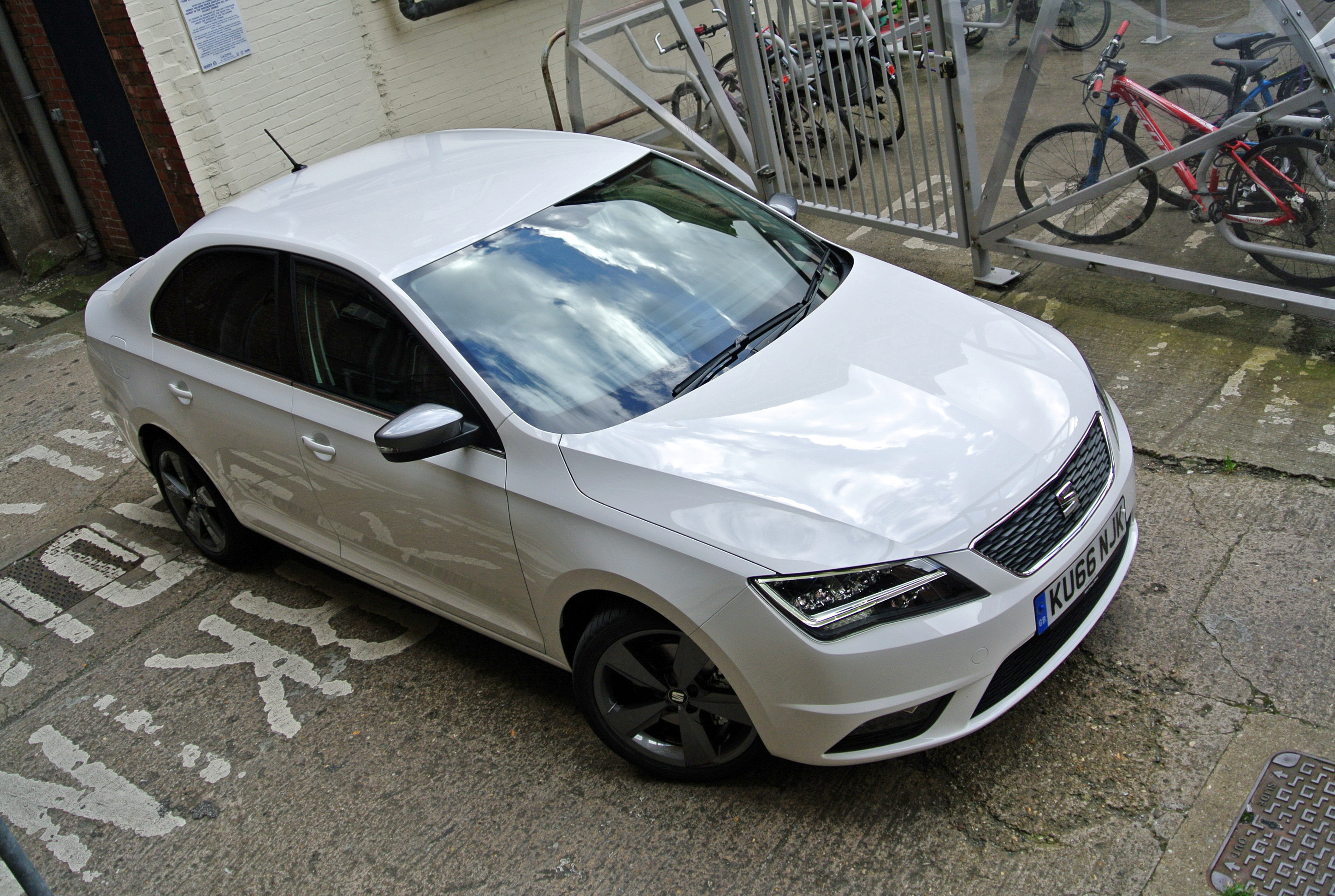 Whether buying, or renting, a value brand of motorcar, the last aspect you want to deal with is a sky-high price tag and, states Iain Robertson, Seat puts a lot of consumer goodwill at stake, if it does not take some extra care.

It all depends on how you view certain motorcar brands. In general terms, Ford Motor Company is perceived as the ‘everyman machine’, while Honda is still regarded as a ‘technological pioneer’. Kia, Hyundai and Skoda were once regarded as ‘budget brands’, while Dacia is undoubtedly at ‘entry level’ and perceptions are not high at all.

Meanwhile, Jaguar is regarded as ‘traditional’, while Mercedes-Benz, BMW and Audi are all classified as ‘premium’, which means that the buyer can expect to pay through the nose for his next mode of transport from any of them. Volvo and, to a similar extent, Saab (when it existed) were Swedish and intrinsically ‘safety’ orientated. Yet, Porsche, Ferrari and Lamborghini are all classified as ‘high performance’, leaving Rolls-Royce and Bentley to bring up the ‘money-no-object/prestige’ combatants.

However, many of these perceptions conceal blatant lies. Personally, I regard Volkswagen as providing the ‘ultimate quality at a moderate price’, while Audi is certainly impressive but shares so much of its owner’s DNA that it might be referred to more logically as an over-priced Skoda, which is not to suggest that the Czech brand is anything but significantly better than most perceptions have it. Honda has not been in the technological forefront since its owner, Soichiro Honda, passed away in the early-1990s, which means that it is over 25 years out of step with the rest of the industry. Let’s face it, Ford is actually more of a parts-bin specialist than any other manufacturer, so it has managed to pull the wool over consumers’ eyes for the best part of the past 56 years. 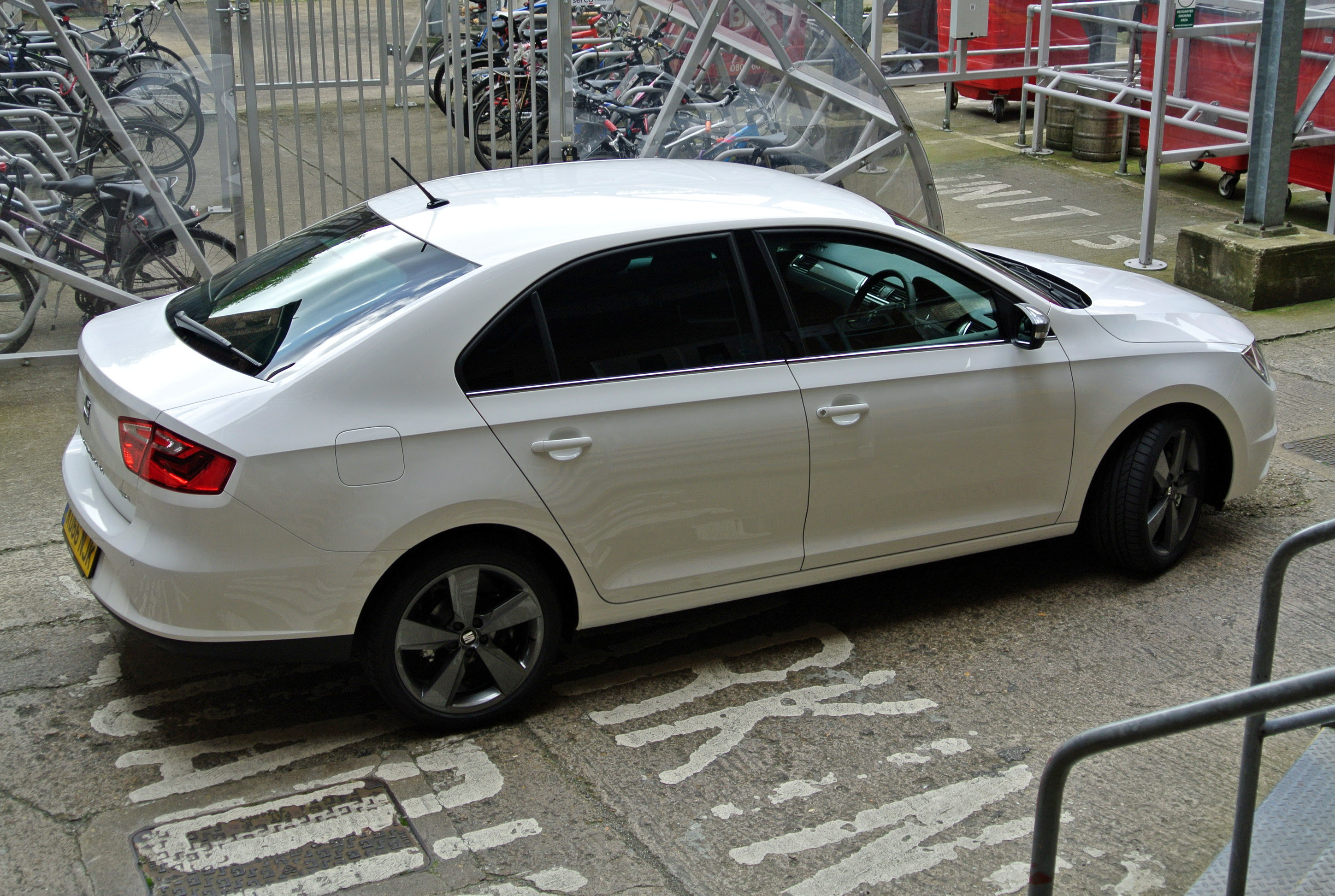 Seat was a troubled, almost strictly Spanish player (apart from a few feeble attempts by Fiat to market the Seat 133 in the UK, when it ‘owned’ the company in partnership with the Spanish government/dictatorship), prior to the Great Saviour that is VW Group taking over its reins in the early-1980s. While its first attempts to produce marketable products relied on a mish-mash of VW and Fiat parts, which was never a great starting point for a ‘new’ company, the brand made a teensy dent in its formative, pan-European years.

By the early-1990s, there was a radically different solution on the blocks. VW platforms created a raft of new models but the Seat company was still being treated like a corporate toy, one moment being relegated to providing a ‘budget’ class of motorcar, next being allied Audi, only to leave Skoda, another of the VW adoptees, out on a limb. More recently, the parent Group sought to sell off Seat’s assets to a rival (Alfa Romeo had been mentioned) but whether clinging onto the wreckage, or not, it remains part of the VW Group for the moment, even though the Group has been experiencing well-publicised, major international issues of its own.

Regardless of both internal wrangling and external perceptions, I have always regarded Seat as a ‘value brand’, which made this test example, a Toledo Style 1.6TDi somewhat less of a bargain than I had anticipated, priced at £21,135 (including options). As a result, I can only presume that VW Group, Seat’s parent and the company at which the finger of blame needs to be pointed, has been over-pricing ALL of its many models quite noticeably over the past two to three years. The pretext has been of increased manufacturing costs, even though actual inflation has been at comfortably low levels, as a means to fund the exorbitant legal fees it has incurred over the ‘emissions cheat device’ malarkey. Well, that is pretty rich! Getting the consumer to pay for a corporation’s fines…perhaps it is not just the banking fraternity that needs a rap across the knuckles?

Hardly the most popular model in Seat’s line-up, the Toledo is a brand name that has been shoved from a large-booted, Golf-platformed, medium sector contender, to a slightly less than flattering MPV/crossover model and now this most recent iteration. It is no longer based on the Golf. In fact, its relationship with the smaller Skoda Fabia and Seat Ibiza, while a little confused, is somewhat closer than its dimensions might suggest. Skoda does offer a badge-engineered rival in the form of the Rapid. However, it is truly somewhat better than just a chunkier Seat/Skoda compact…while retaining the remit of an utterly immense boot, beneath its wide-opening hatchback. Powered by a 1.6-litre turbo-diesel engine that develops 112bhp, it is blessed with typical diesel mid-range verve, although it is not the finest engine in the VW range. Yet, it is exceedingly frugal and, while its posted 72.4mpg might be a tad optimistic, I returned around 64mpg just pottering about Lincolnshire. Despite its sporty and most attractive, optional, 5-spoke, 17-inch alloy wheels (£350 extra, as part of a Titanium Pack), Toledo is not a car that either responds well to being pushed hard, nor even encourages the driver to do so. Therefore, do not be surprised to find that ‘Blue Badge’-holders and users with equally ‘blue’ hairdos are the ultimate end-users.

Emitting just 101g/km of CO2 (what a pity that this engine cannot be coaxed into a lesser zero-VED grade), the first year of road tax is free, with subsequent years costing a mere £20, until the rates change next April 1st. While not the most thrilling turn of performance, cracking the 0-60mph benchmark in just 9.7 seconds is more than speedy enough, as long as you can tolerate the sometimes jerky and cheap-feeling gearchange quality. The five-speed device works proficiently, if you do not rush it, and is leggy enough to make higher cruising speeds tolerable, all the way to the car’s reported 125mph top whack. 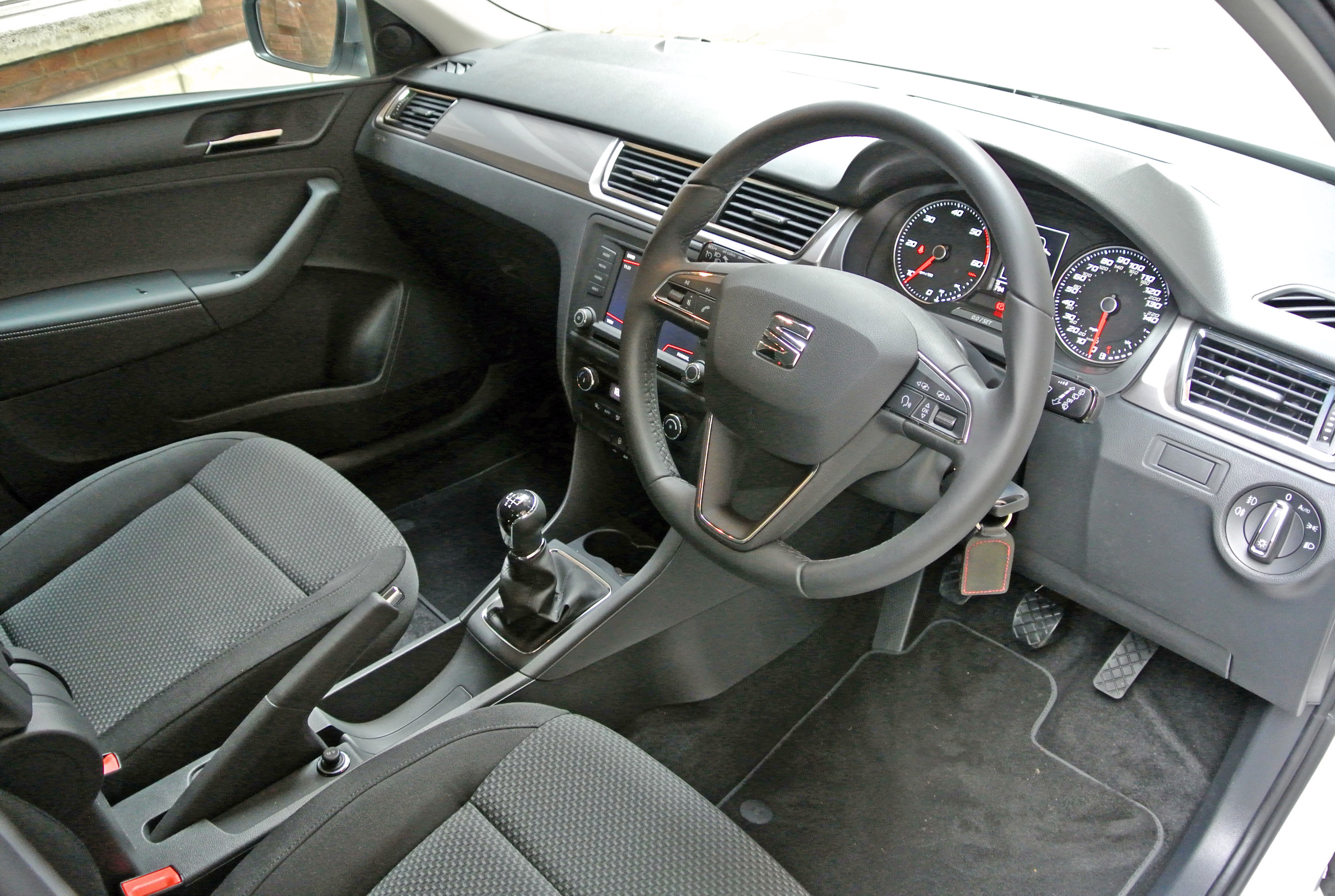 Where the Toledo really scores points is in its packaging. There is plenty of head and legroom in the front of the cabin, while the rear seats (complete with drop-down armrest) are equally spacious. In fact, a smaller, third occupant could be accommodated in the rear seats, if needed. Fold them forwards and the already immense boot space is increased by almost as much again. There is only a small, over-bumper lift needed to get items into that well-proportioned space, which does not suffer from excess wheel-arch intrusion, another significant benefit, and the tailgate lifts high enough out of the way to avoid incurring cranial damage but not so high that you might struggle to lower it again.

While the Toledo’s cockpit does look as though it has emerged from the usual Volkswagen mould, mould is the operative word and expanses of moulded plastic, not of the highest quality or tactility, it needs to be said, cover the dashboard, door cards and centre console. As a result, the interior possesses a distinctively low-rent, brittle appeal, which might be described as either (unfairly) an expected VW Group ‘con’, or (more reasonably) a penny-pinching means by which this particular model can still lean on its original ‘value brand’ tag. I believe that VW is making Seat short-change its Toledo customers, because ‘slush-moulded’ technology that creates soft-touch and tactile trim surfaces, is a VW invention and, because it uses recycled plastics (in the main) to formulate the finished panels, there is no earthly reason not to allow Toledo to comply with a more up-market finish. I do believe that it affects sales potential. 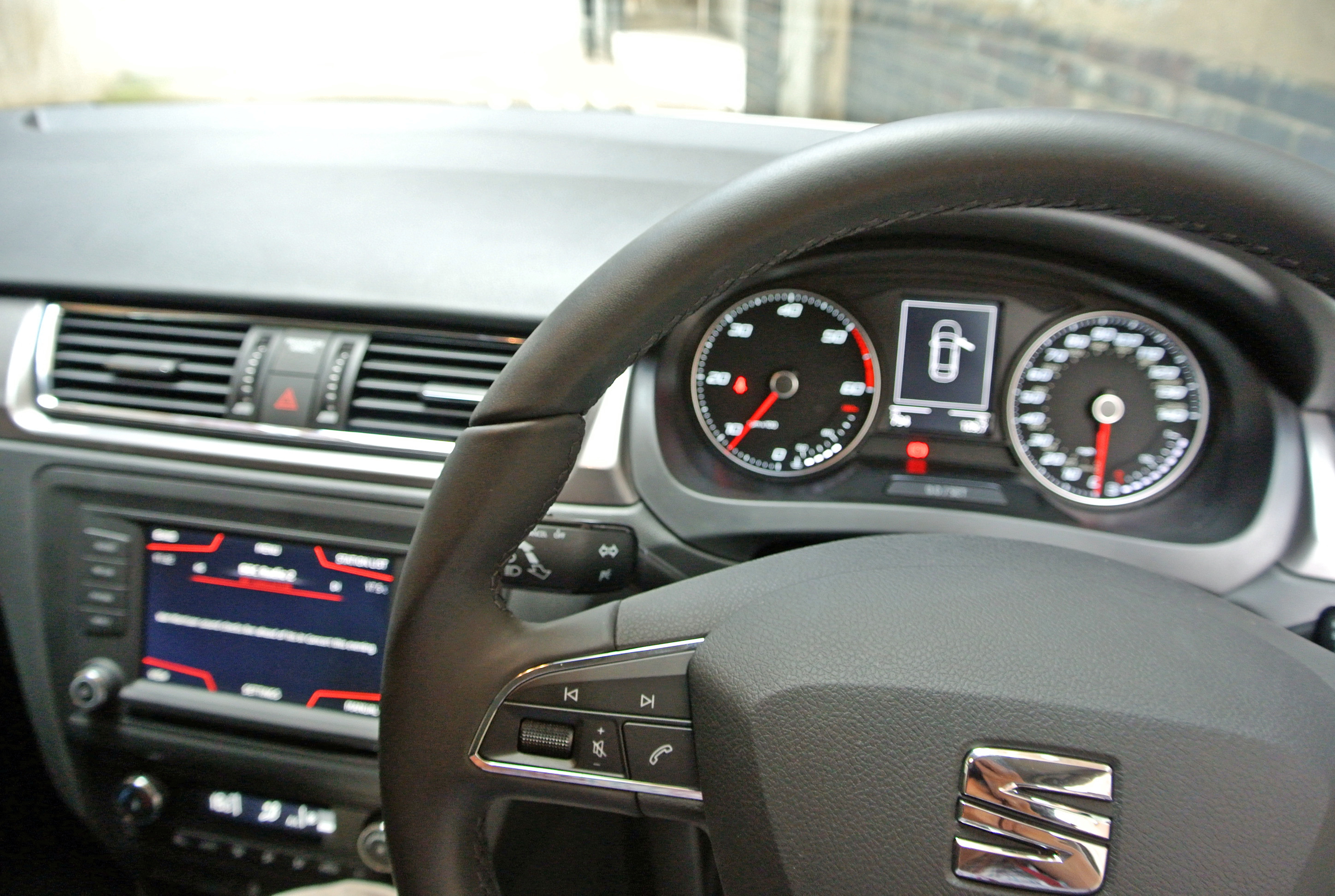 Yet, the dashboard is exceptionally well-stocked, as (at £210 extra cost) it includes auto-on lamps and wipers, as well as a self-dimming rearview mirror. The test Toledo also includes (at £150 extra) the Full Link media pack, which incorporates sat-nav, on-board computer and other useful features, while enabling ‘Mirror-Link’ for android mobiles, as well as Apple CarPlay. It is worth highlighting that this Toledo also features the full, automatic LED head and tail-lamp array (for £1,025), cruise control and air-con. It is well-equipped, which helps its cause but, remember, it still costs well over £20,000, which is a lot of ackers for a model of this type.

It handles moderately well, even though its suspension is quite unsophisticated, and its brakes work efficiently. The ride quality is lacking a more satisfying and comfortable edge, although the pleasantly weighted power steering is sharp and responsive.

It would not take much to turn a Toledo into a near-Octavia beater and thus a serious business proposition, because it does possess a slight whiff, even though it is more implied than actual, of quality to it. However, the edginess of its overall dynamics are not at the higher end of the scale, which makes it feel as much ‘bargain basement’ as the loathsome Dacia. Personally, I believe the car to be around £3,000 too costly, despite its high level of equipment, although Seat dealers will talk decent discounts, just to rid their premises of Toledos. It is worth contemplating on that basis.