HomeMonster MotorsLacking the monster appeal of the original, the latest VW Beetle is hardly a no-hoper

Lacking the monster appeal of the original, the latest VW Beetle is hardly a no-hoper 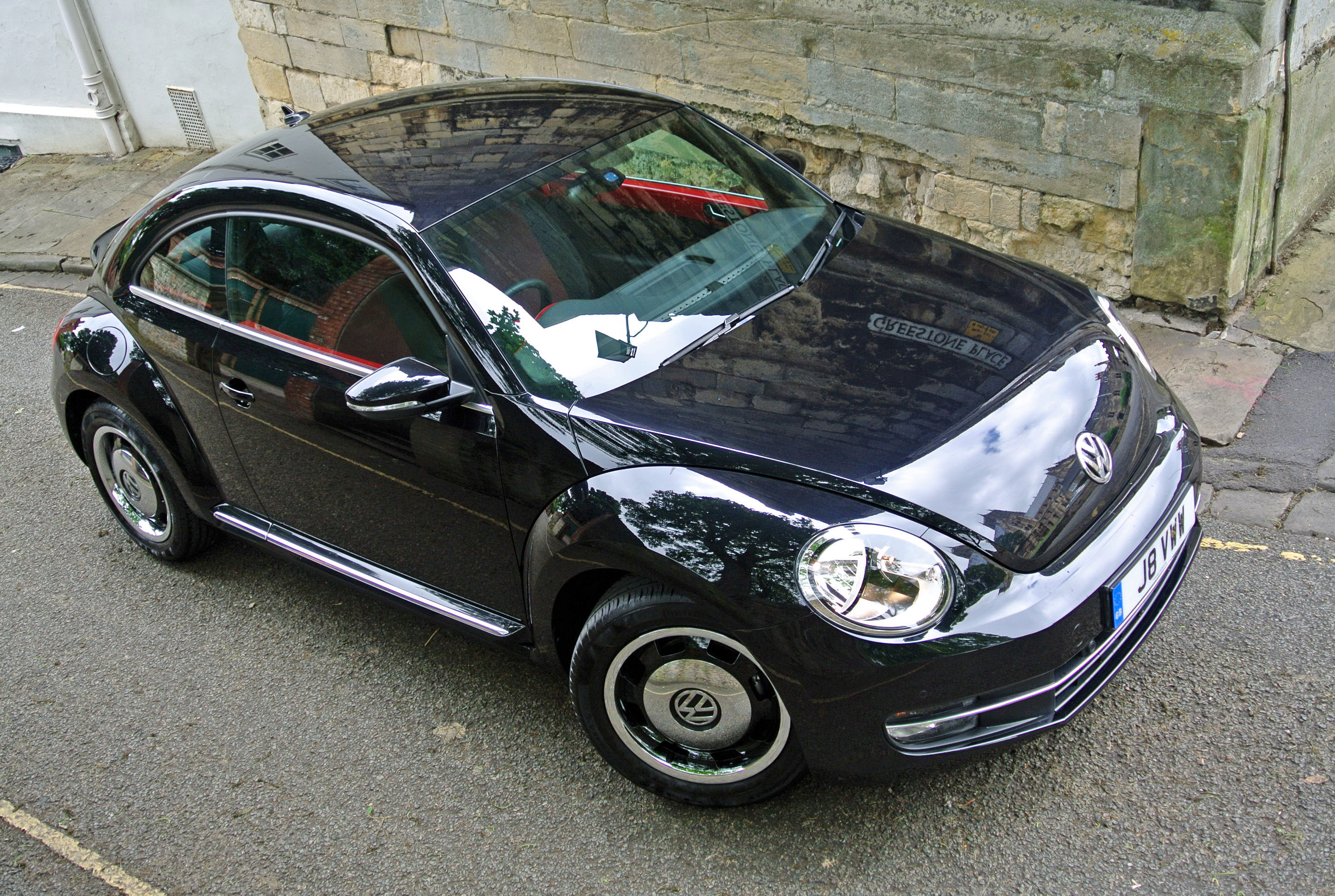 Many people like to impart a message with their choices of cars and Iain Robertson believes that Volkswagen serves purpose with the classical elegance and verve of its perfectly fresh retrospective model.

Finished in black, with a red interior, the latest version of the VW Beetle possesses a ‘film noir’ quality that would not look out of place, with a languorous Marlene Dietrich standing alongside it, shrouded in cigarette smoke, and a sinister Ray Milland just visible in the dank cast of a solitary Berlin street-light. While comic-book cars like the BMW Mini and the Chrysler PT Cruiser have come and gone in equal measure, the Mini looking quite frankly ludicrous in its latest engorged form, the motorcar scene, set on an SUV hunt instead, appears to have turned its back on ‘retrospective’. 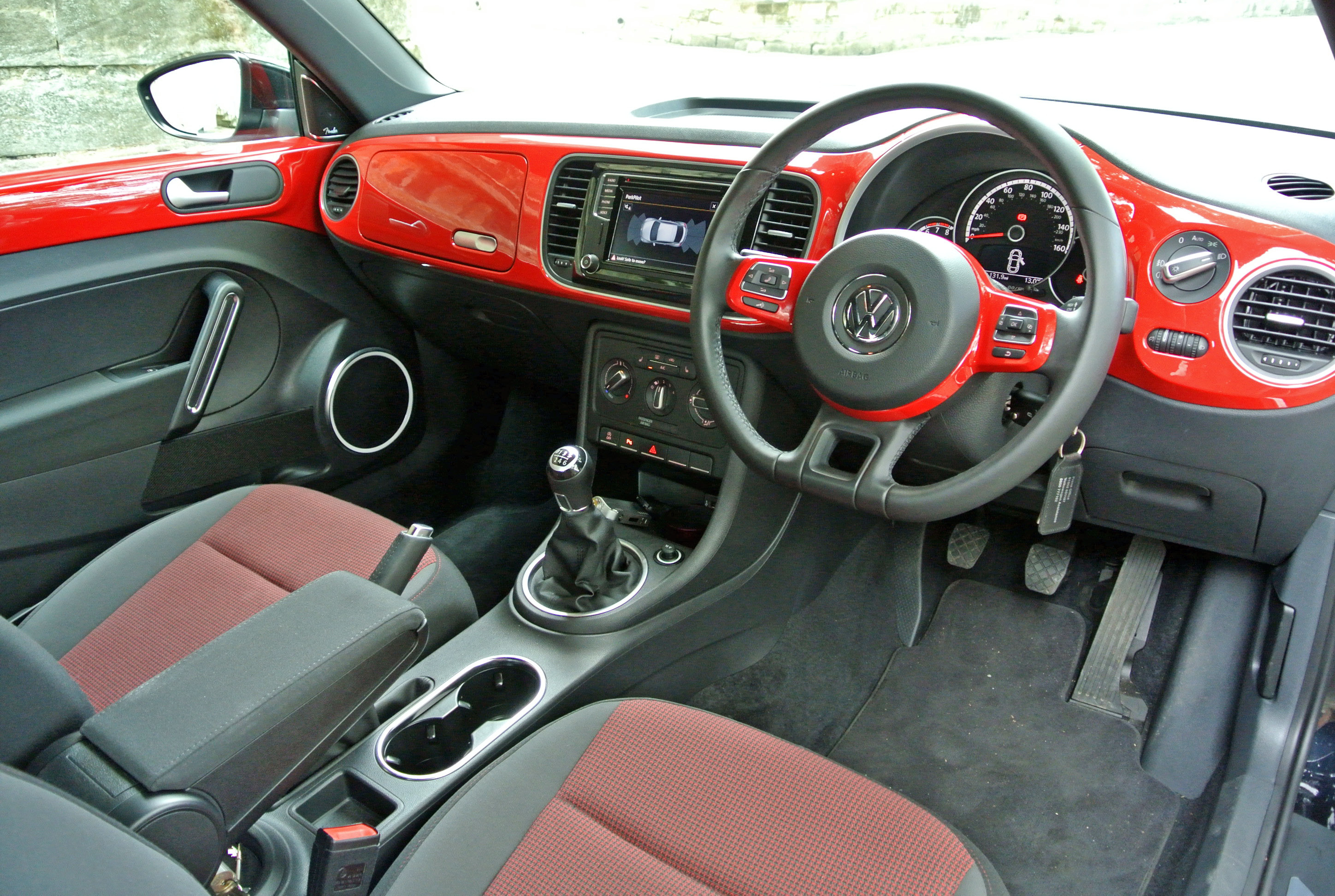 The ‘New Beetle’ was actually the first in breed, when its wheels took their first tentative roll in 1997. From a design team that included J Mays (soon to retire as VP of Design at Ford Motor Company) and Peter Schreyer (head of styling at Hyundai-Kia), the original Volkswagen Concept One, as the New Beetle would become, was an exercise in retro-futurism that neither of them believed would have any legs. It remained in production until 2011, boasting several ‘firsts’ during a moderately successful existence.

Emerging from the period that we can now look back upon and declare as ‘one of extremes and excess’, when other car companies were snaffling up rivals with rapacious vigour, next year will be the model’s 20th Anniversary, a factor that should underscore its worth and durability to VW Group, even though the ‘New’ soubriquet was removed from the range with the Mark Two model in 2011, it having been long enough since the original Beetle, the consummate ‘people’s car’, had ceased its multiple record-breaking production run from 1938 to 2003.

While VW was doing little more than underscoring its potency, when it unveiled the 1997 ‘New’ version, in a dazzling display of sequin-studded dangly parts (believe me, I was at that avant-garde and slightly terrifying Teutonic launch exercise, held in a circus tent on the front lawn of the company’s Wolfsburg headquarters, which might have outshone some of the wildest rock and roll parties of the 20th Century), the car was so clearly a ‘fad’. It had no real purpose in life, other than to give off the whiff of VW’s Hitler-linked past in a modern idiom. 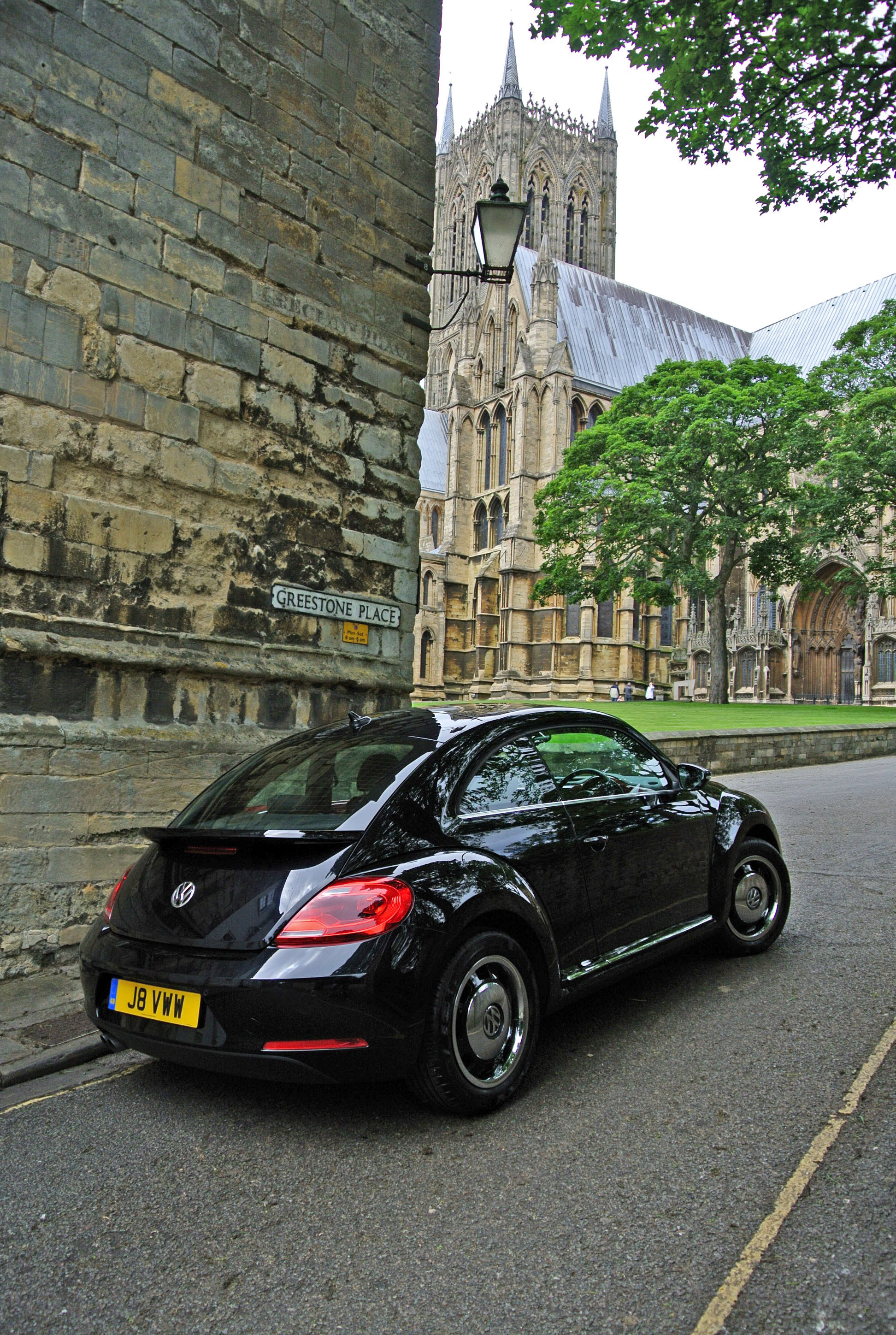 Despite the PR team talking-up the technology, the car actually possessed very little. Its front bumper assembly, one of the most complex, largest and costly mouldings that any of the world’s car firms had ever produced seemed to be the hinge around which flexed its oddly amidships driving position, 2+2 seating, front engine/front driven and teensy rear boot. It was also expensive, as a retail proposition, a situation that has reduced little with the latest iteration.

In every respect, the New Beetle was the ultimate, chest-puffing, self-aggrandisement project. Its dynamic qualities were fun but flawed and its Jimmy Durante conk, visible in a lateral elevation but which was so far ahead of the driver’s line of sight that contact with parking bollards, road width restrictors and even the end wall of the domestic garage were inevitable clashes that tested the integrity of that fat and costly bumper unit. Yet, some of us loved it for its daring-to-be.

While not unveiled with such a vainglorious fanfare, the Beetle that replaced it in 2011 was altogether more subtle, if anything, slightly more ‘retro’ than the ‘New’ version, not least in its colourways and detailing. Whereas the ‘Minster grotesque’ stance of the original had softened to a lower, wider and more masculine outline, it retained the Golf platform that underpinned the previous model. If nothing else, it demonstrates that Volkswagen’s platform sharing strategy is, without doubt, the greatest exemplar of motorcar corporate saving/profiteering in the world. As Carly Simon might trill, “Nobody Does It Better!”.

Thanks to higher levels of normality, although still slightly odd in its driving position, at least the passenger compartment has been moved further forwards in the frame, which means both space enhancements (in the rear seats and the boot) and dynamic characteristics have improved. Where the New Beetle was self-consciously hung-up by its past, the latest Beetle only gives it a nod-and-a-half. 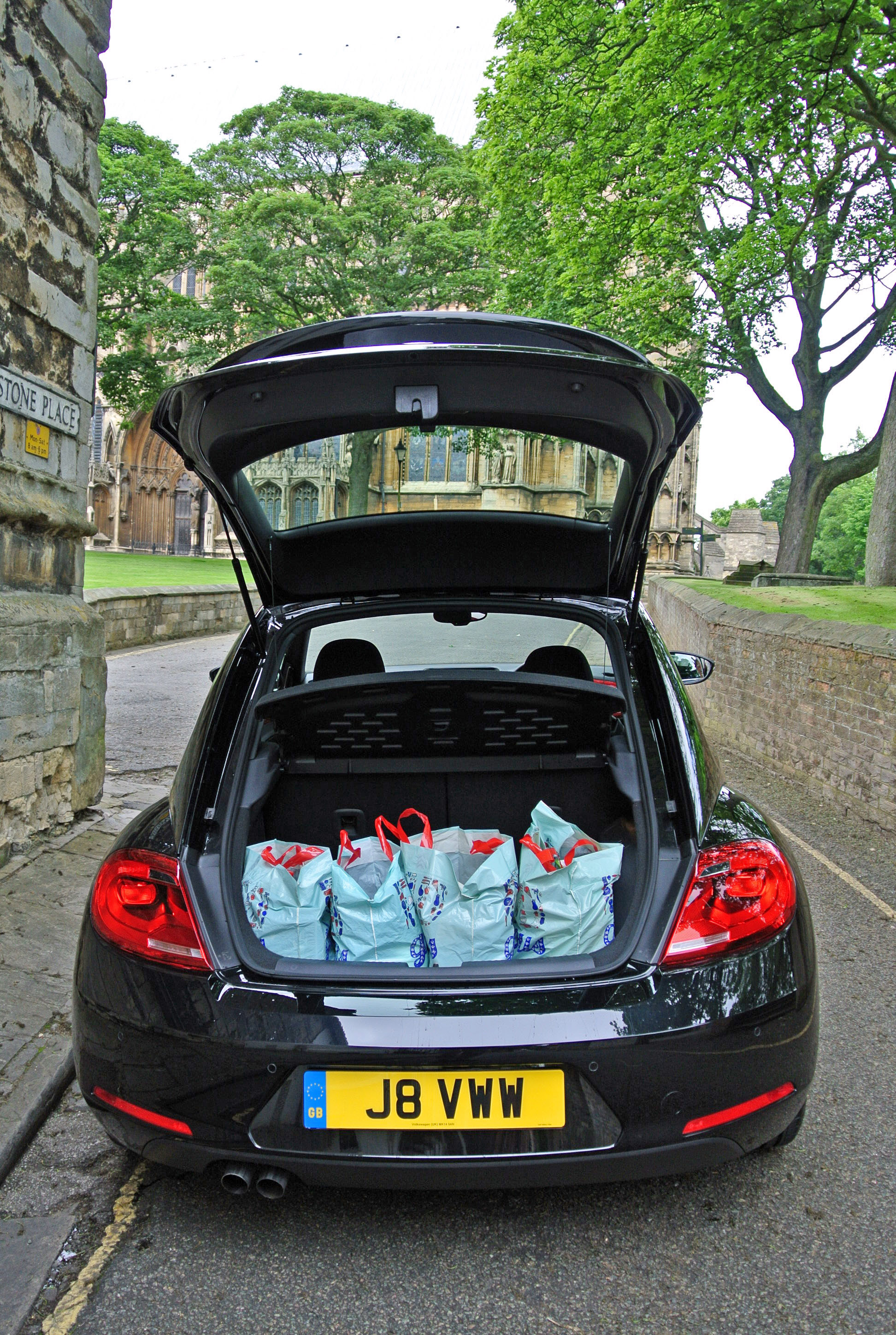 While the platform might not be the very latest MQB type, as used by several mainstream VW models, there is no difference in other aspects of the car’s engineering over its Golf donor. Despite all of the negative issues surrounding the firm’s unfortunate, if ingenious, diesel engine ‘emissions cheat device’, VW produces some of the best engine families and the TSi unit installed in the nose of this Beetle is a true gem.

Displacing 1.4-litres, it is turbocharged and produces a solid 147bhp, enough to gift the car with strong mid-range performance, a splendid 0-60mph time of 8.4 seconds and a top speed of 126mph. It emits 136g/km CO2, which equates to £130 for annual VED, and posts an Official Combined fuel return of 48.7mpg, a figure that is not just achievable but that can be exceeded by a truly careful driver. There have never been any issues with VW’s petrol engines. Mated to a slick, six-speed manual gearbox, progress can be best described as lively and, where the New Beetle’s handling might have been termed ‘slightly ponderous’, the latest version is as tight as a drum but not lacking in ride comfort.

There was a time when rudimentary runabouts possessing limited aspirations were simply disallowed from carrying around a plank of sapele wood, zebrano, or walnut, across the width of a minimalist dashboard. The original Beetle never did, although a few accessories firms offered the usual tasteless alternatives. At best, the top models offered a vinyl covering but the same paint as the exterior often covered the dash-panel. 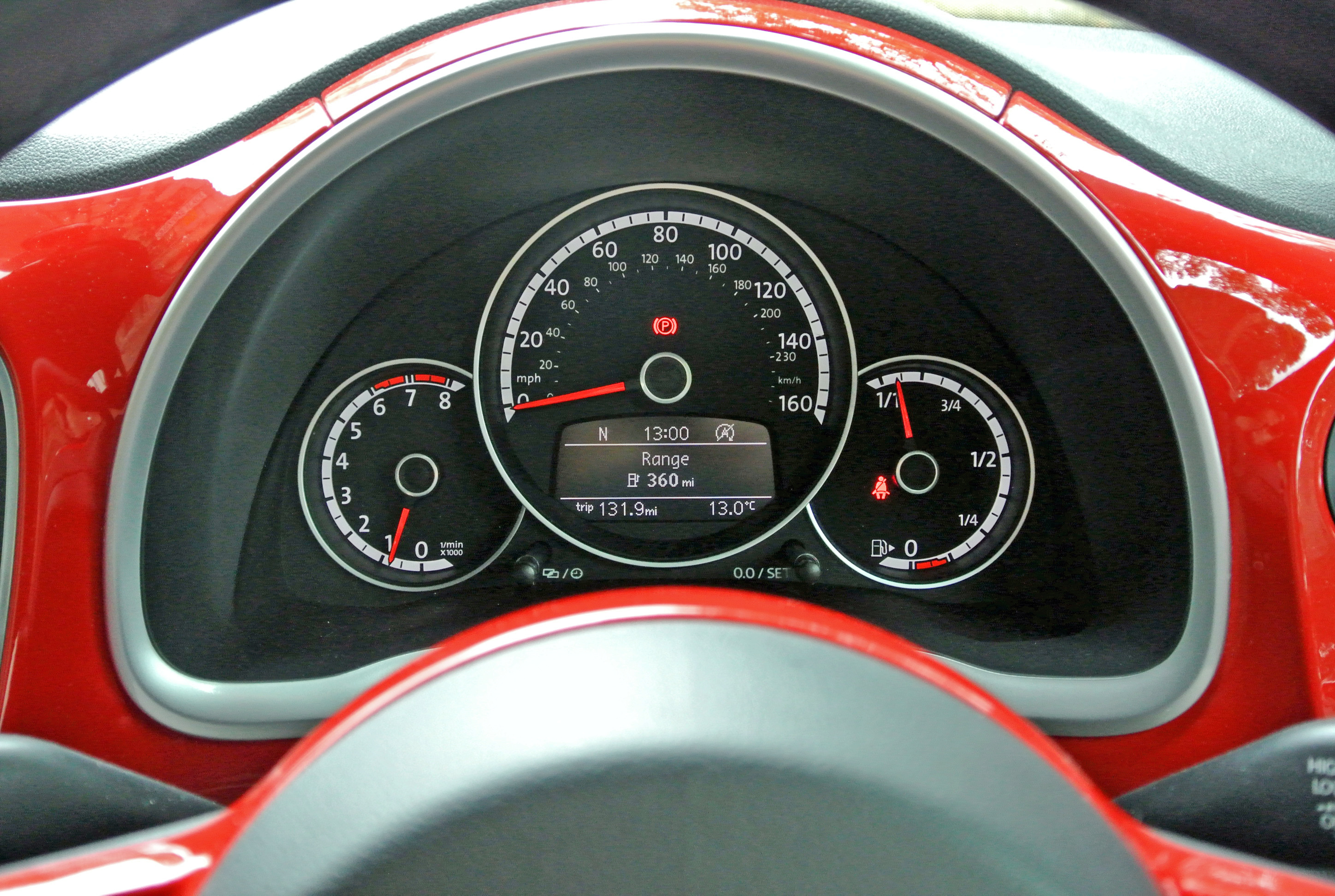 It was Fiat, who heralded back the exterior finish inside a car, with its Fiat Coupe of 1993; a styling nuance that was greatly welcomed, even produced from crash-resistant, Acrylonitrile Butadiene Styrene, or ABS, a thermoplastic polymer possessing an elastic, shiny and impervious surface, rather than painted pressed steel. Volkswagen took it on a few vital steps and, in the Beetle, it not only covers the dash-panel but also the tops of the door-cards that continue into the rear passenger compartment (for £95 extra cost). On the test car, the contrast between the funereal black exterior and warm, slightly tarty red interior is stark but entirely fitting with the car’s character.

In many ways, it takes the focus away from the brittle grey plastics that constitute the rest of the dashboard moulding, although there is plenty enough of it around the lower portions of the car’s interior trim. The same body-coloured trim adds detail to the cross-spokes of the steering wheel, behind which is the simplest of instrument clusters (only beaten by the VW Up! for entry-level splendour). There are no issues with clarity, the large speedometer being flanked by a smaller rev-counter to the left and a matching fuel tank contents gauge to the right, with a digital information display at the bottom, all of which harks back to the original Beetle and its minimalist proposition. 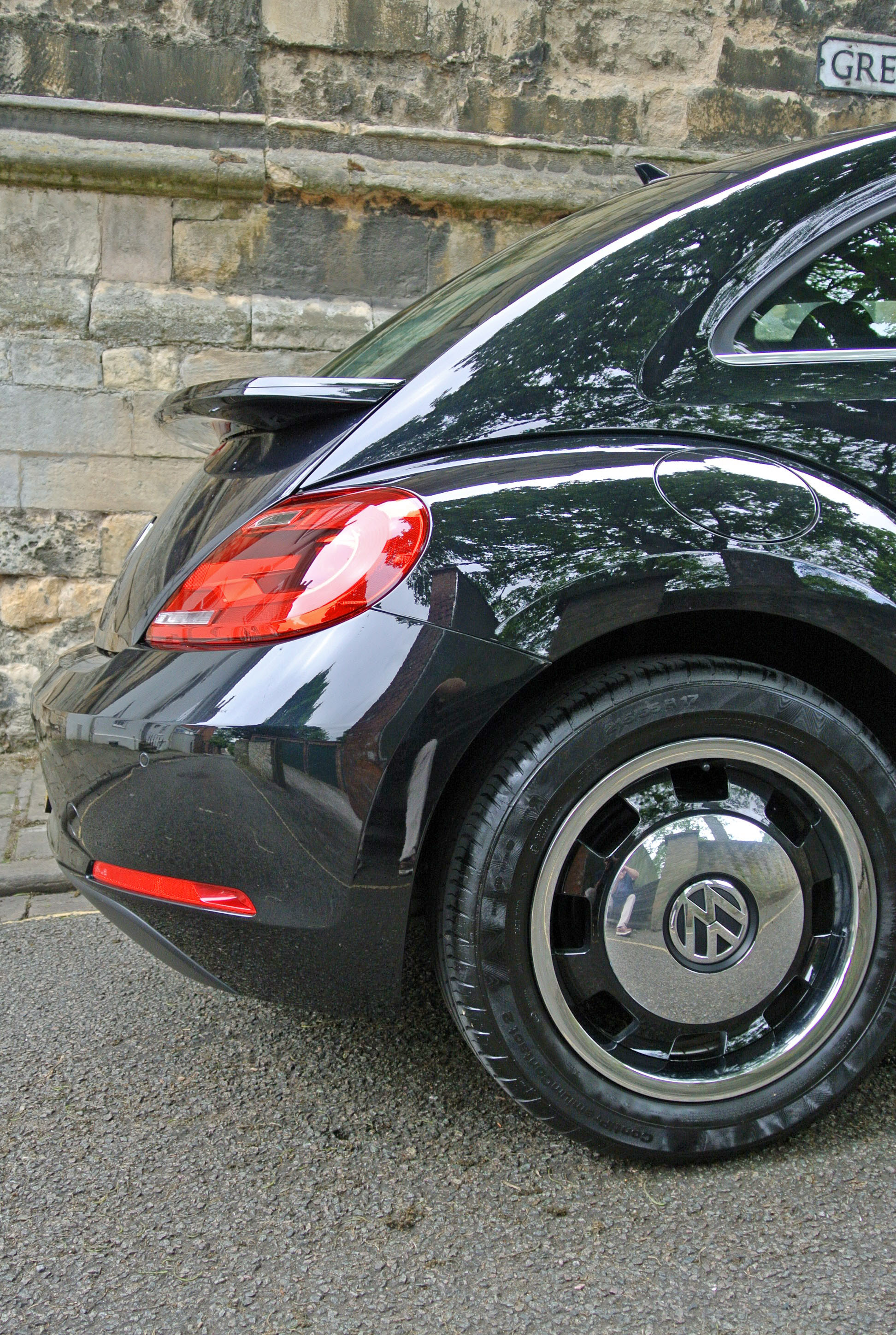 As it is a Volkswagen, you cannot escape the beneficial effects of modernity and the touch-screen in the centre of the dashboard (£665) provides a home for the sat-nav, the (£545) Panasonic-Fender 400W premium sound pack and the (£160) ‘MirrorLink’ smartphone connection. The visuals for the parking sensors (£375) fore and aft also appear on the screen. A rubber-lined tray sits in the top-centre of the dashboard, while there are plenty of storage slots, including one in the red panel, for in-car paraphernalia.

On the subject of ‘accessories’, the heated front seats and washer-jets cost £250, while the auto-dim rearview mirror, rain sensor for the wipers and dusk sensor for the lamps that also incorporate nocturnal parking illumination require £100 more. The alternative alloy wheel option that adds the elegant chrome-plated hubcaps and embellishers demands an extra £100. Remember that the black metallic paint finish weighs in at a hefty £545. Added together, they raise the invoice price of the Beetle from £20,185 to £23,775, as tested.

Do I think that the black Beetle is worth more than twice the price of the black Skoda Citigo I drive? No. Not really. Especially, when you take into account their spiritual bonding. Yet, pricing alone does not carry the value of the car. The Beetle, now that it has been part of our motoring landscape for the past 19 years, is eminently likeable in its latest form. It possesses oodles of character and is really good to drive. Okay. It lacks aspects of practicality and you would struggle to fit four people and their golf clubs in the car but it still makes a statement and now that it looks more manly, I would feel much more comfortable driving one regularly.