KYNREN – ‘people power’ in abundance at a must-attend outdoor show

Open air events are all the rage at present, from motor shows, to rock concerts, but Iain Robertson has attended a preview of an event for which he urges all right-minded people and their families to make time and it’s all about us…

Spectacular, splendiferous and stupendous, a show for all the family to enjoy and thrill to, an ‘Epic Tale of England’ has commenced its third season, from 30thJune to 17thSeptember, in world-beating and captivating style. Visitors to Kynren are granted an unmissable, colourful, illuminating and sonic explosion through a 90-minutes insight to British history, as witnessed by a young lad from the North-East of England. As far as outdoor and educative spectaculars go, Kynren has it all…an historical showpiece that involves, entices and inspires.

The amphitheatre, or ‘Tribune’, provides outdoor seating for an expectant audience of up to 8,000 visitors, in a valley below the ancient Chapel of Auckland Castle, Bishop Auckland, County Durham. The stage is as wide as the Tribune and as deep as greensward, lake and distant scenery can make it. It needs to be, to accommodate around 1,000 players, all of whom are volunteers from the local population, a factor recognised by the 2018 Queen’s Award for Voluntary Service. 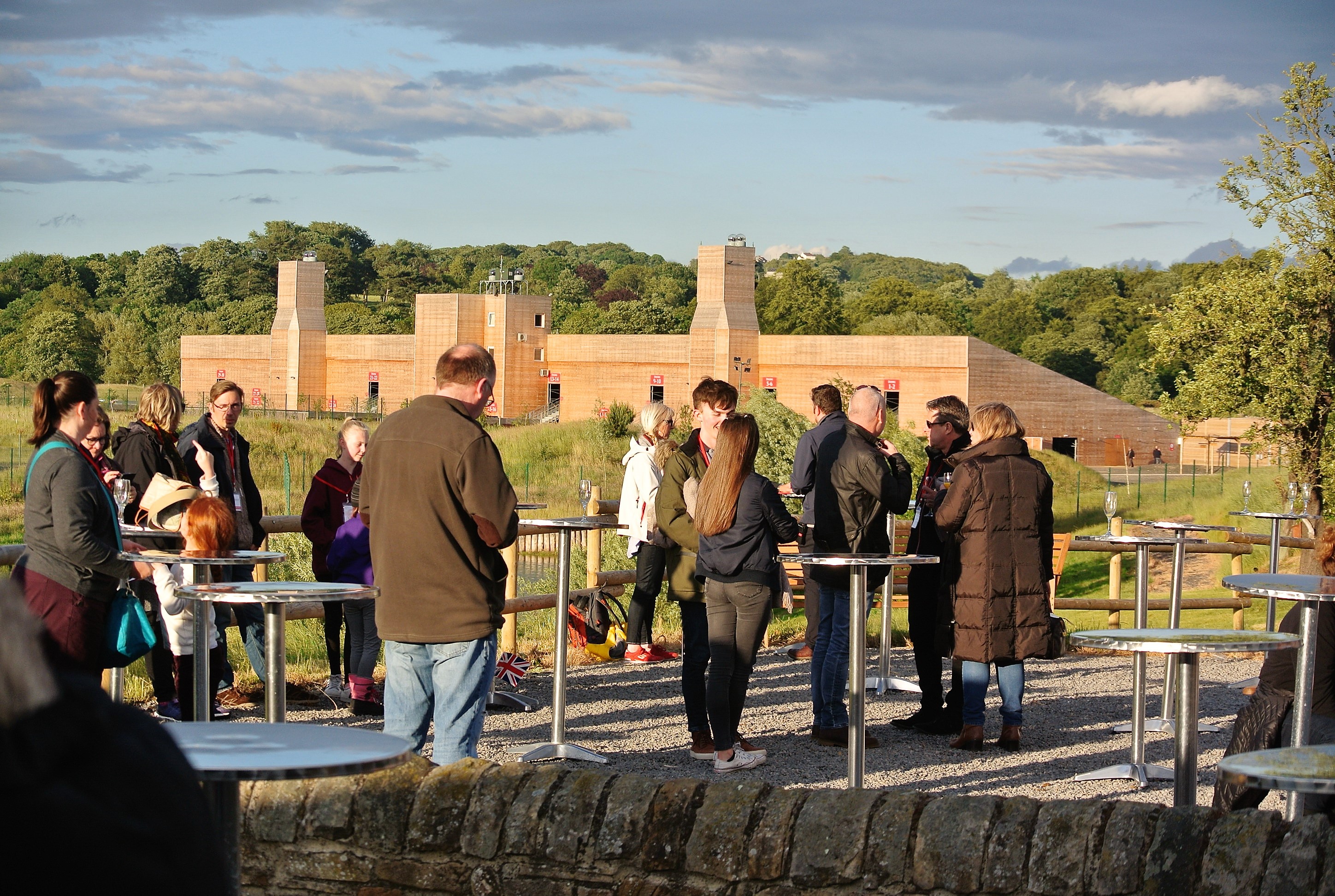 Commencing at 9.30pm, you need to keep your eyes open, as the spectacle unfurls to the beat of a specially composed soundtrack. Displays of incredible horsemanship, historically accurate costumes and the ingenious use of the immediate geography remind visitors of the opening ceremony of the 2012 London Olympics and not without good reason.

Known as ‘Archers’, the 1,000-strong cast and around 600, red-jacketed support personnel, are the magic that glues the spectacle together. No task seems too tough for any of them. Their warmth and selfless expressionism makes every performance grow and glow in glorious measure. As a prime example of extraordinary community spirit, every era, every major event of the past two Millennia, is brought together to highlight the story of us, an emotional roller-coaster that pinpoints the vital role of NE England in Great Britain’s history.

For just 17 performances between June and September, an entire community opens its arms and welcomes you to its sense of enormous pride. The backdrop alters, aided by projection, water and light displays, in a fast-changing but concisely scripted show, while the lake plays a central role, with smoke, fire and amazing props emerging dynamically from beneath its still surface. The ‘Wow!’ factor is substantial. 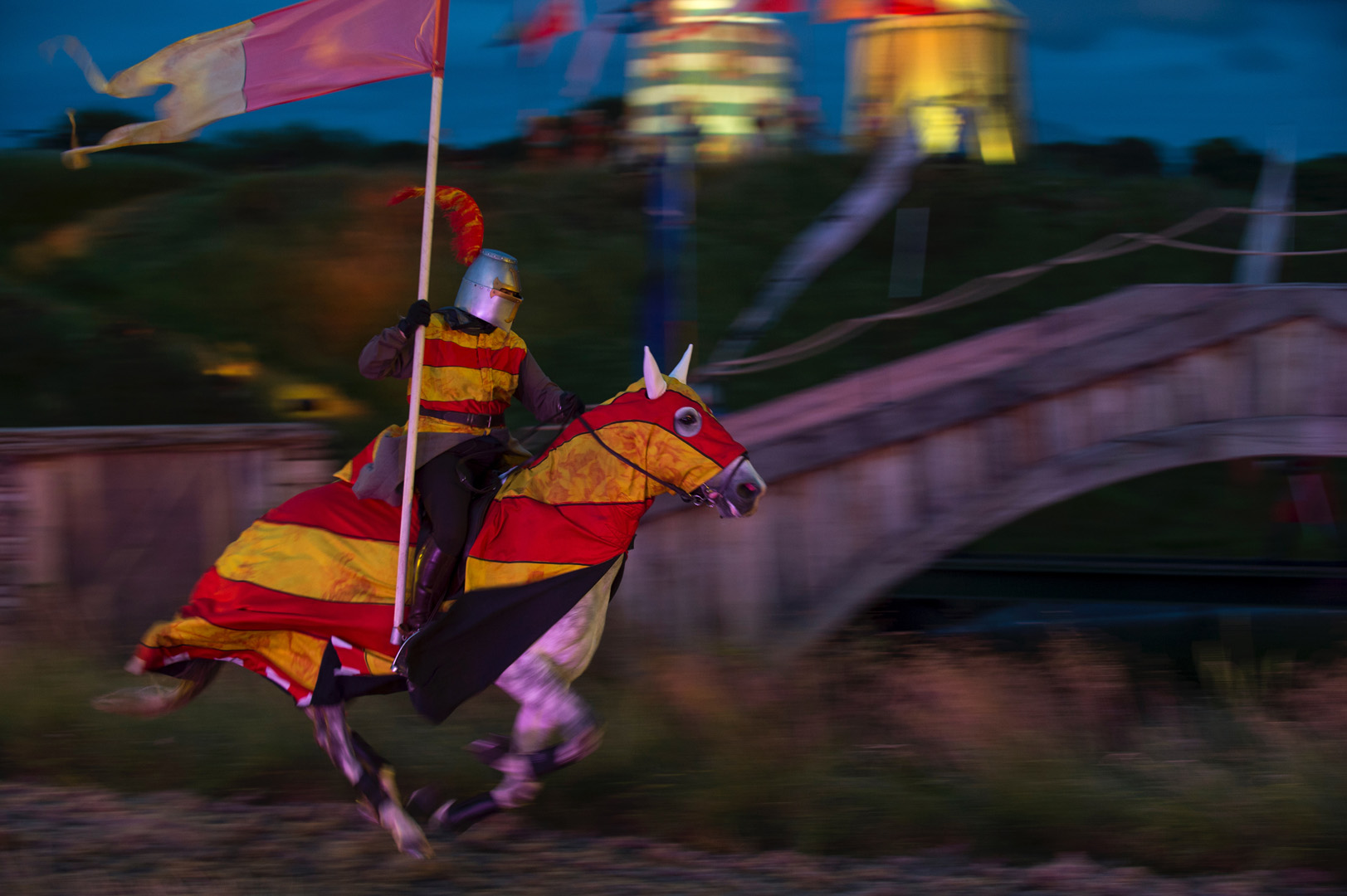 From Boudicca, to the Roman invasion, the arrival of the marauding Vikings, to the Norman Conquest, the drama unfurls, left, right and centre, in a pageant of colour and an introduction to the Prince Bishops of the region. Robert the Bruce and the Plantagenets share the stage and the Tudors are represented in all their finery, before Good Queen Bess sails majestically across the lake regaled by Shakespeare.

In the meantime, the central character, young Arthur, takes advantage of his time portal to progress through history. The livestock are well-behaved and from taking flocks of geese, herds of sheep and goats to market, the magnificent equine displays perform in Lipizzaner style, right before your eyes, seemingly enjoying the applause as much as any of the Archers. From festivals, to bloody battles, the adrenaline rush is unceasing, as the performance reaches an industrial climax, with smoke-belching chimneys and Stephenson’s ‘Locomotion’ coursing across the stage.

The importance of coal to the NE of England is not ignored but neither is disaster in the poignant memory of an industry that claimed the lives of many workers. Yet, spirits are uplifted by the Golden Jubilee of Queen Victoria and a magnificent carriage parade. By the same token, World Wars One and Two are remembered in reverential manner, the sacrificial effects of the first highlighted by the infamous Christmas truce of 1914 and a celebration of 100 years since the end of hostilities. Split by the golden age of the 1920s and 1930s and the arrival of Votes for Women, as well as the celebratory miners’ galas, the sound and light show of low-flying Spitfires accompanied by Churchill’s ‘Finest Hour’ speech lead into a Hope and Glory finale.

With all of the performers, aged from five to eighty years, on set, the fireworks show accompanies the light and water displays of dazzlingly brilliant Disneyland quality. The 90-minutes have passed by in a trice but the memories of outstanding choreography, impeccable showpieces and the almost unbelievable professionalism of an entirely voluntary cast will last forever. 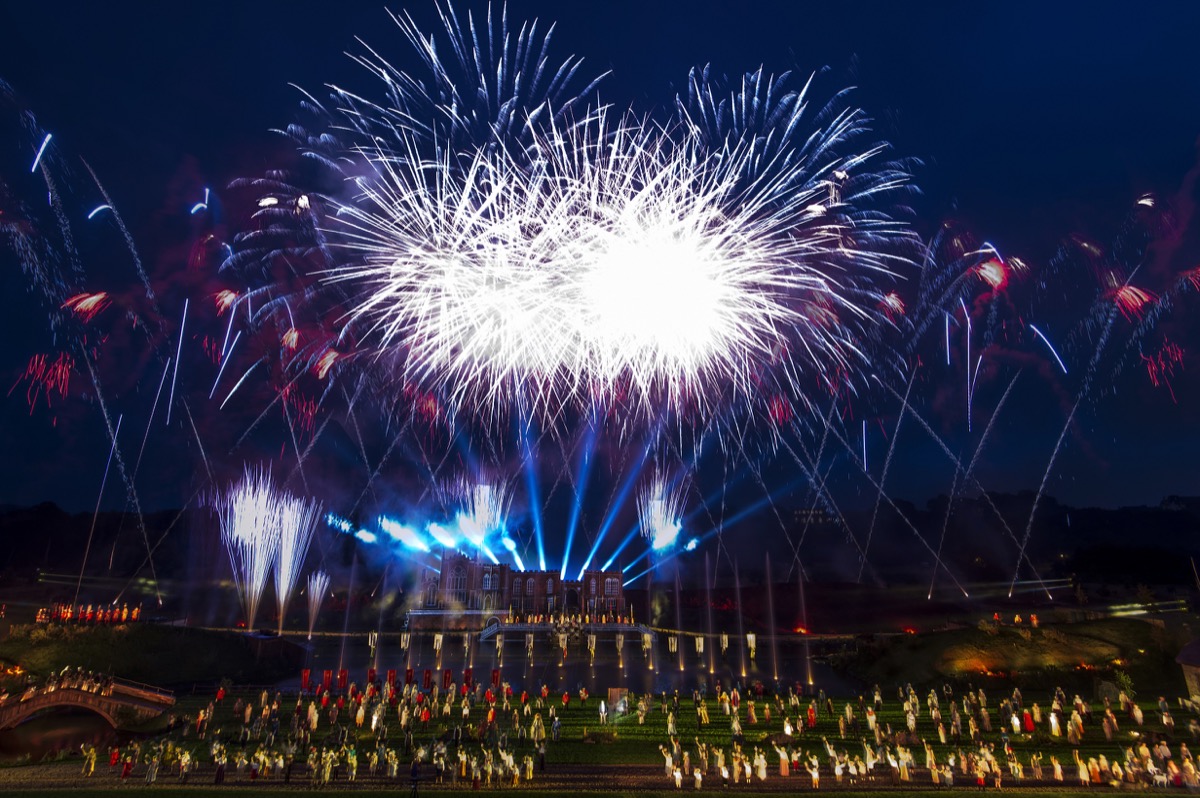 Eleven Arches is the registered charity behind every production of Kynren. Focused on community development, education and an innovative arts development programme, it has been the vision of local philanthropist and key investor, Jonathan Ruffer, to establish Bishop Auckland as an international tourist attraction. There are close similarities with the French Puy du Fou events. Yet, without the local history that makes this County Durham location so important, Kynren is a generational event about which all of us can feel proud. The sense of empowerment is all-encompassing.

As a sensory feast, while not wishing to diminish the magic of the performance, it is worthwhile knowing that there are two ‘villages’ set-up backstage, where the rigorously trained performers reside and, in near darkness, change costumes and exercise their many hours of rehearsals to perfection. The livestock, which include 37 sheep, two goats, two Durham oxen, two donkeys and a gaggle of over 30 geese are trained and maintained throughout the year at purpose-built stable-blocks that also provide homes to 33 magnificent horses, while costumiers maintain the outfits in readiness for successive performances.

Technical, safety, pyrotechnics and both lighting and sound specialists ensure the highest quality of seamless reproduction, with a team of divers operating unseen beneath the surface of the lake. Every element, from landscaping to sustainability is maintained at pristine standards, while marshals, security and medical teams provide active support.

If you only attend one outdoor event this year, then make it Kynren. Fans of British militaria over the centuries will find the show highly compelling. Adult ticket prices range from £25 to £59, £75 for a family of four, £12.50 for a seated child. You can book online (kynren.com), or telephone (0333-300-3028) for more details.