Convinced that only hands-on experience would enable a proper conclusion to be reached about Vauxhall’s innovative Intellilux headlamp option, Iain Robertson discovers that alloy wheels are also an important precursor.

Just a few weeks ago, I sampled the current sporty version (SRi) of the new Grand Sport in both 1.5i and 2.0TD forms. Both were most impressive. However, as I had been unable to attend the previous evening’s nocturnal driving experience, I was only able to mention briefly in my report the latest Intellilux headlamp development that is available on the new car for a modest £1,010. As a result, Vauxhall Motors was able to send me a different model featuring the lamps.

When I drove the Vauxhall Astra for the first time at night, my reaction to its optional 16-element (per side) Intellilux headlamps was a combination of amazement and mild concern. While their performance was astonishing, it was also little less than sorcery. Set to ‘automatic mode’, they appeared to read the road ahead, taking traffic conditions, roadside lighting, speed and other influences into account, all without incidental light scatter (a condition that wastes illumination energy) and, flexing between dipped and main beam settings, switching individual elements on and off as required, neither approached, nor oncoming vehicles were blinded.

Impressive as it was, my concerns surrounded the failure of individual elements within the lamp unit. After all, it is not unusual to see LED lamp failures on many vehicles, whether they be in the high-level rear brake-light assembly, or in the daytime running-lamps up-front, an occurrence that is not always model age dependent. The problem is, if one element of the 16-per-side Astra unit fails, the on-cost for making the car road-legal again could be just shy of £1,000. 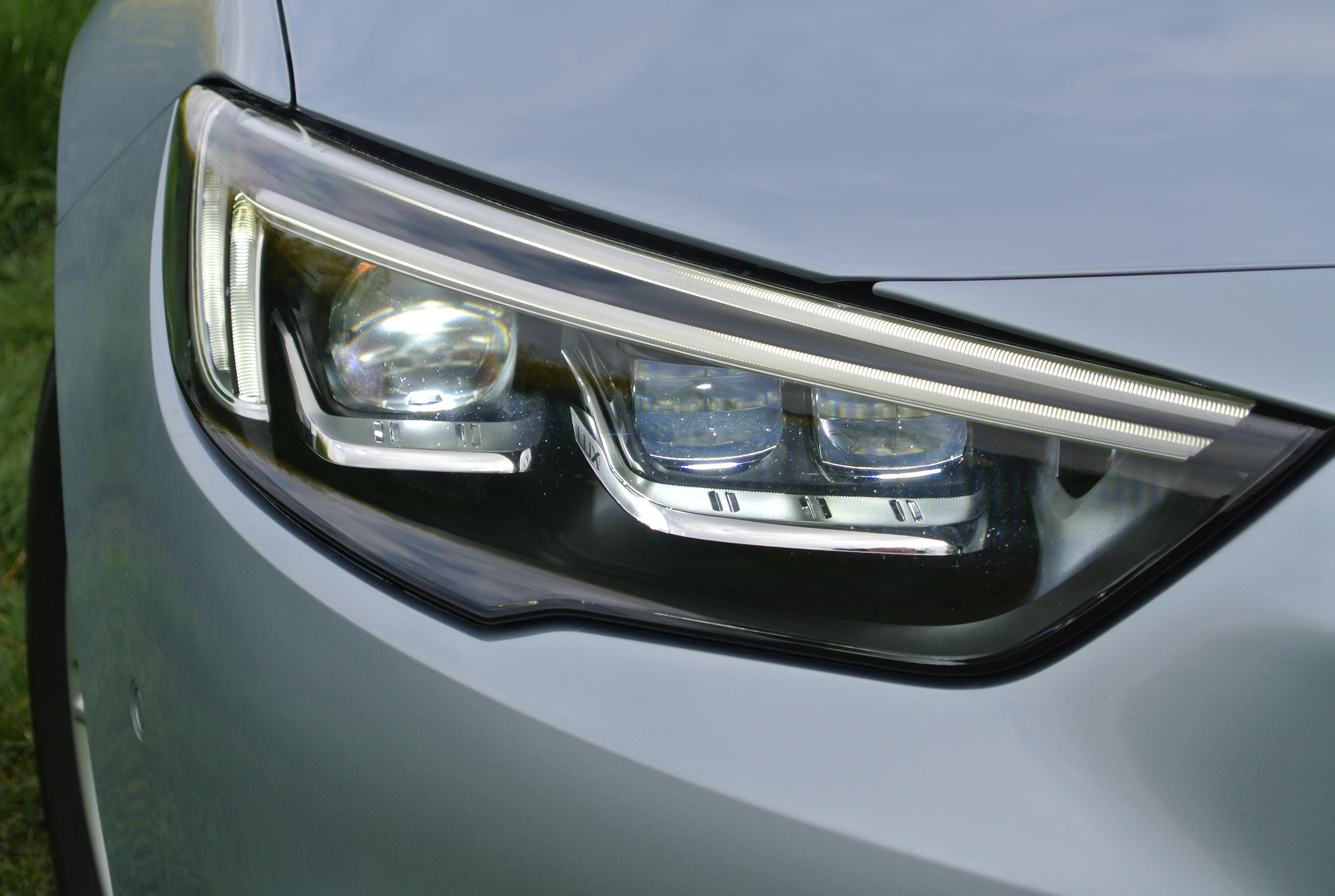 While the cost implication is amortised, when you appreciate that a replacement HID lamp unit can be priced similarly, even though a regular filament halogen bulb costs typically around £15 and a basic headlamp unit can be around £115, post-accident repairs are going to make insurance premiums even heftier than they are. It is an aspect worth contemplating, when ticking the various option boxes on a new Vauxhall order form. An additional issue lies in the fact that the unit prices are unlikely to reduce much in the future, even though consumer demand might increase. Yet, having gained the experience with the Astra model, I felt no qualms in suggesting that Intellilux is as important a safety feature as seatbelts fitted to cars.

Wind forwards several months to the latest Insignia Grand Sport, in which the Intellilux system has doubled its performance potential, with 32-per-side, individually motorised and reactive LED headlamp elements and you might begin to sense my mild apprehension. Within those stylishly slim and expensive housings there is a lot going on and, when you bear in mind that headlamps are under constant assault from natural elements (rain, snow, wind and temperature fluctuations), let alone being bumped in every direction by the car’s suspension reacting to some grim road conditions, plus receiving minor knocks in parking incidents, that their complex machinations are expected to be reliable and durable is perhaps asking rather a lot.

Despite my assertion about them being a key safety feature, the very thought of  having to fork out around £1,000 should any aspect of Intellilux lighting fail is a clear switch-off, especially to company car fleet managers. As the majority of car dealerships close their doors at around 6.00pm, the opportunities to sample, or demonstrate Intellilux lighting are reduced significantly for around nine months of the year, which means that potential end-users have to rely on conceptual information imparted by ill-trained dealer staff, which is also a major turn-off.

However, in the hopes that my experiences with the system might imply some of the benefits, I spent two moderately productive night drives (between 11.00pm and 1.00am) attempting to replicate as many problem areas as possible. In general, the lamps work magically and impressively, providing a field of illumination, aided by the additional ‘floodlight’ per side that assures an amazing reach of bright white light up to around a third of a mile ahead of the car. 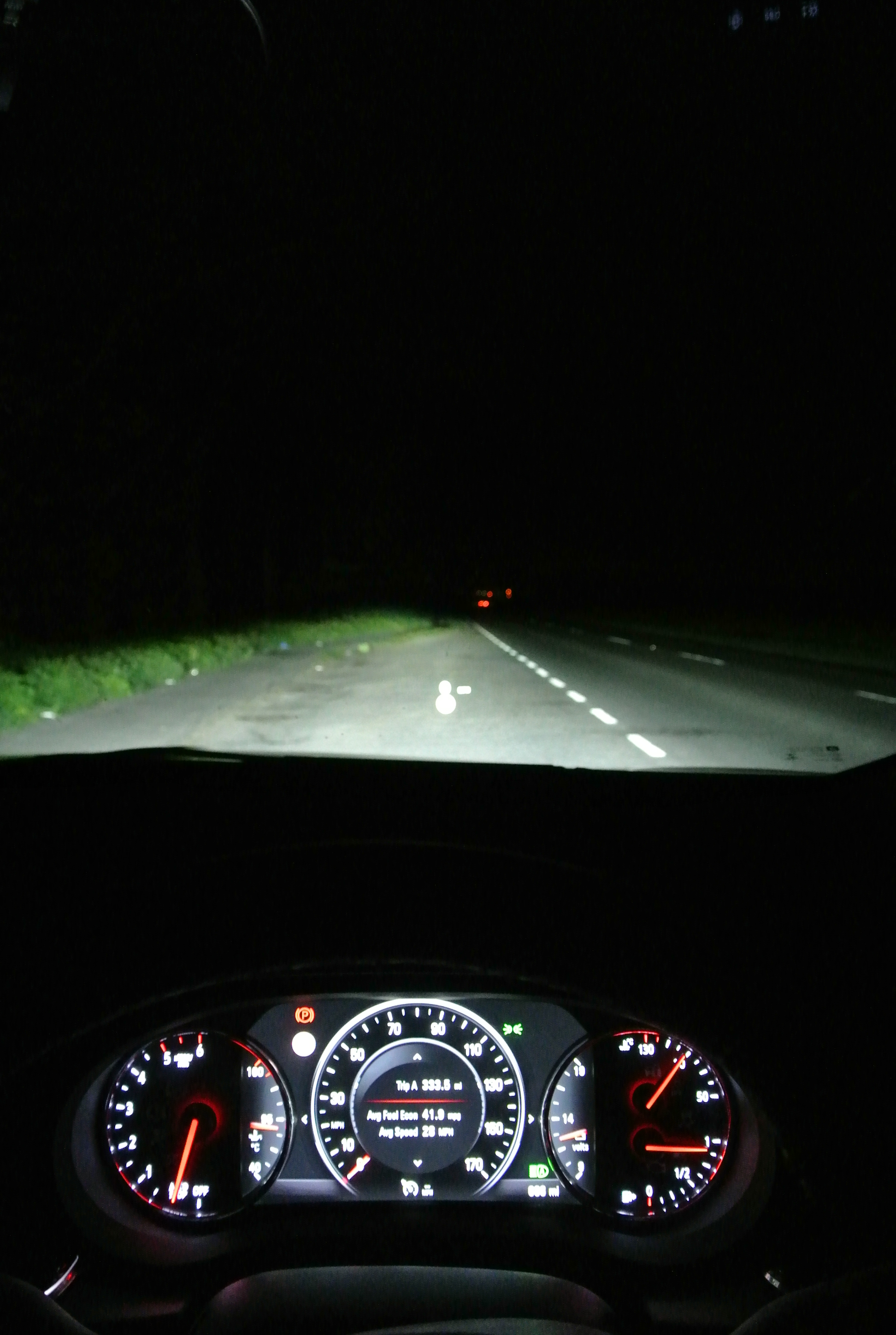 Yet, on both nights, with the lamps set on their ‘Automatic’ mode, I was flashed twice by oncoming cars, one driver of which was most agitated. While glare and light scatter is not a regular issue with Intellilux, it was clear that the intensity of light can sometimes upset oncoming traffic.

The operation of the lamps is speed dependent. As a result, the full array only works comprehensively once the vehicle speed exceeds 34mph (on the speedometer). Entering a built-up area, with street lighting, the lamps dim accordingly, which can make the discerning of pedestrian outlines difficult at times, although the pedestrian detection device also built into the test car did flash up a warning.

Passing a countryside industrial unit, complete with car park floodlighting, caused the lamps to be fooled into dipped mode, which was mildly disconcerting, as I was travelling at 60mph and would have appreciated full-beam instead. Yet, the system dipped a certain number of its elements for an approaching cyclist and the lit area behind vehicles ahead was never above boot level, even though either side of that vehicle was illuminated brightly. Therefore, I shall conclude that Intellilux, the first of its kind in an LED lighting era, is around 85% effective.

I am not a fan of LED lighting on cars. HID provides a far more dependable, safer and more confident range of illumination. Normal LEDs, as fitted to the latest Seat, BMW, Mercedes-Benz and Audi models (among many other new cars) provide excessive glare and insufficient definition. It is too easy for potential customers to be drawn into and allured by new lighting technology, sometimes with little choice…at least Intellilux remains as an optional extra. While I would still recommend the option of Intellilux, even with its stated limitations, I would urge customers to demand a personal demonstration first, before reaching their decision to have it fitted to their new Vauxhalls.

As to the rest of the Grand Sport, I feel it worth highlighting that the previous models I have driven were riding on 18-inch and larger diameter alloy wheels, which look great but pale into the ‘fail’ category, once you sample the car on 17-inch alloys. ‘L11 VXL’ (the test example) rides on 17-inchers and, even flicking through the three chassis deportment settings (Normal, Tour and Sport), the overall ride quality was utterly sublime, mechanical grip was first-class and the handling envelope of prime quality, so I would urge customers seeking drive experience fluency NOT to opt for the more style-centric larger diameter alternatives. 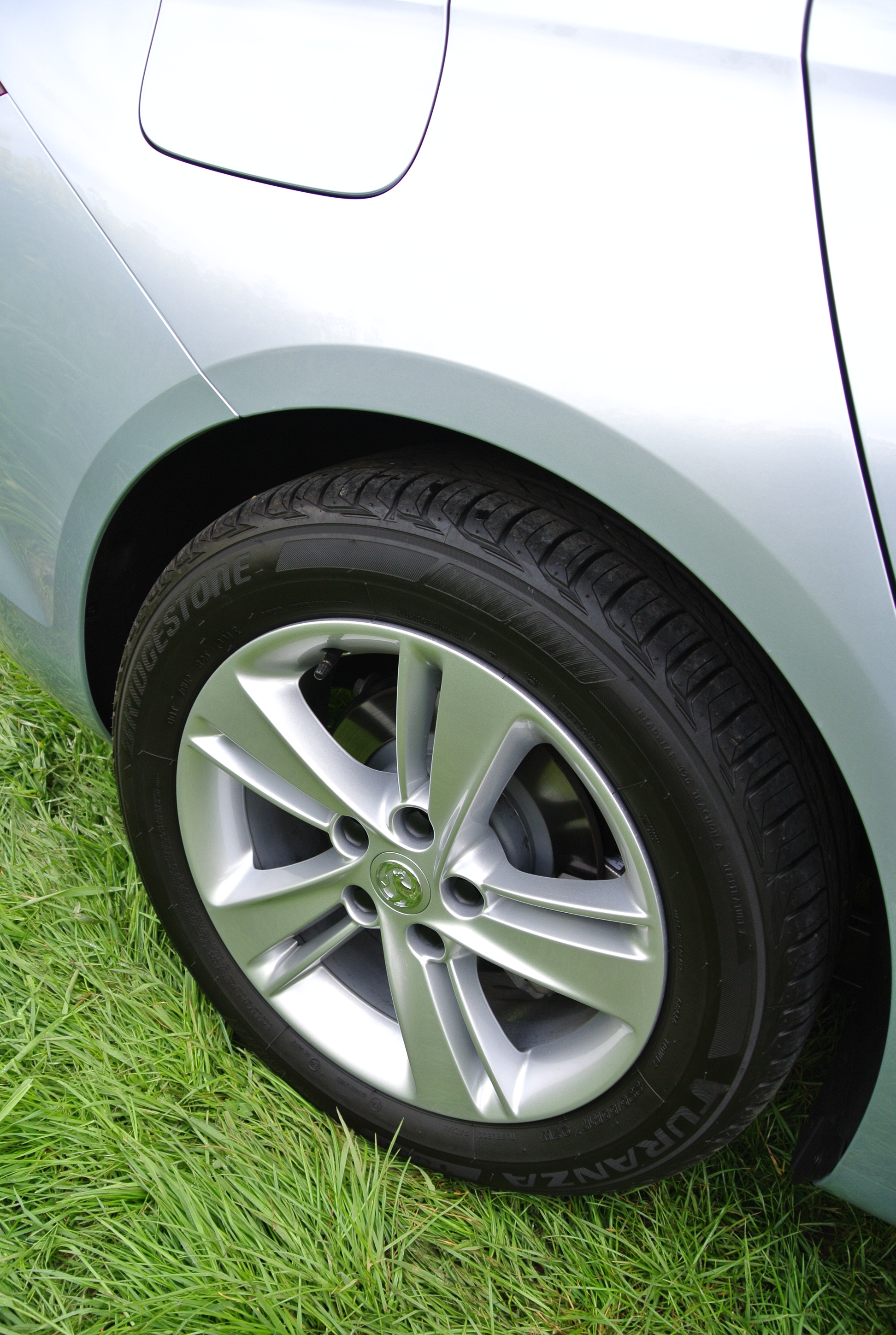 The 2.0-litre diesel propels the Grand Sport to a top speed of 140mph, despatching the 0-60mph sprint in a cool 8.2 seconds and returning around 50mpg, which is not bad for a near 5.0-metre long, spacious hatchback. Its most endearing quality is its fabulous handling, aided by the significant weight reduction inherent to all new Insignias.

Despite the fact that I was unable to obtain better photographs of the Grand Sport’s nocturnal lighting array (because to take them personally would have been illegal!), I hope that you can comprehend my enthusiasm for Intellilux. Above all, I really admire the Insignia Grand Sport. Its styling is cleverly derivative (you can see design cues from other manufacturers in it) but it retains its Vauxhall brand values, very few of which are questionable in any way and all of which are eminently in-line with private buyer aspirations.