HomeMonster MotorsFiat 124 Spider monsters with a trip down Memory Lane

Fiat 124 Spider monsters with a trip down Memory Lane 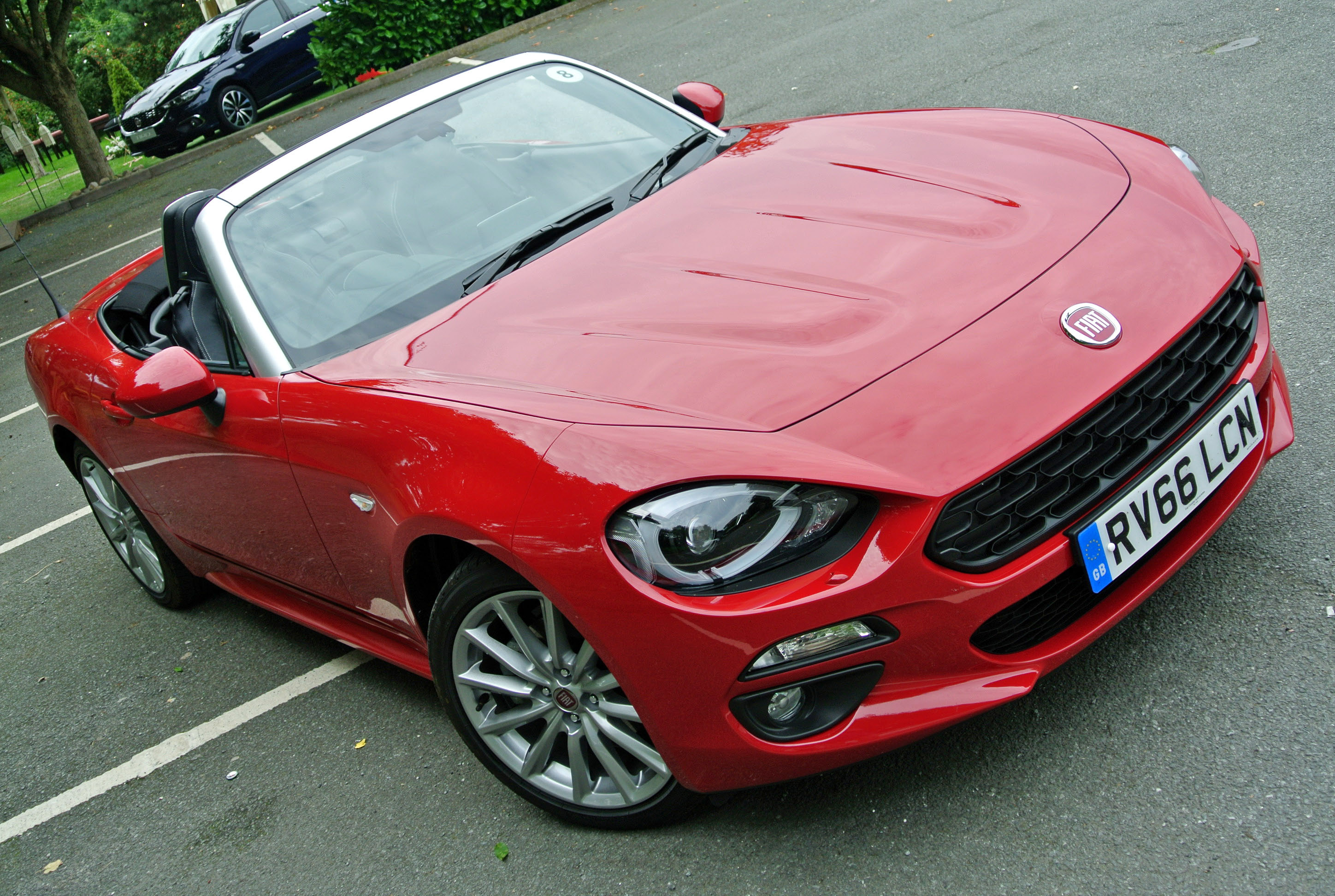 Everyone (well, almost) loves a drop-top sportscar and Fiat has produced some beauties in its time but, states Iain Robertson, the latest 124 Spider will herald in a raft of Oriental benefits unfamiliar in the Latin camp.

Here is a scenario: you are a maker of widgets but you want to strike out into an affiliated direction, with something new, because you believe that your widgets are better than your competitors’ alternatives. What action do you take?

Well, you could indulge in a massive spend, which would involve a new manufacturing process, heaps of fresh hardware and an equally expensive marketing budget. The problem is, it might break you financially. A positive option, albeit one filled with potential pitfalls, some of which might be image related, might be to open up a fresh communication channel with a potential rival. Were you to share research and development, as well as manufacturing costs, you might still be able to place your signature on the end-product and benefit from a marginally diluted market presence.

Enter FCA…Fiat-Chrysler Automotive, which is one of the more recent formative major corporations, in the car business. Steeped in a long Latin history of some of the most outstanding motor vehicles (albeit now in a world partnership with the sometime ‘troubled’ Chrysler Corporation), apart from a slight dabble with the Barchetta model (produced for a decade from 1995) that was never imported (officially) to the UK, it has been 50 years since the original Fiat 124 Spider. 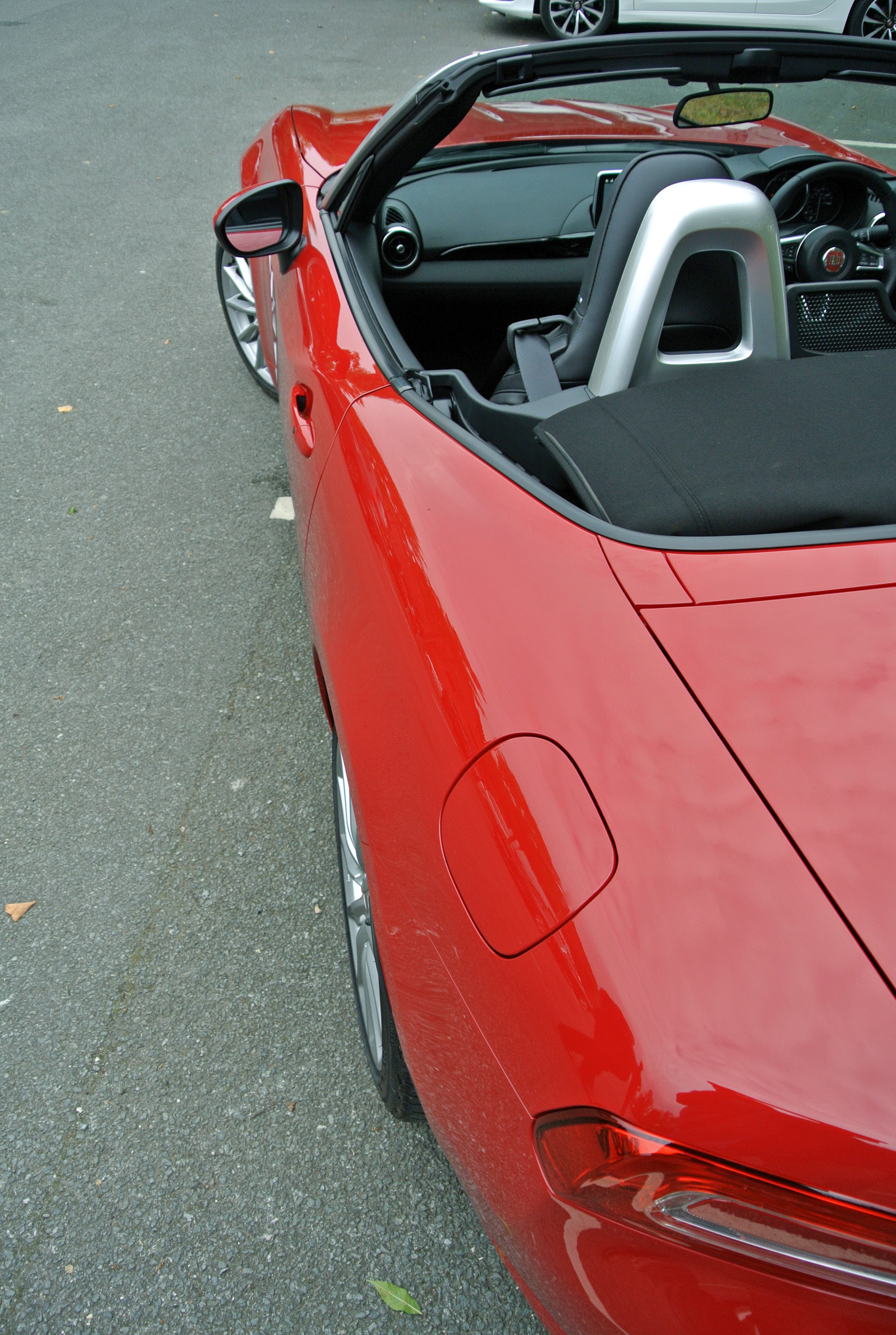 As Fiat does seem to be on somewhat of a nostalgia trip with many of its latest models, as evinced by the retrospective stylings of its Alfa Romeos and the resurrection of the 500 moniker not merely by name for its mainstream brand offerings, reminding us of the rot-prone 124 Spider (not many remain, trust me) should not cause too many repercussions. Incidentally, should you want an example of the original, try California, or Nevada, where the climate has been remarkably kind to Federal-bumpered rag-top Fiats of that vintage…although you will pay through the eye-teeth for the privilege.

Unafraid of the badge, which harks back to the numerical terminology in which Fiat invested in that period, the next task for FCA was to ascertain which car company might be prepared to absorb some of the risk. Merc would not; neither would VW Group, because they have their own vested interests to contemplate. However, partner-less Mazda, now freed from its Ford shackles, has the ideal base…a Hiroshima sportscar factory and production capacity (to make it pay).

Of course, the MX5 is something of a revolution, not least because it evokes the illustrious past and pomp of a period, when Britannia ruled the waves and British sportscars ruled international roads. It is the world’s best selling two-seat sportscar bar none. If Fiat were able to latch onto even a tow-bar of that success, it would be able to share the limelight…or some of it. As the Mazda brand possesses a superb reliability record, Fiat can enjoy some reflected glory. The MX5 platform is a pretty solid one. Front-engine. Rear-drive. Easily raised soft-top. Sweet gearbox. The recipe for success is well channelled.

Naturally, Fiat does not want a faithful photocopy model, thus its designers and engineers got stuck into refettling the Oriental with Fiat’s turbocharged 1.4-litre petrol engine and strengthening the transmission to accommodate the additional twist energy (torque). As such, armed with 140bhp, it dovetails neatly between the 128bhp 1.5-litre and 158bhp 2.0-litre Mazda units, which helps to avoid model confusion. 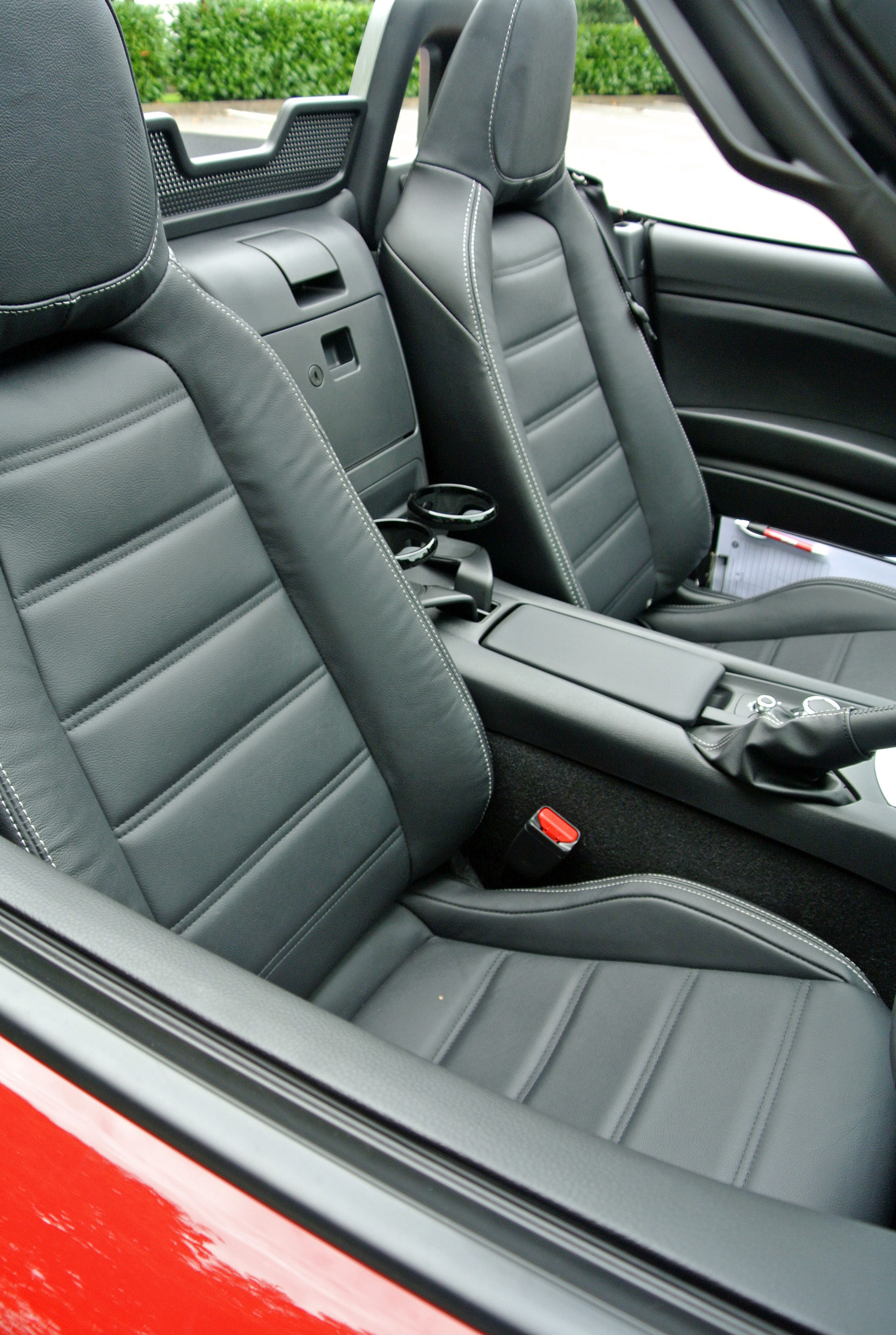 Yet, apart from some minor detail differences in upholstery, which I think looks much classier in the Fiat than the Mazda, there are other technological and instrumentation carry-overs that will be of little consequence to most owners of either marque. As it happens, if any bits were to be shared, at least they are the best ones. It needs to be stated that the cockpit is not exactly tall-person-friendly. The Mazda never has been and the Fiat 124 Spider is certainly not. As long as you are shorter than six feet two inches, the driving position is perfect, with plenty of leg, foot, knee, hip and shoulder space, even though the high quality canvas top might upset your barnet. The range of seat and steering column adjustability, while not extensive, is adequate. In fact, with the top raised, simply by reaching over your left shoulder to grab the handle that latches over-centre on the screen-rail, an operation that takes around two seconds to achieve and, thus, needs no electric operation, cabin refinement is surprisingly good.

As mentioned earlier, Fiat’s nostalgia kick allowed it to delve not-so-deeply into its past…well, fifty years anyway…to produce an updated bodywork version of the original 124 Spider. All of the 1960s’ cues are evident, from the power-humps on the bonnet, to the downward kink of the boot’s trailing edge. Even the radiator shell reflects the styling of the original, as does the headlamp signature. It is a very attractive machine, possessing enough classical elements to distance it further from its increasingly Oriental sidekick. 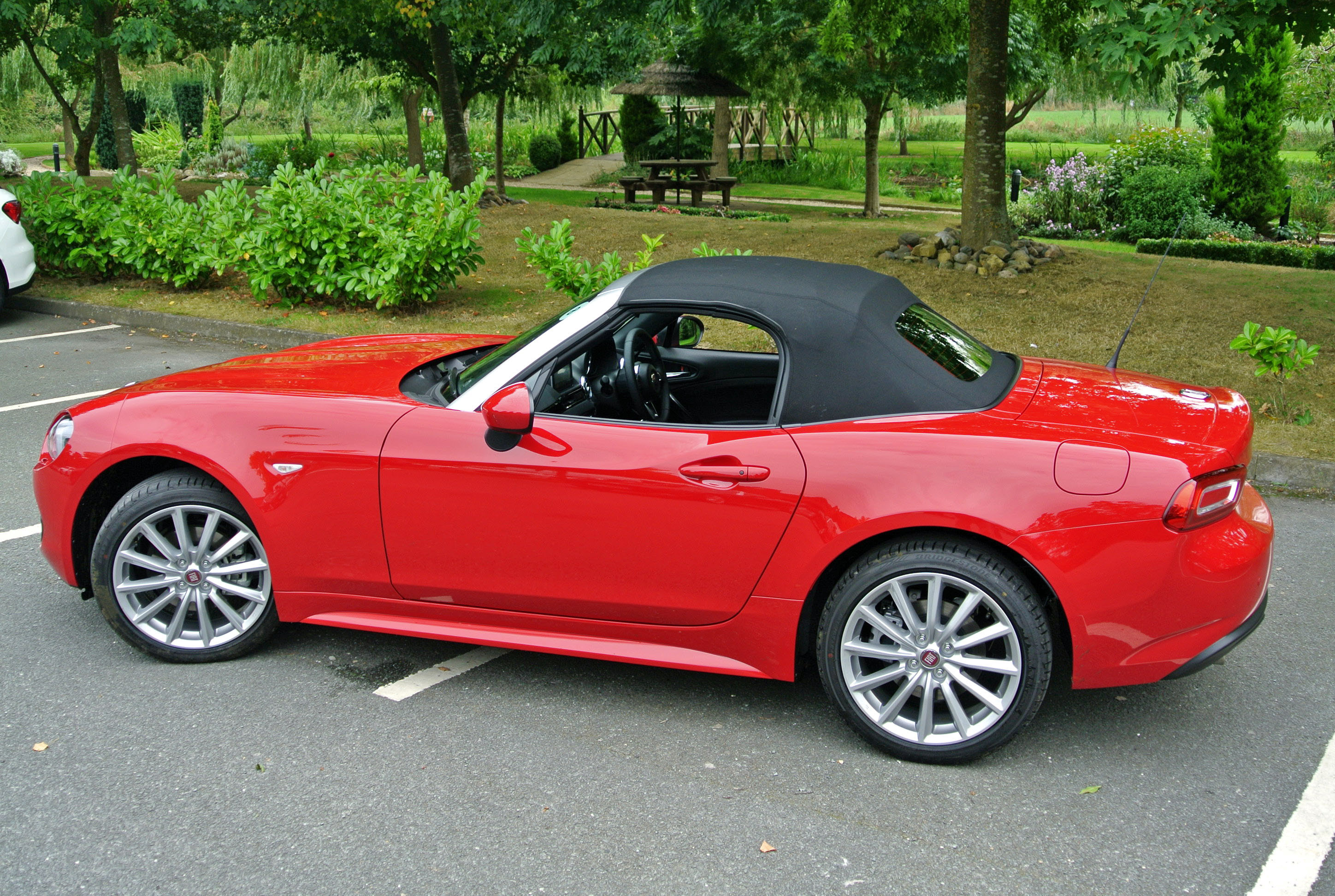 Driving it is immensely pleasurable. The fairly small capacity engine delivers a handsome wallop, which results in a top speed of 134mph and covering the 0-60mph acceleration benchmark in a smidgen over 7.0 seconds, not that wind-through-the-hair is particularly revitalising at its maximum velocity. Driven with caution, its Official Combined fuel return of 44.1mpg could be within reach, although the best I attained on some of Cheshire’s most demanding back-doubles was closer to 32mpg. It emits 148g/km of CO2, which equates to a £145 VED fee annually.

Its ride quality is firm but surprisingly supple and proves capable of absorbing most road surface imperfections with aplomb, although sharper-edged holes can jounce the Spider quite suddenly from its chosen path. Fortunately, the standard stability control ensures that it regains its intended track almost immediately. Opt for the 17-inch alloy wheels (16s are standard) and the 205/45 profile tyres will add to road noise intrusion. The all-round disc brakes provide assured stopping power and the flick-knife gearshift is an utter delight to operate, being both short in travel and capable of shifting ratios as fast as the driver can synchronise hand and foot motions. 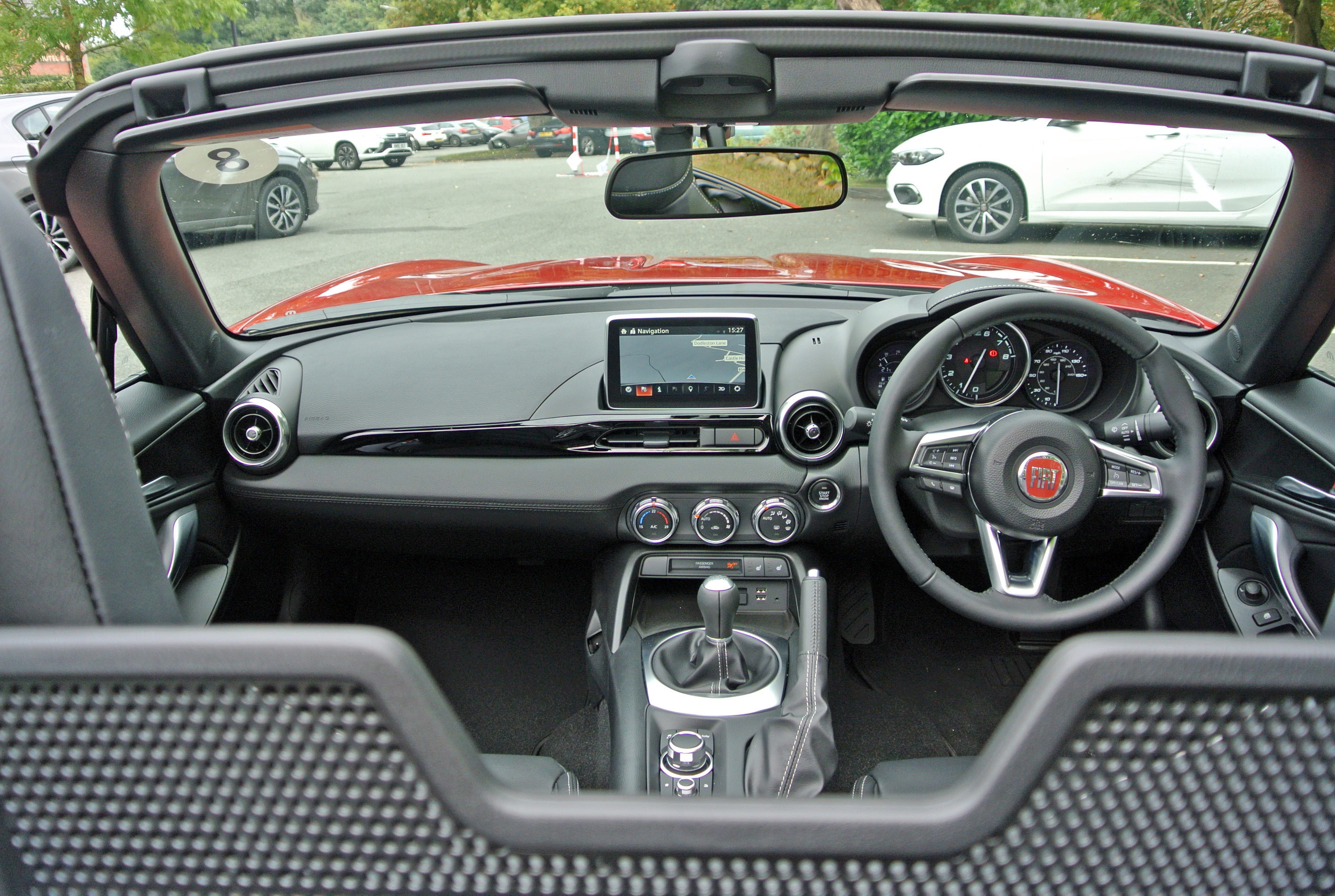 There are three trim levels available: Classica, Lusso and Lusso Plus. The differences between them are actually minimal (air-con standard; climate control otherwise) but tailored to budget. Prices start at £19,545, rising to £22,295 and £23,295 respectively. The options list is small and will not add too much to the invoice, although a racier Abarth version (talked about and available in Fiat’s domestic market) is sure to attract a significantly higher price tag to accompany a promised 200bhp, which will test the integrity of the platform to fresh extremes.

Fiat has been very smart with its choices. The 124 Spider carries a premium of between £400 and £1,050 over the MX5, which I feel is justified, as the Spider simply feels so much classier than its Japanese progenitor. I believe that the elegant appearance will have a most positive effect on the consumer and, while the 124 might never reach the well-over 1m sales of the Mazda, it will provide a healthy shot of extra business to a car firm that is recovering most satisfactorily from its GM misdemeanours of well over a decade ago.