Hitting two birds with one stone is a popular activity for Iain Robertson, whose car review skills can also be read within the pages of this site and combining his love of travel with a latest model is a thing of delight to him.

Driving on some of my favourite roads around the world has become something of a preoccupation. Over the years, I have contested (and won) competitive events that have taken me from Nordkapp, Norway, (the northernmost point of Europe) to Cape Tarifa, Spain, (the southernmost). I have driven the wondrous RN85 from Nice to Geneva. America has not been left out and I have tackled the world’s most gruelling off-road course, The Rubicon Trail, over the High Sierras, above Lake Tahoe, as well as both the Pacific Coast Highway (from Mexico to Canada) and Highway 1 (from Florida mainland to The Keys).

Yet, while I do enjoy regular drives on some of the UK’s best routes (A68, Darlington to Edinburgh; A46, Lincoln to Cirencester; A832/890, Inverness to Lochcarron), one has escaped my attention, until now. It is not strictly in the UK, as it runs down the Irish west coast. It is also the longest, defined coastal route in the world, being over 2,500kms in length. Known as The Wild Atlantic Way and epitomised by its stylised ‘WAW’ signposts, as I have now discovered, it is not merely testing, both on the car and the driver, but it is also one of the most spectacularly scenic routes that I have ever driven.

To be fair, my week of discovery was not without purpose, as Suzuki Cars GB had commissioned my services to direct a product video of its latest Baleno model, in mild hybrid, SHVC form. For a start, that would restrict my Walpoling activities somewhat, as we only had four nights booked in Ireland (with one of them at Ballymoney, in the North). Yet, I felt so encouraged by the sheer magnificence of the trip that I have no hesitation in suggesting that I shall return and, next time, it will be to complete the full, challenging route, from north to south.

Travelling to Ireland by car demands the use of various Irish Sea ferry services. Accompanied by a colleague (Rob Marshall), who would be producing the audio-visual aspect, we caught the 8.55am Stena Line ferry on a Monday morning, from Holyhead, on Anglesey. Dublin was our first port of call, just over three hours later (£316 open return, priority loading for car and two persons). We used the Premium Service, which enables access to a private lounge on-board that is free of the whiff of shell-suits and screaming children. We were also able to enjoy a freshly cooked breakfast (£8.20 ea), with free coffee, other refreshments and the morning’s newspapers.

Dublin was its usual bustling self and, because I had not reset the parameters on the car’s in-built sat-nav system, we traipsed through midday traffic, from its docklands to the suburbs, without using the more convenient motorway network. Mind you, while it is an error I shall not repeat in a hurry, at least I was able to ‘people and places’ spot, with much amusement and fascination. The Irish are renowned for their partaking of ‘the craik’ (pronounced ‘crack’ but packed with self-effacing humour, as logging onto the local DAB radio station proved beyond all doubt).

Eventually, we found our west-bound route along the N4 to Longford, diverting onto the N5 to Westport, before reaching Achill Island eventually, where the video shoot would commence. Crossing the Atlantic Bridge, over Achill Sound, some three and a half hours after departing Dublin, the roads are often wide, open but not heavily trafficked. A polite driving custom in Ireland is for slower vehicles to pull onto the margin at the side of the road to allow faster vehicles to pass. It is a legacy of not having an extensive motorways network and part of the reason behind the local police (Garda) being more lenient on ‘speeders’.

Mention of which introduces a delightful tale about the chap being stopped by the Garda for exceeding the 100kph N-road limit. Asked if he knew why the policeman had stopped him but not wishing to admit liability, the chap retorted, “I think I do…”, to which the policeman hinted that he had been speeding. Again the policeman asked, “And, do you know what speed you were travelling at?”. To which the fellow lilted that he did not, only for the Garda to highlight that as he did not know either, the miscreant was free to continue!

Kate O’Malley was our host at Achill Cliff Hotel (00353-9843400), which overlooks the wide expanse of Keel Beach and the glowering, cloud-bedecked Achill Cliff. However, prior to booking-in, I was keen to make a reconnaissance of our first location for the next morning, at Keem Strand, where we intended to start filming at dawn. A one-road access to and from, it clings to the mountain-side, with spectacular drops to the Atlantic Ocean below, before culminating via a series of challenging and steep S-bends at the Strand, where the sand is immaculately clean and white and the shallow water is crystal clear. 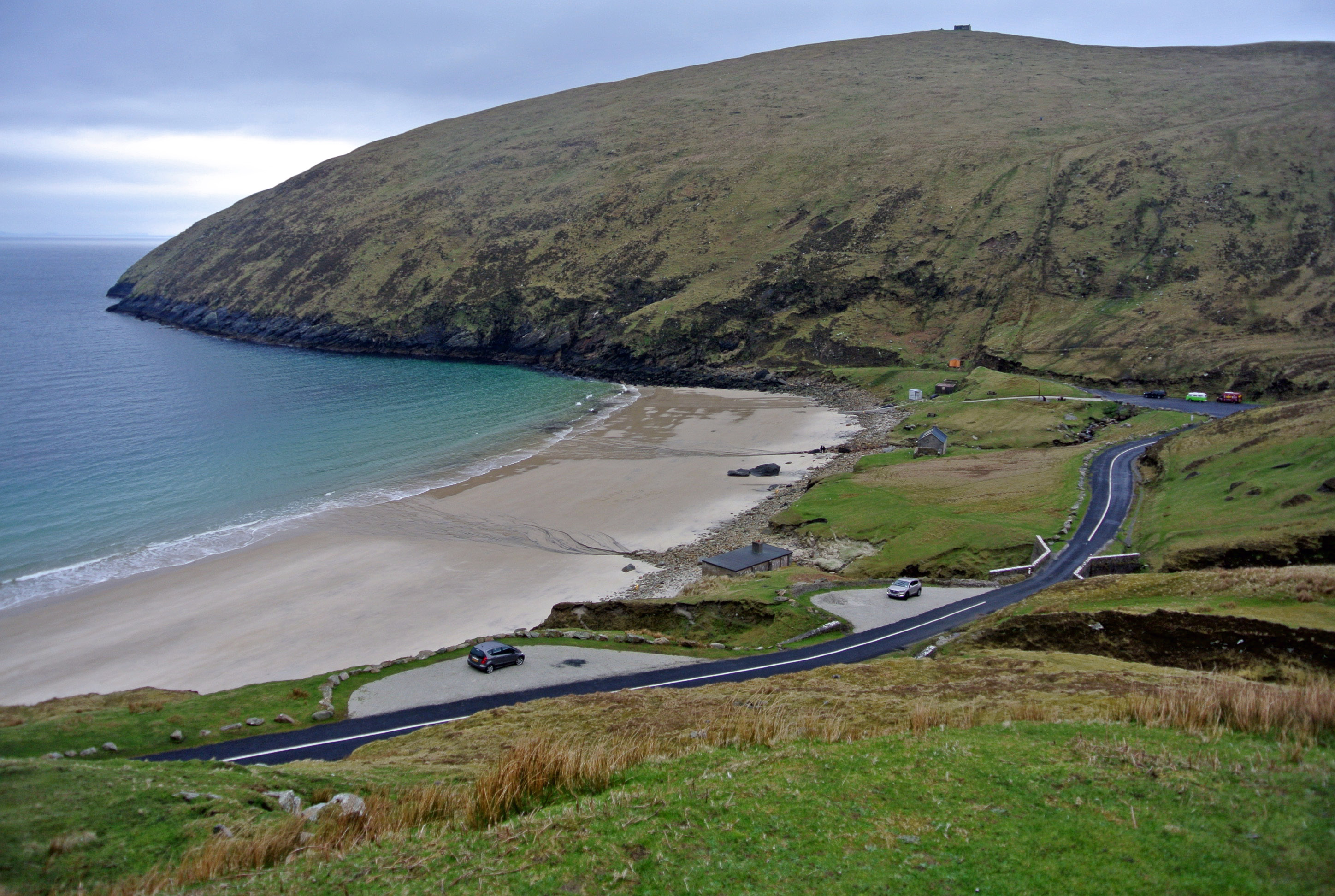 To say that I was moved by the location was an understatement. Keem Strand is simply the most beautiful, wild and picturesque spot I have ever visited. I shall return to it.

Dinner in the award-winning restaurant at the hotel was splendid, with locally sourced fresh fish (salmon for me, sea bass for Rob) for main course, followed by rhubarb and apple crumble (with custard, naturally!) for me and a crème brulee for my colleague. At Euros70pn, the accommodation was spacious and comfortable, with the feel of a remote outpost to it. The staff were effortlessly charming.

Despite atrocious weather, we commenced the shoot next morning, returning to the hotel for an excellent Irish breakfast, after filming at both Keem and on the green at Keel. We continued on the WAW, back to the Atlantic Bridge at Gob an Choire, then heading south towards Newport. It needs to be said that the road does not boast the smoothest of surfaces and it is narrow in places, which might determine the type of car that you take on this trek. The Suzuki was perfect in all respects.

Newport and its twin stone bridges over the Blackoak River was a great location to gather some drone footage, prior to making a lunch break at the Hotel Newport and the Seven Arches Bar and Bistro. Once again, the food was outstanding and the bill for four people (a local drone pilot and his camera operator mate joined us) came to a cost-effective Euros36. The local ‘folk art’ on the wall opposite the bistro highlights some of the area’s troubled past.

While Newport had been dry, the sky was still grey, until we headed further south on the WAW, past Clog and the beautiful Killary inlet, when the sun burst finally onto the Wild Atlantic Way. The scenery, with flowing mountains plunging steeply into either freshwater loughs, or the myriad sea inlets, remains stunningly gorgeous. This is not emphatically the green grass expected of Ireland, despite the immense rainfall in the region. Instead, golden and granite rocks pepper the highland landscape, as the road weaves a picturesque route to Clifden, our next coastal destination on the WAW.

Mrs Julia Foyle and her husband would be our hosts at Quay House Hotel, located on Beach Road, just south of the town centre. It was another perfect location, adjacent to the waterside, and, while the rooms were a slightly pricier Euros90pn, I can honestly state that, while expensive for a guest house, the wonderful location is more like a ‘boutique hotel’. Each characterful room is packed with artefacts, both ancient and antique but never to the point of prissiness. I would venture to suggest that there are more valuable collectibles within this one dwelling than exist in The Savoy Hotel and nothing looks to be out of place, or lacking in quirky character. 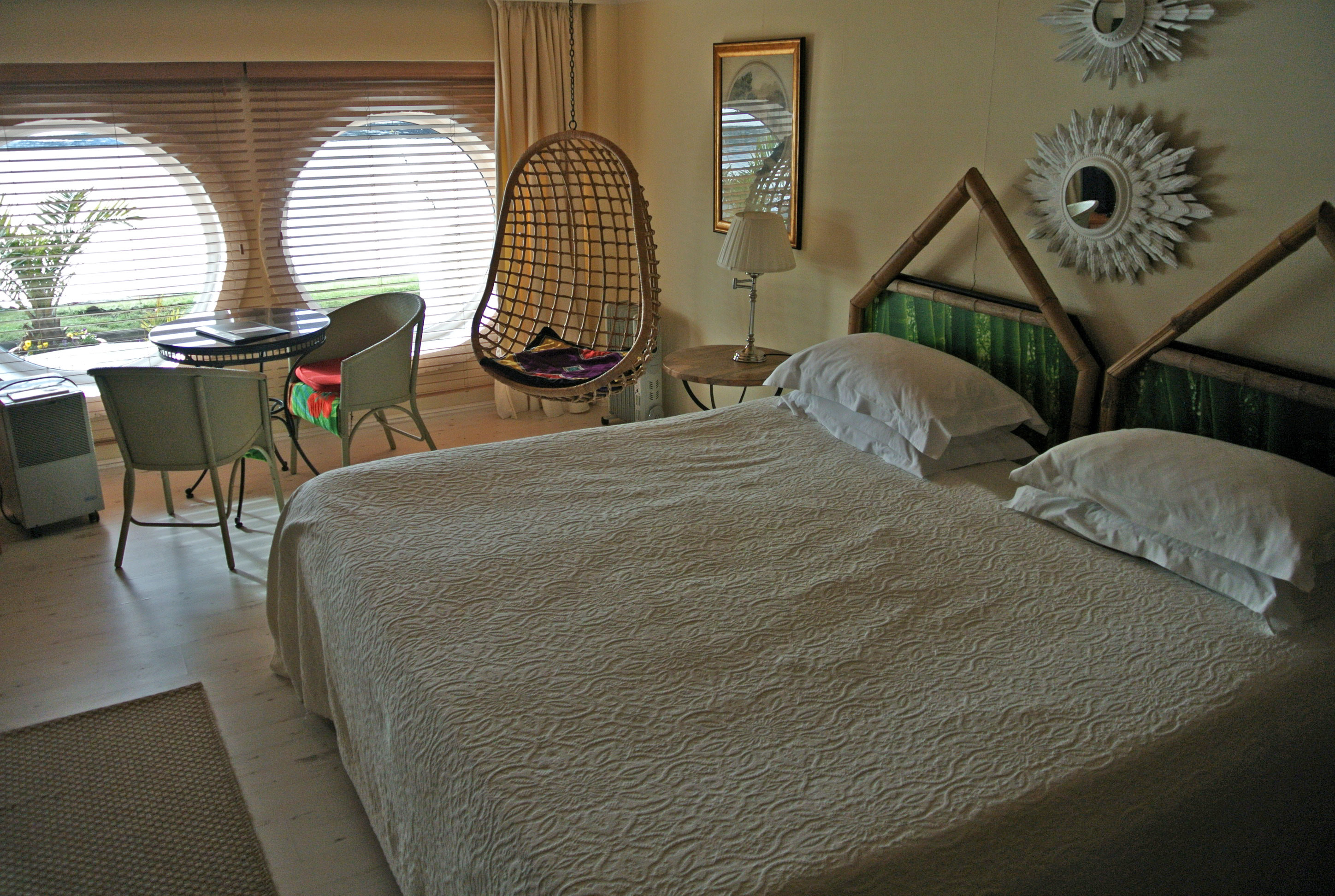 The Bamboo Room at the Quay House Hotel, Clifden

Having arrived at around 3.00pm gave us a chance to shoot some additional drone footage and make a number of cutaway shots, so perfect was the natural light. As we would not be dining in the guest house, we had arranged to bring in a take-away from the local Indian restaurant that evening, as it suited our shooting schedule somewhat better. 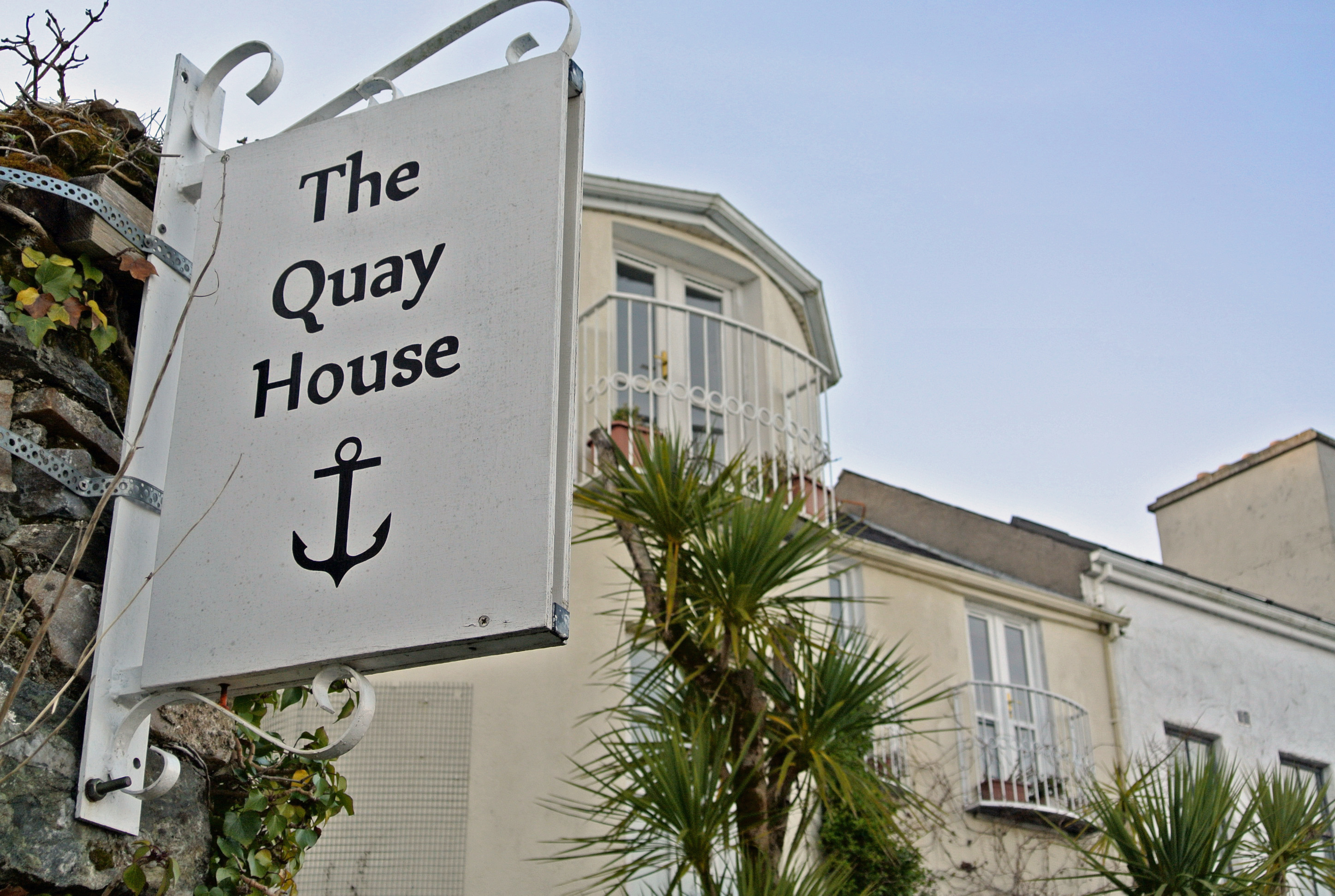 Julia’s husband, Paddy, gave us some useful hints as to where we would be able to obtain the best sunset shots, which was when I appreciated another uniquely Irish foible. He suggested that we try the Sky Road, both Low and High alternatives and his directions could not have been more succinct: “Travel along this road for about two minutes…you will reach a road where you cannot go any further…turn right and continue for around three minutes to a crossroads…”. Forget convention in Ireland! Distances dissolve into time slots and he was right. The sunset shots of the car, taken on a private stretch of beach, to which the local farmer allowed us access, were awesome.

Following another fine evening’s rest, we indulged in a generous breakfast, included in the room price. Julia’s lemon drizzle cake is to die for, while her son’s skills in the kitchen are exemplary. I have no hesitation in recommending The Quay House (00353-9521369) to visitors, as either a convenient and comfortable stop-over, or for a longer-stay holiday base.

In Part Two of this Irish jig, we travel to Galway Bay and then to the North.

Great review of the Wild Atlantic Way. I’ve not seen this angle of Keem bay, great views from the road!

Thanks, Lianne – make sure you check out Part Two!