Continuing his drive in Ireland, Iain Robertson takes in the allure of Galway before tackling a near 200-miles drive to Northern Ireland and one of the most mystical sights made famous by one solitary Hollywood movie.  Read Part One here.

My current admission is that I have fallen head-over-heels in love with Ireland. The warmth and welcome of its people, their humour, their sense of balance, their food and their hostelries have all but eluded me, for some peculiar reason. Oh, sure, I have been to Ireland before. I have stayed in some of its finest hotels near Dublin and Belfast (in the North). I have even taken a holiday in the Cork and Killarney areas. However, I had never been as far west as the Wild Atlantic Way demands and it is an area to which I shall return, make no mistake. 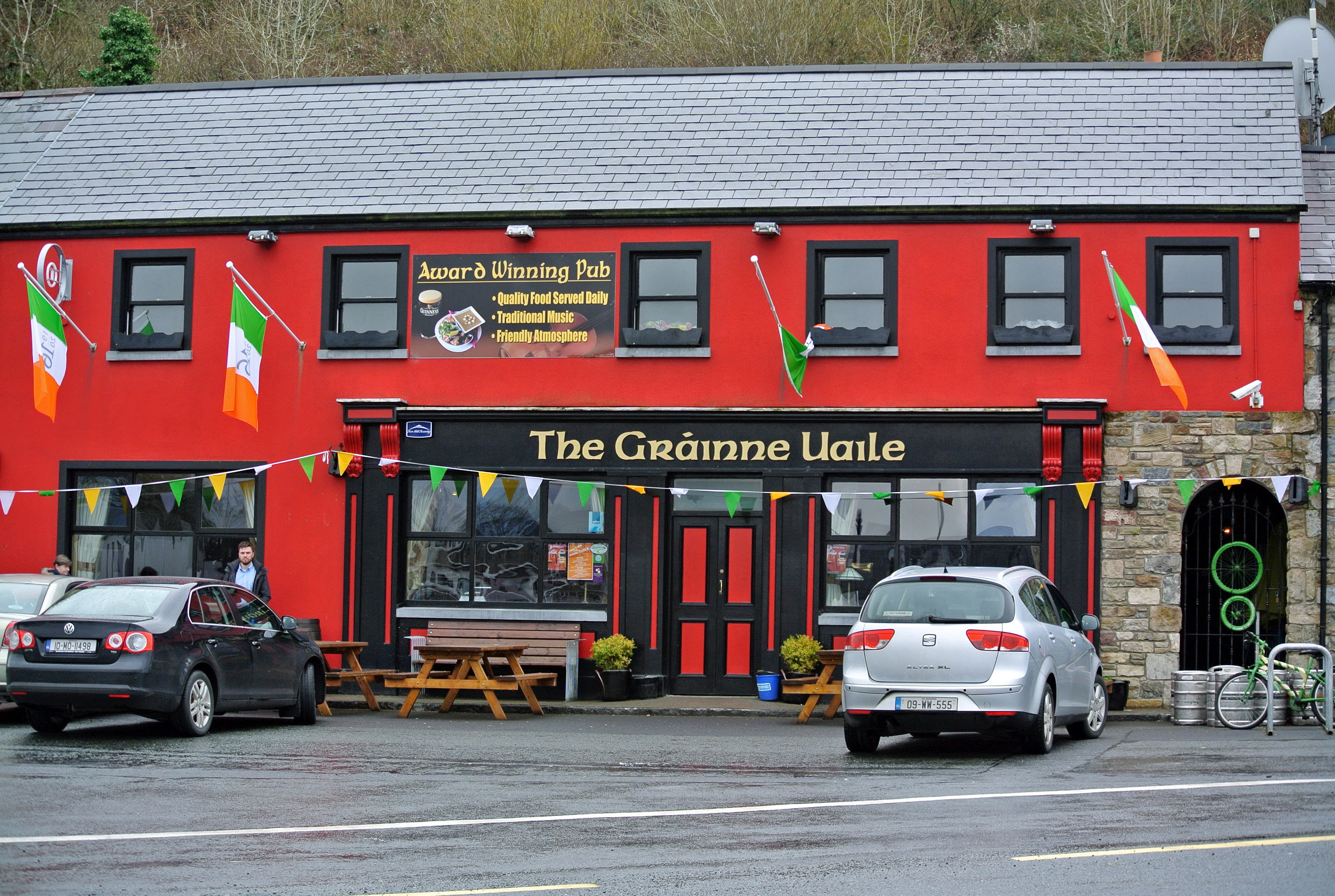 So far, in this story, I have resided at an Achill Island country hotel and a Clifden guest house. After experiencing some aspects of County Mayo, we headed to Galway, which is the bustling university city that is also the most heavily populated centre of Ireland’s west coast. For a start, the traffic flow was intense and the city centre was packed with people, many of whom were foreign visitors, arriving in their coach-loads. We would not be staying in the city, as I had booked a boutique hotel, The Twelve, at Barna, just four miles west of Galway centre, for our third night.

Before getting there, we had to continue our video shoot of the new Suzuki Baleno motorcar. Therefore, we headed for the docks and also generated some useful city centre footage. A brief trip to a beach on Galway Bay also provided some useful shots in changeable weather conditions.

Eventually, for our third night in Ireland, we would reach The Twelve (00353-91597000). Parking in its dedicated zone (conveniently under cover), meant only a few yards stroll into the reception area, where we were greeted with a warm, alcoholic punch…no, not an over-exuberant Irishman but, rather, a tasty, cockle-warming drink. The vestibule is spacious and furnished in a most modern but high quality manner. Our rooms were on the first floor, as is the West Restaurant, which we would experience shortly for dinner. 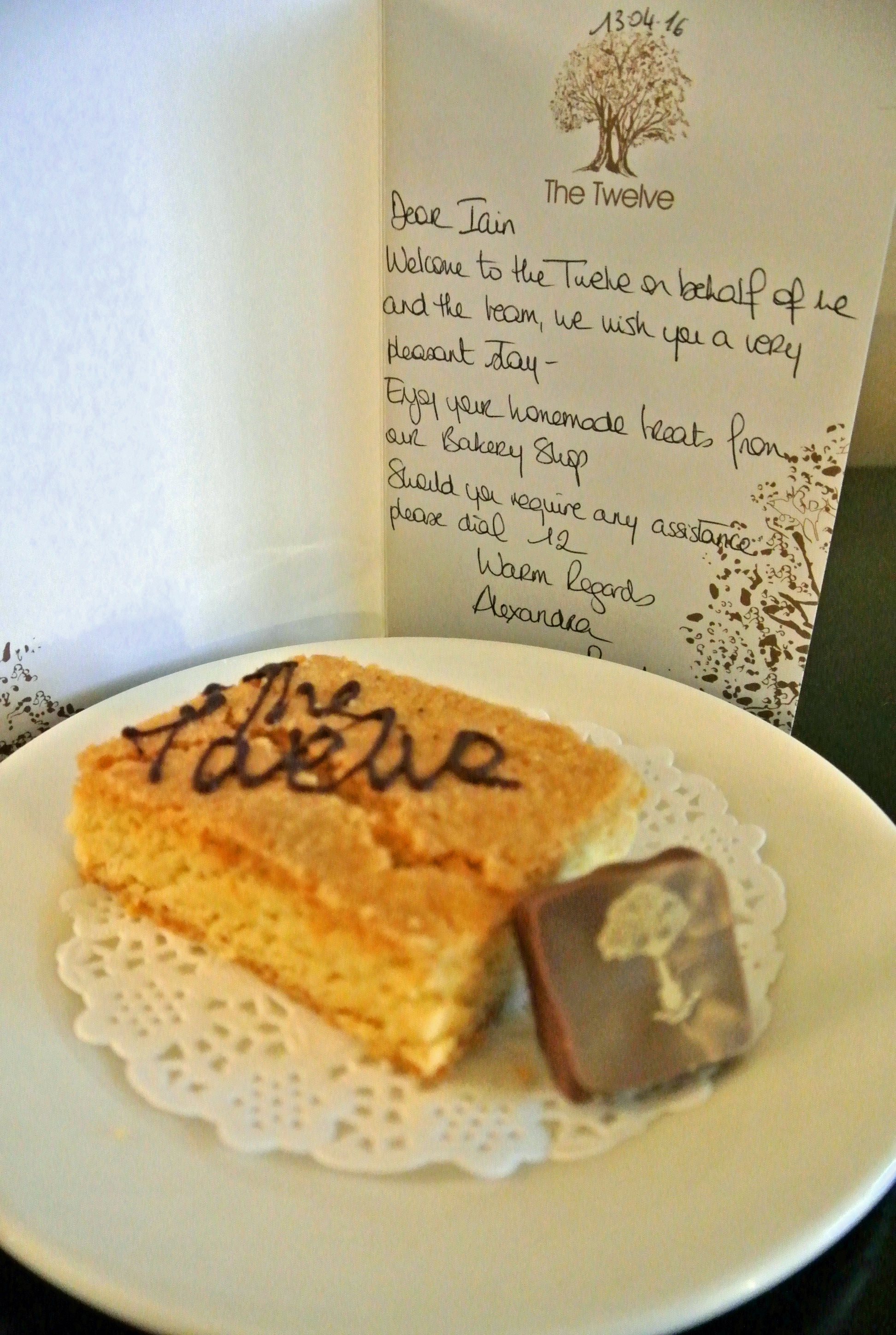 Luxuriously equipped and exceptionally comfortable, my bedroom featured a king-size bed, a writing desk, large-screen LCD TV and an amazing en-suite bathroom, complete with ‘disco lighting’ and boutique style fittings. My travelling colleague, Rob Marshall’s similar room looked out onto the street, with a full-access balcony, while my room, with a Juliet balcony, overlooked the car park behind the hotel. A lovely hand-written card accompanied by a chunk of buttery shortbread and a home-made chocolate provided a further welcome.

The West is managed by a first-class French maitre d’, whose local knowledge and delight at providing only the finest quality of service were matched by a superb menu providing Michelin-grade food, in generous portions. After consuming an amuse-gueule of perfectly tempura-battered squid, with a squid ink sauce, my starter of vegetable soup was severely understated. It was flavoursome and utterly delicious, accompanied by tile-warmed Irish soda and seaweed scones. Rob enjoyed his ham hock entree. Following a pallet-cleansing pink champagne sorbet, I dug into a red pepper omelette, accompanied by lightly battered vegetables, while Rob had a steak. We shared deep-fried kale and crushed small potatoes as side dishes. For dessert, Rob enjoyed a crème brulee, while I partook of an individual apple pie with caramel ice-cream. It was all fresh, made on the premises and was utterly delicious. Our food was washed down by a pint of Hooegarden wheat beer and the local Galway Hooker pale ale. 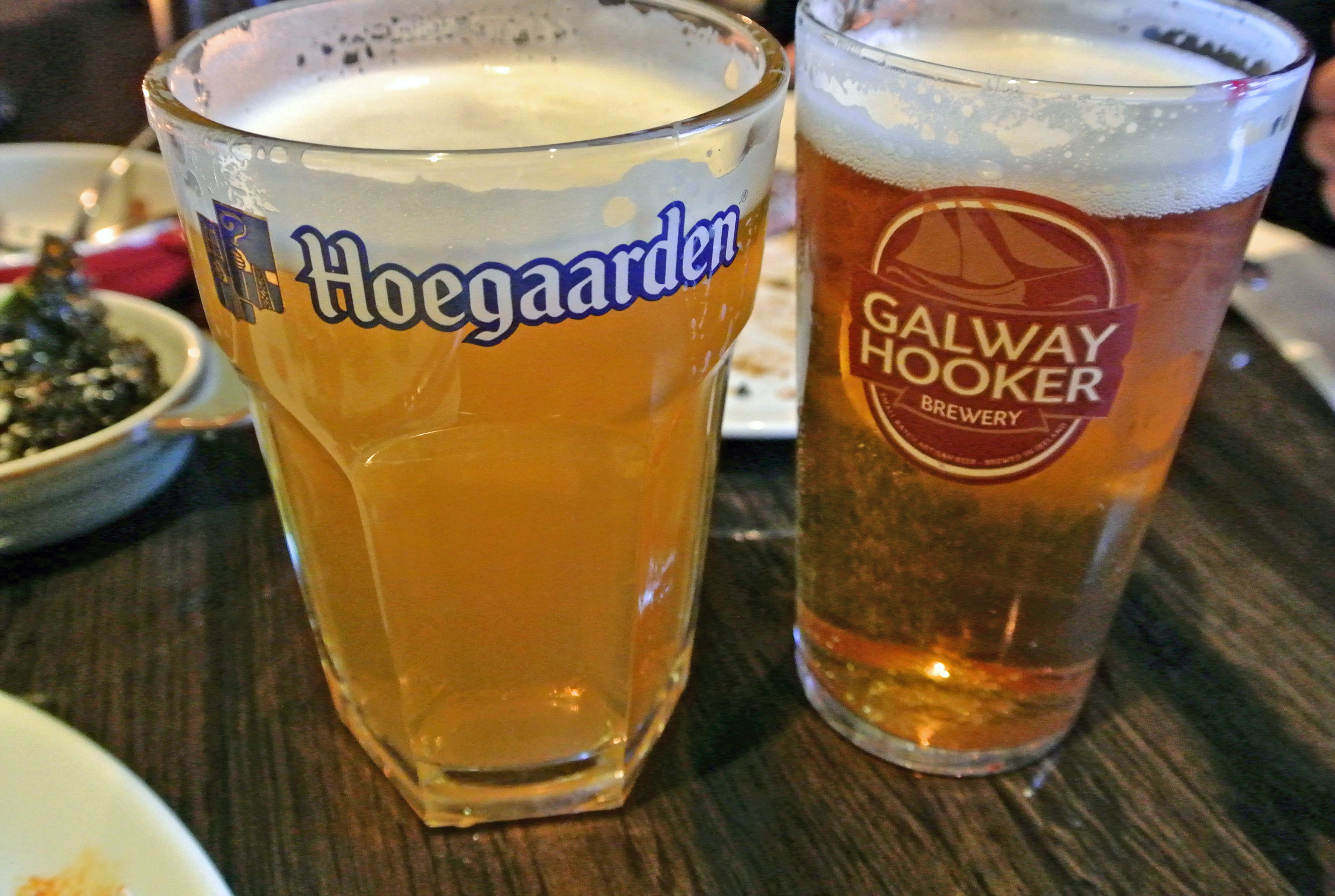 Next morning, we arose early for a hearty Irish breakfast, in the on-street level brasserie, before settling the bill for a most reasonable Euros108pn, with a further Euros30 (each) for dinner.  Our drive to Ballymoney, in Northern Ireland, would allow some additional footage to be shot in glorious Irish countryside, which is a lot greener and flatter than we had experienced on the WAW. As it happens, we would rejoin the WAW as it skirts the NI border, on our chosen route. 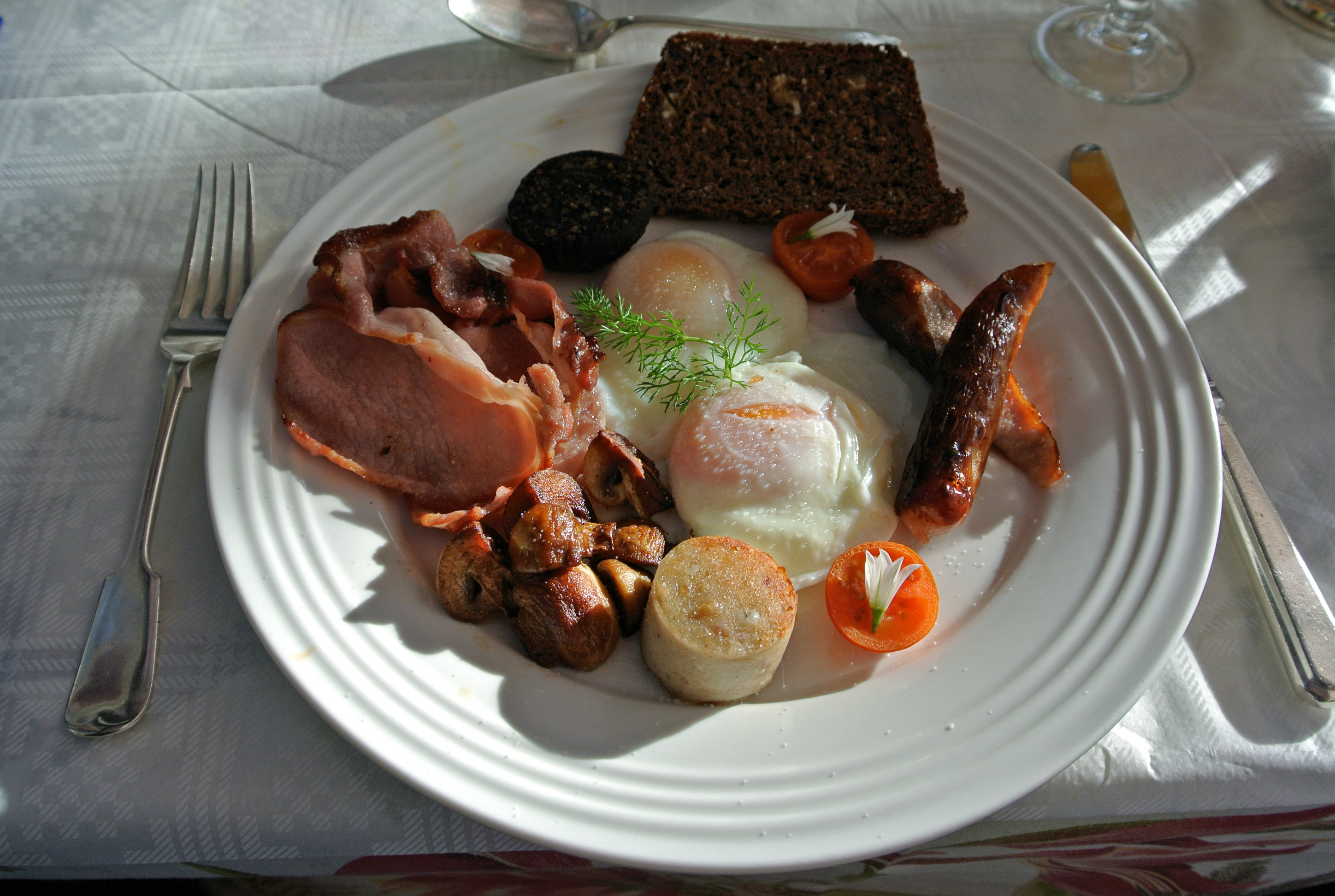 Having stayed in a 4-Star hotel, on our last night in the Republic, we would take up residence in The Pine Trees B&B (0282-766-7175), owned by the irrepressible Elaine Buller, in the delightful town of Ballymoney. Our route took us through some lovely scenery, most notably across the Blue Stack Mountain range, slightly inland from Donegal Bay. Before reaching the bridge that crosses the River Foyle, from Donegal into Londonderry (NI), we made a brief stop at the pretty St Columba’s Church, in the lee of the Sperrin Mountains, where WB Yeats, the literary revivalist and famed poet, was buried in 1939, at the age of 73 years. 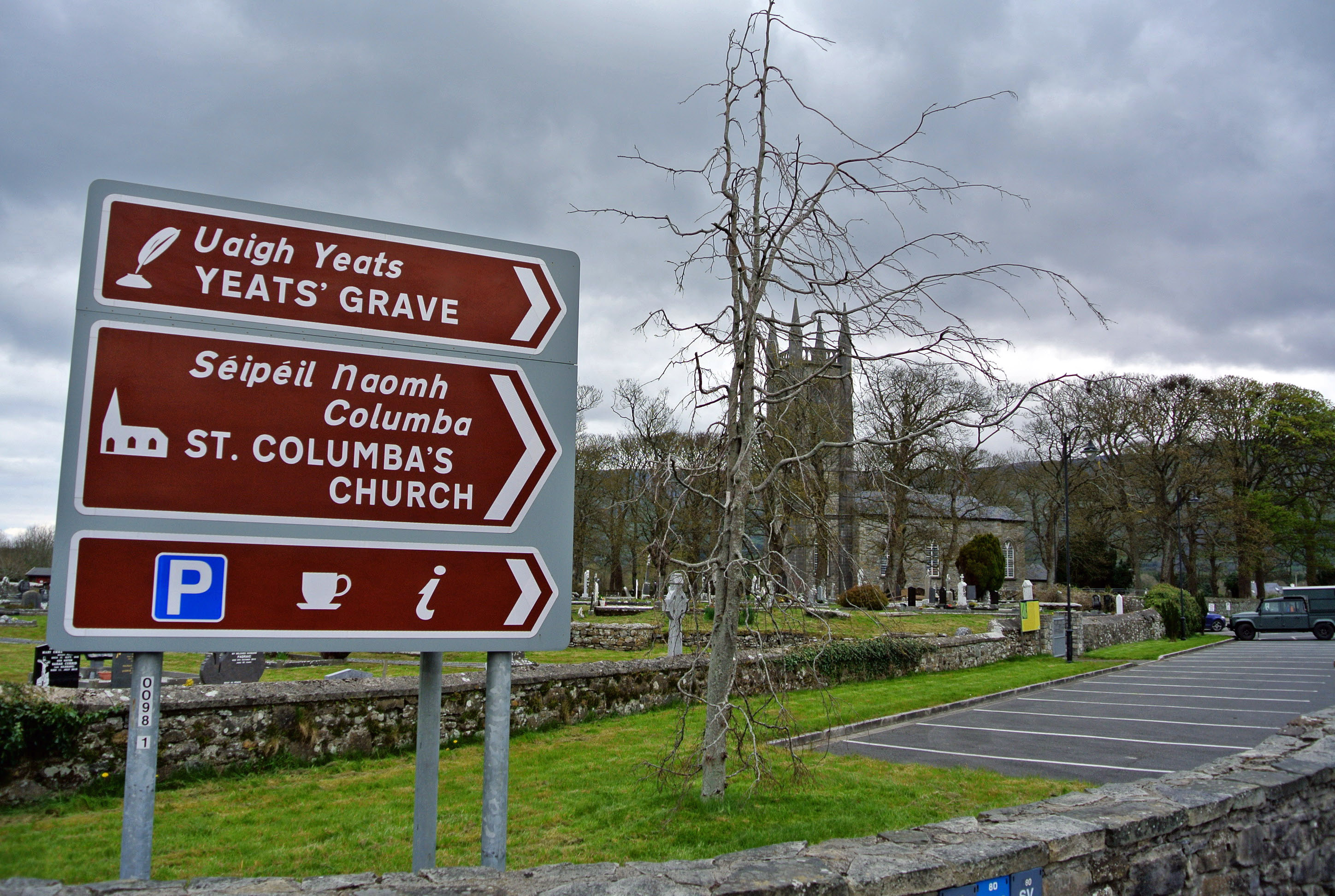 Our final location was actually The Dark Hedges, an avenue of birch trees made famous by it featuring in The Game of Thrones film. Much visited and almost impossible to film, or photograph, due to the high number of visitors, we were very fortunate, close to dusk, to obtain a driving shot that would be used as the dramatic introduction to the video we were making. Although this natural arboreal feature is said to have been planted by the Stuart family, as an impressive driving route into their lovely Georgian Gracehill House, which is located at its western end, historians suggest that some of the trees pre-date the property by at least a couple of centuries. It is an intriguing paradox but there is no denying the mystical beauty of the gnarled trees and the ways in which sunlight dances off them, changing their visual appeal constantly during daylight hours. 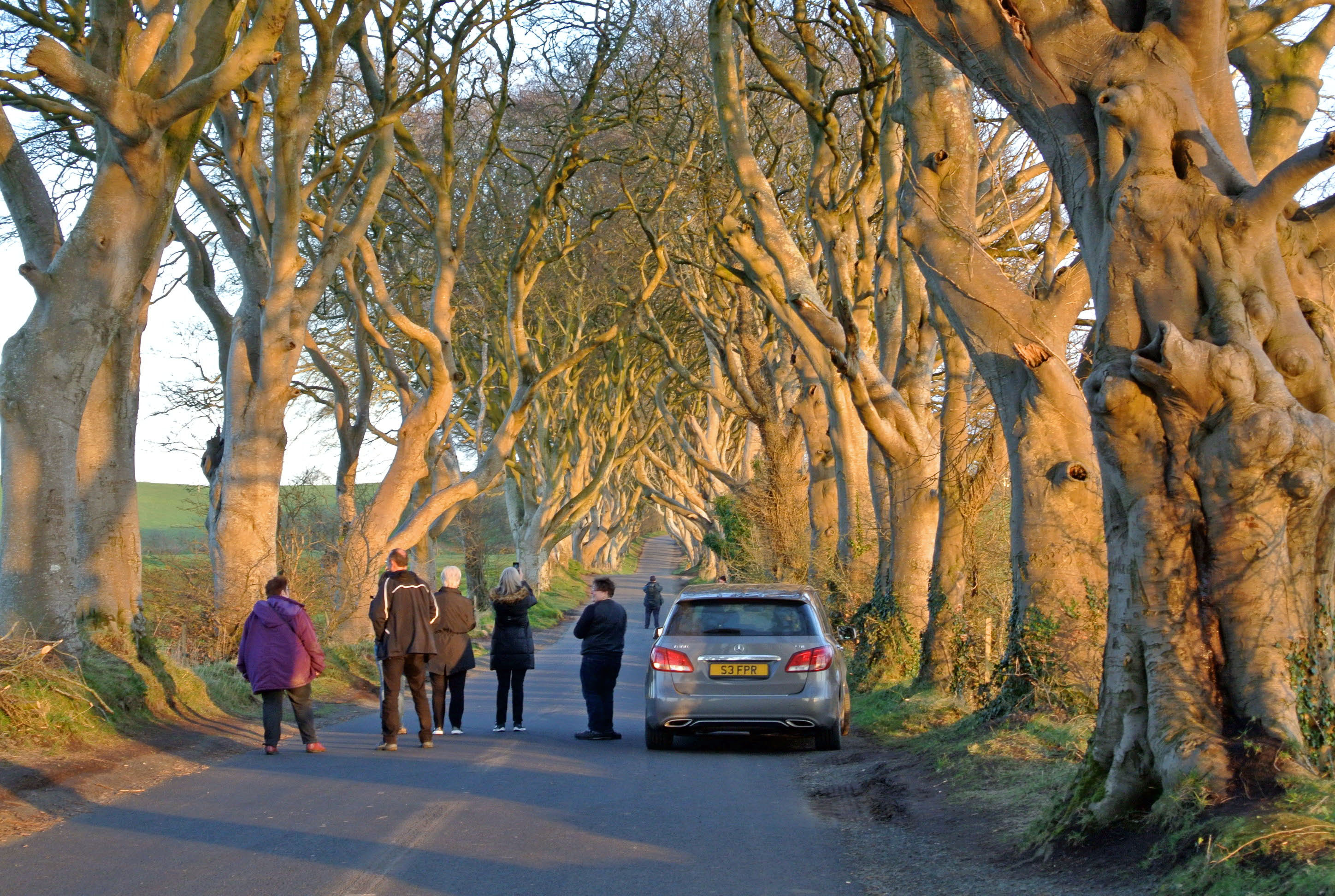 Retiring to Mrs Buller’s fine home, our rooms were exceptionally spacious and comfortable, possessing the appeal of a high-class hotel, complete with en-suite facilities and complete privacy. While the Northern Ireland accent is harder edged and more grating by comparison with the softer lilt of the south, Elaine was no less welcoming and thoroughly charming, as had been all of our hosts. While we dined out on pizza in town, on our last evening, our full Irish breakfast next morning was as complete as we had come to expect from every accommodation in Ireland (£30pn). It was a perfect prelude to the drive south, back to Dublin, to catch our ferry back to Holyhead.

It is worth noting that Northern Ireland is more like England-shire, with the same road rules and signages as we have at home. However, the Republic is very much like a foreign country, with the notable exception that they speak in an accented but similar way to us and drive on the left, as we do. This divide is never more obvious than when crossing from North to South on the motorway between Belfast and Dublin, the respective capitals. Everything, from architecture, to road markings, is completely different and even the geography highlights distinct variations.

While we were carrying out work across the Irish Sea, the value of Ireland cannot be overstated. It is a beautiful country of wildly contrasting scenery, some of which is truly spectacular, while its people are outstandingly friendly and a delight to be with. It is often said that we, British, spend far too much time looking abroad for holiday destinations but not exploring enough on our own doorsteps. Well, Ireland, in all its glory, even in a drizzly spring, is a place worthy of greater investigation. Obtaining value for money is not difficult, as I hope that my choice of different classes of accommodation proves, while ferry costs are reasonable. Dining out is a delight on the Emerald Isle and the costs are broadly similar to those at home, in Blighty. I know that I shall return, probably sooner than I expect. I hope that you follow suit.