HomeMonster MotorsDoes Alfa Romeo have a chance with its hot new Giulia?

Does Alfa Romeo have a chance with its hot new Giulia? 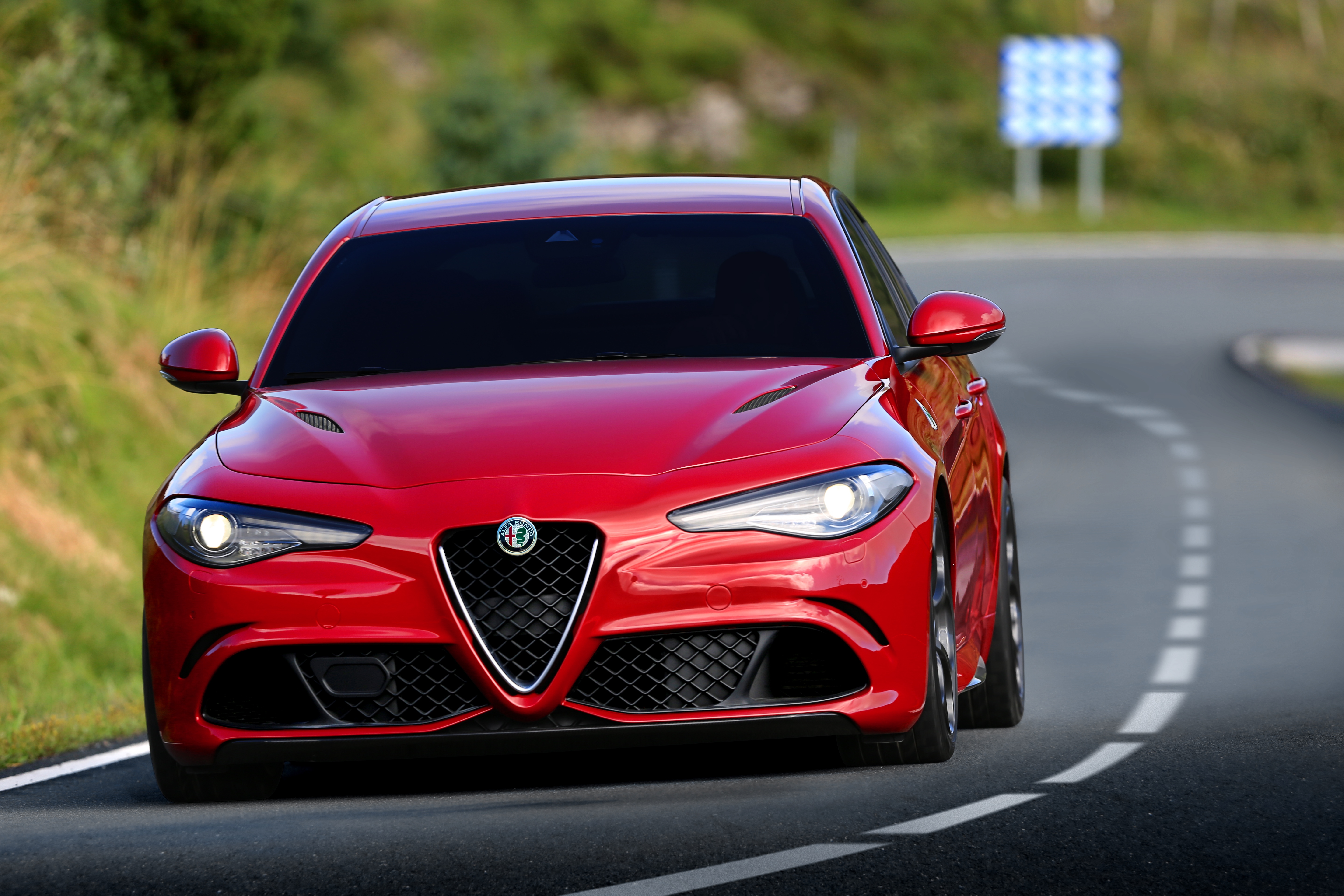 Tackling the miasma of automotive marketing methods, with a new model, states Iain Robertson, might be fine if the target was anything other than German BMW but an Italian die has been cast, which might be a last straw.

Having highlighted the detail of Alfa Romeo’s charismatic emblem before, I shall not bore you with another historical diatribe but, if there is one badge that seems to summarise the multi-coloured, multi-level past of the Italian car industry, then this is it. Sadly, the issues that have stymied the brand’s progress in the UK have not exactly set the heather alight in other markets either. Alfa Romeo remains a marque possessing marked issues.

Despite a feeble attempt, not quite a decade ago, to relaunch Lancia (Alfa’s sister brand), albeit carrying Chrysler badging at the time, rumours persisted, as they have done for much of the past thirty years, that Alfa Romeo’s days were numbered. Master of all that he surveys, despite my concerns that another automotive demi-god is not the answer that Fiat-Chrysler Automotive needs (a well-intentioned leader would be a positive kick-start, in the post-Agnelli years), Sr Sergio Marchionne does appear to be putting the right building blocks in place and Alfa Romeo is on the survival list, even though Lancia is not.

My personal memories of the brand have always questioned the non-questioning manner in which most Alfa owners appeared to buy a succession of unreliable, ill-built, poorly trimmed sporting models carrying a variety of designations from 33 to 146, with 155 and 164 thrown in for good measure. The first Alfa in a more modern mould that truly impressed me was the 156, which also heralded the use of retrospective styling nuances that added more than a soupcon of attractive detail. Yet, the model was spattered with abysmal levels of poor dependability, grim electrics and mechanical maladies galore.

It made things very difficult for a motoring scribe, who wanted to construct a responsible and truthful review of a new product. Yes. The 156 worked rather well, straight out of the box. However, put a few miles under its belt and the silliest of occurrences would make me worry about the integrity of my words. I can still recall, having dropped off the Alfa Romeo delivery driver at the station, at the time, as I squirted the 156 2.5 V6 model back home, the entire exhaust system fell off, from the manifold back. Alfa/Fiat Group had problems for sure. 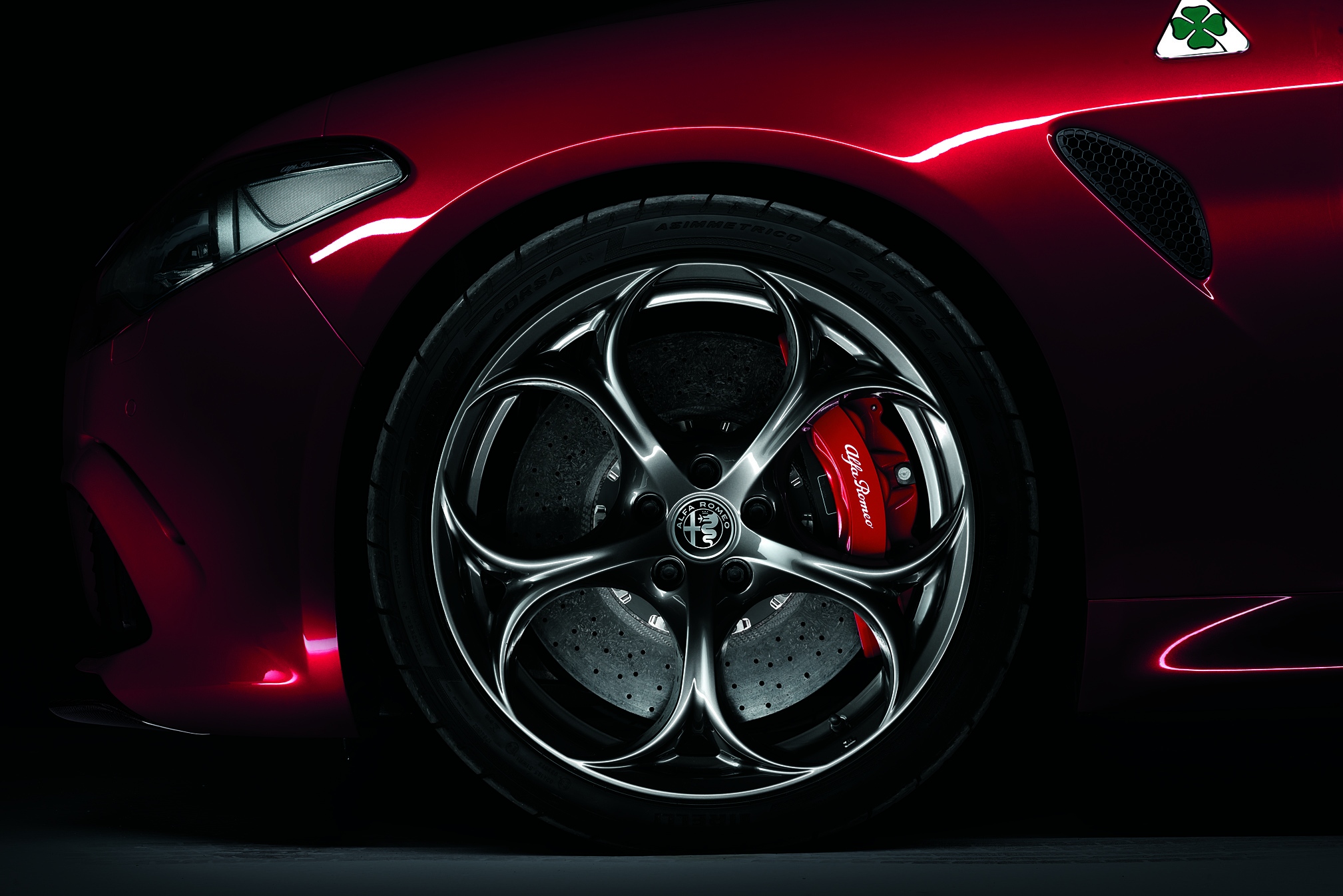 The latest Giulia saloon is intended to address the issues of the past. Consisting of a tidy line-up of 200bhp 2.0-litre petrol-turbo power unit (not coming to the UK for the present), both 150 and 180bhp versions of the all-new aluminium 2.2-litre turbo-diesel and a storming, Ferrari-fettled, 510bhp V6 2.9-litre engined top-of-the-shop model, while scarcely a mass-market machine like the BMW 3-Series, it is intended clearly to worry its Schwabian neighbour. Yet, it needs to be flaming brilliant to nudge the Bavarian from its lofty perch and it cannot rely on charisma alone, not in today’s new car scene.

Interestingly, the UK will not receive a manual gearbox option, as the popular ZF automatic eight-speeder (used by many manufacturers), complete with the inevitable steering column-mounted paddles, will be the standard fitment. If you judge by looks alone, the Giulia might have a fighting chance. Its design consists of very taut lines, fore and aft, with a kicked-up tail and short overhangs that do not require much squinting of the eyes to perceive that the BMW 3-Series is its clear target. 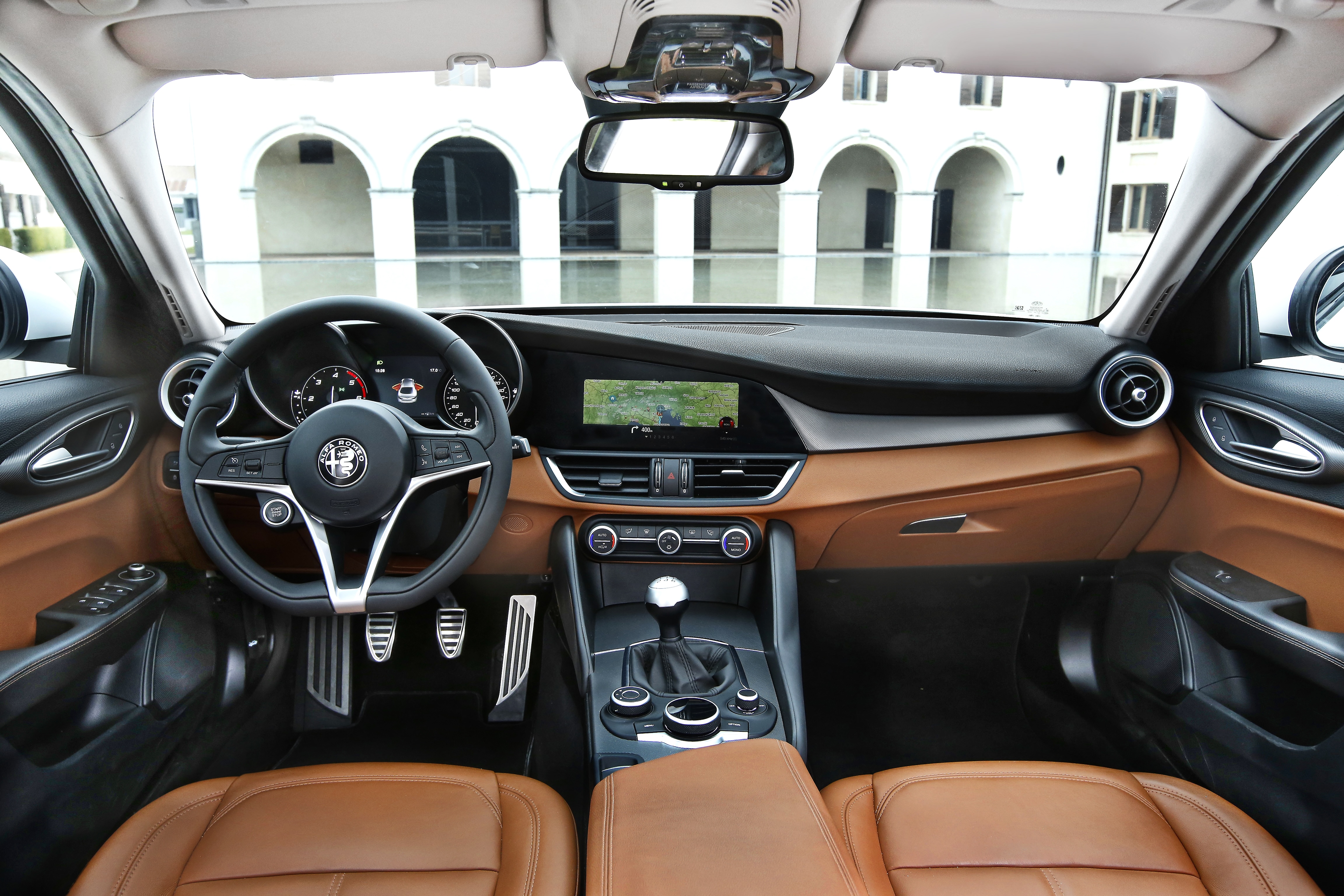 As it also boasts in-line engines and rear-wheel-drive, the first time for Alfa in the modern idiom, having being engineered for 4WD (suitable for some markets but not ours), the BMW aspirations weigh into view again. Fortunately, there is enough Alfa in the mix, from the almost heart-shaped shield grille up-front, to the jewel-like tail-lamp clusters, that potential owners will be in no doubt of their cars’ origins. Even the interior, both cabin and boot, dimensions rival those of BMW, Audi (A4) and Mercedes-Benz (C-Class).

Naturally, this begs a question. As mid-size popularity around Europe is biased towards the premium triplets, is Alfa running a risk by attempting to play the same game that Citroen tried with the C5 model, which even stated its Teutonic intentions in its advertising campaign? The simple truth lies in the affirmative. From a personal standpoint, I can only hope that the innate sense of confidence that seems to have perpetrated FCA (Fiat Chrysler Automotive) will carry off the aspiration that never really worked for Gallic PSA.

The Giulia line-up includes the stock model, Super versions (available with both Lusso and Sport packs) and singleton Quadrifoglio (four leaf clover) trim level for the V6 bi-turbo. Needless to say, the top version has a few typical distinguishing factors, such as extra air-intake slashes on the carbon-fibre bonnet, in the front bumper unit and the flanks, while a raw carbon bootlid blade, stunningly lovely alloy wheels design and four tail-pipes enhance its performance-orientated appearance.

With a posted top speed of 190mph, the hot Giulia will enjoy its diet of BMW M3s, which, unless dealership-doctored (an aspect that can wipe-out any future warranty claims!), will not top their speed-restricted 155mph maximums. The Quadrifoglio is pretty sharp on acceleration too, breaching the customary 0-60mph sprint in a blistering 3.6 seconds…supercar territory. I have no reason to disbelieve the figures and the car’s handling is surprisingly fluent for something so edgy, helped by its front wishbone and multi-link rear suspension. The turbochargers spool-up rapidly and, even with surgically sharp steering responses (when the traction control setting is dialled to ‘Race’), when grip breaks at the rear, the Giulia reacts faithfully and resists chewing at the hands of its driver.

Of course, it is immense fun to play with the top model but as only a few will ever find UK buyers, notably not from the ‘once bitten’ variety, it is the twin diesel alternatives that will find potentially happy homes, in both private driveways and the corporate car park, which Alfa Romeo needs desperately to justify the development costs both for our market and abroad. The Giulia is well equipped to meet those demands and a decent driving position is a sharp contrast to the sometime ‘Italianate ape’ ergonomics of models in the company’s past.

The inevitable twin-cowl dashboard greets the driver, with a large-format sat-nav screen in the upper portion of the centre console. There is an extensive range of adjustability to both front seats and the steering column also adjusts for rake and reach, providing a most comfortable position for most drivers. While the 150bhp diesel is a fine performer, the extra 30bhp of the enhanced version is matched by a whopping 331lbs ft of torque, which results in a 0-60mph time of 6.8 seconds, a 143mph top speed and the prospect of 67.3mpg (Official Combined figure). Towing will be a doddle. 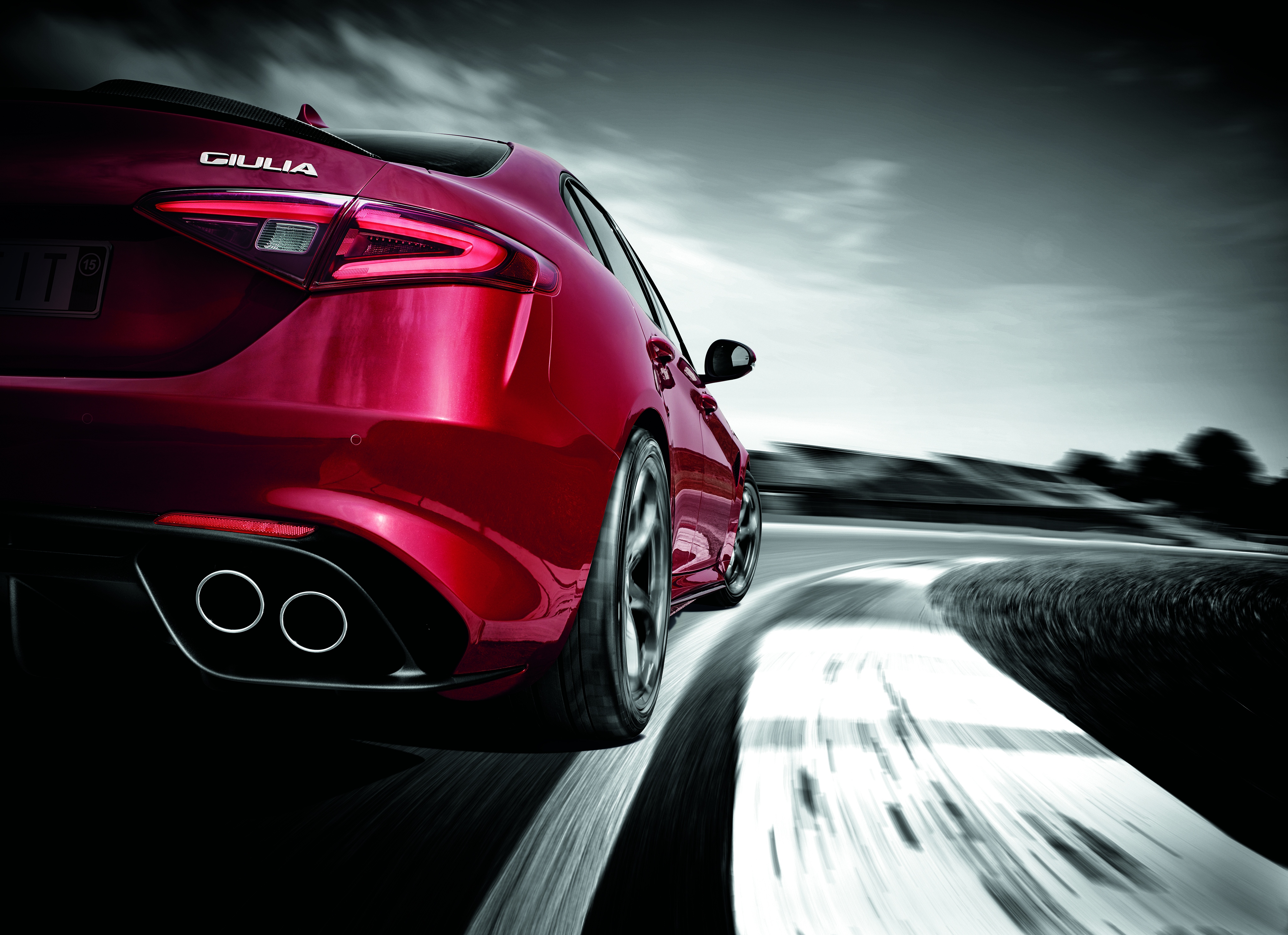 If you are hopelessly ‘in love’ with Alfa Romeo, the news about Giulia will be like manna from heaven. If you like the idea of Alfa Romeo but have been put off in the past, then I propose that you take a wee look at the Giulia, as you might be surprised. However, the opinions of Alfa Romeo critics are going to be particularly hard to turn about. Alfa has an uphill battle to fight but, on this occasion, I get the feeling that it knows it and that its best intentions are not mere pie in the sky…I hope.