Peugeot’s redesigned 2008 crossover meets some, not all, parameters

Loaded with ‘bling’ and heaps of showroom appeal, the French carmaker’s compact ‘SUV’ is moderately successful but Iain Robertson feels strongly that it remains a ‘nearly’ machine that needs significantly more development.

In almost every respect, I harbour tremendous sympathy for Peugeot in the UK, mostly because of its Parisian parentage. As a brand, it warrants its place in the UK market, having earned a long-standing reputation for toughness and durability (despite countless electronic issues that have taken years to resolve).

Peugeot was quite late in coming to the crossover party a few years back, when it took its first tentative steps, with the 4007 model that owed as much to Mitsubishi as any 4×4 developments that might have originated in France. I can recall the dismay that the UK side of the operation mooted, when confronted by the Gallic advertising remit, which depicted the 4007 on a cliff-top surrounded by a glowering sky and clichéd volcanic eruptions.

The French company wanted to imply that its ‘go-anywhere’ model was as tough and uncompromising as any 4×4 could be. However, there was no back-up provided for the 4007 (or its Citroen sister C-Crosser alternative); it was launched, given a few weeks of promotion and, then, unceremoniously dumped. I was privileged enough to operate an example on a long-term test basis, for 12 months. 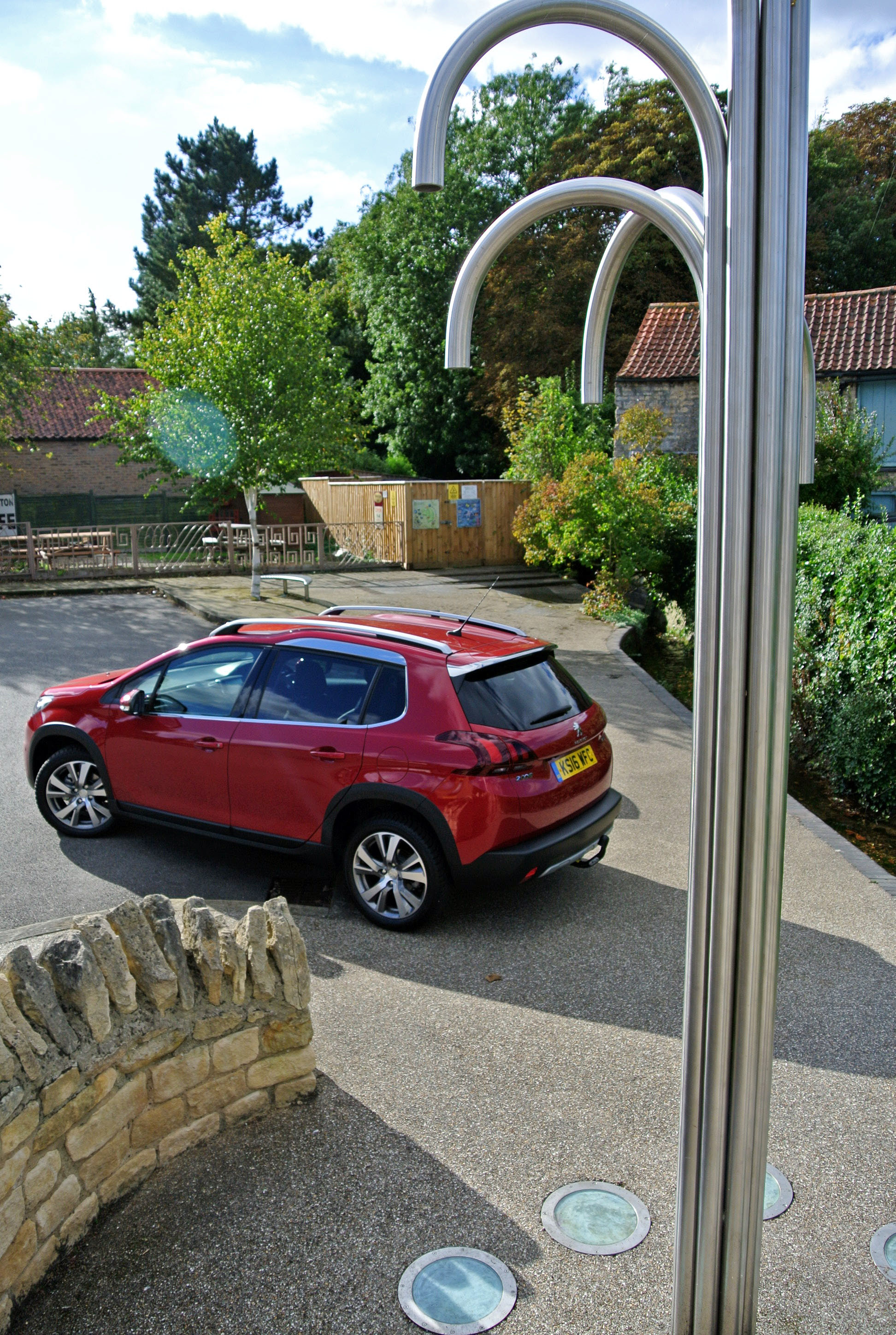 Despite reports to the contrary, the top-spec GT example I lived with was free of glitches and covered over 18,000 miles without missing a beat. In fact, I appreciated its dial-in 4×4 system on wintry roads and revelled in its mile-eating competence for the other ten months of the test period. It possessed a delightful on-road balance and superb performance from its 2.2-litre, 156bhp, 285lbs ft, four-cylinder engine, which returned an average of 38.7mpg over the course of its time with me. I became very fond of that car.

However, the relationship with Mitsubishi was always questionable and there were quality issues, with the Dutch-made products, that seemed to be beyond PSA Group’s capabilities to resolve. I contend that they were more to do with the fact that the car was emphatically not French and, thus, the Parisians were not exactly going to go out of their way to remedy the situation…oh, come on, we all know how the French can be.

With the 2008, introduced in 2013 (if you can pardon this numerical mayhem) but recently revised most thoroughly, it was a different scenario. As the mainstream 208 would not have an SW equivalent (as the 206 and 207 models did beforehand), the 2008 would fulfil both estate car and crossover requirements to intended perfection. Built in north-eastern France, at the Mulhouse plant, it was Gallic to its core but close enough to Germany and the full promotional might of the company was placed behind it, unsurprisingly with a Dakar, rally-raid, competition version as part of the make-up.

The original UK press junket took in an artificial ski slope in the West Midlands, which was used to demonstrate the car’s strong traction and simple dial-in multi-surface strengths. It was impressive from the outset and, despite its carryover cramped cockpit, more of which in a moment, it offered a decent, practical load space and much of the dynamic competence of its smaller 208 relative, with some ingenious technology chucked in for good measure. 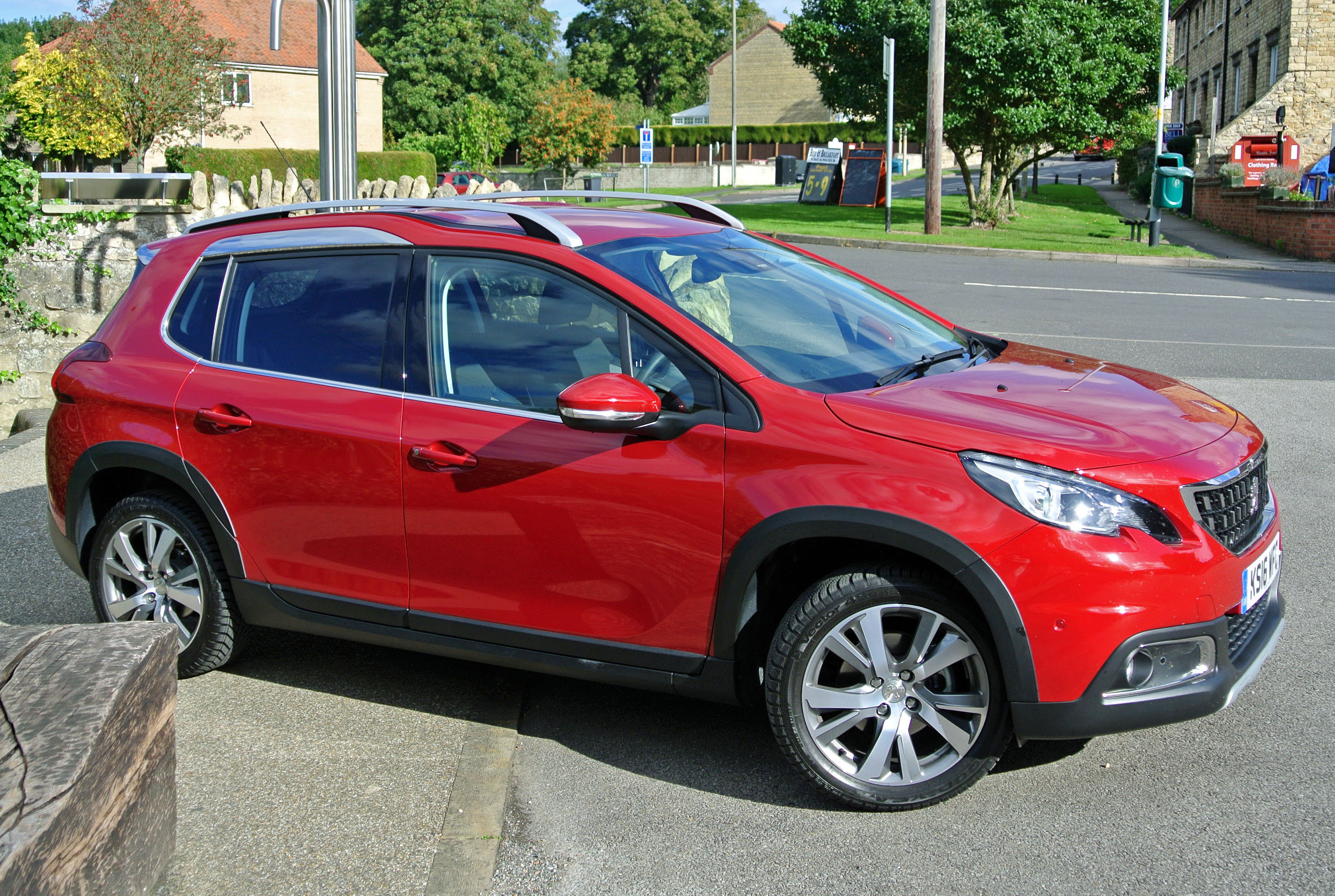 Complete with what appears to be a British television advertising campaign, the latest version of the 2008 looks somehow grittier, tougher and significantly less compromised than its forebear. It is an impression aided in no small part by the offset of the most attractive alloy wheels, now clad in all-season tyres, with their distinctive tread pattern, while the car seems to have been jacked-up a little over the original, courtesy of the black cladding, adding further strength to its SUV aspirations.

Apart from the overly-fussy radiator grille design, which almost apes the nonsensical frippery of the Range Rover grille, I rather like the strong C-form chromed outline that runs along the flanks, up the C-pillars and stops above the rear passenger doors in a broadened band. It is stylish and different, focussing on the higher rear roofline and highlighted by the alloy roof bars. The ‘cat’s claws’ appeal of the rear lamp clusters and the equally feline style of the headlamps suggests that Peugeot’s recent, more stable design language is being exercised most fruitfully. 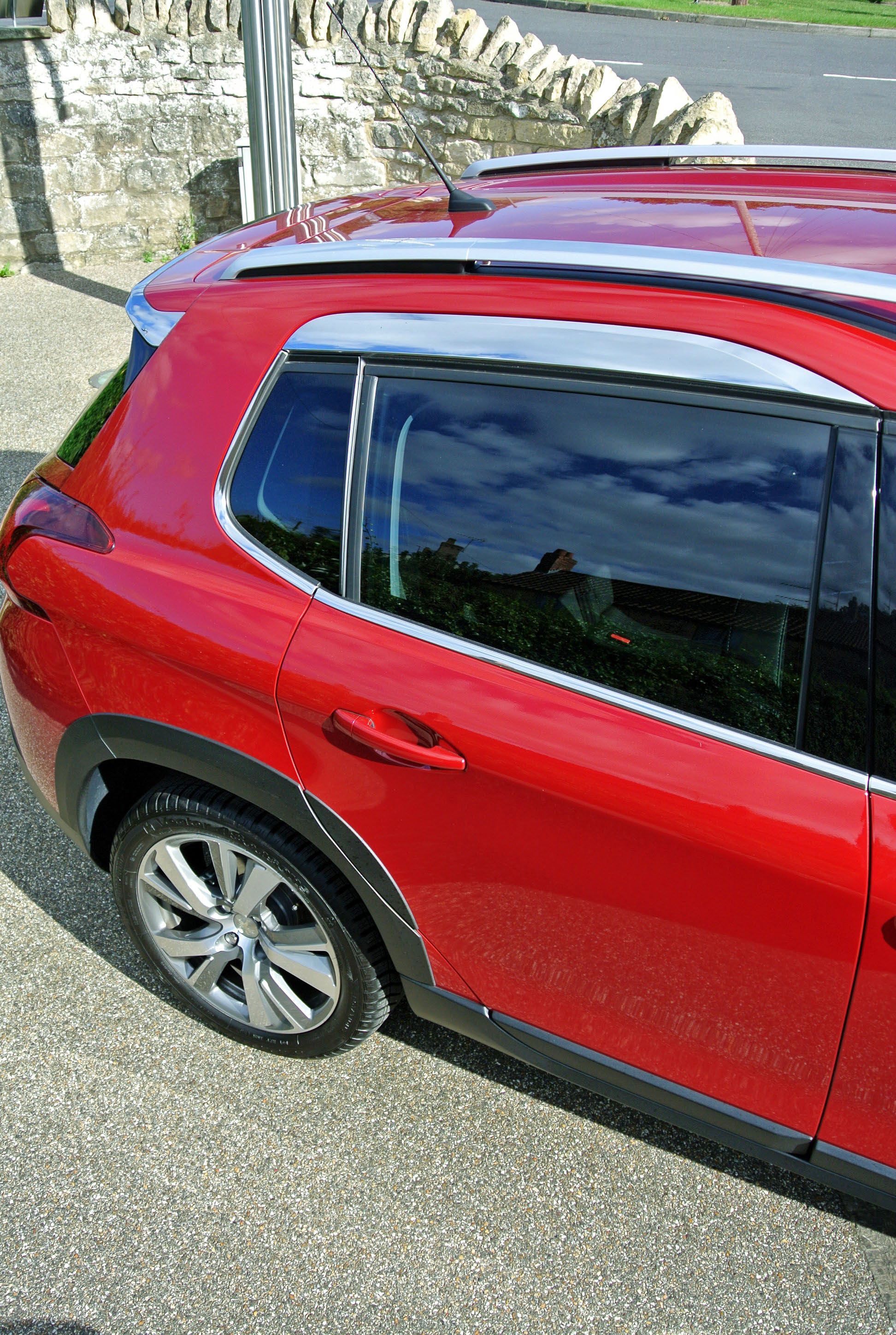 However, despite looking most promising within the cabin, with the extensive applications of high quality alloy and shiny plastic mouldings, their magpie appeal is lost, when attempting to obtain a comfortable and supportive driving position. To a certain extent, I am not unhappy about the lack of downwards adjustment of the driver’s seat, as it would highlight to an even greater extent the poor design of the driver’s footwell (a common issue in both French and Italian motorcars, where insufficient care is taken to accommodate the taller and bulkier northern European frame, or conversion to right-hand-drive, which both nationalities appear to be averse to, despite needing exports to the UK). It is the main reason why I would never buy a French motorcar, as neither my feet, nor legs, are catered for.

It is a great pity, because much of the 2008’s appeal lies within its otherwise fairly spacious cabin, despite the pinched-in feeling above shoulder height. The details are delightful, especially the treatment of the centre console and even the main instrument binnacle, which both look and feel fabulous. You might also notice that I am not mentioning the small diameter, leather-clad steering wheel, nor its daft positioning and, if you are less than 5’ 10” tall, then you will be eminently contented with the way the 2008’s interior has been proportioned. 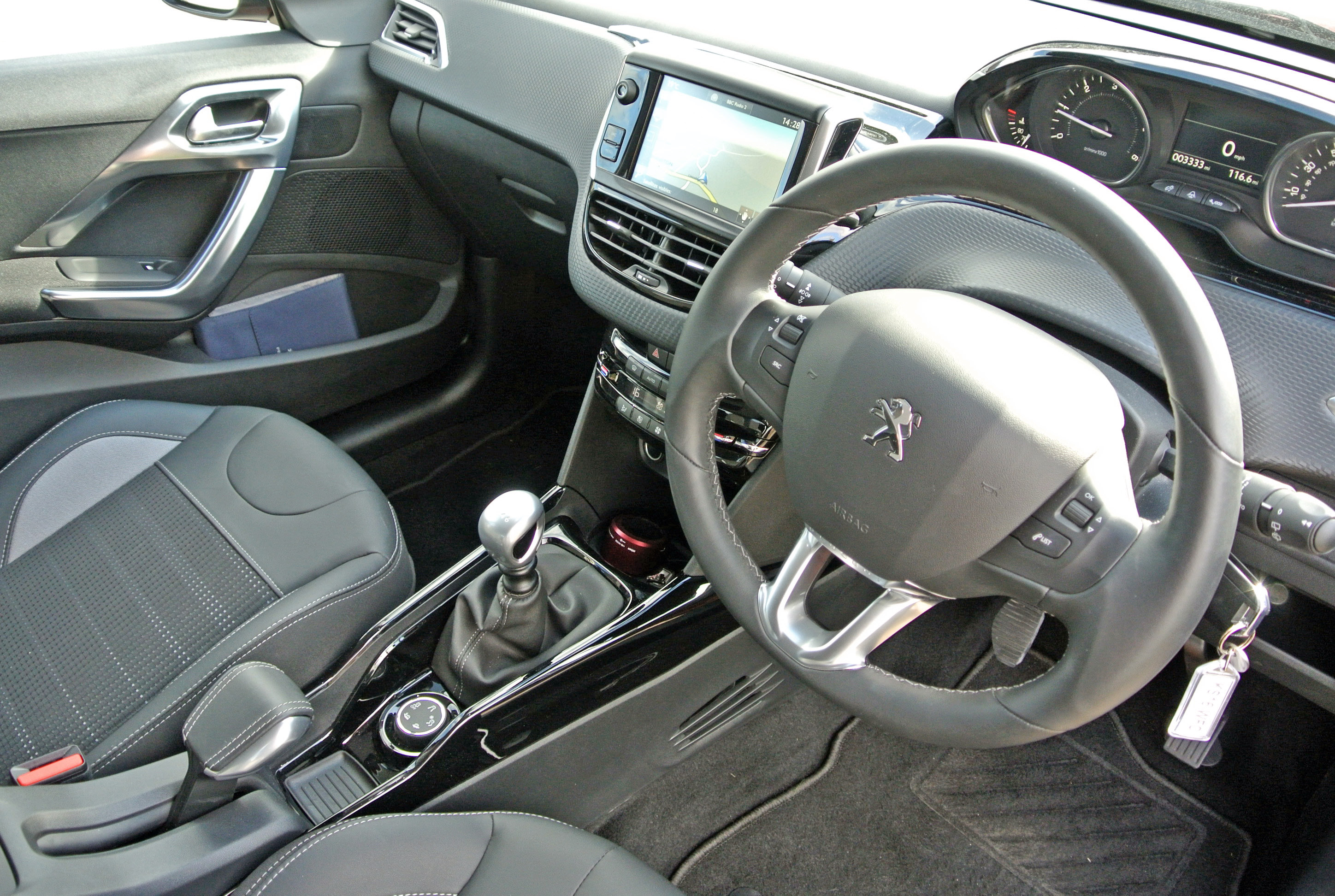 The test car is in Allure trim (one from the top GT-specification), which qualifies it for the largest (17-inches diameter) alloy wheels, the wheel arch cladding, the unusual laser-cut headlining (with backlighting?), Grip Control (its amazingly proficient traction system), auto-on wipers and lamps, in return for a £19,220 investment. Factor in £450 for the sat-nav, £200 for the reversing camera and £500 for the Park Assist and you have the test example. It is quite keenly priced for the class.

Powered by the largely familiar BlueHDi 1.6-litre turbo-diesel engine, in test form it develops a modest 120bhp, with a decent 221lbs ft slug of torque, yet is presently road tax free (look out for the changes in April 2017), with an exhaust CO2 emissions figure of just 96g/km. I know this engine of old and it presents a really strong case for ownership, being capable of despatching the 0-60mph sprint in around 9.3 seconds, with a top speed of 119mph. Its strongpoint lies in its fuel return and, while the posted 76.3mpg is not realistically within the reach of the average driver, most should be more than contented with around 62-65mpg. 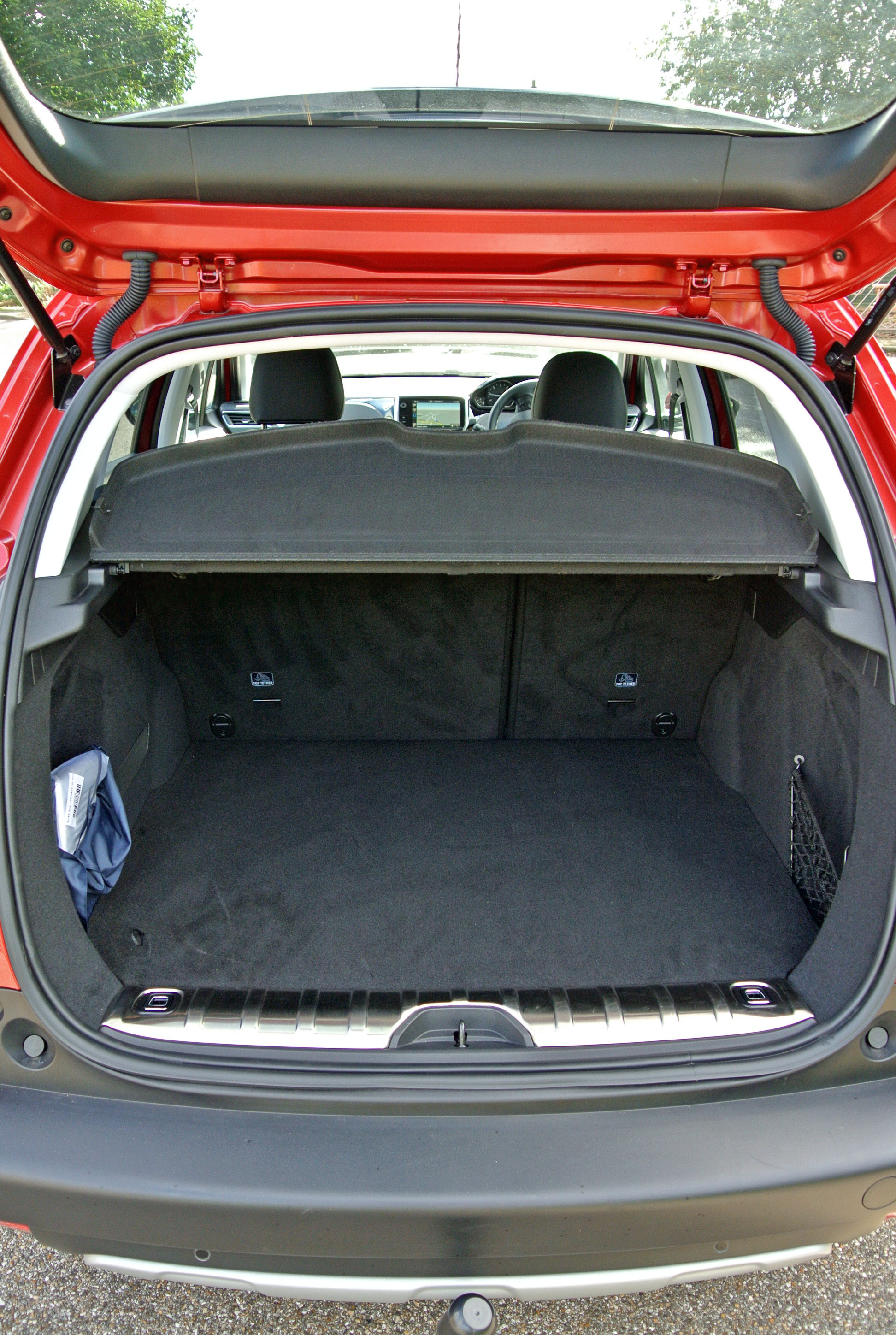 The 2008’s on-road behaviour has been improved with the latest versions. Its Grip Control system differentiates between snow, mud, sand and normal conditions, the small dial located just behind the gearlever also enabling an ‘Off’ setting, as a means to remove all stability and grip capabilities of the front differential and return control to the driver, as long as the speed does not exceed 30mph. Although I had anticipated some extra tyre noise from the all-season covers, due to their more ‘open’ tread design, it was minimal and grip levels were reassuringly good.

Standing six feet and six inches tall does not help my case, I shall grant you, but that still does not mean that Peugeot can continue to get it so wrong on the ergonomics front. After all, I have been living with a Skoda Citigo for the past three years and the manner in which its interior has been ordered is exemplary. Personally, I have always preferred Peugeot to Citroen, especially in more recent times, but the company really needs to engage with a ‘taller, bulkier dummy’ for its interior proportion design team. I think that the 2008 presents strongly and its showroom appeal is great but Peugeot really needs to ask itself, whether, or not, it is reaching out far enough to potential customers. There are plenty of tall Europeans that would say ‘Non!’.