In reviewing a new and quite different kind of computer mouse, journalist Iain Robertson found that familiarity would be its greatest asset, because re-adapting to using a pen in his right hand proves to harbour significant physical benefits.

For the best part of sixty years, or perhaps I should adjust that to state forty-to-fifty years, my connection to a pen, pencil, or other writing instrument has been total. Truth be known, I would be unable to do my work without the tactility of holding such a device between forefinger, thumb and middle finger.

Recording devices have seldom worked for me and I never take an electronic device into an interview, because it might cause conflict with TV/video recording hardware, let alone other Bluetooth and connective equipment. To be frank, I prefer a decent propelling pencil, although the latest fibre-tip pens do work with greater fluidity than the much-used invention of Hungarian journalist, Ladislas Biro (the clue lies in the name).

In an argument about which came first, for many youngsters, it would be the computer mouse; for me, it is the writing instrument. Due to my personal physicality, standing two metres tall and with extremities to match, the vast majority of ‘mice’, as their plural seems to be known acceptably these days, create a mobility compromise for me…they do not fit my palm, they are simply too small, which leads to cramp and that popular disease of the 1990s, RSI (Repetitive Strain Injury). 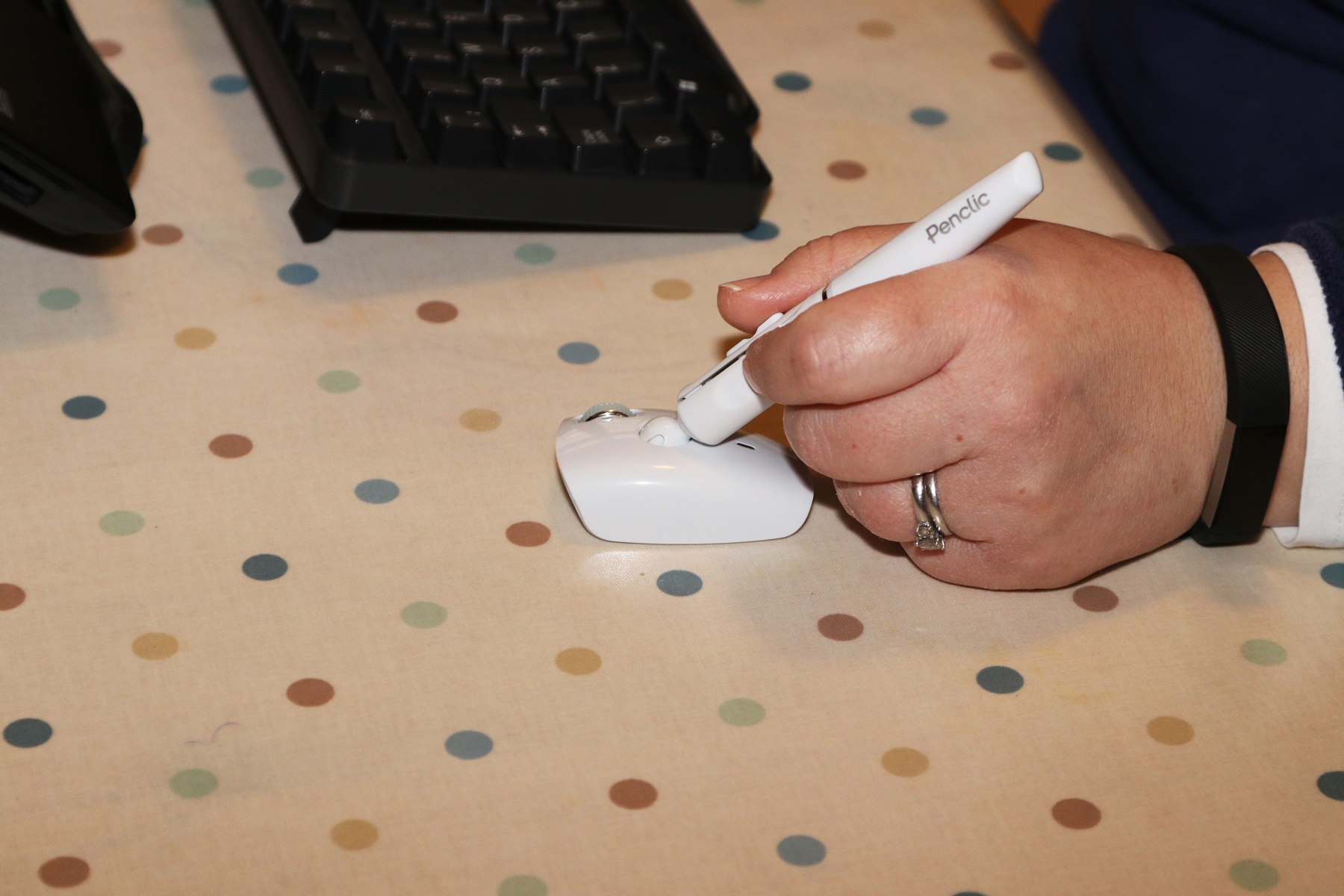 However, apart from some really weird looking, ergonomic devices, which are still produced for (understandably) users of average stature, believe me, I have tried them, the alternatives have been exceptionally thin on the ground, well, on the mouse-mat anyway. Therefore, when a firm, Penclic, launched a new product that falls to hand so easily and conveniently, my ears pricked up and I was keen to sample its Bluetooth enabled B2 pen-mouse.

Without reinventing the wheel and utilising the natural hand movement associated with using a pen, or pencil, Penclic fits perfectly and delivers in equal measure. As you might have guessed by my opening gambit, I am not exactly in the first flush of youth (maybe, the second), which means that ‘new tech’, however attractive, often ends its short life in the old waste bin. Penclic appears to be surviving the cut and there are some very plain reasons for it.

Having inserted the (supplied) rechargeable AAA battery into the base unit and switched on the device, it was consummately easy to establish the Bluetooth connection between ‘new-mouse’ and my PC. An eerie green LED glow confirmed that all-systems were go. Due its Bluetooth connection, the first noticeable aspect is the lack of cabling between mouse mat and PC, in fact, Penclic works well over ten feet away from the computer, not relying on a mouse mat, which has its advantages at times. If you need to recharge the device, the supplied, extensible cable can be plugged into the PC’s USB port and, from nearly ‘flat’, it can be ready to use in around four minutes.

To be honest, it was not easy to operate at the outset, mainly because I have become so familiar with the archetypal mouse that trying to equate which control did what proved to be far from immediately logical. In some ways, it is intuitive but its other functions left me bamboozled to begin with. Yet, as I worked the Penclic, I was not only able to swipe and glide, using the free movement of its base, but I even discovered how to handle it, without accidentally clicking any of the buttons, a very important issue.

The five primary functions, or left, right and centre click, plus forward and backward browser buttons, soon become intuitive and the base unit also contains a scrolling wheel that happens to work naturally…eventually. What I found hard to accept at the outset was the extreme lightness of the device…the pen only tips the scales at 1.6oz and its stubby construction stands a mere six inches tall. Yet, after using the device competently for the past couple of months, I can tell you categorically that the stress in my right hand no longer exists.

In performance terms, it is very quick to react and 100% accurate. The connectivity is secure and Penclic can be used on a PC, laptop, or palm-held computer, using Microsoft Windows, Linux, or Mac operating systems. It is application flexible as well as being ergonomic and durable to use. For typical business, design, or engineering use, it will make whisking between screens and flicking through online pages simplicity itself. Mind you, it is premium priced at £79.99, although you might save a few Pounds buying it online. Scandinavian made, which should come as no surprise with its beautiful design, its practicality, health benefits and ‘talking point’ value has sent my old mouse flying into the WPB.