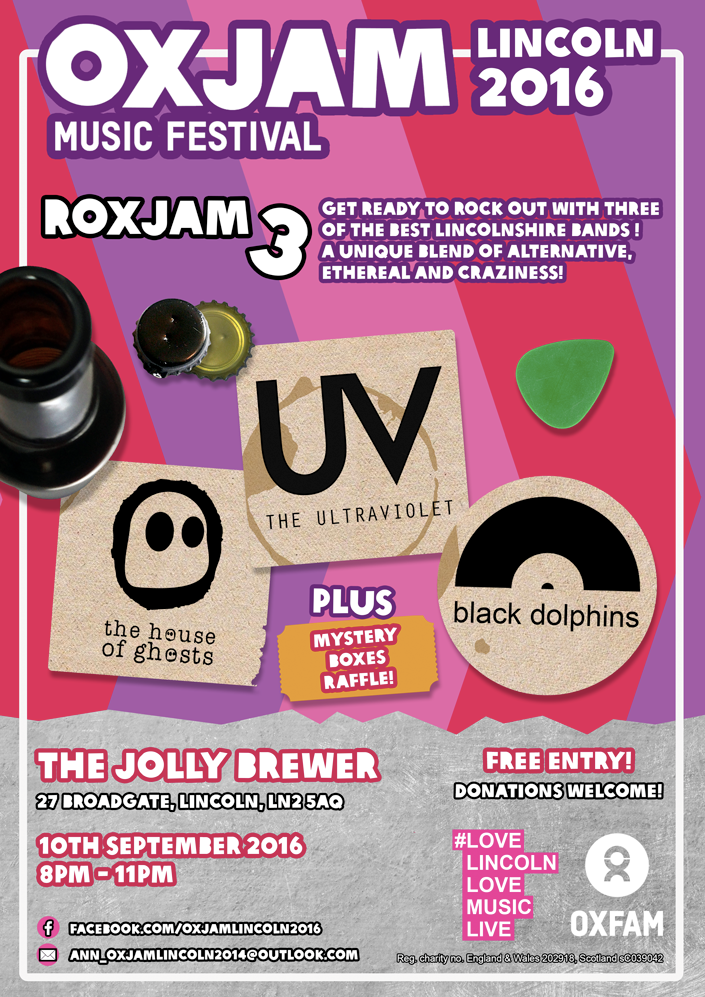 Oxjam Lincoln 2016 returns for the team’s third consecutive year fundraising for Oxfam through multiple music events in the heart of Lincoln. The team raised in excess of £1,800 last year through 12 music events during August – October and this success saw the team finish third place out of over 350 gig makers nationwide. This success shows the amount of work, energy and passion the small team of volunteers contribute but also the kindness and generosity of those who have attended their events.

Oxjam Lincoln 2016 focuses their efforts on 5 events this year, and this year marks the 10th year of Oxjam Music Festival. Their second event is ROXJAM 3 which is annually held at the Jolly Brewer and this year will be on 10th September from 8pm and is free entry.

As with all Oxjam Lincoln’s events, this event showcases the best of local musicians and this event specifically is a ececletic mix of indie rock, ethereal rock and a bout of crazy antics from the headliners! The acts confirmed are The Ultraviolet, The House of Ghosts and headlining will be The Black Dolphins.

Oxjam Lincoln continues to be overwhelmed by the amount of acts and the high quality of bands and musicians interested in performing, as Oxjam Ann, the coordinator explains:

“One of the most enjoyable but also hard parts of this is choosing acts to perform and obviously disappointment of those who we are unable to book. We have made some great friends and contacts over the years but we have to keep the events as fresh as possible for our audiences as there is a great wealth of talent out there in Lincoln and Lincolnshire.

The Ultraviolet, a four piece band from Boston are an example of this, the guys opened our ‘I.Dentify 9 LIVE’ last August at Kind. We were struck by their energetic performance. We do come across a lot of talented musicians who we want to bring back and we keep a close eye on their progress. We have seen The Ultraviolet’s progression and they have featured on BBC Introducing, embarked on their own tour and created their own video and have gone from strength to strength. We feel it is only a matter of time that they will become a well known band.”

This event also sees a welcome return of The Black Dolphins, who were one of the first acts to perform in 2014, but they return with as much style and craziness and goes without question will rock at the Jolly Brewer!

There will be a raffle during the event with all funds going towards Oxfam; all donations are gratefully welcome as with every £1 donated – 84p directly goes into Oxfam’s emergency aid and campaign work by Oxfam.

The remaining events for 2016 include ‘Oxjam Cabaret’ at Madame Waffle on 30th September, ‘GIRL POWER! Sing Out Sisters!’ at The Scene on 14th October and ‘Roar Liquor 2’ at Liquor on 15th October.
This year to reflect Oxfam’s campaign work, the team are emphasising and raising the awareness of Girl Power and equality for all with their all girl gig on the 14th October and this event will take place at The Scene.

“The idea of ‘GIRL POWER! Sing Out Sisters!’ began as a cheeky wink to the anniversary of the Spice Girls this year, but everyone knows the story of Malala Yousafzai and her influence to empower other women to stand up for their rights and equality. The work of Oxfam is to make sure women have the chance to learn or build their skills to start their own businesses in order to provide for their family and better themselves.”

If you are interested in finding out more about Oxjam please head to their Facebook page Oxjam Lincoln 2016 or email ann_oxjamlincoln2014@outlook.com