While the original Renault Scenic of 1996 was a genuine innovator that captivated buyers, states Iain Robertson, the latest version not only turns heads but makes rival products look positively dull.

When you consider the number of innovations made in the past century, it is little wonder that pollution levels increased to new peaks, somewhat out-of-step with product development cycles. The introduction of man-made products that consume natural resources inevitably should come as no surprise. Yet, these days, governments rail against such innovations, after the fact, despite benefiting from them wholesale.

Slowly but surely the industrial sector is cleaning up its act, as we course at unabated speed through the early part of the New Millennium and the motor industry, upon which many countries rely for important commercial reasons, including taxation and employment, is in the vanguard of futurism and protecting the planet.

One of those innovators was Renault, the Gallic carmaker that is deeply entrenched in the British car buying psyche. Introducing a family of models, all wearing the Megane monicker, was a daring step that included three and five-door hatchbacks, a convertible, an estate car and a new class of multi-purpose vehicle (MPV) that would shake up the entire new car sector. Complete with aircraft-style seat trays for rear occupants and storage bins set into the floor, the Scenic five-seater became the family transport gamechanger for a number of generations. 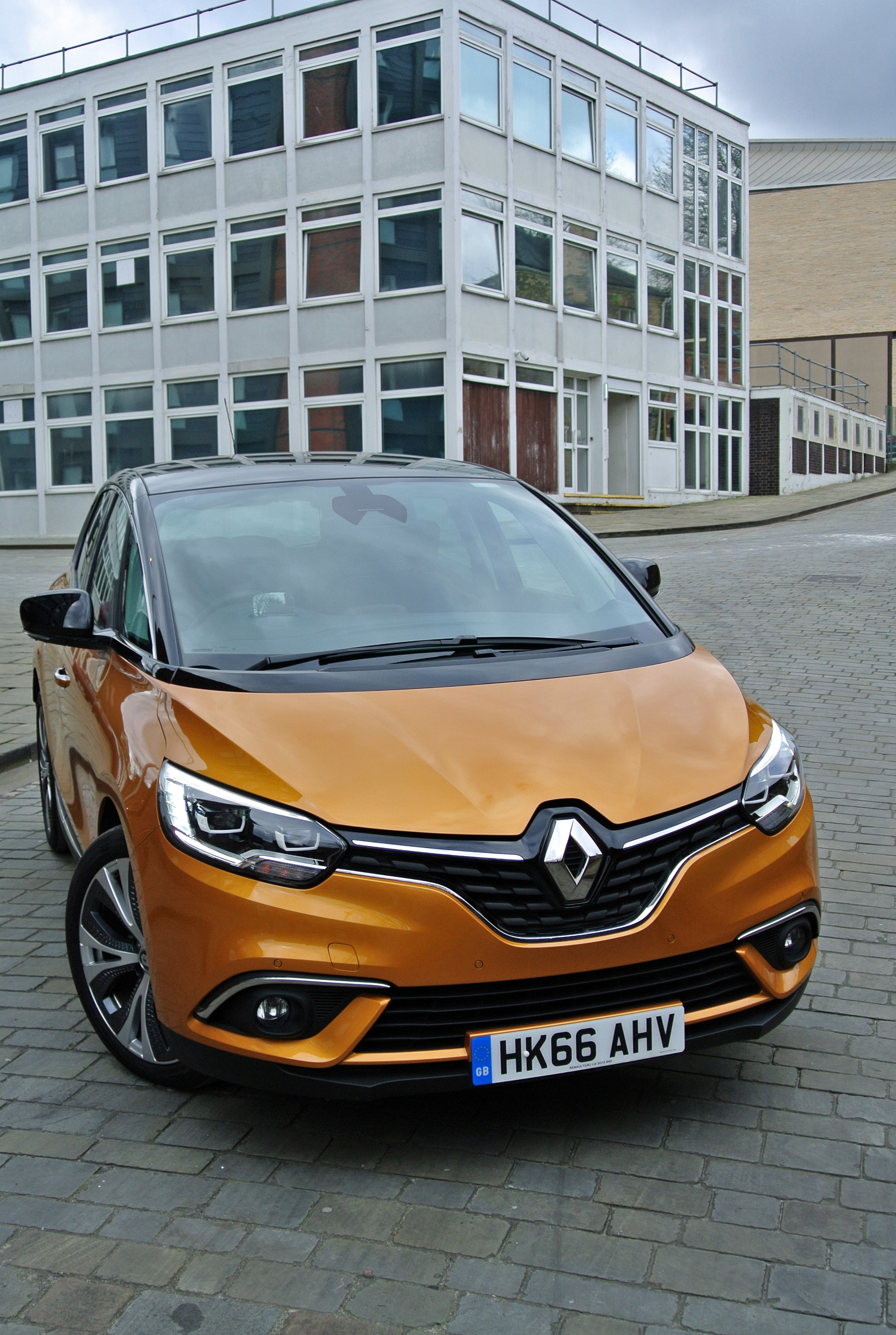 Now into its fourth iteration, Renault appreciated that ultra-competitiveness from its European and Oriental rivals was having a dumbing effect on a market sector that belonged almost exclusively to it. A fresh view was essential and much like a first-class run of engaging models that started with the latest Clio, then the Captur and the Megane, the now standalone Scenic deserved to introduce fresh appeal to snatch customers back to the brand. The latest Scenic achieves that goal by raising expectations onto a markedly higher plane.

Naturally, the Honey Yellow paint finish of the test car serves purpose on the eye-candy front, possessing a depth of finish that is verging on ‘concept car’, rather than regular family transport. Set-off by beautiful 20-inch diameter alloy wheels that look unaltered from the design studio stage, the new Scenic has a street presence that is both engaging and memorable. The body is eminently dynamic in its outline, pinched neatly around the midriff, with the introduction of a darker sill treatment, allied to the beginnings of a haunch that is as muscular as an Olympic athlete. Yet, it is eminently purposeful, from its short nose, to the large glazed area, which concentrates unashamedly on the car’s primary role as a people-carrier. 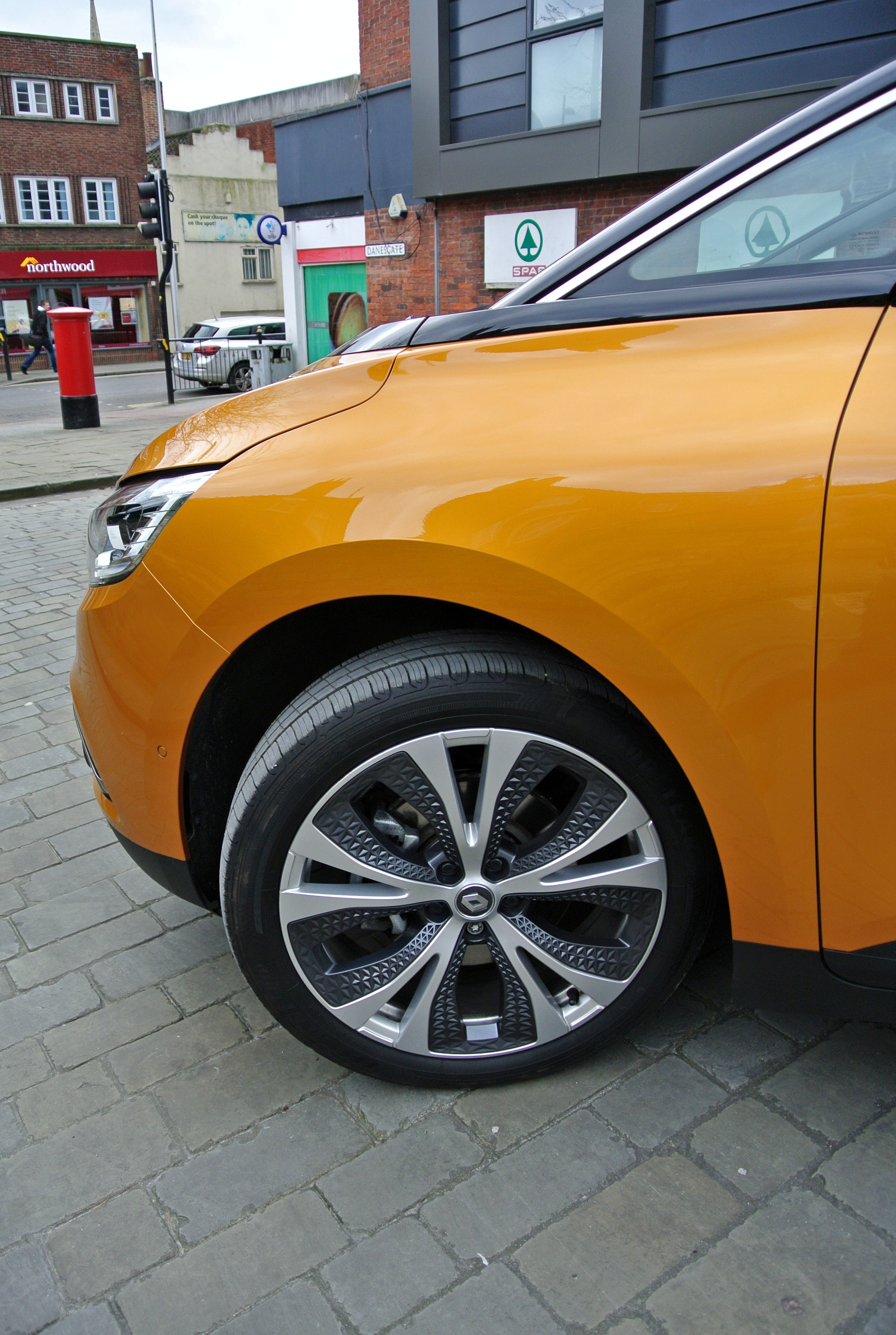 Cracking open the driver’s door is a sense of occasion, the eye being greeted by high-class detailing that has become a Renault norm of the past decade. Yes, it is dark grey inside but it is not in the least gloomy, an impression aided in no small part by the full-length, tinted, glazed roof, which does feature an electrically operated blind. ‘Soft touch’ is the order of the day, from the compliant dashboard mouldings to the door caps, some wearing saddle-stitched details that enhance the high quality impression.

The driver’s seat can be manually and readily adjusted every-which-way, thanks to controls that are not hidden from access and will not scrape knuckles painfully. The steering column adjustment enables fine tuning to be carried out and the resultant driving position is not only safe and commanding but exceedingly supportive and comfortable, not merely for short hops but also for more extensive motoring expeditions. 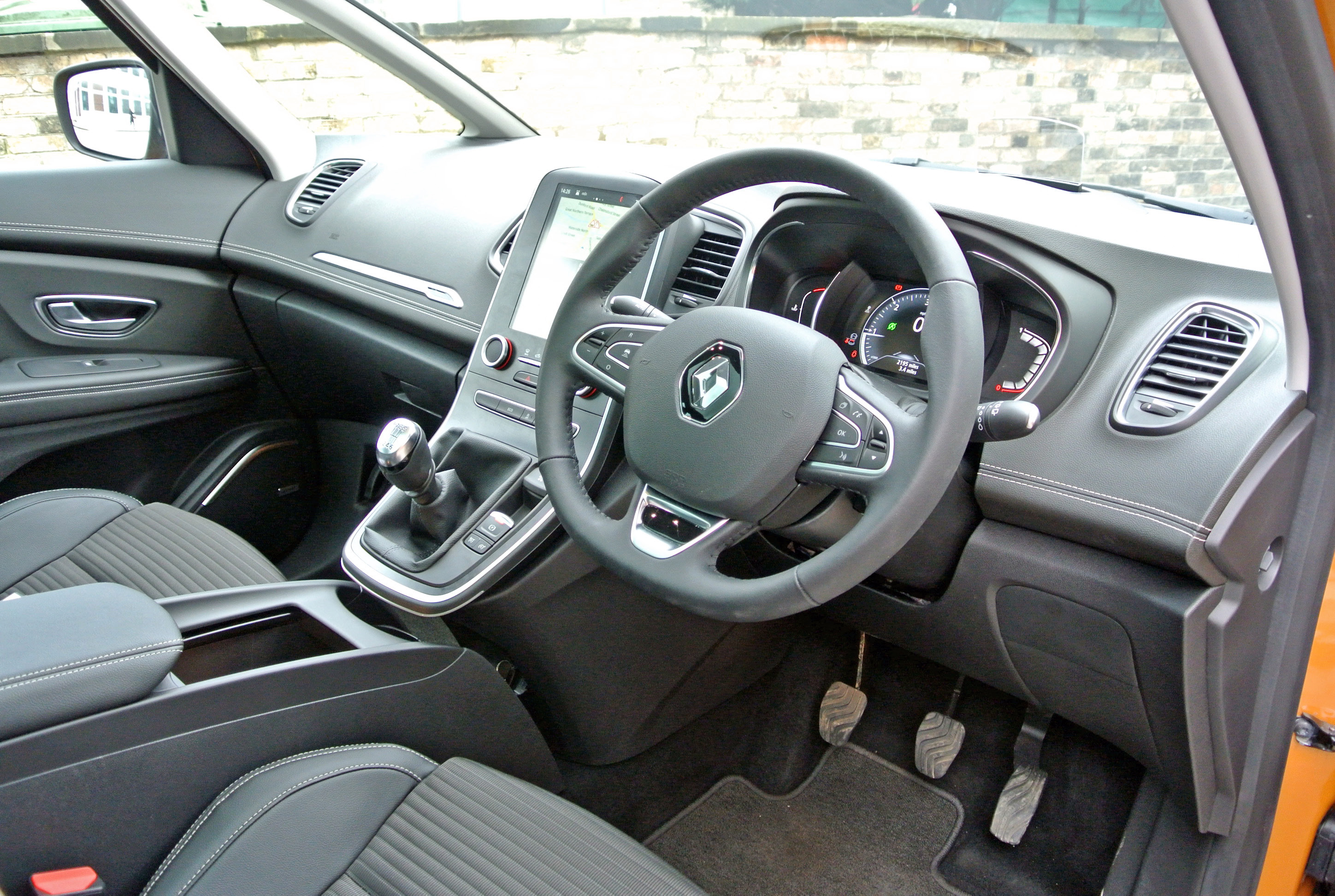 All of the stalk controls, many of which are familiar Renault fayre, fall easily to hand and the lack of buttons and dials on the dashboard supplements the air of sophistication that Renault wants to convey to owners. Fortunately, the portrait format, centrally located touch-screen is not like the current sluggish and unresponsive unit found within PSA Group rival products. It works effortlessly and semi-logically through its various screens that cater for both style of presentation and functionality. The user soon becomes familiar with the different menus and on-screen slide controls, dabbing speedily from one page to the next, before arriving at a malleable format that meets expectations. 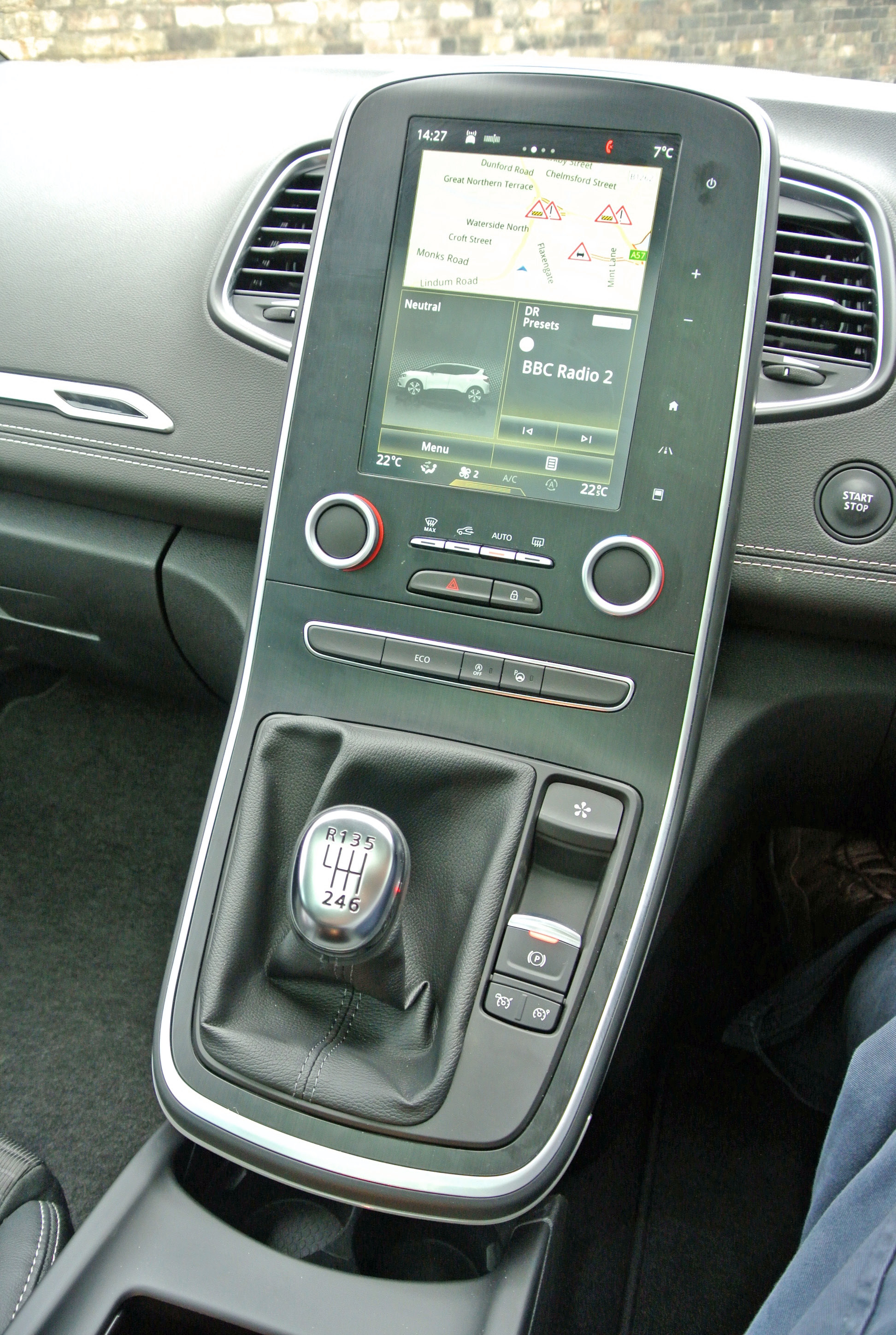 Between the front seats is an illuminated, sliding, storage box-cum-armrest that will become a repository for most in-car paraphernalia. Beneath its lid is a selection of USB ports for charging and plugging-in additional music sources, mobiles and other modern electronica. In its front edge is a pair of drinks-holders. Incidentally, the ambient interior illumination, courtesy of slim strips at the base of the centre console and in each of the doors, can be colour changed using the ‘Multi-Sense’ personalisation programme in the centre screen.

Rear seat occupants (up to three) are treated to similar levels of comfort, as up front, and not the after-thought that some carmakers seem to levy on them. There is plenty of width and both leg and headroom in abundance, although it is only the outer pair that gain from the beefed-up trays that emerge from the rear of the front seatbacks. Incidentally, all of the rear seats can be folded instantly from the front seat, or by pushbuttons in the nearside rear of the boot, to turn a large load area into a simply massive, flat and unobstructed deck. 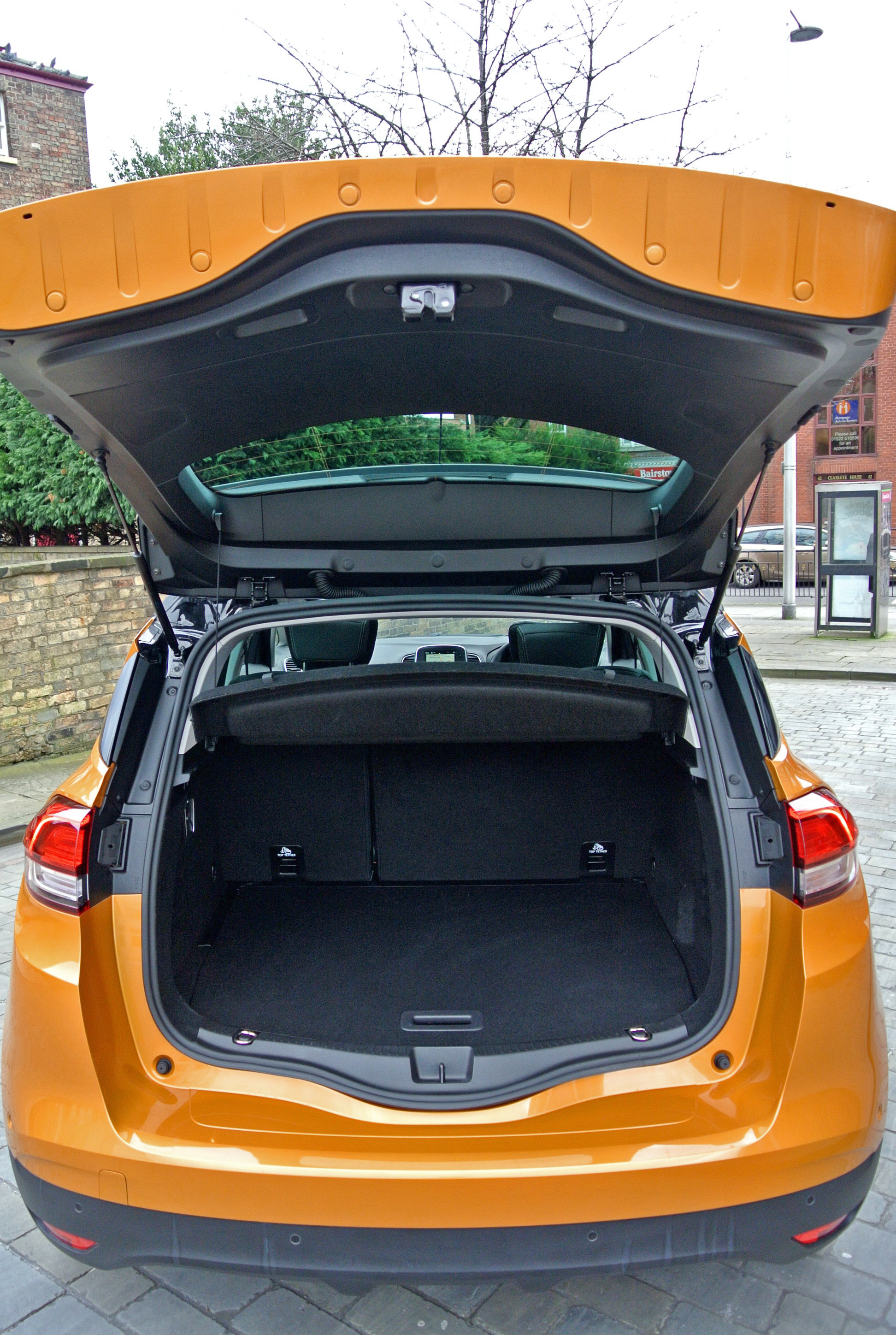 While there is a good choice of both petrol and turbo-diesel engines available for Scenic, which is surely useful in these increasingly pollution-conscious times, the test car is powered by the familiar 1.5-litre dCi engine that develops a modest 110bhp and a more important 192lbs ft of torque. Very few petrol engines will deliver the stated 72.4mpg of this one, although I only managed to attain a consistent 54.3mpg, with which I was more than satisfied.

While CO2 emissions (from the end of March 2017) cease to have the same relevance placed upon them by The Exchequer, you might care to note that they are pegged at a lowly 100g/km. Yet, the performance from this refined unit is truly superb. The Scenic will crack the 0-60mph benchmark in a modest 12.1 seconds, before topping out at a stated 114mph. However, it does feel quicker, a factor that lies squarely at the door of turbocharged diesel punch.

The driver is aided by several means of eco-propositions, not least an upshift light in the TFT instrument display behind the steering wheel. More advanced settings exist within the central display screen but a slightly cliched leafy twig highlights a gentler driving style to maximise fuel economy. Also ahead of the driver is an adjustable, head-up display that hosts the traffic sign recognition, lane departure, distance control and, of course, the parameters for automatic emergency braking (with pedestrian detection). To be fair to Renault, it has always served its customers well on the safety front, having been a pioneer of tyre pressure warnings, as well as other safety aspects in its cars. 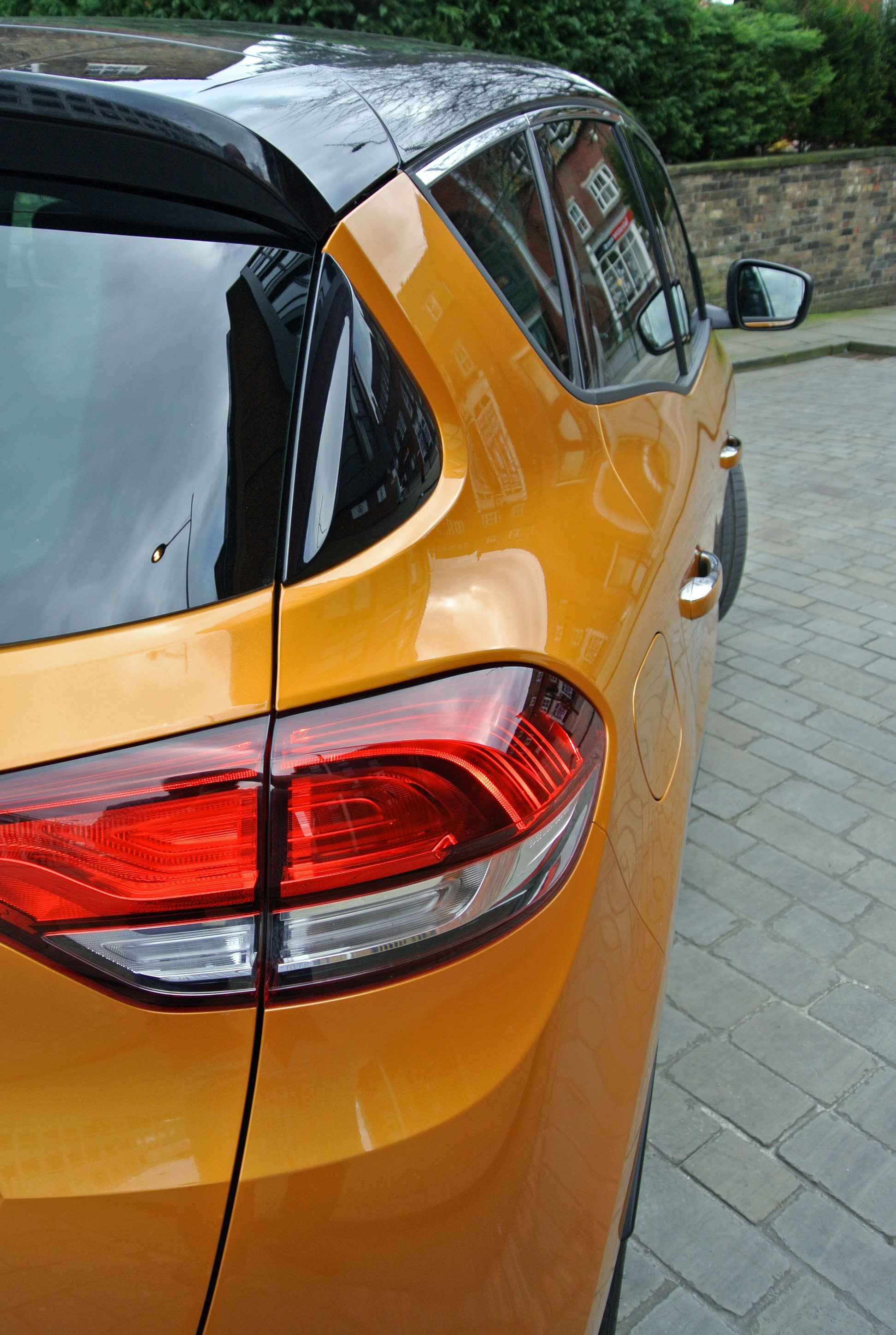 The impression of interior space from the driver’s viewpoint is substantial and the latest Scenic feels almost as large inside as the somewhat grander Espace. However, it is a very easy car to point and park, either parallel, or perpendicular (helped with an automated parking programme), and soon shrinks around the driver both in-town and out on the open road. Its ride quality, while firmly compliant is excellent. Body roll is well contained and the steering responses are faithful to driver input.

Price-wise, the new Scenic is pitched right into the middle of the five-seat MPV sector, in this case at a moderate £25,445 in Dynamique S Nav form. However, factor in £545 for the silkily reflective metallic paintwork, £500 for the LED headlights, £500 for the Park Assist, another £500 for the adaptive cruise control (part of the Safety Pack), with £500 for the upgrade Bose seven-speaker (and sub-woofer) stereo system, which is excellent, and £90 for an emergency spare wheel, and the price tag is whisked up to £28,020. Although it might surprise you, in light of my criticism of runaway new car prices, I believe that Renault is pitching the Scenic at the right rate.

Just as I loved the original, ground-breaking Scenic, I am delighted to say that my fascination has returned for the latest version. It is effervescently stylish, dynamic of both appearance and behaviour, and spacious enough to serve as either sound family transport, or the ideal company car. While the current outlawing of diesel might lead you into contemplating a petrol alternative, there is no denying the low running costs associated with current Renault products.