Tackling the hot/lukewarm hatchback segment with a lower-power, limited edition model, highlights Iain Robertson, should be conducive to good business sense but the price monster rears its ugly head…

Reflecting on the period leading up to the New Millennium, one aspect of marketing was abundantly clear. Branding. The value of the brand, whether it be Levi, Coke, Mini, or Domestos, was being underscored. Judicious branding would generate more loyal customers, most especially were it to carry a readily recognised label.

It remains a most powerful tool in the marketing department’s armoury. Yet, ‘millennials’ are notable for being singularly disloyal. They are part of the ‘informed generation’, over-laden with information and access to it, although their use of it remains increasingly querulous and even questionable.

For those investors in branding, continued strength is the reward, although upward creeping price tags soon reach beyond the purses of the very consumers that the brand was designed to meet. While a moneyed few will have the resources to direct at the brand, its reach becomes more discerning and degrees of ‘exclusivity’ arise, which can prove to be both advantageous and detrimental to the brand.

It is a strange end game, although some sectors of the motor industry are now addressing it in a most fascinating manner. Throughout the 1980s, ‘GTi’ became a label to which many brands sought to adhere. While Volkswagen would protect its twin-letter roundel (VW) with zeal, a trim level, which embodied affordable performance with sporting comfort, was impossible to own…even though most of the potential market knew that VW had invented it.

For a variety of reasons, mostly related to petty crime and insurance grime, the ‘GTi’ handle became toxic during the 1990s. However, the association with sporting prowess remained a priority. Of course, the broader consumer base at which the archetypal GTi was targeted shrank as prices escalated upwards and the lukewarm hatch segment was born.

Mind you, the same escalation in repute and value applies to whatever fresh semi-branding exercises are carried out…it is all part of the commercial machine designed to part the consumer from his available resources. When money is tight, as it is presently, while the horns of personal wealth may be drawn in, the attractive finance deals fulfil the segment growth function.

Seat, notionally the Spanish arm of the grander VW Group, has managed to build a reputation for sportiness that centres on Cupra (an abbreviation of ‘Cup Racing’). While Seat might have been regarded as a ‘value brand’ in its post-Franco developmental phase, now subsumed totally by Volkswagen, it has found price parity with its Czech equivalent at Skoda, even though it is pegged carefully at just below VW mainstream models, allowing Audi to remain unsullied at the premium end of the same classes of product. Its lukewarm equivalent is badged as FR. 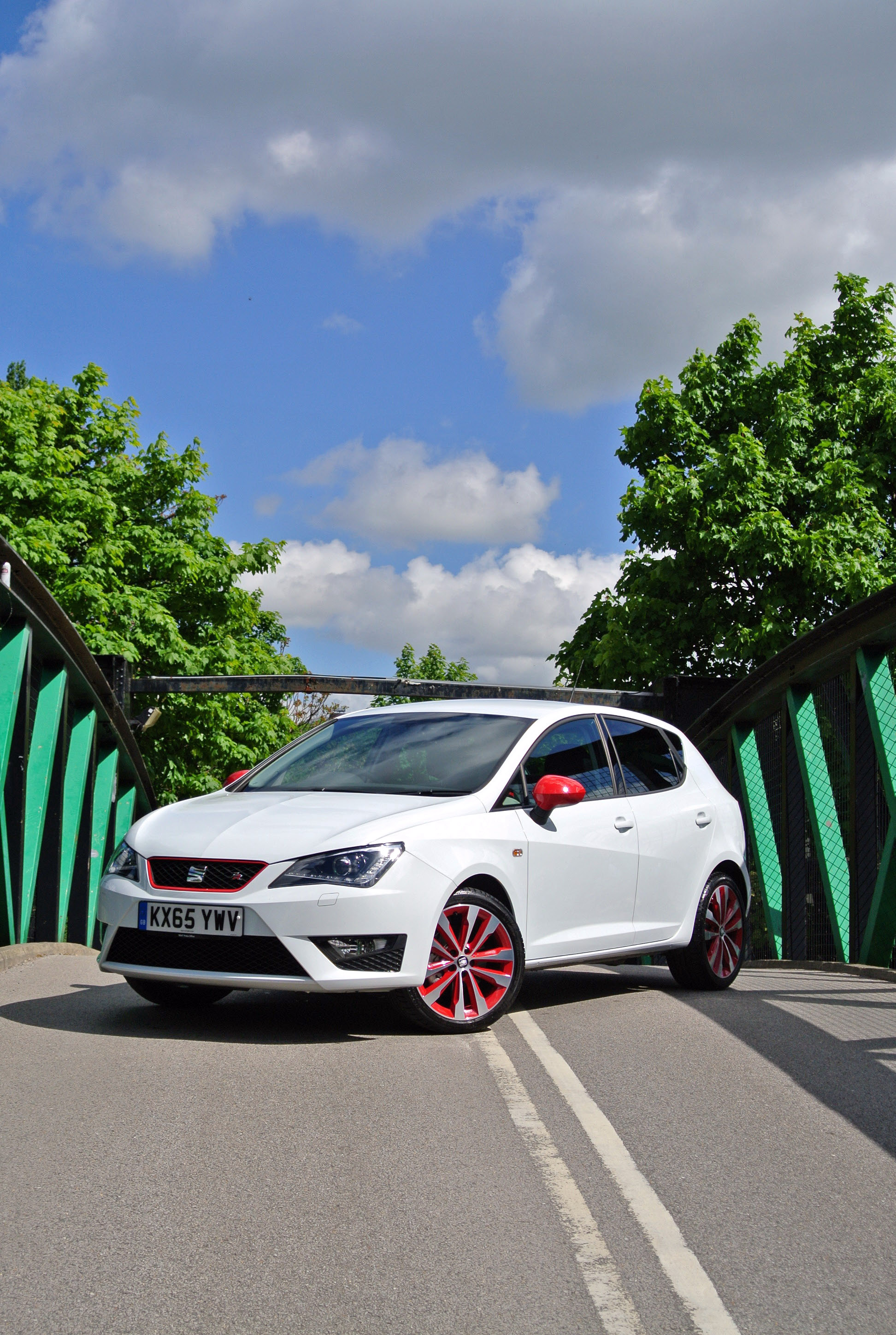 It serves purpose as a sub-brand to Cupra, with more affordable pricing but less of a technological and higher-end performance focus. It has proven most popular. Yet, the escalator continues to move upwards inexorably, which has led to the introduction of even smaller capacity engines that help to reduce the overall CO2 emissions target of the company but, with marginally lower prices, help to forge a new tranche of customers that are intended to develop some brand loyalty by trading up subsequently. FR becomes not just a junior-league GTi, but also a broader means of wearing the sportier badge, with a more frugal power unit. It is a fascinating market approach.

In the Seat Ibiza FR Red Edition 1.2TSi, the appeal of the packaging exercise is everything. The red door mirror covers, the red machined highlights on the 17-inch alloy wheels (which look much larger), red seatbelts, red outline to the radiator grille and red cabin highlights hike Ibiza’s desirability onto a another plane. Of course, that also means a higher price tag and, while the £15,735 model price is acceptable, the old Teutonic trick of bumping up the accessories and options, in the case of the test example by a whopping £2,535, turns the Ibiza into an £18,270 reality check. It is not quite as attractive now, is it? Although, you would be damned rather than slash back the desirable options of a higher-end stereo, Mirrorlink, sat-nav and adaptive front lighting. 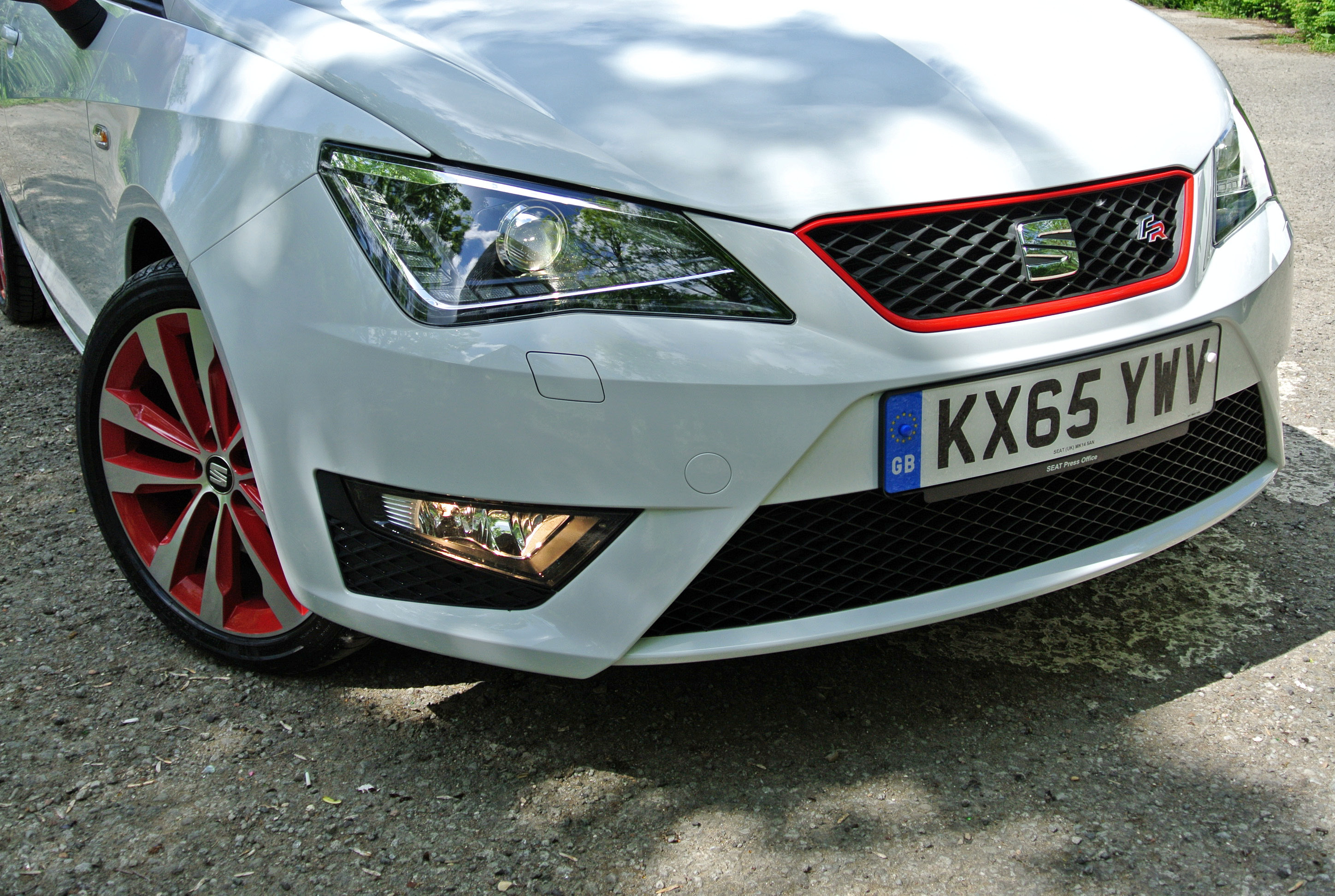 Of course, with manufacturer-underwritten PCPs and business finance options, it all becomes eminently ‘affordable’ all over again, so everybody is happy. N’est-ce pas? I recommend that you look very carefully at the pitched residuals and the payments, before making your choice.

Anyway, powering this great looking little hatchback is one of the smaller capacity, petrol engines from the extensive VW list. To be frank, the 1.2-litre engine really appeals to me, for a number of reasons. I last sampled this unit in a VW Beetle, which proved to be a most happy union. While its 108bhp output is not particularly exciting, the turbocharged delivery warrants moderate interest, in the form of first-rate driveability and a decent performance envelope. However, small motors also equate to tax-friendliness (at present) and the potential of frugal progress.

Seat has not yet adopted the old Lotus principle of ‘adding lightness’ to its models but, tipping the scales at 1,152kgs, it is hardly the chunkiest toy in the trunk. As such, it despatches the 0-60mph sprint in around 8.8 seconds, before reaching a maximum velocity of 122mph, which are impressive benchmarks. Against an Official Combined fuel return of 54.3mpg, I managed a most respectable 52.9mpg on my economy test route, with 43.4mpg in a week’s worth of motoring, and it is worth noting the CO2 emissions figure of 119g/km, which equates to VED Band C (zero cost in year one, £30 annually thereafter).

While a ‘Sport’ button sharpens the dynamics (too much, in view), left in ‘normal’ mode, the ride quality of the Ibiza is tolerable, although, as tends to be the case with too many compact hatches these days, fairly firm spring and damper settings ensure that body roll is minimised, while every imaginable element of road noise, from our ‘broken’ roads network, is allowed to permeate the occupant cell, which can become annoying. It is ironic but a few deftly placed anti-vibration pads around the inner bodywork might resolve the problem to more acceptable levels. 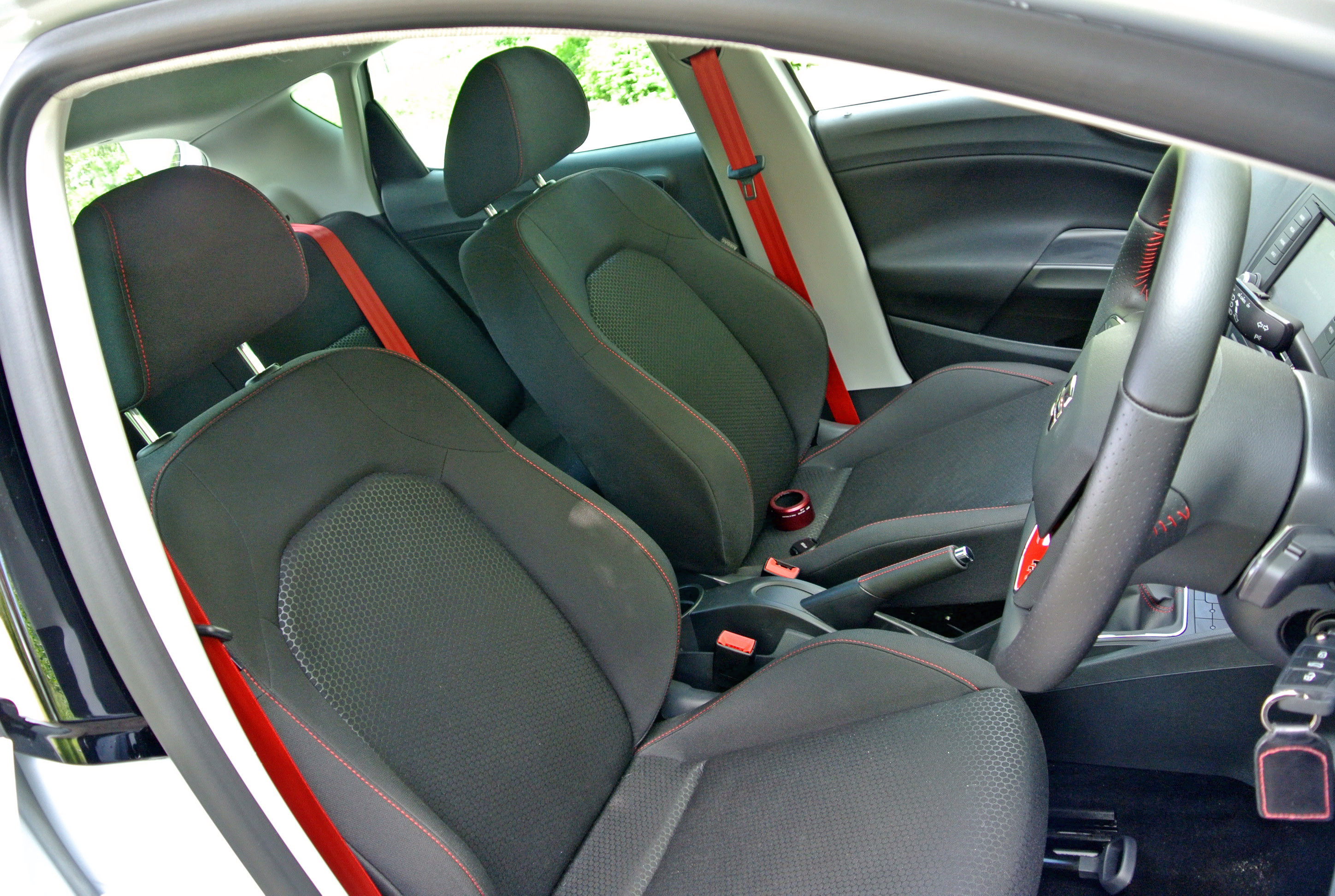 Yet, in line with FR expectations, the electronic power steering is accurate, the brakes crisp and the main controls of the Ibiza remain faithful to input. The six-speed manual transmission helps to fill the inevitable gaps in the small capacity but refined engine’s power delivery, while providing a leggy enough top ratio for easier cruising. The drive-by-wire throttle provides minimal ‘feel’ to the driver’s right foot but familiarity soon breeds.

Being a five-door example adds to the practicality of Seat’s offering but it does restrict access to taller front seat occupants, although, once in, there is a modest amount of space available and the boot is adequate. In fact, the multi-adjustable driving position is comfortable enough for either short trips, or longer hauls. The typical VW Group switchgear and central touch-screen work efficiently and impart a degree of class to the cockpit. 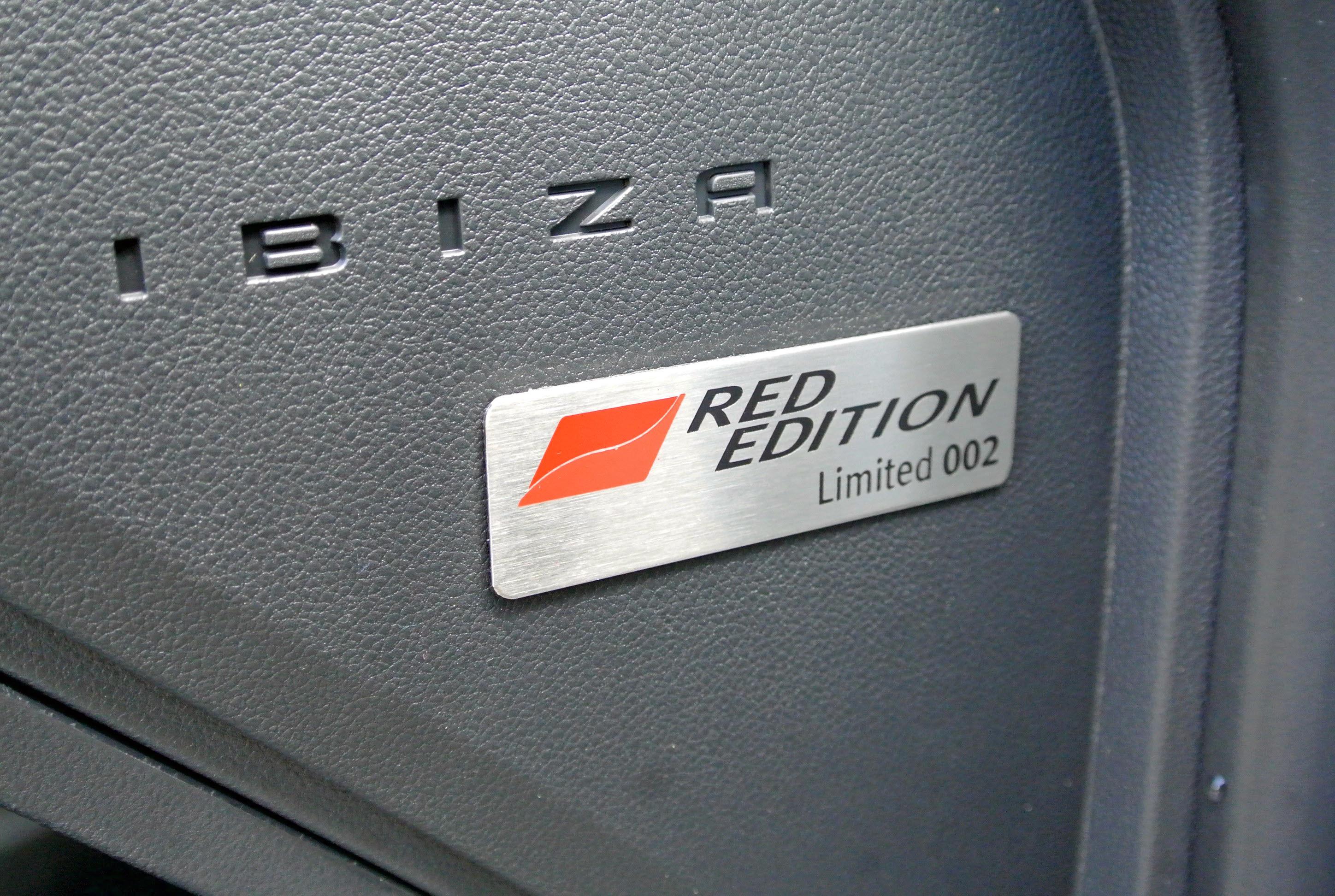 The Ibiza FR Red Edition certainly lives up to Seat’s sporting intentions, although I wish that it were slightly more affordable, as it is priced out of contention with other ‘budget’ alternatives and Seat has not quite shaken off those value-for-money tenets. Yet, for the individual wanting to experience GTi trimmings accompanied by lower operating costs, it meets muster. As a result, it will have appeal to both retail buyers and business users. Therefore, as a marketing exercise, I can declare that the FR works, even if the ‘Red’ elements, which are not unattractive, will be a tad too ‘boy racer’ for some prospective customers, while the pricing remains an issue that needs to be readdressed.