The Giulietta hides its light rather too successfully

But, soft, what light from yonder window breaks? It is the east and Giulietta is the sun!”, according to Will Shakespeare, although Iain Robertson feels that Alfa Romeo’s true position might be closer to the west and the setting of it.

Standing out from the norm can harbour both benefits and detriments. It can make something memorable, even though the memory might only form within those people appreciating it in the first place. Alternatively, because the vast majority of us seldom ever wants to draw attention (a practice best left to dramatic artisans, smarty-pants and swots) a veneer of acceptable averageness should keep maintenance within sensible bounds, an aspect that applies equally to people and possessions.

Speaking personally, as I stand six feet six inches tall in my size fourteen socks (aided immeasurably by middle-aged spread having taken my girth to similar high-maintenance dimensions), I fall into a size classification that should have restricted my progress in so many areas. It does. On narrow stairwells. Entering medieval portals. Driving some racing cars. Buying clothes on the High Street.

Yet, I love compact road cars. I have driven both race and rally cars. I have always lived in older properties. To be fair, I avoid public transport. I import personal clothing and footwear from the USA (only for me, so don’t ask). However, while falling into the 1.5% that is over six feet tall in our country, I am still not quite tall enough to qualify as a ‘giant’, regardless of finger-pointing and the sometimes terrified responses of children, domestic creatures and the elderly. 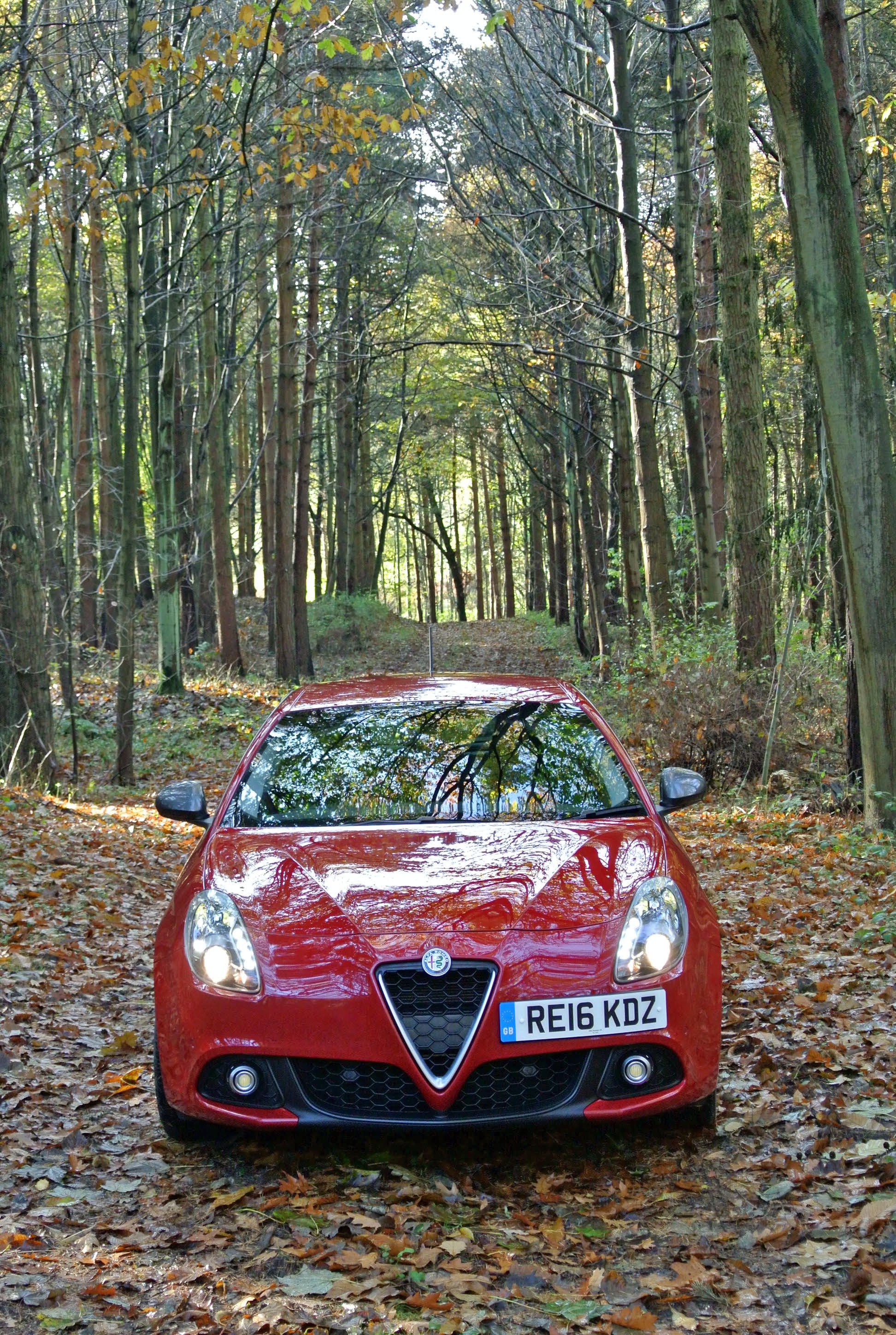 As much as I have always loved the concept of Alfa Romeo, the practice, to me, has always been a restrictive one. There is something inescapably Latin about Mediterranean motorcars, which is both compellingly charismatic and annoyingly hateful. As a member of the taller northern European demographic, I do not own the teensy bum, dainty feet, short legs and long arms of the archetypal Italian. It is also worth highlighting that the French suffer from broadly similar physical attributes and both nationalities embody them into their respective products.

Yet, the Fiat Group (as was; it is now Fiat-Chrysler Austomotive, which does harbour some stature potential) has done its level, if inconsistent, best to appeal to northern Europeans in models as diverse as the Fiat 131 Mirafiori, Alfa 164, Fiat Uno and even the Fiat Punto. However, it always reverts to type, even though I have never quite comprehended the reasons for it. The latest AR Giulietta is a case in point.

There is no denying the style stance, which Alfa managed to corner to perfection in the 156 model of two decades ago. Leaning heavily on an essence of its past, Alfa allowed a Gina Lollobrigida voluptuousness to enter the styling studio, from its signature radiator shell to its bejewelled tail-lamps. Eschewing the straight lines prevalent in pragmatic German products, curvaceousness was Alfa’s new language that referenced a more glorious past. I am delighted to say that AR has retained that direction for Giulietta, as it is a very pretty machine, even though it needs to comply with specific class requirements, such as overall footprint and mechanical layout. 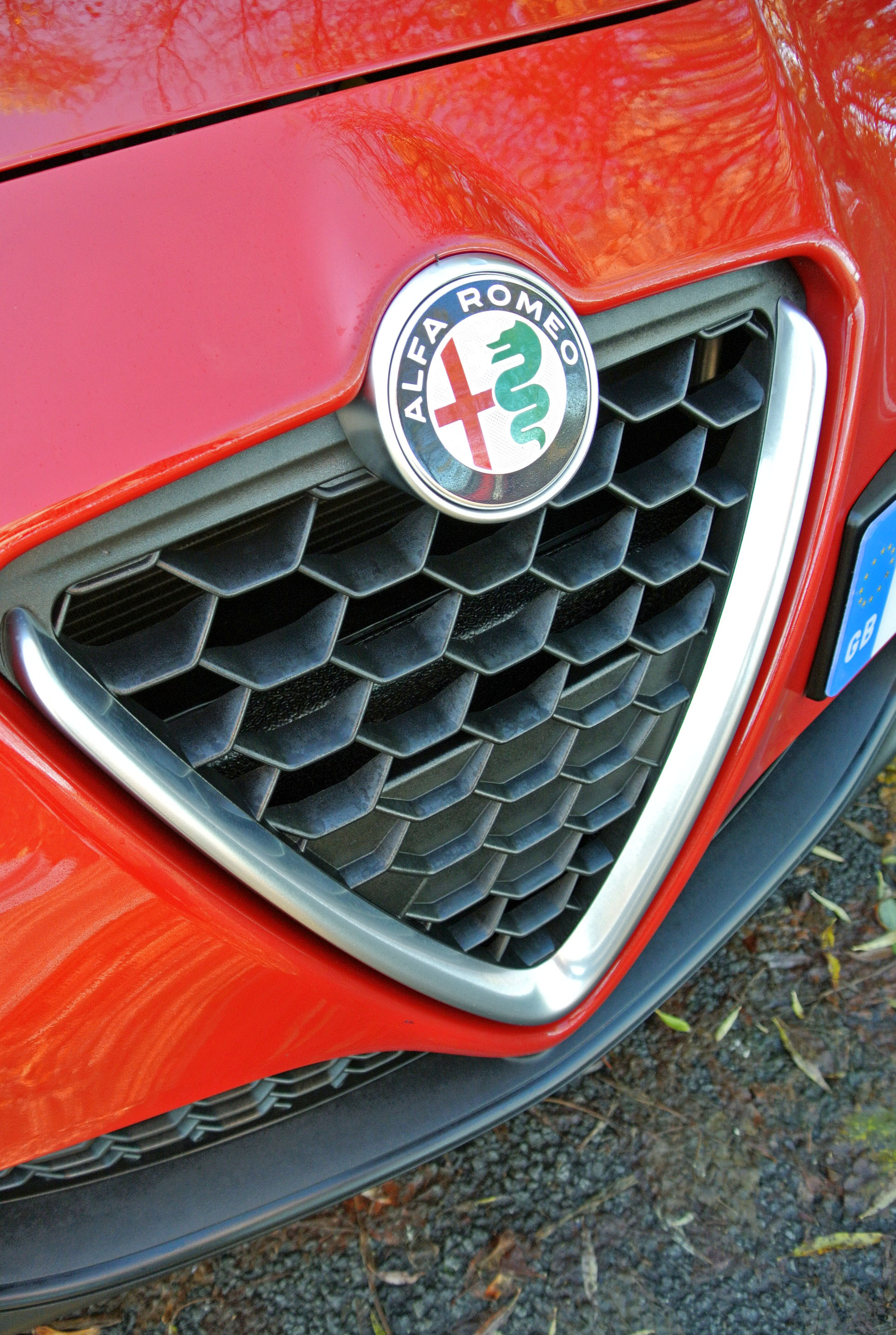 However, that sensual form creates restrictions, because it compromises practicality. There is always a cost implication on the superficial front. Yet, Alfa does try to be practical, as the Giulietta, despite appearing not to be, is a five-door hatchback, as such it is a pity that the cabin is so cramped, both in front and especially in the rear, even though the boot is of moderate proportions. It is not to say that I was uncomfortable driving the car but not being an Italianate ‘ape’ (short legs, long arms), it would never meet the demands of my (on occasion) trans-Continental jaunts, as I would be forced into stopping too frequently to relieve back and upper leg aches and pains.

Mind you, it did not stop me from revelling in the car’s taut handling on several sub-30-mile blasts over the course of a week’s operational use. After all, this is where an Alfa should revel, its inherent talents honed on a series of Aresean jaunts on the demanding twists and turns of the Dolomites. Zipping up to Sansicario, in the Italian Alps, or trawling around Como and its prefectures. Lincolnshire’s back lanes serve purpose.

To be honest, I wish that the interior felt less low-rent than it does for a car competitively priced, in this business-like trim, from £21,150. While there are some interestingly tactile textures, the dashboard is just a large grey plastic moulding that does the cabin no favours at all. The touch-screen in the centre is modern enough and provides easy access to the stereo system, sat-nav and multi-media features, while the trio of rotary dials below it manages the climate control. However, where a useful storage slot might have existed ahead of the automated transmission selector, the USB port and Alfa’s ‘DNA’ chassis control switch fill the space, an aspect that only serves to bolster the cramped impression of the interior. Yet, the comfort levels are excellent, the Alcantara-clad seats, with their brand monogrammed red logos, providing decent support for the spine, while resisting lateral forces. 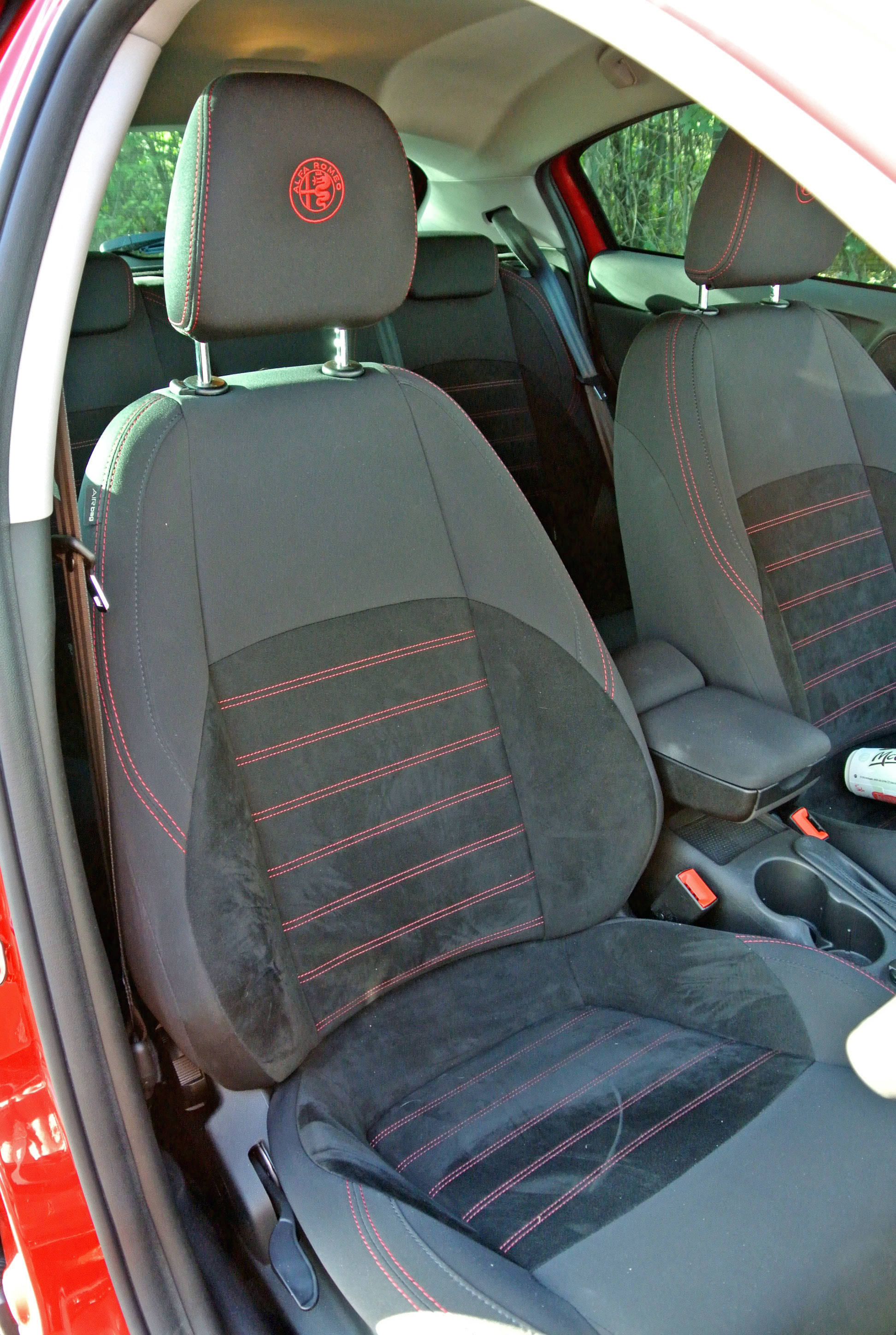 For a fairly unsophisticated platform, the Giulietta makes a decent fist of its dynamics on the open road. The DNA master-switch, which stands for Dynamic, Normal and All-weather settings that adjust both throttle and steering responses, as well as the traction control settings, is best left in ‘N’, as the ‘D’ position also hinders the sequential-manual gearshift patterns to make the car feel far less driveable than it is. In reality, I cannot see the point of it. If Alfa, with all of its historical knowledge and experience of chassis control, cannot get the best from the car, without fiddling with its electronics, then there is something far wrong in its engineering department (Audi take note!). I would prefer to have the space (where the switch is) for my mobile. 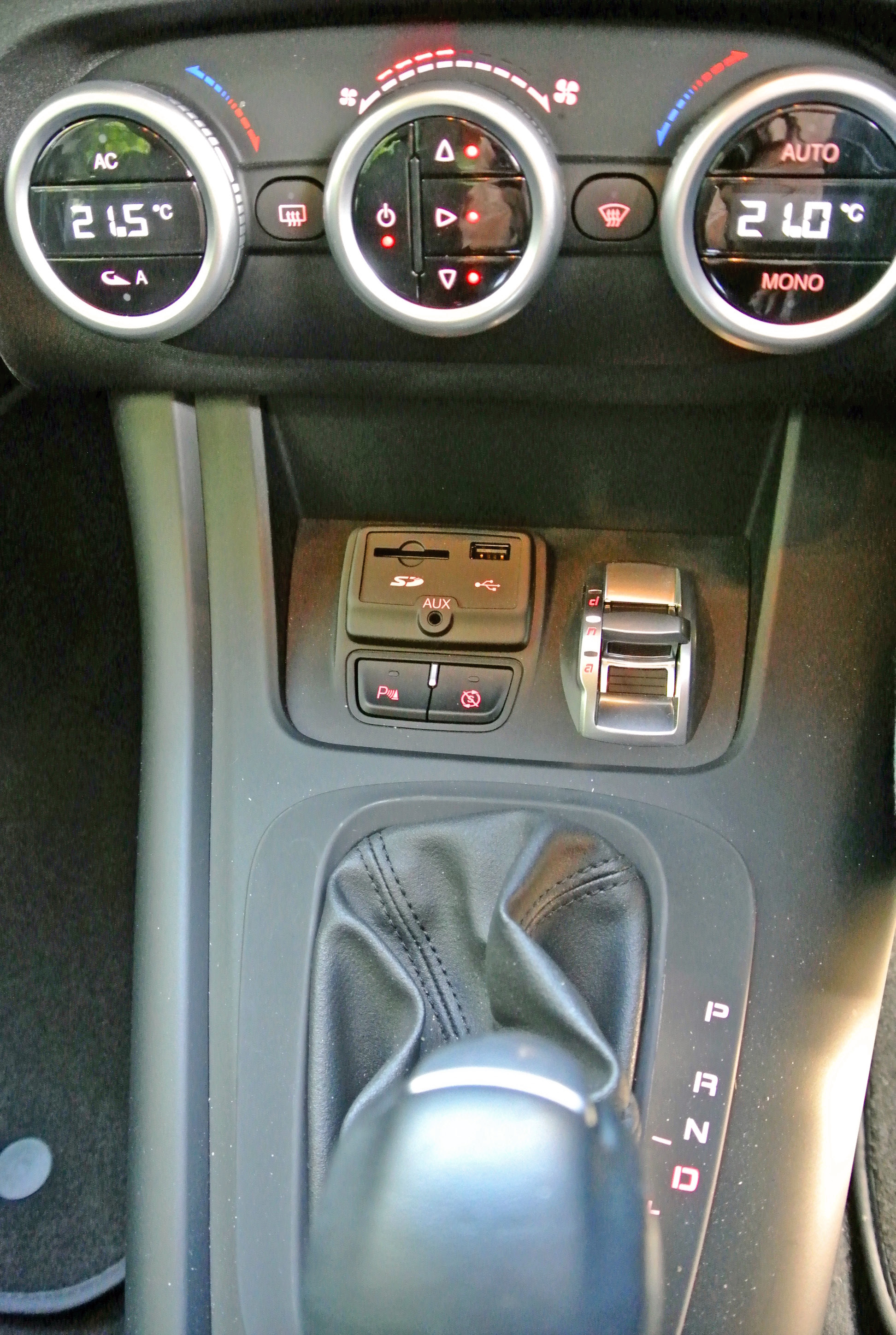 Bump absorption is surprisingly compliant and the torsional rigidity of the car’s body actually allows its suspension system to work with tremendous fluency. Good grip from the 205 section tyres fitted to the gorgeous, five-hole alloy wheels means that even on wet road surfaces the traction control is seldom worried into operation. All-round disc brakes provide assured stopping power in a typical Alfa way. Slightly over-servoed, low-speed braking, abetted by the transmission ‘creep’, can be kangaroo-like, although slashing off higher speeds is not a problem.

Having mentioned the twin-clutch transmission, this latest six-speed version is a development of the company’s original Selespeed, albeit now in twin-clutch form, and is virtually the same as VW’s DSG unit. Shifts can be seamless, although there is more ‘creep’ than with the VW installation and it can become caught out very occasionally by sudden throttle applications. It is mated to FCA’s latest version of the venerable 1.6JTDm-2 turbo-diesel power unit. Although 148 and 173bhp versions of the 2.0-litre lump are available in Giulietta, this 99g/km (CO2) engine delivers a modest 119bhp. It is enough to despatch the 0-60mph sprint in around 9.9 seconds, with a top speed of around 121mph. More important than the ‘zero’ tax rating is its stated  74.3mpg (Official Combined) and although 55-60mpg is more the norm, in a typical mix of motoring, pedal a Giulietta diesel with any brand-related enthusiasm, and that figure can tumble disturbingly into the mid-30s. 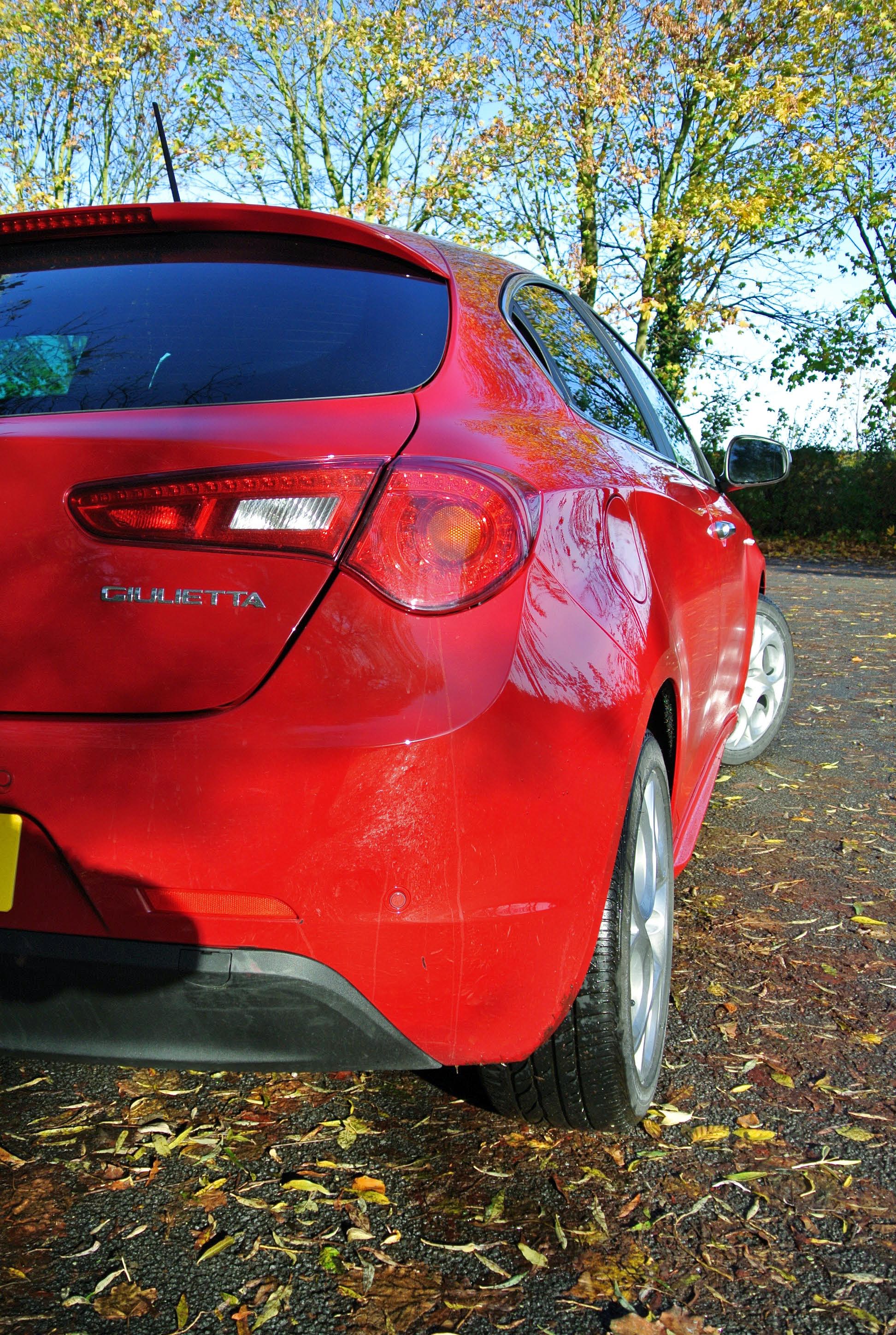 Although Italian cars still carry an unfortunate (and undeserved) tag of ‘unreliability’, the truth is that, apart from an instance a few years ago, testing a 156 V6 model, when the entire exhaust system fell off just after I had taken the delivery driver to the local station, I have never so much as experienced a misfire, let alone a bulb failure on any Fiat Group products. I have no reason whatsoever to believe that the Giulietta will provide less than glitch-free service to a potential owner. So confident is Alfa that it provides a three years, unlimited mileage warranty on all new models and, let’s face it, even Ford has a 20,000 annual limit.

Despite the car’s little foibles, many of which are related to me, not it, I truly wanted to love the Giulietta. However, I did not, which I believe is endemic to the brand at this time. There is nothing intrinsically ‘wrong’ with the car but, while laced with charismatic detailing, it does lack desirability. In many respects, it is too easy to be swayed by its colourful and historical badge but I want something else from Alfa Romeo. The problem is, I am not getting it and even equipping it with ‘DNA’ is playing a needless sop. It is proper DNA that Alfa needs and it must make it tangible across its model range, something that highlights its mechanically advanced past, in the process dispensing with the superficial ‘gloss’ of a history that might be no less than eminently forgettable. Alfa does not seem to know what it is, even though it could and should be a BMW rival and that is the saddest reason of all.