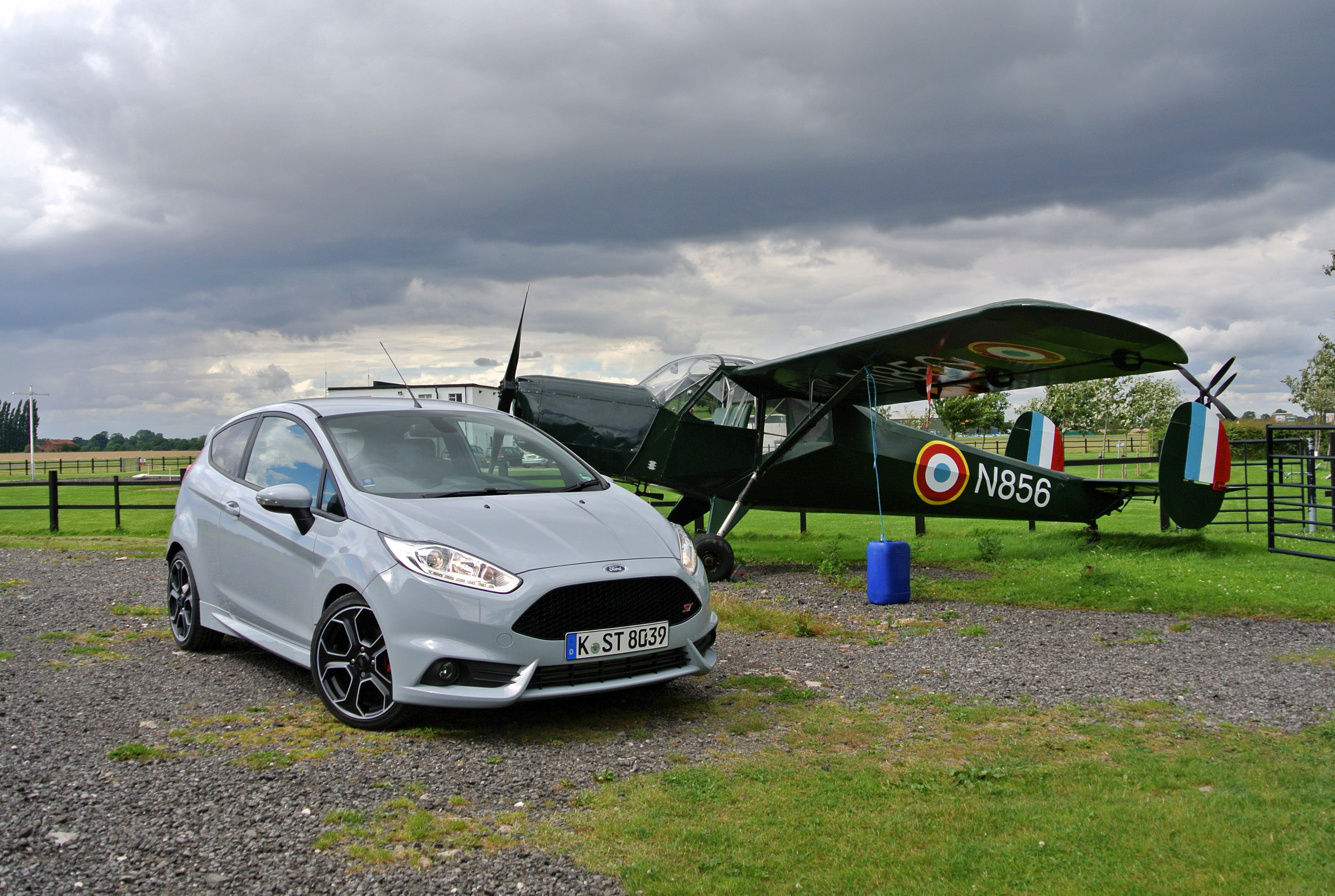 Famous for producing the most commercially alluring of sporty models, Ford is on a grey track with its much uprated Fiesta, which Iain Robertson believes to provide the ultimate fun, as long as you can afford it!

To be fair to Ford, it calls its Petrel Grey, Storm, with partial deference to the seabird. Ford’s sportiest numbers have been Racing Blue in hue since the final run of Escort RSs. Therefore, it comes as a surprise that the company has determined that the ever-so-tedious shade of grey, which may, or may not be one of the ‘Fifty Shades of’, should delineate its more outrageous offerings.

In my opinion, this choice of colour is indicative of the broader mental state of Ford Motor Company…a carmaker that was once so confident, perhaps even verging on arrogant, about its place in the world…which is now more subdued than ever. I would venture to suggest that this once proud and sometime British manufacturer is now so much under the cosh of both Cologne (where Ford of Europe’s HQ is planted) and Dearborn (in Michigan, USA, its world HQ), that it exists in a mildly dream-like state not dissimilar to a dotty maiden aunt!

On the other hand, perhaps Storm Grey is the ideal ‘unthink’ for a company that is encouraging its customers not to believe in anything that they have been told about motorcars. As it blends so effortlessly into a typical British sky, its very neutrality should ensure that all the bells of hell remain un-alerted, when Fiesta-man blasts past speed detecting devices in the hottest wee hatchback of a few. I would have loved to have said ‘of them all’, which a Ford of thirty years ago might have declared, but 200PS (197bhp) is only a sniff at the heels of several warmed-over class contenders.

For the second time in just four paragraphs, I am being fair to Ford by stating that the ST-200 is precisely that and not an RS, even though Ford has tinkered with the potential of an RS Fiesta, especially now that its RS Focus is armed with 4WD and a big-banger, 365bhp petrol motor. That ‘King o’ the Hill’ model, apart from being the car that I have described as the most-fun-a-chap-can-have-with-clothes-on, is now a country-mile removed from the conventions of hot-hatchery, which leaves a yawning chasm below its ST variant for a zesty Fiesta alternative.

While Ford remains unlikely to sanction an RS Fiesta, an ST must suffice. However, the ST-200 is actually a nad’s better than it ought to be. I cannot call myself a fan of the regular ST, which is around £3,500 less costly (in comparable ST-3 trim), develops a ‘mere’ 179bhp and provides a bone-shaking ride like The Grand National at Blackpool Pleasure Beach. Featuring a juicy overboost facility on its 1.6-litre turbocharged-petrol EcoBoost engine that hikes the potency momentarily to 213bhp, for overtakes and snappier exits from roundabouts, the ST-200 does its best to justify the price premium. 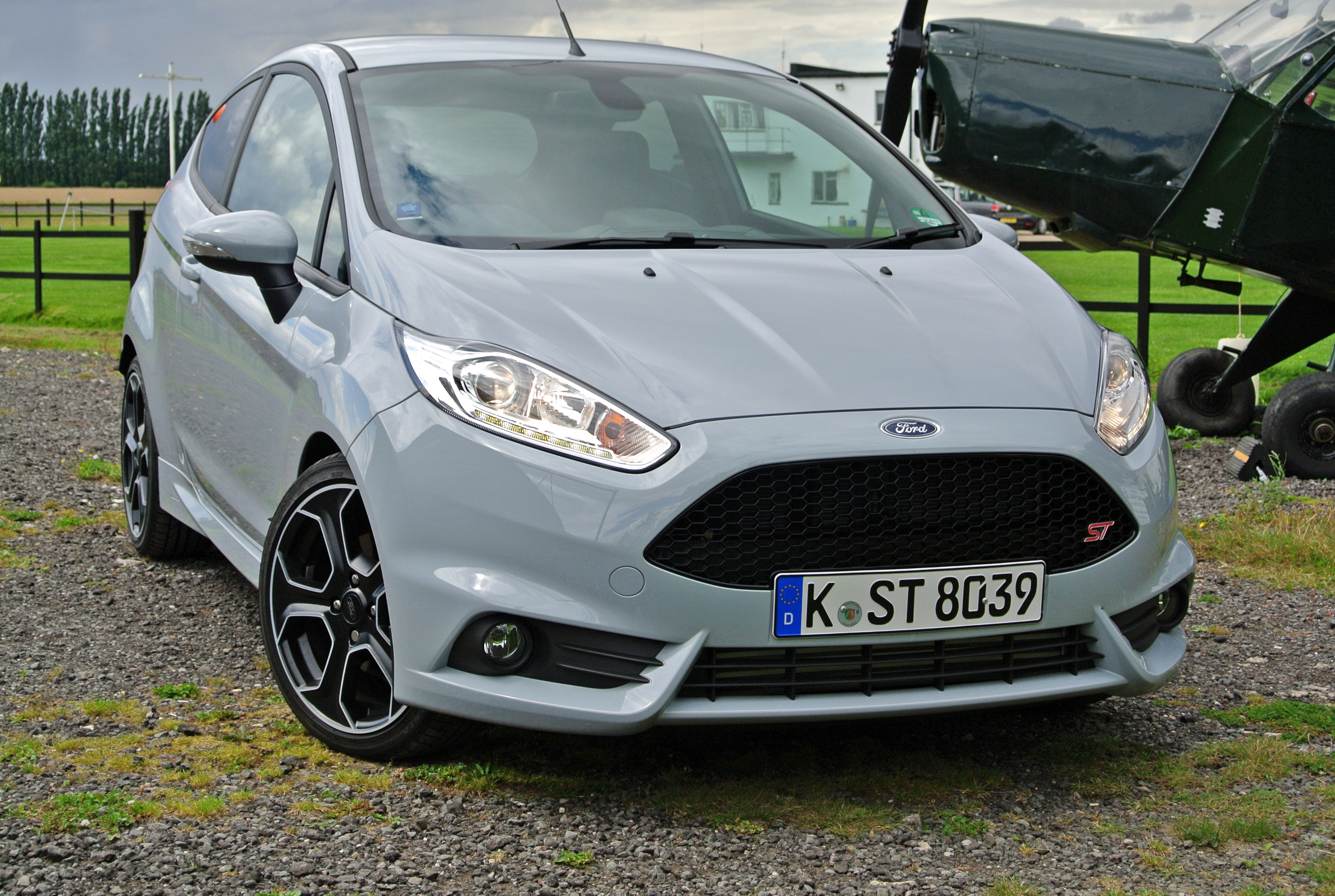 Chunky little thing that it is, the ST-200 tips the scales at 1,163kgs, which makes the larger and significantly roomier Suzuki Baleno a genuine lightweight at under 900kgs. Yet, there is enough punch to deliver a 0-60mph dash in about 6.4 seconds, before coursing on to a top whack of around 142mph, figures that are markedly better than for its ‘lite’ little brother. Sadly, it never feels like it is delivering quite what it purports to and it is only the directing of intake roar through the front bulkhead into the cabin (via a teensy pipe) that affords an impression of sporty ingenuity, as long as you can tolerate the perpetual ‘whooshing’ and turbo whistling.

Ford promises an Official Combined fuel return of 46.3mpg, which you can dismiss immediately, as the innate boy-racer in most red-blooded types punting this Fiesta for the first time will want to eke out that 20 seconds worth of overboost in third and fourth gears (the equivalent of 236lbs ft of torque) and a more normal average of 34.5mpg will result. As the car’s exhaust emits a not-so-readily-forgiven 140g/km of CO2, you can expect to pay £130 annually for VED.

Mated to a six-speed manual gearbox that features a lower final drive ratio, which does create better acceleration times, I found that the gears were perfectly spaced to take the maximum advantage and the shift quality was as good as in any hot hatch of the modern era. Yet, as highlighted earlier, the regular ST, which remains on-sale by the way, does suffer from the darty, edgy handling envelope so beloved by backward baseball cap-wearers. It is not my style, because I am no longer in my teens. Thankfully, the ST-200 feels altogether more grown-up. 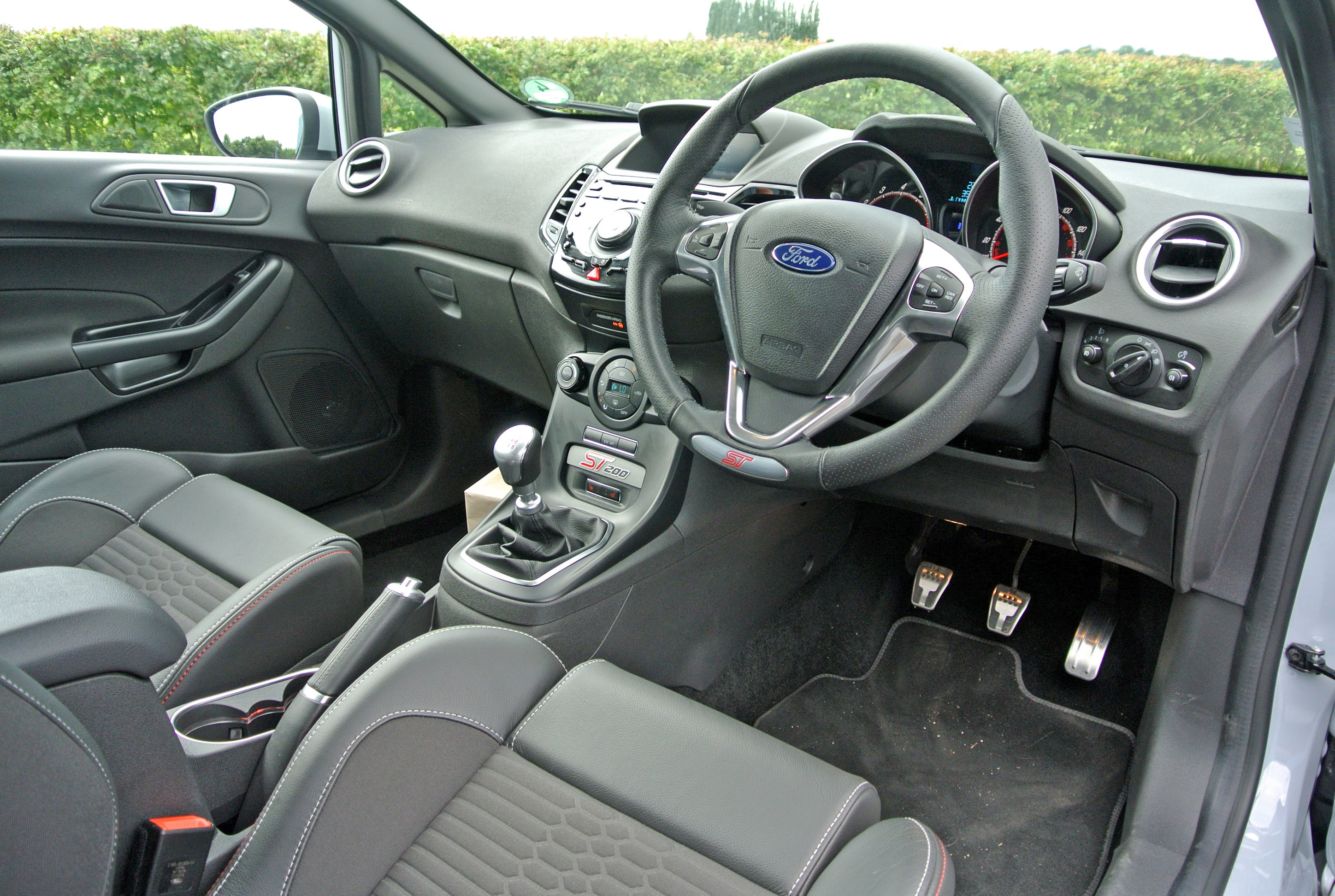 Quite what Ford has effected with the ST-200’s underpinnings can be summed up in a thicker front anti-roll bar and spring and damper rates that have been softened…a lot. As a result, the first-class steering responses, for which the Fiesta has been long renowned, are allowed to work more fluently, because the driver is not being flung around the cabin like a rag doll. There is visible body roll but only severe provocation will lift an inside rear wheel on tight bends. Grip levels are more Superglue than Continental Sport Contact. ST-200’s saving grace lies in body control that is on a different and much better level than the normal ST Fiesta, some of which will lie in the use of 17-inch, rather than larger diameter alloy wheels. If only Ford would transfer those settings to the less powerful model, it would have a junior hot-hatch that would tip its rivals into the weeds. Wake up from your slumbers, Ford!

A pair of Recaro seats grace the front of the cabin, leaving not much space behind for more than a couple of limbless relatives. Large and accommodating, they could do with an extra inch of so on height (downwards) adjustment, for the taller gent, although their rearward range is more than adequate for most six-footers. The well bolstered seats perform a sterling task of hip-hugging the driver (and front passenger) on press-on regardless cross-country forays. 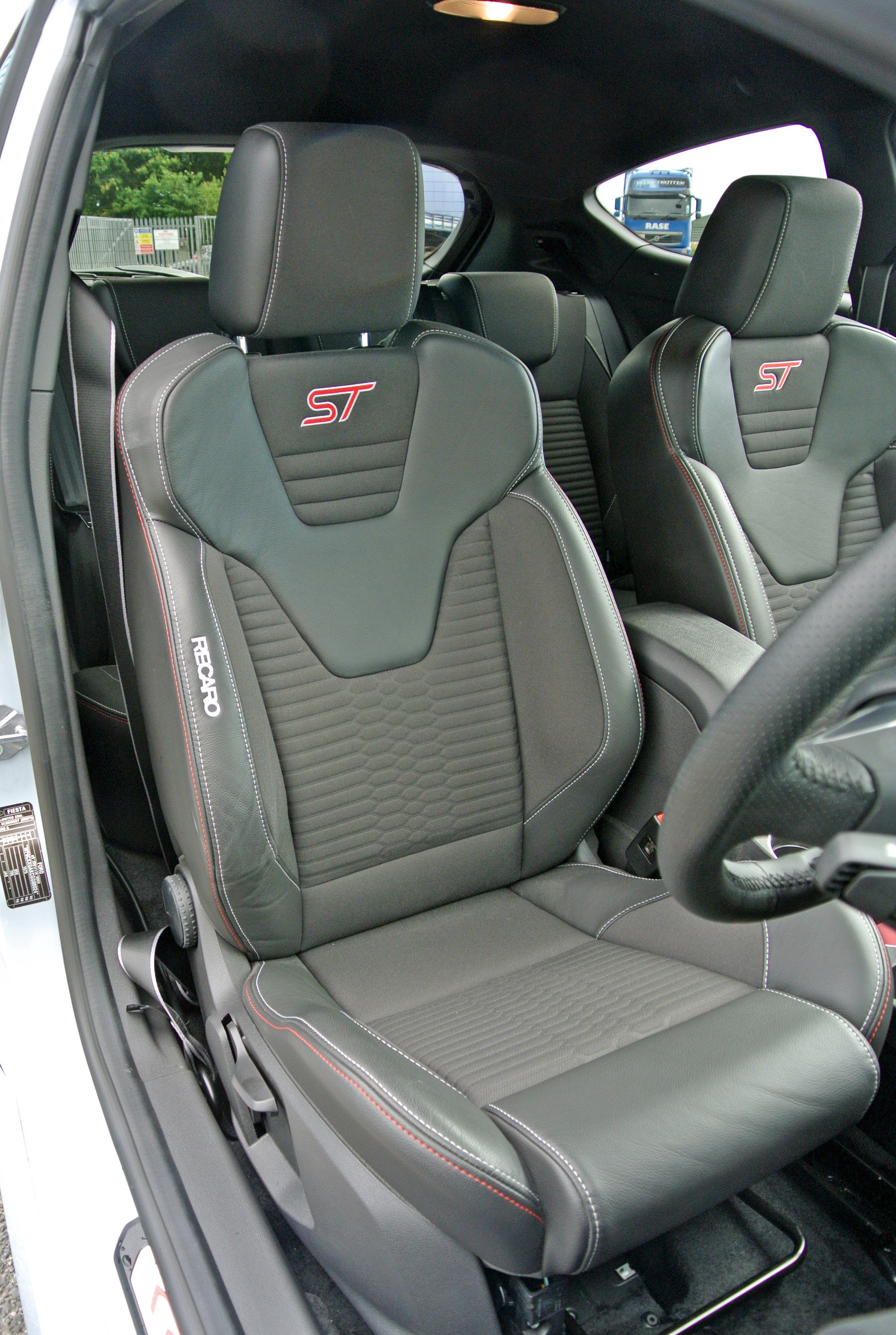 Be aware that Ford calls this model a ‘special’, with around 400 examples set to grace our roads, most of which will be acquired by the ardent and fanatical Ford RS Owners’ Club members. They love this ‘special’ type of con-trick. However, fast-falling residual values will put paid to any company car interest, even though corporate funding is the only classification that can afford it, especially when you appreciate that the ST-200 is a final calling card for this model of Fiesta. It is an old trick. Create a run-out version that is buoyed by heaps of equipment and a sky-high price tag, when there is a new version not so far around the corner. Oh darn! I have just given away the secret.

For a driver of my dimensions, the cabin is very cramped, which means that my ultimate driving pleasure is damped somewhat. It is a situation not helped by the fussy and over-complex Sony sound system, with its plethora of tiny buttons and a twist, dip, nudge and turn main controller that works unlike any other head-unit. The small screen above it is a squint-worthy method of ‘sat-navving’, or info-generating, or rearward-viewing, and is simply inadequate. 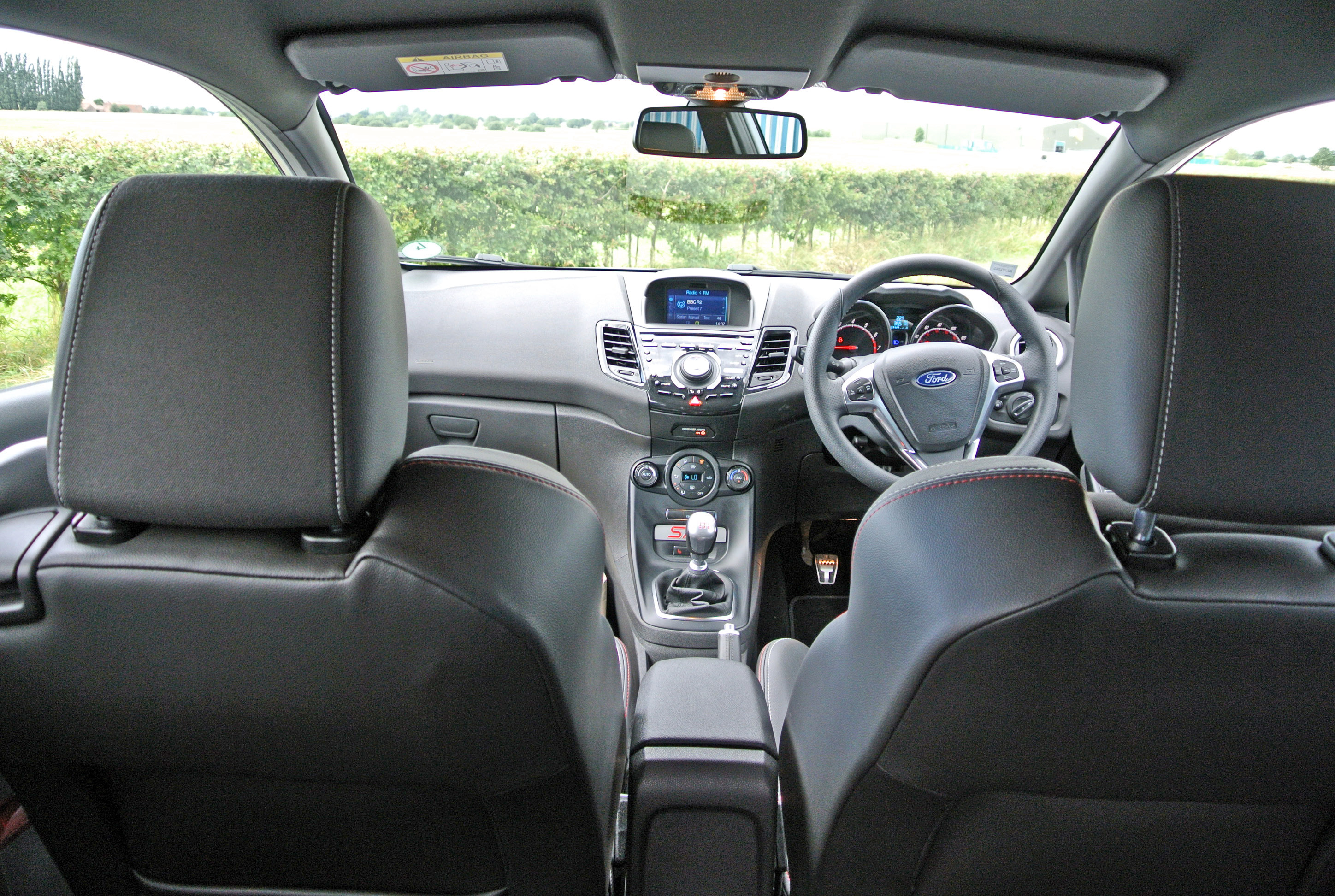 Fortunately, the front seats are heated, although the windscreen has those annoying heater wire striations running down it. The power-fold door mirrors have puddle-lamps, the door sill plates are red illuminated. Both headlamps and wipers feature ’auto-on’ capabilities. ST badges emphasise the model’s point everywhere you look and there is both key-free access and a pushbutton engine start (and stop). It is the most effective manner for Ford to empty its parts bins, before the entirely new Fiesta model is launched.

Yet, not concentrating on a one-time Ford tenet of offering genuine value-for-money, its fun side is excellent. The grey paint, which does tend to look like primer that’s been polished, is actually not as depressing as it could be. However, the ST-200’s handling and driver-satisfying responses are a sheer joy. It might not be an RS but it gives a convincing performance that is readily appreciated and makes you want to drive the car and the more challenging the road, the better. 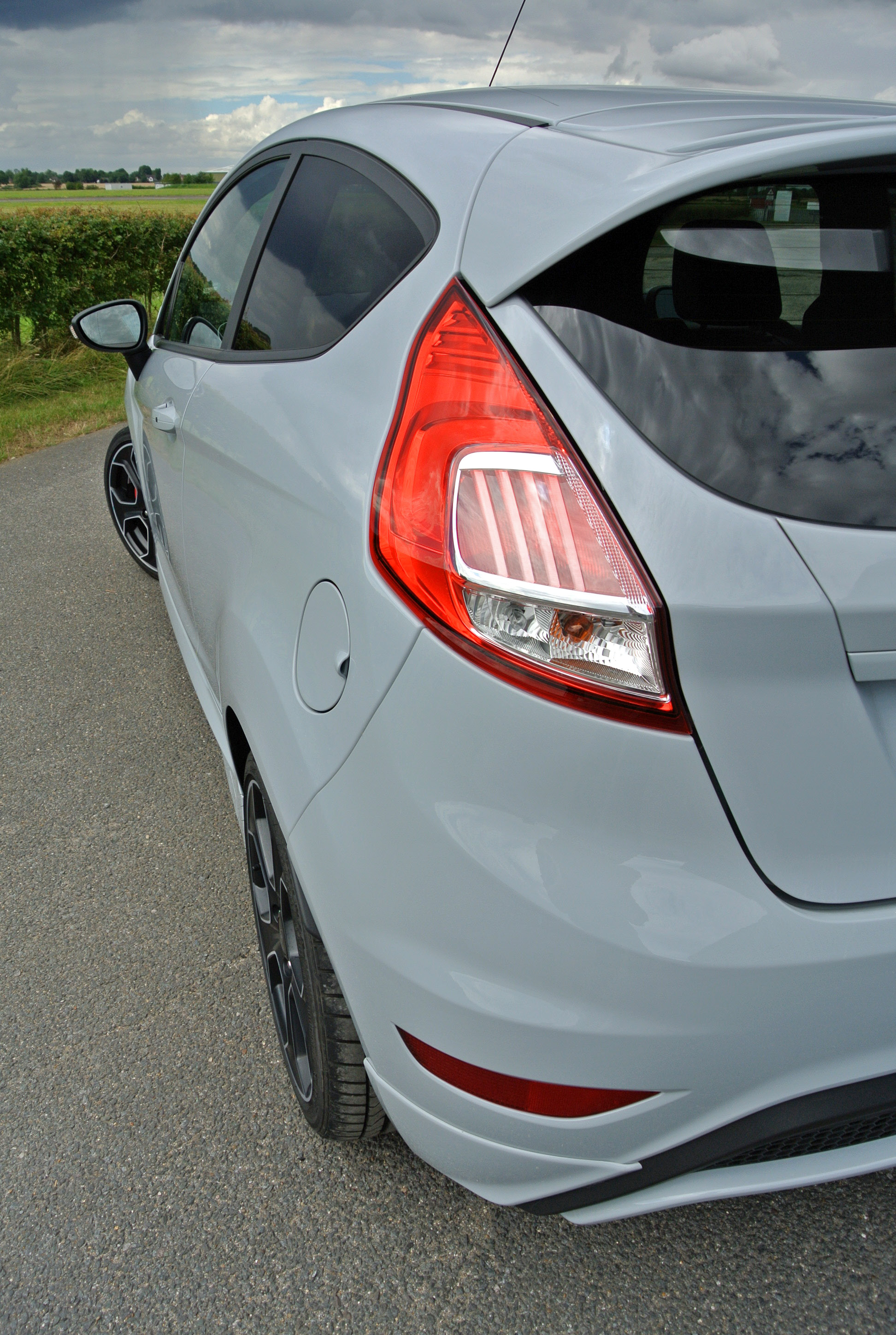 Once you get over the shock of paying £23,120 for a lukewarm Fiesta, which includes £75 for an adjustable boot floor, £50 for a central rear headrest and £250 for the rearview camera, a Storm Grey ST-200 still looks like conspicuously poor value. Of course, this is a pity, because, in fun terms, this Fiesta has it cracked. It could be a portent of a future, more refined model but, if you really must have a sporty Fiesta now, then I would opt for the lesser ST and invest in its handling.

←
→
Learn from our office rental mistakes December 8, 2015
Why female engineering students leave the field October 26, 2016
The drugs cheat we CAN forgive September 10, 2015
‘Designing out’ cyber threats to businesses and personal data January 30, 2019
‘Smart homes’ to help older and disabled people get digital skills and tackle loneliness in rural areas January 8, 2019
Artificial Intelligence to help save lives at five new technology centres November 7, 2018
Why subscription business models nearly always fail
Hi Vijay. You raise an excellent point - thank you.…
Why subscription business models nearly always fail
Why you not talking about Netflix,Salesforce,MailChimp and other successful subscription…
Bridgestone's new Turanza T005 has a gripping tale to tell
Can these tires be used in light snow on an…