You don’t have to be pious to drive a Prius

While the concept of eco-friendly transport has many potential pathways to travel, Iain Robertson suggests that you might be as well to stick to the well-trodden hybrid route, which possesses a positive sense of realism to it.

Whomsoever coined the expression ‘You can lead a horse to water but you cannot make it drink’ has the undoubted quality of being the originator of the oldest English proverb. It was recorded (in a book of homilies) as early as 1175AD. Yet, as a truism, it continues to apply today and will do so far into the future.

Its relevance is never clearer than when envisaging the entire hybrid car concept and what it ought to mean to the consumer, although it is a production reality, with an increasing number of manufacturers following Toyota and investing in the technology. The vast majority of them still regard it as a frippery, the perfect automotive expression for the chap wearing a slightly stilted ecological halo, while also declaring, with as much blatant obviousness as possible, that he is ‘saving the planet’ and, this, after 15 years of market-building.

The natural response is going to be cynical, sadly and invariably. 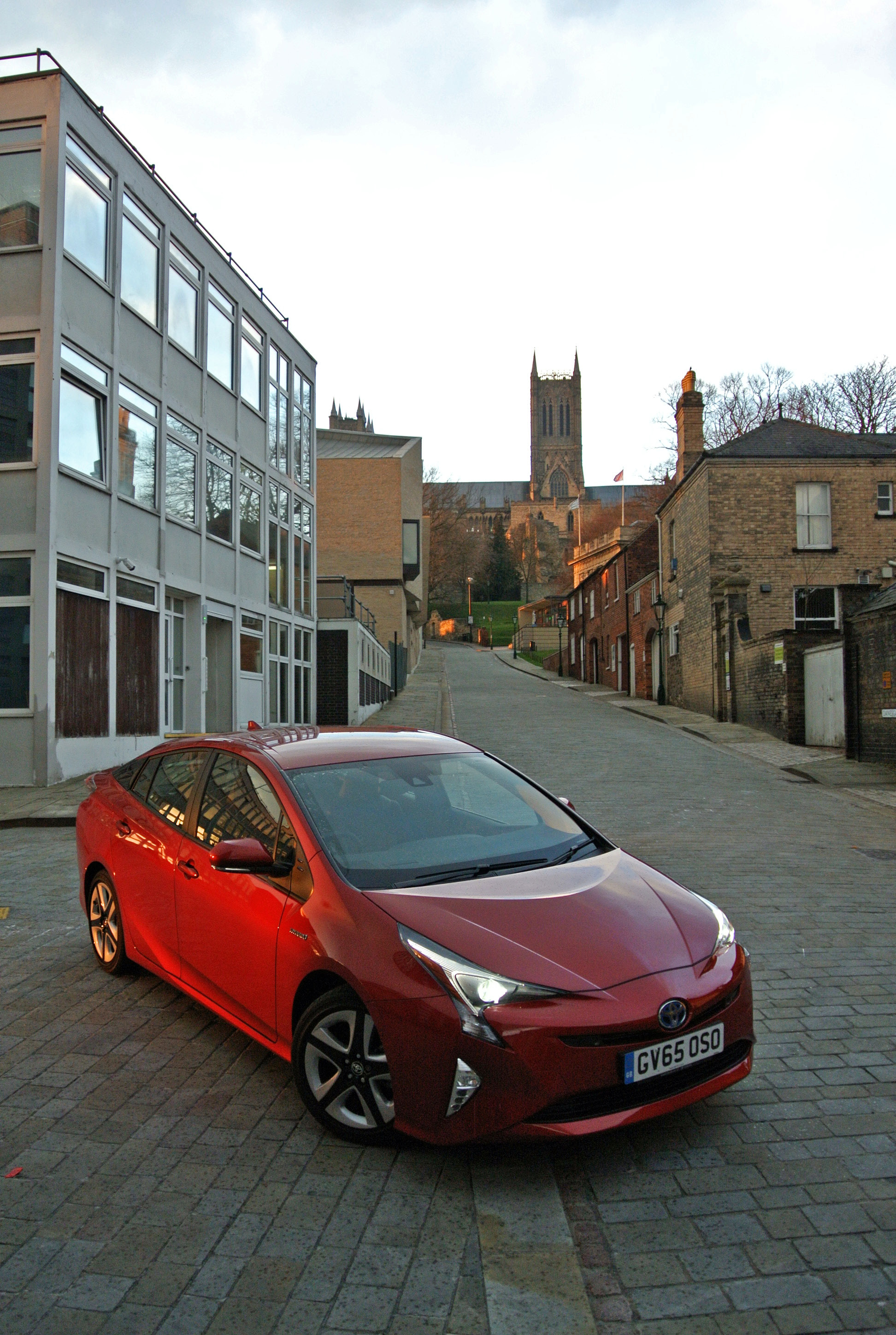 However, I have been fascinated by hybrids ever since the first one, a Honda Insight, hit our roads early in the turn of the Millennium…any sooner would have missed the ‘Dan Dare’ appeal, despite its production readiness in the previous decade. There has always been a slight kerfuffle over whether it was Honda, or Toyota, that first developed the concept. Regardless, both manufacturers took different directions to arrive at a similar conclusion, although Honda did sell the Insight first in the UK, while Toyota followed soon afterwards with Prius, even though it was the leader in its domestic market.

While choosing the name Prius is said to lie in Toyota’s decision to introduce the model before ‘environmental awareness’ became a mainstream social issue, its roots are Latin and it translates as ‘before’. Inevitably, the average Prius owner has become familiar with the personal descript, ‘pious’, although, once over the ‘shock’ of the list price (£27,945, as tested), ‘parsimonious’ might be more appropriate.

The working of an optimised, high-compression, four-stroke petrol engine alongside an electric motor is the crux of today’s hybrids. While the electric motor itself will not propel the 1.4-tonne five-door, a Nickel Metal-Hydride, 28-modules, battery pack, developing the equivalent of 71bhp, sits beneath the car and, acting as a power source, it works either alone, to provide a limited (around 1.5-miles max. range) Electric Vehicle mode, or to provide a more normal and on-going power boost to the 97bhp, 1.8-litre petrol engine. Together, even though simple mathematics does not suggest it, they have a combined power output of 119bhp. 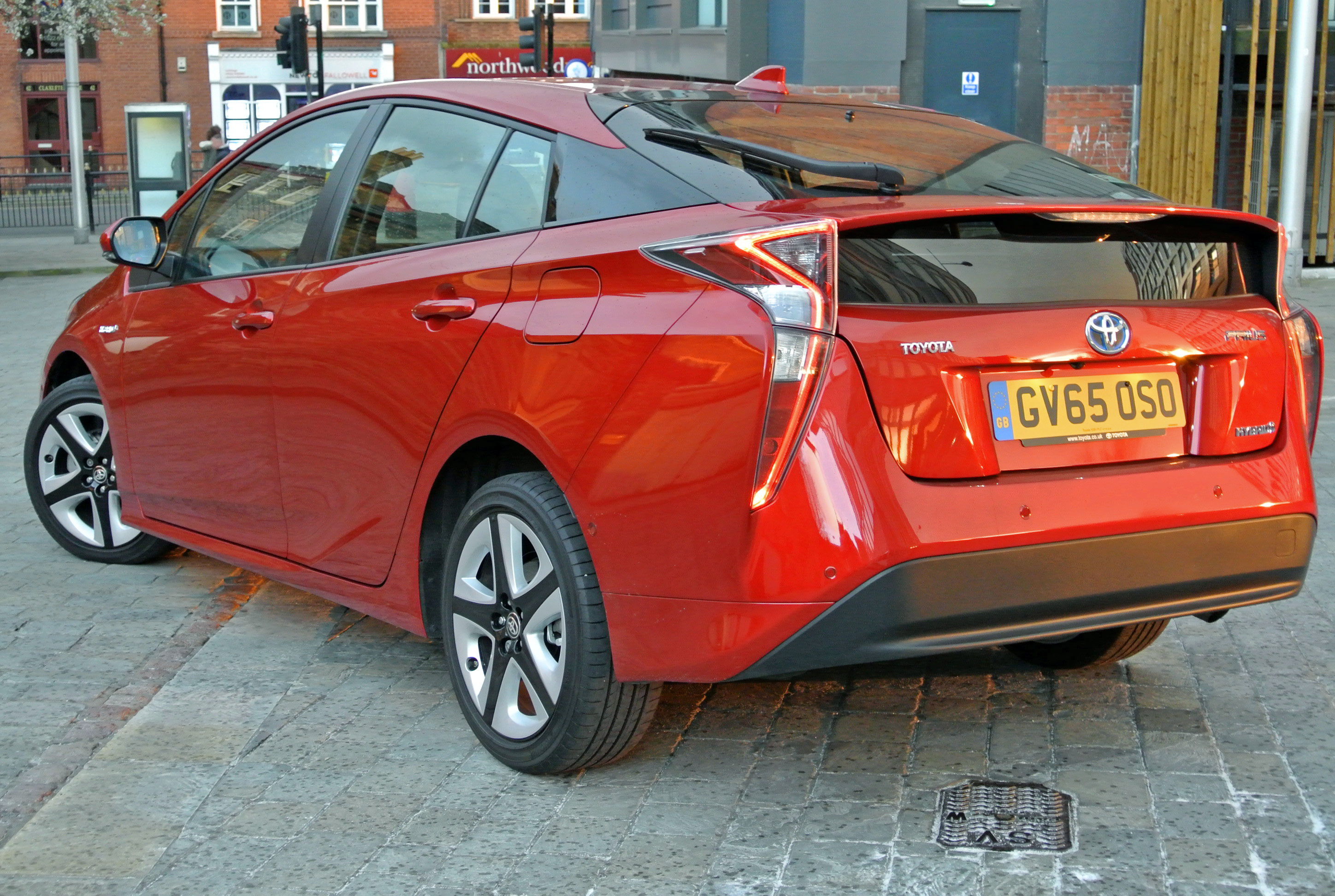 The optimisation process affects the Prius in several ways: by means of reducing frictional losses in the semi-conventional engine, enhancing the overall aerodynamics (which goes some way towards explaining the slightly wacky shape) and by reducing the rolling resistance and the unsprung weight of the car. To be fair, it is a tad more complex than that but, keeping it elementary helps to comprehend a most involved manufacturing process, which does go someway towards explaining the invoice cost of the car.

It is a great pity, therefore, that neither the motor trade (although values have hardened slightly), nor the majority of consumers, have taken on-board the low fuel consumption, the low eco-impact, or the first-class practicality of Prius. Trade-in valuations are disrespectfully low, while onlookers (to be fair, with familiarity, far fewer of them) think that the Prius driver is a plonker. They all need to reconsider, as the Prius is very much a car of the moment.

My logic for this conclusion resides in the fact that hydrogen fuel-cell cars, while in the ‘offing’, will remain rarities for a few years to come (no refuelling infrastructure and even more fears about using hydrogen as a fuel), and EVs (Electric Vehicles), while growing very slowly in uptake rate suffer from questionable mileage ranges, poor numbers of public charging points and the immense costs involved. Yet, hybrid is here and now.

A cursory glance around the latest, fourth generation version of the Prius reveals an even swoopier body than before, helped mainly by the use of an all-new ‘chassis‘ architecture, which will be used by forthcoming Toyota models. Its head and tail-lamps are notable for their overt styles. See one of these coming, or if you happen to be behind one, and you will not forget it in a hurry. However, the interior, while markedly better finished than before, stretches credibility a touch, with its use of shiny white plastic for the centre console and the spokes of the steering wheel. To be fair, it is of good quality. 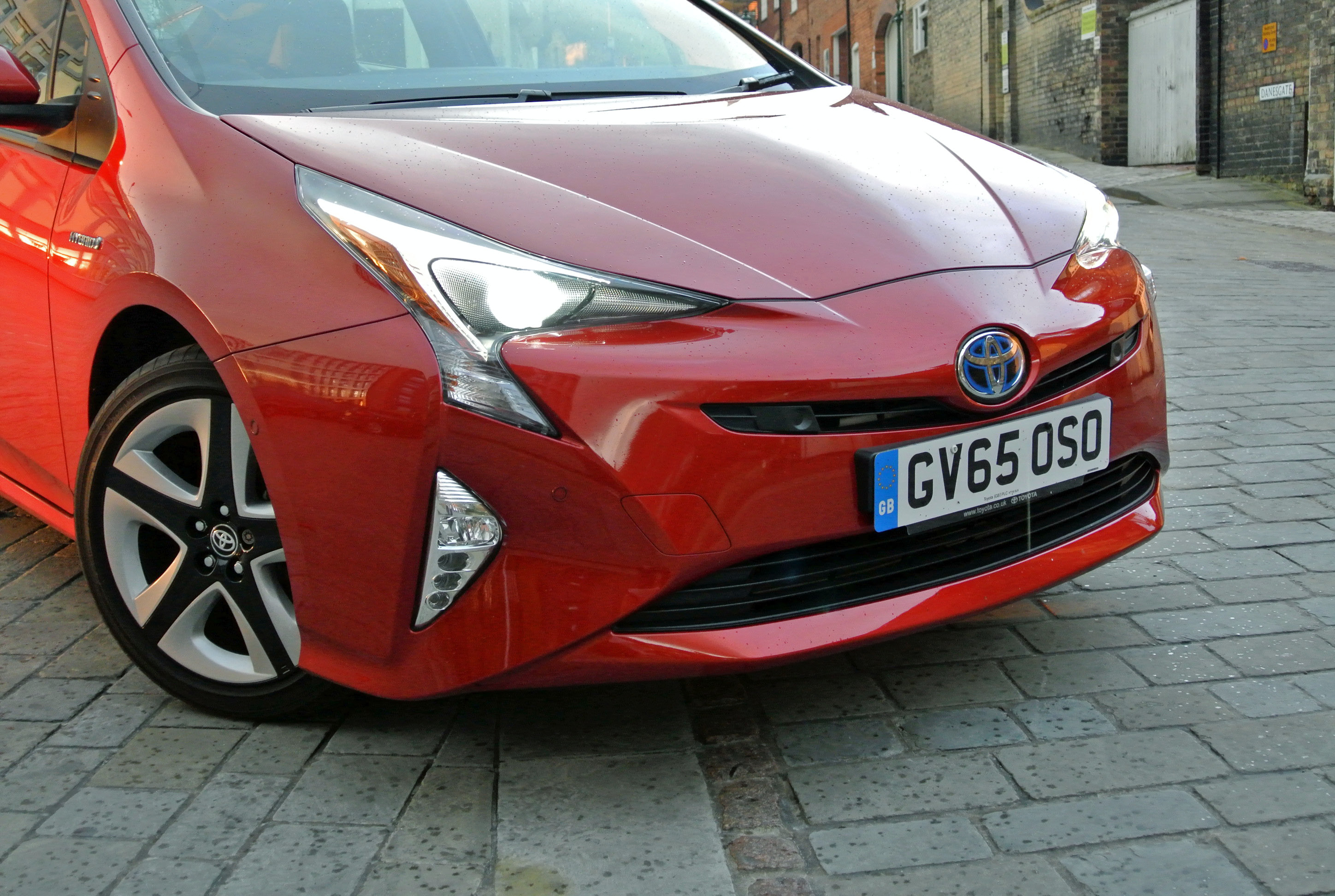 Yet, it is the ‘induction charger’ device built into the base of the console tray that is innovative…just not if you own an iPhone, for which you will require an optional-cost converter. Depress its power-on switch and your smart-phone can be recharged, without a need to find cables and a spare USB slot. It is clever stuff on a car of this class.

The hide-covered seats are very comfortable indeed, being well-matched to the excellent suspension. There is plenty of space up front, although taller drivers might appreciate an extra inch of rearward seat movement. As there is a more than adequate amount of space in the rear for three adults, they would not miss the extra needed for such a driver. Cabin storage space is adequate, while the boot is roomy, if a bit shallow. The wide opening makes loading bulkier items very easy. It can be augmented by flipping forwards the two-thirds/one-third seat backs. Obtaining a safe view from the driver’s seat is very simple, as the steep angle of the rear of the roof line is not as restrictive as it appears from outside the car. 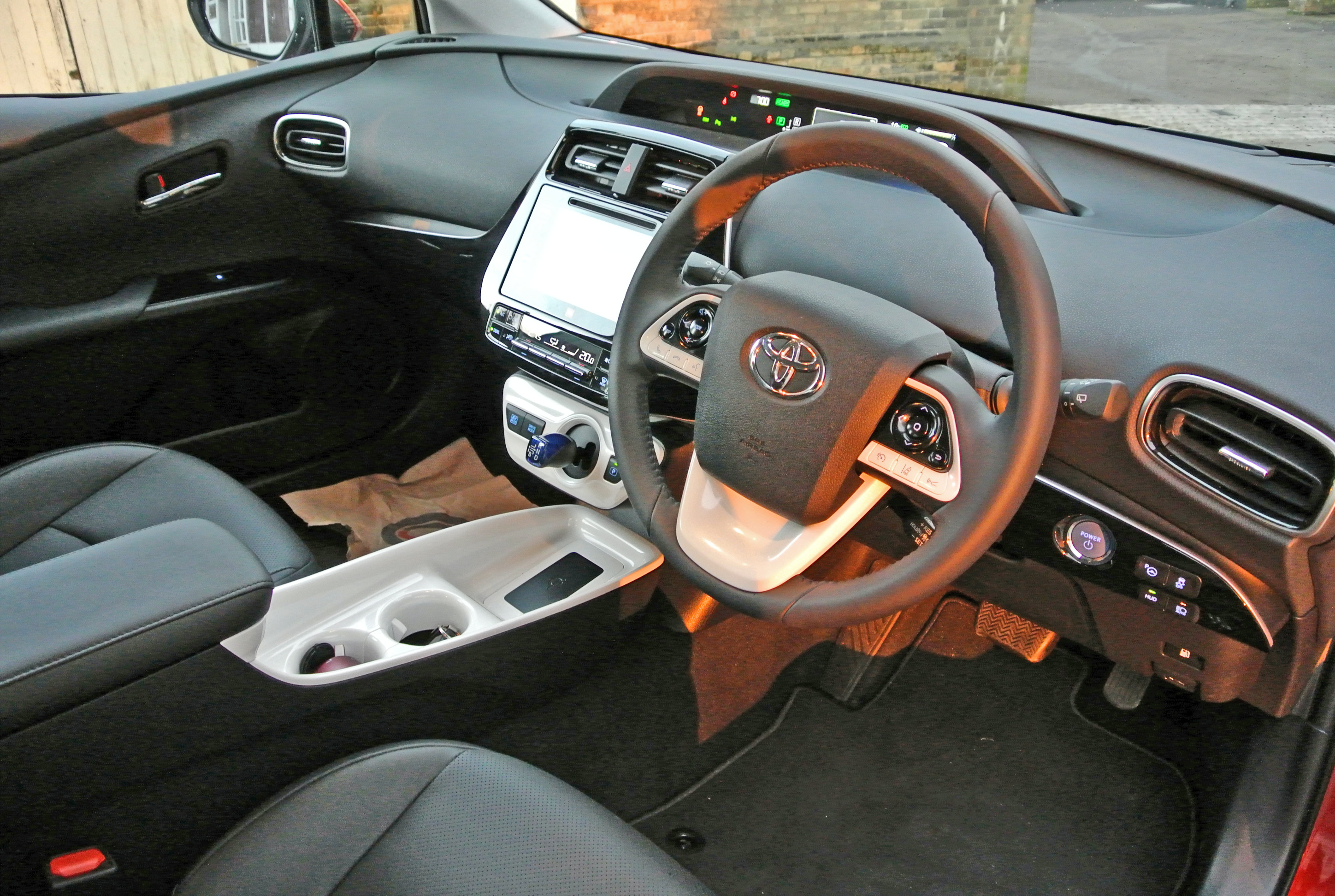 The parking brake is activated by an illuminated left-foot pedal, which you depress to act on the rear brakes and to release. Otherwise, the car can be parked just as you might an automatic, by depressing the ‘P’ button adjacent to the stubby transmission selector. The lever is much as before, with Bottom gear spring-biased to the left and Reverse and Drive opposite each other, with Neutral in the centre of the gate. It controls an electronic constantly variable transmission, i.e. no gears, just metal belts driving the rear wheels between a pair of bellows. As a result, full-throttle is accompanied by a rise in engine revs, in typical CVT manner, until the car catches up to the desired speed. There are separate switches for ‘EV’ and ‘Driving Modes’. Incidentally, the push-button starter and keyless entry are part of the convenience package, while the instrument panel is entirely digital for both speedometer and other driving information.

The Prius is best left in Drive, selecting ECO mode to achieve the best fuel returns, which is surely the object of acquiring this model in the first place. It is worth noting that the test car is not the Plug-In version, which has just been unveiled at the New York Motor Show, along with a promise of a 200-miles range but no promise of when it will go on sale in the UK. My advice would be not to use the ‘EV’ button, as you might be disappointed with its strictly limited range. However, as the Prius uses parallel-hybrid technology, both electric and petrol engines work in unison continually.

Of course, this leads me on neatly to the achieved fuel consumption on my customary 50-miles route. The best I attained was 87.4mpg, which compares most favourably with the 85.6mpg Official Combined figure. The worst figure was a still respectable 54.3mpg, thrashing nine bells of hell out of the car. Its CO2 emissions are pegged at a mere 76g/km. Unlike its forebear, the chassis dynamics of the Prius Mark 4 are significantly better and it rides smoothly, yet will corner with both agility and neutral stability, while, despite the eco-tyres, it grips strongly. The steering responses are less remote than before and the wheel cross-spokes carry several functions on them. The car’s top speed is given as a limited 112mph but it can despatch the 0-60mph sprint in a zesty 10.1 seconds. Keeping up with the rest of the traffic is a doddle. 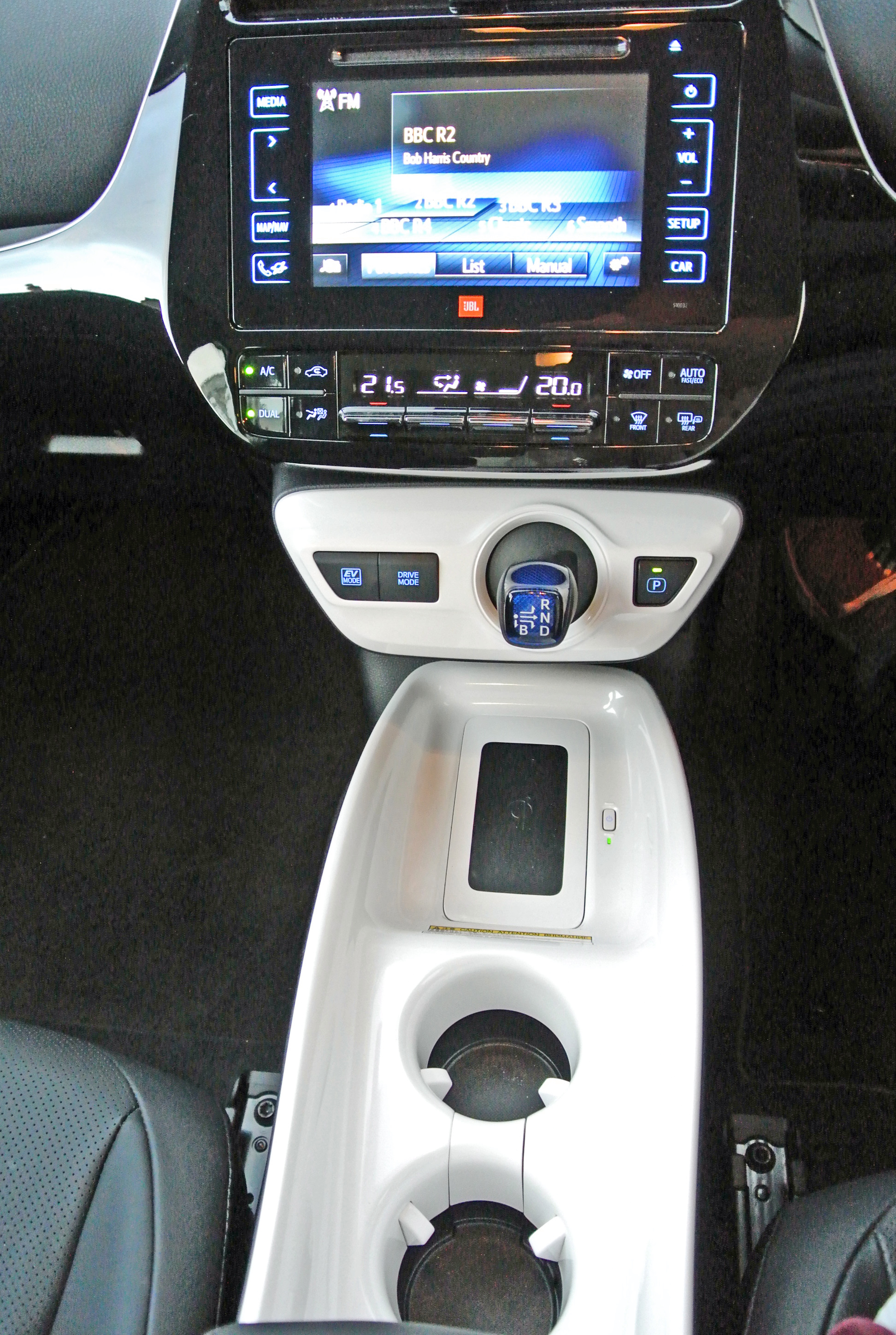 The balance of the controls consists of typical Toyota mainstream items, which means a pair of stalks on the left of the column, for lights and indicators, with the lower one for the cruise control, and one on the right for the wipers. Both lamps and wipers feature an ‘auto’ setting.

Overall, Toyota has good reason to feel ‘bullish’ about its newcomer. Driving it feels altogether more ‘normal’ and very enjoyable, not least because the Prius is very refined, especially so in town. Yet, it provides more than enough get-up-and-go for engaging cross-country drives too. It is fairly expensive but, as explained earlier, there is a good reason for it and it lies in its technology-laden specification. The new Prius would make an excellent business vehicle, while retaining strong interest for the rest of the family, or friends, at weekends.

Quote: i.e. no gears, just metal belts driving the rear wheels between a pair of bellows

Just to point out that the Prius does not have, nor ever did have metal belts driving the transmission, your confusing it with the Auris. The Prius uses a different sytem altogether which involves no belts of any kind, it’s called a Sun & Planets sytem

Hello Vic.
You are absolutely correct!
However, in mitigation, although I knew about the epicyclic transmission (sun and planets system of which you mention) fitted to early Prius models and I am very aware of the CVT (belt and bellows) type fitted to the Auris model, I had been mis-informed, at the media launch of the Mark 3 Prius, that the transmission, now known as e-CVT, was in fact just like all other CVT type transmissions. That person was incorrect. However, as I seldom drop below a car to admire its underpinnings and I was taking that company informant on his word, every Prius since that I have tested has been referred to in the manner above. I now modify all of my comments, in line with those you highlight. Thank you.
Iain R.