Confronted by model choices that can be confusing at the best of times, Iain Robertson has gone to extremes with his back-to-back sampling and comparison of the Seat Leon in both lower and upper guises.

Naturally, although the visual similarities of the admittedly most attractive Leon five-door family hatchback are all but identical, with wheels, minor trim detailing and badges acting as model designations, despite engines that are one litre cubic capacity adrift, how far apart are they really? Well, to begin with, it is worth looking at the delivery of each model and I do not mean the transportation  to and from the dealership. 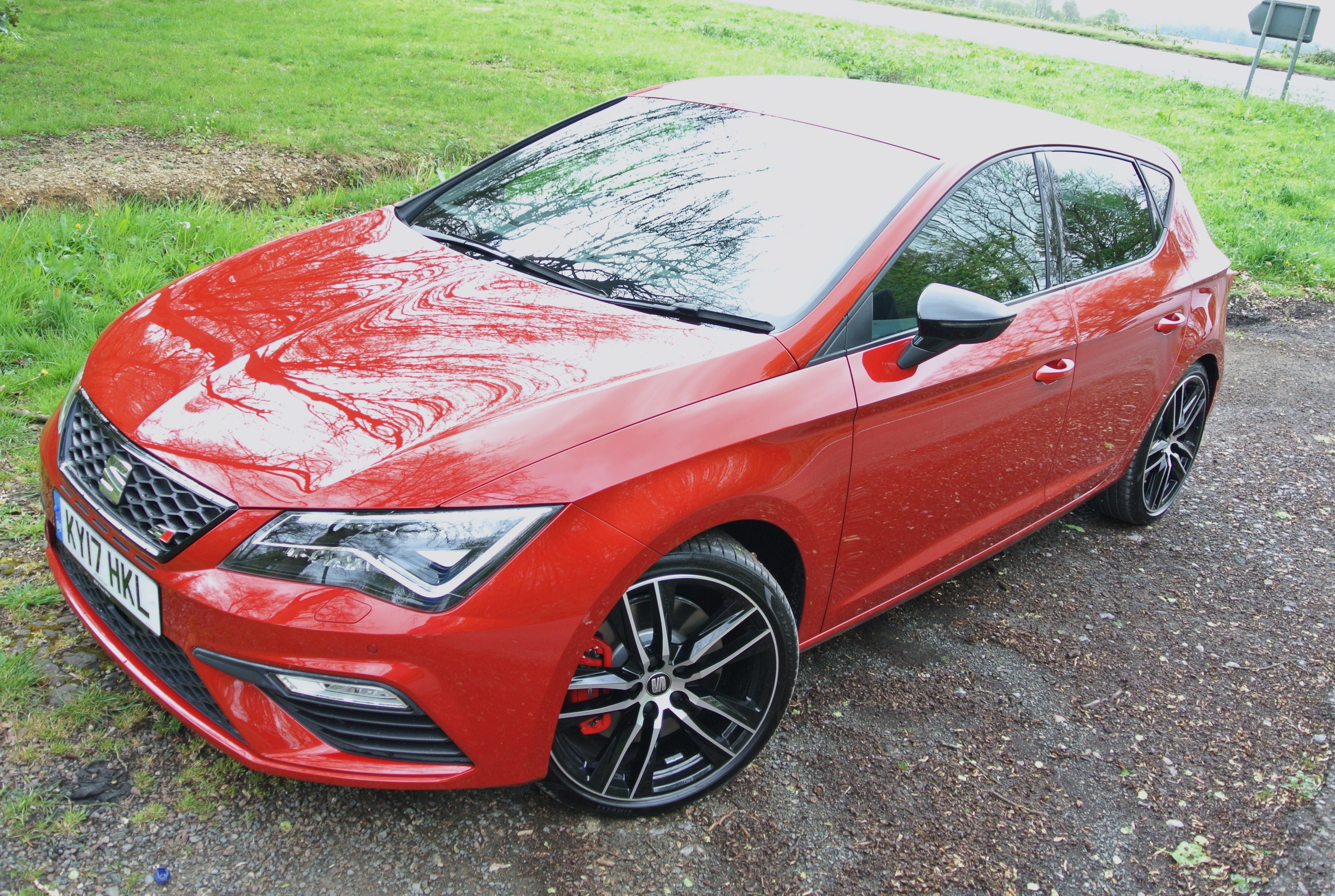 For a start, there is the price tag. The highly specified Cupra 300 weighs into the red corner at £34,070 (as pictured), while the blue corner is occupied by the SE Technology model tagged at £22,645. We all recognise that VW Group prices have crept up inexorably since the company’s need arose to fund its ‘dieselgate’ expenditure and neither model can be described as providing genuine value-for-money, as the Seat brand once used to, in the days when it was regarded as ‘budget’. However, the forces of ‘market pricing’ will make either car appear overpriced, or, dependent on the monthly PCP/lease rates, competitively affordable. It is a choice that ‘buyers’ will need to consider carefully. 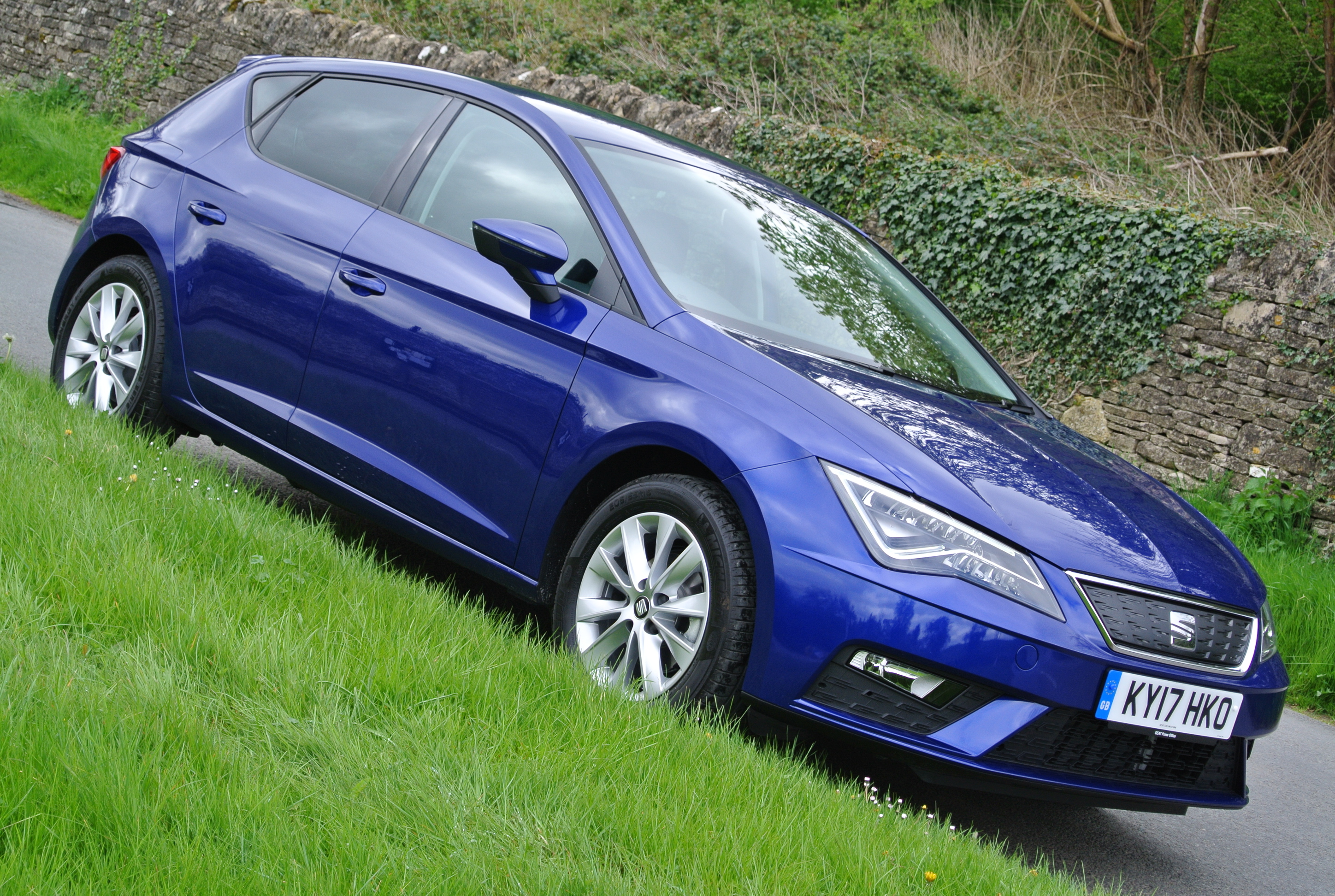 Performance is an inevitable attraction and the differences are stark. The red Cupra has one more piston in its engine block and two extra pistons on its front brake callipers than the blue alternative but both engines are stunning examples of pinnacle engineering achievements. To extract not far off 300 horses from a 2.0-litre engine is outstanding and, a few years ago, it would not be a car that you might entrust to your favourite maiden aunt for a brief shopping trip. For a start, she would have been intimidated by heavy controls and a nervous power delivery.

There is none of those shenanigans evident in the Cupra and, by heavens, it is blisteringly quick, capable of despatching the 0-60mph benchmark in a supercar-baiting 5.6 seconds, prior to running out of urge at 158mph, figures that are verging on lunacy for any family hatchback, let alone one that is almost as benign as this Cupra can be. Equipped with a 6-speed manual gearbox, it delivers an enormous range of driving talent, from around-town footling, to open-road blasting, all without so much as a teensy glitch.

Of course, the 1.0-litre ‘triple’ in the SE version is also something of a storm trooper, even when connected to a 7-speed, twin-clutch, automated (DSG) gearbox. Just as I believe that the manual transmission suits the character of the Cupra to perfection, the multi-cogged semi-auto unit is an ideal match to the punchy little 1.0-litre engine. It may only develop a paltry 112bhp but it is among the more potent of tiddlers and is capable of reeling off a top speed in the order of 126mph (only 32mph shy of the Cupra), logging a 0-60mph sprint in a still decent 9.3 seconds (a mere 3.7s adrift). However, here is the reality check: while you can chance it, reaching the top speeds of either Seat on UK roads is improbable, let alone illegal. In addition, the frisson attached to a fast-blast of acceleration, while mildly intoxicating, can soon become boring, if all you are doing is flat-blatting 0-70mph all of the time. Thus, Mini-Me is by far the better option.

Running costs can insert a spanner more quickly into the works than your mother-in-law might in a family argument. Boasting 64.2mpg (102g/km CO2, VED Band F), the 1.0-litre car is by far the more cost-effective. The gearing is also leggy enough to ensure that drivers can make the most of its frugality. While the Cupra states a 40.9mpg fuel return (158g/km CO2, VED Band I), once you have stabbed the throttle a few times for the aforementioned frisson, you can be guaranteed that its consumption will settle around the 34mpg area, just over half that of the 1.0-litre and it is far harder to sustain fuel-sipping in a racier model by inference of its potential. Users will also discover that the service bills are higher for the Cupra than the SE. If you can live with the on-costs, the choice is abundantly clear. 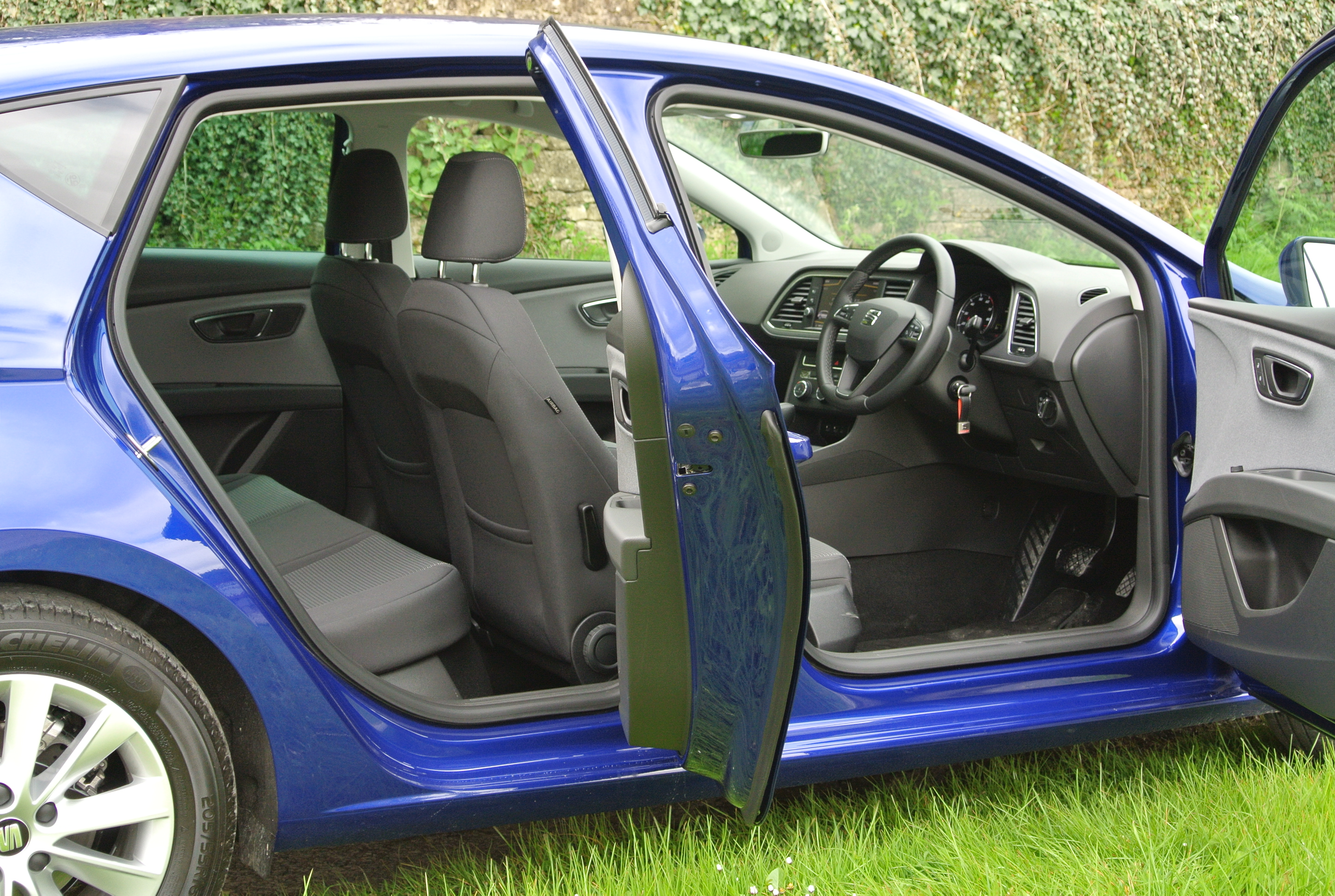 Comfort levels are broadly similar for this pair. Okay. The Cupra gains from supportively bolstered leather and Alcantara upholstered seats, because you would not expect anything less in an overtly sporting hatchback, and they are comfortable, be under no contrary illusion. However, the somewhat flatter and less shapely grey fabric alternatives in the SE, while allowing the body ensconced to roll a little more and be less hemmed in, are also very comfortable, as they should be from a division of a company that uses the same high-grade seating across many hundreds of models.

Comfort is also reflected in the wheel and tyre combinations. A popular recurring theme is that big wheels and ultra-low profile tyres can soon destroy any rolling comfort aspects. Fortunately, the fluent smoothness of the SE’s ride allows even a press-on driver to experience high levels of mechanical grip, even though there is insufficient power to make any further impression. The Cupra is surprisingly resilient by comparison, despite the rubber-band tyres. It is clear that Seat’s suspension engineers sought to achieve a sensible ride and handling compromise, because, despite a firmer damper response, the ride quality is actually among the best of the hot hatch scene. It is still firm but never harsh. 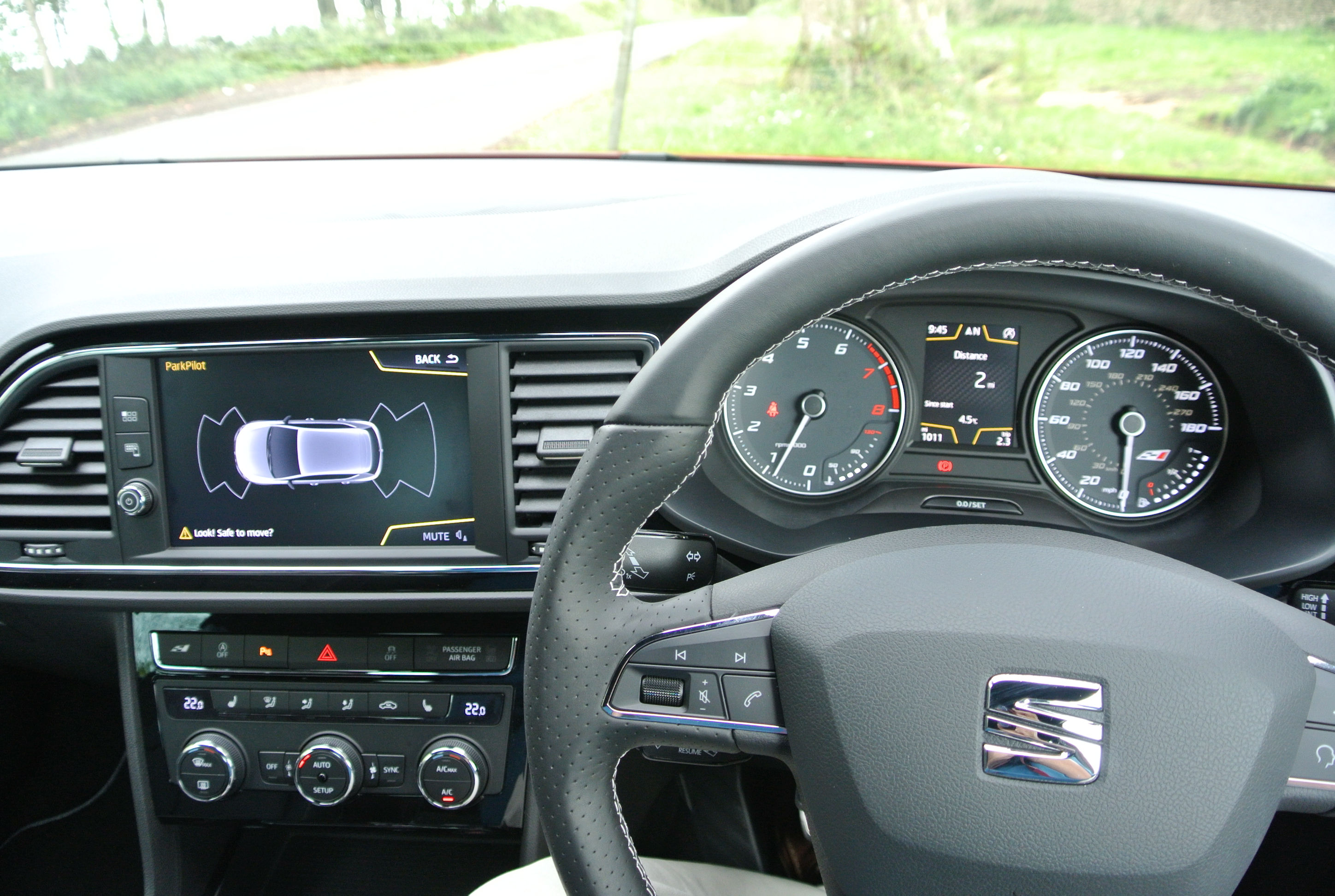 As far as equipment levels are concerned, there are inevitable parallels, as both cars, by apparent demand, need to provide in-cabin connectivity, which they do, as well as spec-dependent convenience equipment. The Cupra features some extras that you cannot obtain on the SE, although both cars have LED headlamps, an LED daytime running lamp signature, tinted glazing and broadly identical dashboard layouts and steering wheel switchgear. In fact, from the inside, you could be in either example, which might make you question the £11,425 retail price difference between them. After all, you could buy an additional, well-specified Seat Mii, were you to opt for the SE, for the same money as Cupra. It is a proposition worth contemplating.

In terms of drivability, or driver enticement, the Cupra has the performance kick licked. It is delightful and incredibly engaging, aided by speedy, responsive steering and whip-crack gearshift and brakes, which make the car feel, if anything, slightly over-braked. Were you so inclined, you could commute during the week and take to a track-day at the weekends in the mildly bi-polar Cupra. It certainly delivers to expectations and has the added bonus of feeling unburstable. However, while living with it might seem thrilling, we reside in a society that frowns upon boy-racers, with recent legislative changes (surrounding speeding offences) that are set to outlaw the once sacred freedoms expressed in such personal transport. 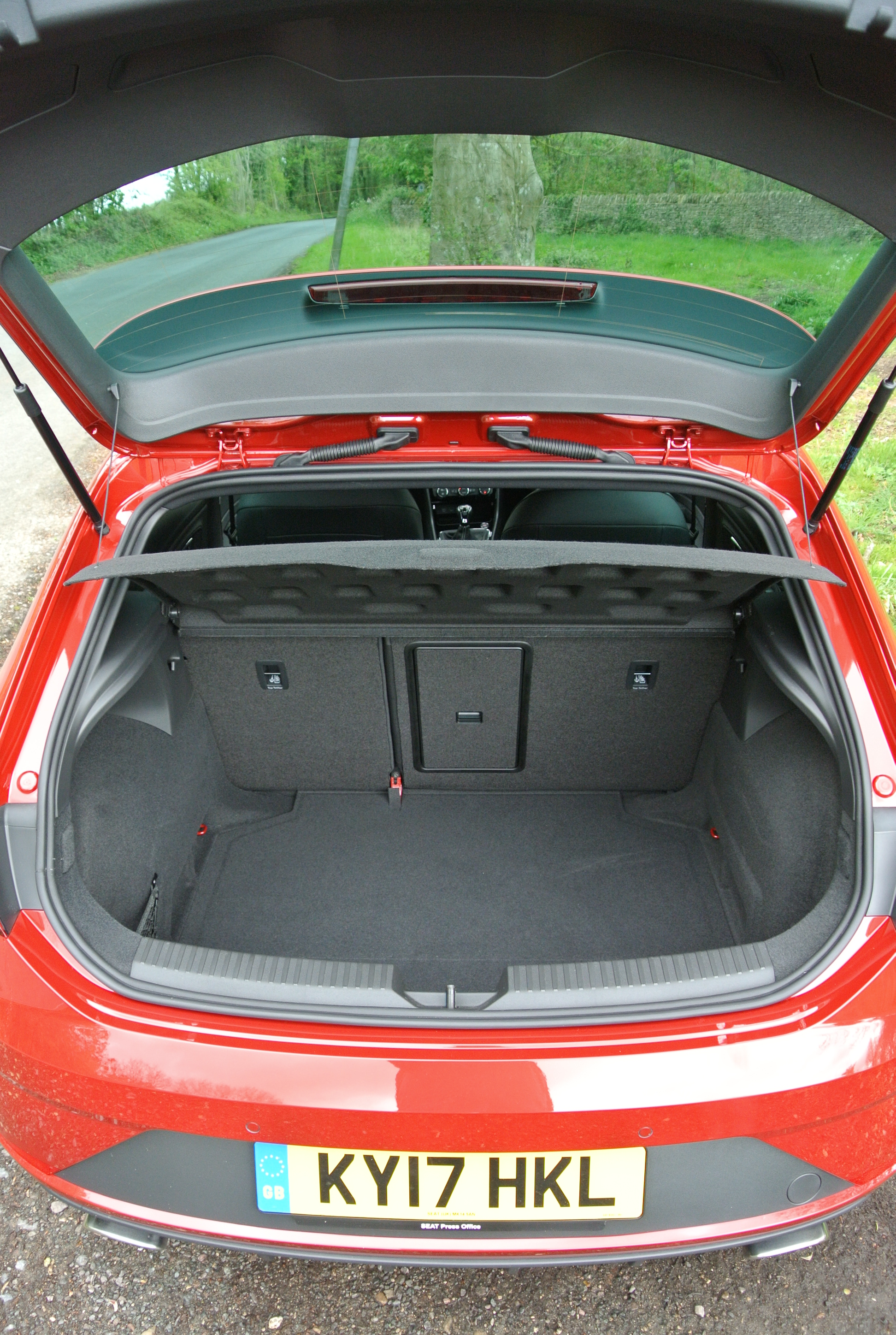 In many respects, complete with its offbeat engine sound, as opposed to the much racier soundtrack of the Cupra, the little SE actually delivers more. There is some twisted logic attached to enjoying the driving experience of a car with a modest power output. In fact, it is almost more engaging to punt the SE at somewhere close to its maximum potential, while the Cupra may seldom exceed 50% of its capabilities. Insert that into the mix and, once more, you start to question the price difference and even your own values.

Pitting little and large together was a real and rare treat, for which I ought to be grateful to Seat Cars UK. In truth, I would be happy to run either model, without a particular preference, although logic dictates that the smaller engine option makes immense sense in either private, or business motoring terms. Both cars are very impressive, for inevitably divergent reasons. As an arbiter of good taste, I would recommend the 1.0-litre SE, even though it is somewhat pricier than a value brand ought to be.