The only way, in engineering terms, is Up!, well, one of them anyway…

Amazingly enough, despite his stated fascination for ultra-efficient sub-compact cars, the last time that Iain Robertson sampled a VW Up! was at its original launch over four years ago; it was time to redress the balance.

To be fair, I must admit to a soupcon of bias. You see, I lease a Skoda Citigo, the Czech alternative to the VW Up!, which is also marketed in Seat guise as the Mii. It was driving the original Up! that convinced me to acquire an example of the badge-engineered breed. Its combination of an engaging 1.0-litre, three-cylinder petrol engine, within a truly solid body possessing VW build integrity, was compelling.

Yet, having been motivated by the BMW i3 sales proposition, the avant-garde but also ingenious petrol-electric hybrid, which would not actually be sold to anyone but leased to customers, I sought what has proved to be the most cost-efficient route to car use, in a modern idiom. Skoda was my route to achieving that state of grace around 27 months ago; the three years business contract ends later this year.

For me, ownership, or lack of it, was always going to be the psychological hump that I needed to scale. Using the BMW acquisition model, I could recognise the benefits of ‘non-ownership’, despite having always owned every vehicle I had bought previously. As custodian of the car, I would need to look after it, to ensure that, apart from normal ‘wear and tear’, I would not incur post-contract penalties, one of which would be excess mileage charges. Despite living outside the house in the driveway, it is cleaned regularly and looks, smells and feels as good as new, a factor that is as much due to the use of high quality materials in its construction, as any specific attention on my part.

The beauty is, I pay around £100 per month for the car, £97 for the annual fully comprehensive insurance and fuel costs, at an average of 54mpg (since the start). That’s it! I do not suffer the slings and arrows of vehicle depreciation, which might be substantial on a car of this class (even though it ought not be so) and I can hand it back to the dealer at the end of the contract and commence another lease programme, should I wish to.

When I ordered ‘my’ Citigo, it was laden to the gunwales, with every available option-box ticked, including privacy glass, heated front seats, cruise control, sat-nav and DAB stereo. My car, unlike the test Up!, is a three-door hatchback. However, as a proponent of VW’s exquisite DSG (twin-clutch, automated manual transmission), I also opted for the ASG (single-clutch) alternative, which I shall admit demands familiarisation but, once mastered, enables truly easy city driving. The bottom-line is that I love the car. I want for nothing. It is comfortable, frugal, fun and incredibly spacious. Pound for Pound it is the best small car I have ever driven, or lived with. 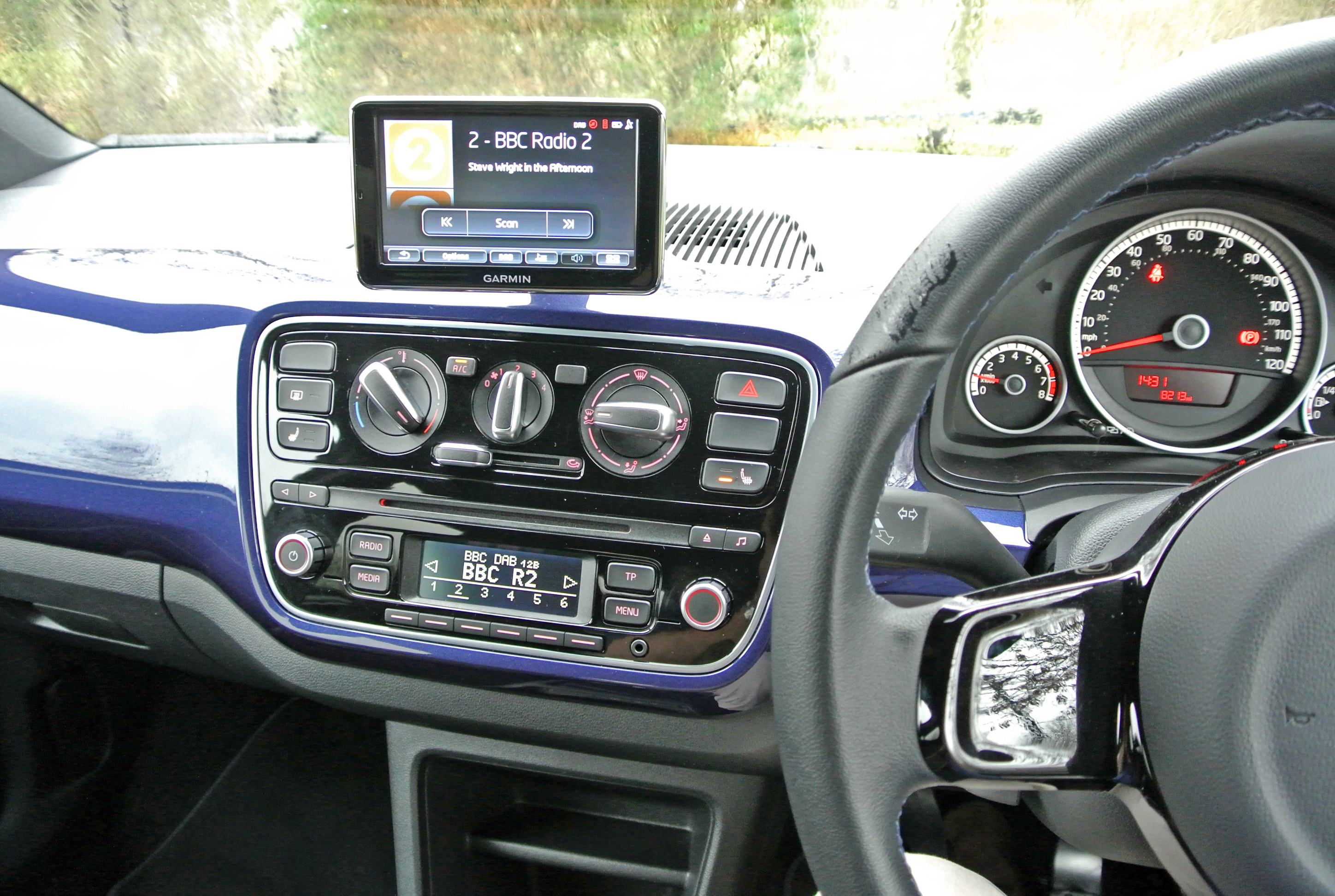 Therefore, sampling the latest version of the Up!, in this case in 5-speed manual Club trim, would be interesting for the sake of comparison. It is not ‘cheap’, at £12,485, despite being built at the VW Group plant in Bratislava, where labour rates are not as steep as they are in Germany. As a result, it does have several key rivals, starting with its own in-house versions, which are both around £500 less costly, model-for-model. VW feels that a premium is necessary for its ‘Roundel’. I do not share the company’s enthusiasm.

Set-off beautifully by a most attractive set of 16-inch diameter, ‘Triangle’ alloy wheels (one inch larger than those on my Citigo), clad in 185×16/60-profile tyres, the ride quality is unadulterated and remains as fluent as ever. One of the strongest markers of this model cluster lies in its large car dynamics, a factor that hikes it markedly above its main rivals, all of which tend to suffer from small car feel. The cheaper Vauxhall Viva is a case in point, as are both the Hyundai i10 and the Kia Picanto, which are also less costly. However, they all pale the similar PSA Group-produced Peugeot 108, Citroen C1 and Toyota Aygo models, which feel not only flimsy but also lacking in solid, driver-satisfying responses, even though they cost around the same. 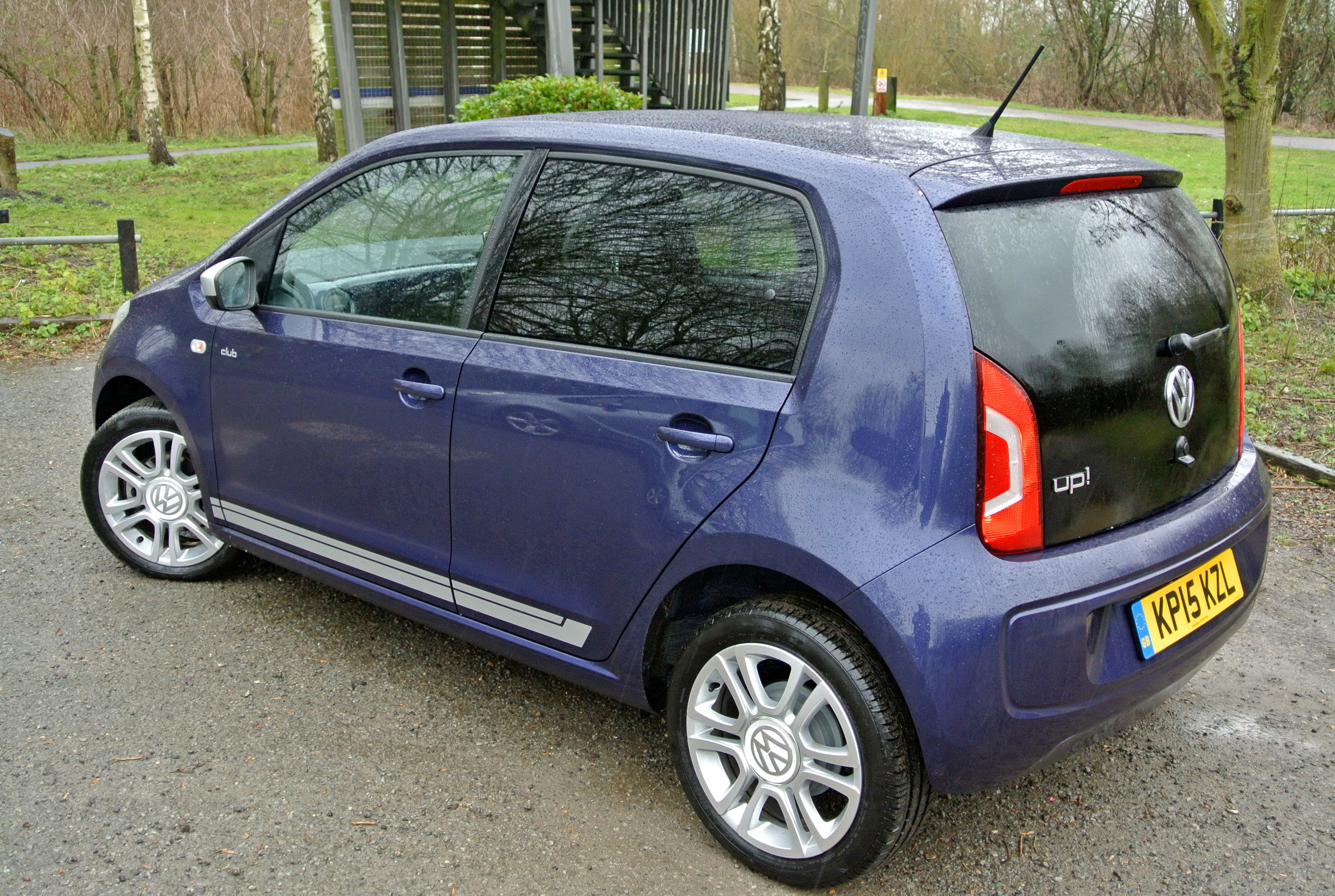 While the Up!’s interior is ‘plastic-fantastic’, its quality is unerringly high. Part of this lies in sharing switchgear and controls with other VW Group models higher up the range. One of the most impressive aspects is the deliciously assuring ‘thunk’ as the passenger doors are closed. None of its rivals boast that same, high build quality. The single instrument pod contains a large speedometer dial, a smaller rev-counter and a fuel contents gauge, aspects that link the Up! to its Beetle forebear, which also shared a sparse cockpit but fabulous, no frills solidity. The separate pod-mounted and removable sat-nav device also carries additional, digital instrumentation, the multi-media controls, on-board computer and a ‘Think Blue’ driving aid, which can help to focus the driver on a more ecological approach to motoring. Combined, they serve to maximise the value proposition.

Cabin access is superb, despite demanding extra space for the rear doors of this 5-door variant. It is much easier in my three-door but I never feel inconvenienced. However, a need for interior space means that the rear windows are of a simpler ‘flip-out’ type, as opposed to the electric conventionality of the front panes (the rear glazing on my car is fixed). Only the Korean twins offer electrics in the rear. Yet, transporting four large adults is possible in all of these cars, with the exception that the Up! feels by far the most accommodating. Its grey tartan cloth upholstery is both attractive and exceptionally comfortable, even for longer trips. 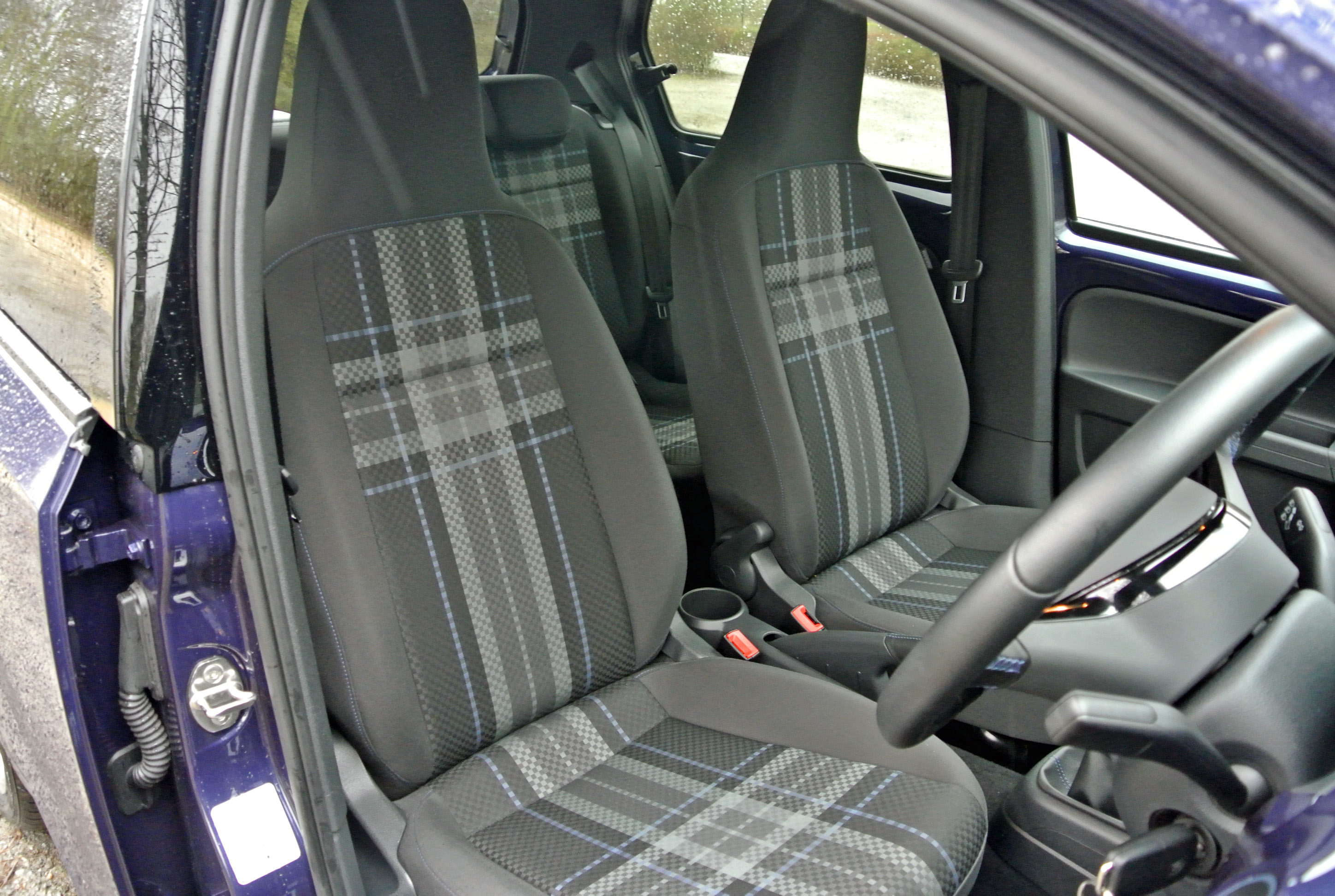 Externally, the car is exceedingly stylish and it is only when it is parked alongside cars of a class above that you appreciate the optical illusion that a relatively tall body gifts the Up!. The differences in stature are not as marked as you might think. Yet, the Up! weighs a ‘mere’ 929kgs, which makes it among the lightest of all steel-bodied motorcars. It also ensures that its tiny 1.0-litre engine delivers a more than surprising amount of urge. Two engines have always been available in this line-up, developing 57bhp or 72bhp, the punchier unit being fitted to the test car. Both share the same torque figure of 70lbs ft (between 3,000-4,300rpm), which means that they do need to be worked to obtain the best performance but, again, not as hard as you might think.

Despite having just five conventional forward gears to play with, the ratio selection is positive and sweet, the lever slotting speedily around the gate. At no time does the driver feel disadvantaged. The stated 0-60mph acceleration time of 12.9 seconds gives the impression of being quite modest, as the car actually feels a lot brisker. Its top speed is given as 106mph (I have witnessed 120mph on my car’s dial, aided by a gradual downhill). Interestingly, the lowest fuel return that I have attained on my Citigo is 42mpg (although its best was over 72mpg), following a particular fast trans-continental drive. VW suggests that 61.4mpg is achievable on the Official Combined cycle and, as I returned 59.4mpg without trying too hard, I think it fair to suggest that many owners will be able to exceed the stated mark.

Even though the fuel tank capacity is around 7.7 gallons, a comfortable range of well over 450 miles is well within bounds. Emitting 106g/km CO2 means that the Up! costs nothing in VED for its first year but just £20 annually thereafter (until the new rules come in next year). The car also falls into a lowly Group 5E for insurance purposes (intriguingly, my Citigo is rated at 2E, even less costly).

Living with a car in this class has been an eye-opening business experience for me. While I have always loved compact models, apart from an original Mini Cooper S, the Citigo version of the VW Up! is the only modern sub-compact that I have used for any length of time. As a two metres tall driver, I have never felt in any way inconvenienced by it. Its boot is roomy enough for the weekly shopping expedition and, despite a desire for a small amount of extra grunt (about 25-40bhp would serve purpose) that the turbocharged version of this petrol engine would provide, I never feel deprived in regular motoring conditions. 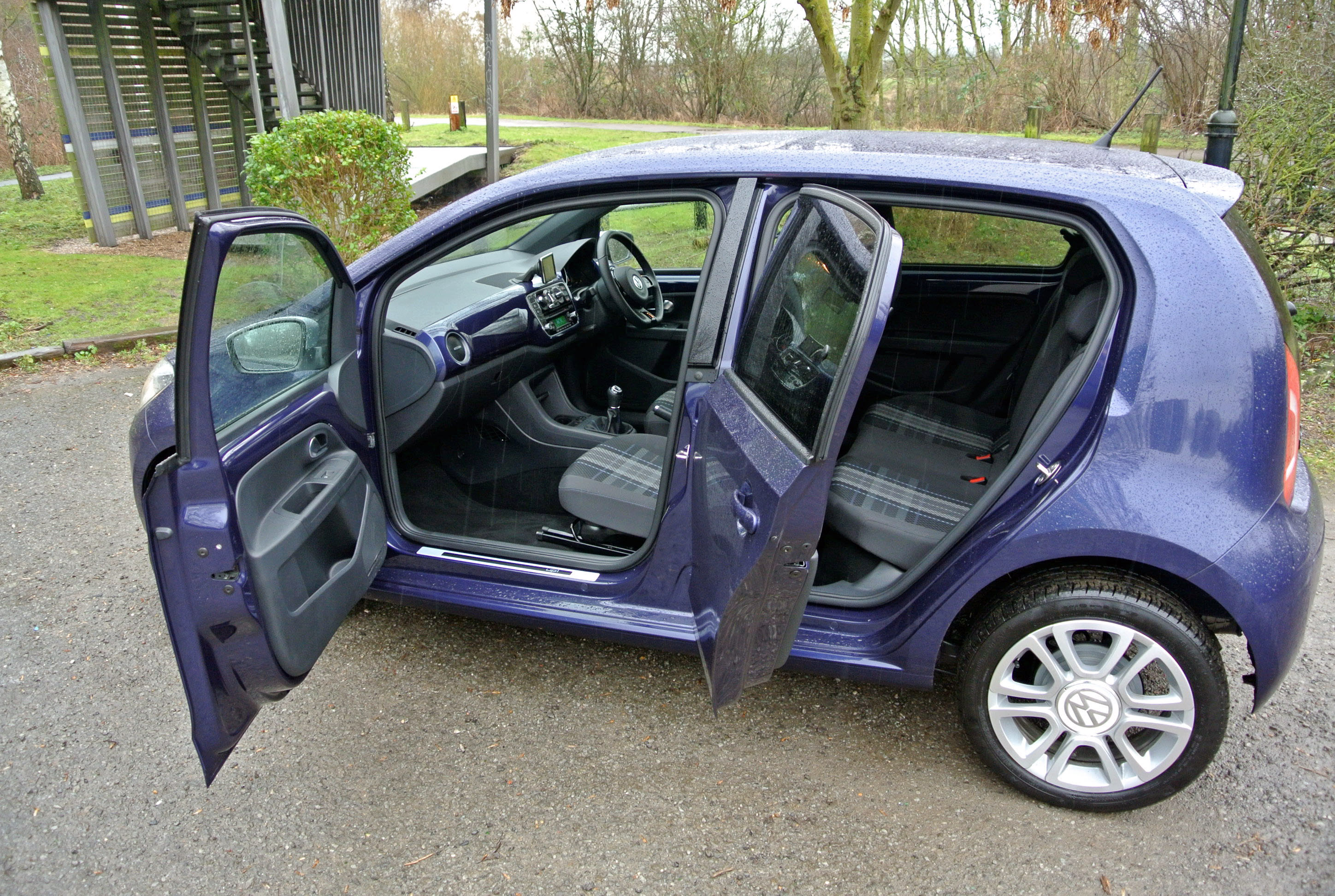 The VW Up! remains at the pinnacle of sub-compact engineering achievements. It has plenty of challengers for its crown but it is simply so well made that it cannot be beaten at present. However, I am currently going through the initial throes of contemplating my next personal car. While I might stick with the Skoda, mainly because I shall find it difficult to deal with higher fuel consumption and running costs with other cars, my dealer experience has denigrated in recent times. Therefore, I might consider a VW Up!, for all the right reasons. However, I am swaying towards a Merc A-Class at present, mainly due to the availability of another seriously low lease rate. Ownership is no longer on the cards but I feel that I shall need to reach my decision soon, because I fear that manufacturer-underwritten leases may soon become a thing of the past.